Cricket Australia has launched a parental leave policy designed to make it easier for players to start families and for mums to extend their careers.

The initiative, jointly developed by CA and the Australian Cricketers’ Association, is designed to support professional players through pregnancy, adoption, their return to play and responsibilities as primary carers.

It includes up to 12 months paid maternity and adoption leave, up to three weeks partner leave for both genders, provision for children up to age four to join parents on tour and safe spaces for breastfeeding at grounds. 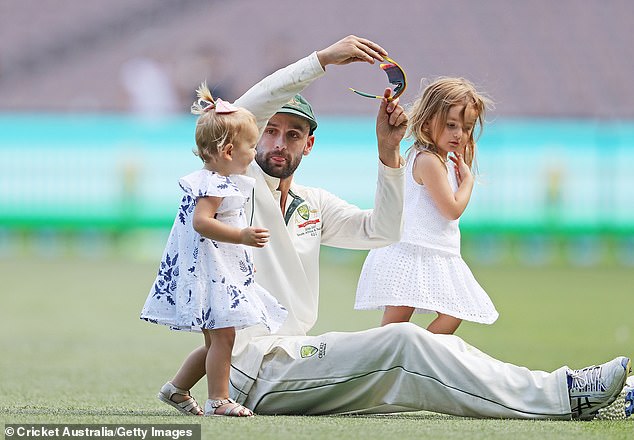 Cricket Australia has launched a parental leave policy designed to make it easier for players to start families and for mums to extend their careers. Nathan Lyon is pictured with his daughters Milla and Harper

Under the scheme, players who fall pregnant can transfer to a non-playing role until they give birth and be eligible for 12-months paid parental leave.

They will also be guaranteed a contract extension for the following contract year, in line with their contractual arrangements.

Players who have a partner who gives birth will be entitled to three weeks paid leave, while at any time after giving birth, a player can return to the game subject to medical clearance.

The policy also includes travel support for players who are primary carers including flights, accommodation and other expenses for the child and a paid carer until the child turns four.

‘Seeing friends and family raise children, I know the physical and emotional toll parenting can have. The policy is a game changer for players planning for the future while providing job security,’ prominent women’s player Alyssa Healy said on Friday.

‘This policy is funded by the players, for the players for the future of the game.’