Shanghai/Beijing: China's Qingdao city says it will conduct COVID-19 tests for the entire population of more than 9 million people over five days after new cases appeared linked to a hospital treating imported infections.

The city reported six new COVID-19 cases and six asymptomatic cases on October 11. Most of the cases were linked to the Qingdao Chest Hospital. 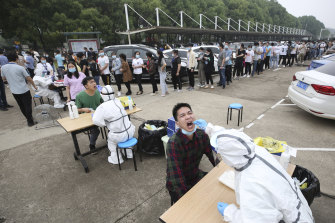 Workers line up for a coronavirus test at a large factory in Wuhan in May.Credit:AP

The National Health Commission's (NHC) tally of 21 confirmed COVID-19 cases in mainland China for October 11 was published after Qingdao's announcement, but did not include any confirmed infections in the city and it was not immediately clear why. 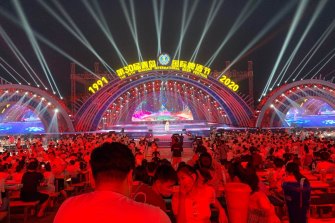 Qingdao had largely returned to normal before the latest outbreak, with locals celebrating a beer festival in August.Credit:Michael Smith

Daily COVID-19 infections in mainland China have fallen drastically from peaks early this year, but the country remains on high alert in order to prevent painful lockdowns that led to an outright contraction of the world's No. 2 economy.

Qingdao has already locked down Qingdao Chest Hospital as well as the emergency department of its central hospital. Buildings that the infected individuals live in have also been locked down as part of the virus containment measures.

The total number of confirmed COVID-19 cases in mainland China now stands at 85,578, while the death toll remained unchanged at 4634.

Our weekly newsletter will deliver expert analysis of the race to the White House from our US correspondent Matthew Knott. Sign up for the Herald‘s newsletter here, The Age‘s here, Brisbane Times‘ here and WAtoday‘s here.