China warned yesterday that Britain was heading down the ‘wrong path’ ahead of Dominic Raab announcing the suspension of an extradition treaty with Hong Kong.

The Foreign Secretary pulled the reciprocal arrangement and also extended an arms embargo with China to the formerly autonomous city following Beijing’s imposition of a new national security law.

‘We urge the UK not to go further down this wrong path, in order to avoid further damage to China-UK relations,’ Wang said. 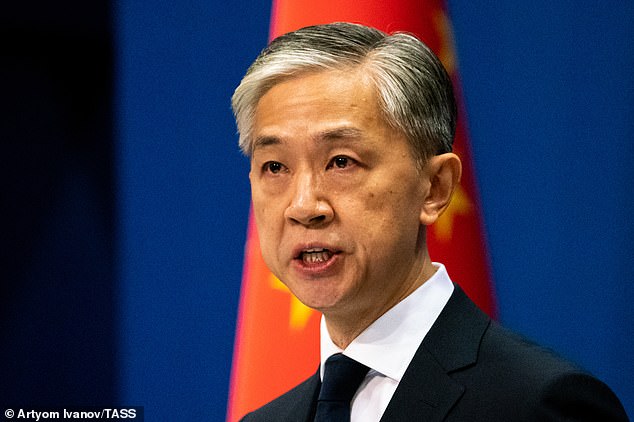 Wang Wenbin, spokesman for China’s foreign ministry, told a regular press briefing that Beijing would ‘firmly counter’ any interference in its internal affairs, also slamming suggestions it was mistreating minorities in Xinjiang as ‘slander’ 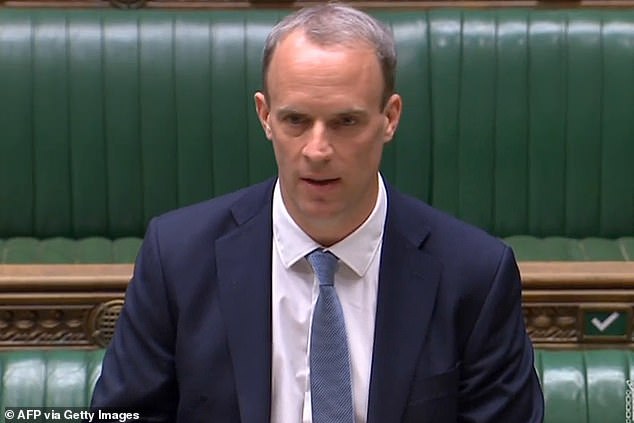 Why is the UK suspending its extradition treaty with Hong Kong?

China imposed a new national security law on Hong Kong at the end of June this year.

The controversial legislation criminalises secession, subversion and collusion with foreign forces but also curtails rights to protest and freedom of speech.

Crucially, the rules apply outside the borders of China.

This has stoked fears Beijing could try to use the extradition mechanism to drag any overseas residents involved in pro-democracy activism back to Hong Kong.

The UK does currently have an extradition treaty with Hong Kong but it does not have one with China.

There are fears that people could be extradited back to Hong Kong to be unfairly punished.

Canada and Australia have both already suspended their extradition arrangements with Hong Kong with the US currently considering whether to also follow suit.

Mr Raab told MPs yesterday the extradition treaty with Hong Kong was being suspended ‘immediately and indefinitely’ because of concerns that the new national security law could allow cases to be transferred to mainland China.

The extradition treaty means that, if someone in Hong Kong is suspected of a crime in the UK, the British authorities can ask Hong Kong to hand them over to face justice – and vice versa.

The UK fears the arrangement – which has been in place for more than 30 years – could see anyone it extradites to Hong Kong being sent on to China.

An arms embargo with China that has been in place since 1989 will also be extended to Hong Kong, Mr Raab said.

Amid the diplomatic firestorm, US Secretary of State Mike Pompeo flew to Britain last night.

He will meet Boris Johnson and Mr Raab today, with the subject of China expected to dominate the discussions.

US sources said they will discuss ways to ‘deal with’ Beijing, including its ‘aggression’ in the South China Sea.

They will also look at alternatives to Chinese telecoms giant Huawei after Britain banned the firm from its 5G networks, and the ways in which the UK and US ‘can develop networks with trusted vendors’.

The new security law imposed by China on Hong Kong last month has drawn widespread criticism in London and elsewhere.

Britain’s Supreme Court president, meanwhile, suggested last week that the two British judges serving in Hong Kong’s Court of Final Appeal – under the terms of the territory’s handover agreement with China in 1997 – could stand down unless the rule of law was guaranteed in the semi-autonomous city.

Wang said Beijing would ‘oppose interference in Hong Kong affairs by outside forces’ and that judicial independence was ‘not affected’ by the new security law.

He also hit back at comments by Mr Raab that accused Beijing of human rights abuses against ethnic and religious minorities in the northwest region of Xinjiang.

Mr Raab told the BBC on Sunday that it was ‘clear that there are gross, egregious human rights abuses going on… it is deeply, deeply troubling.’

Wang called the comments ‘nothing but rumours and slander’.

‘The Xinjiang issue is not about human rights, religions or ethnic groups at all, but about combating violence, terrorism and separatism,’ he said.

Rights groups and experts estimate that more than one million ethnic Uighurs and other mostly Muslim minorities have been rounded up into a network of internment camps, which China says are facilities for job-training and to steer people away from extremism.

Mr Raab said reports of forced sterilisations and mass detentions in Xinjiang required international attention, and that Britain ‘cannot see behaviour like that and not call it out’.

But Wang said the forced-sterilisation reports were ‘complete nonsense’, and that the Uighur population had more than doubled in the past four decades.

Exiled Uighurs this month called for the International Criminal Court in the Hague to investigate China for genocide and crimes against humanity, filing a huge dossier accusing China of rights abuses including forcibly sterilising women.