Feline active! Stray cat rises to fame after appearing to ‘do crunches’ under a car in China

A little moggy has inspired people to hit the gym.

A hilarious trending video appears to show the white cat doing abdominal exercise under a car in a Chinese city by hooking its rear paws to the chassis and squirming its body up and down.

In a determined fashion, the feline, said to be a stray, repeatedly tried to move its head closer to its thighs, giving viewers an impression that it was doing crunches – a popular form of exercise to train one’s abdominal muscles.

The nine-second clip was uploaded onto China’s Twitter-like social media platform Weibo yesterday by an entertainment blogger, and was given upbeat, gym-style background music.

It has since received waves of comments as amused viewers joke how the cat has prompted them to do more exercise.

A top-rated comment on Weibo reads: ‘Even a cat can do crunches, and I can’t complete a single one…’ 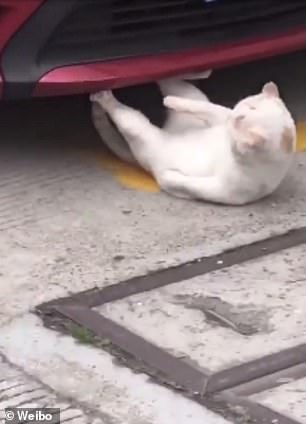 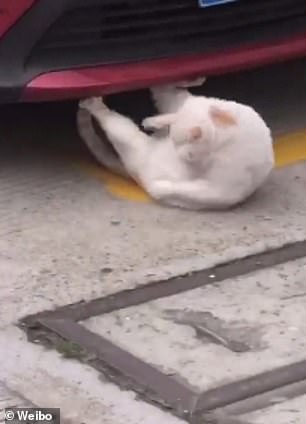 This little moggy has prompted social media users to hit the gym after being spotted apparently doing exercise in China. Experts say that the cat was likely trying to groom itself

Another user said: ‘[The cat’s crunches] were very precise, not all of its back touched the ground.’

A third person urged other viewers to stay fit like the moggy: ‘Even a cat works out this hard, is there any reason that you don’t?’

One fan of the video told MailOnline that the animal was a stray cat in Jiaxin College in eastern China’s Zhejiang Province.

While the cat’s action may have impressed social media users greatly, animal experts explain that the moggy was simply trying to clean itself. 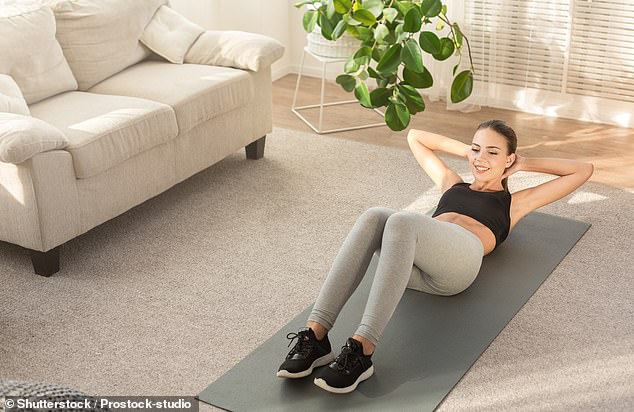 Janetta Smith, a cat behaviourist based in Britain, told MailOnline that it was common for any wild or domestic cat to lie on its side or back and lick its belly area.

She said: ‘When cats groom on their side and/or back their back feet do tend to kick out, the clever cat in the video seems to be using the car chassis to lean against to give it more stability.’

Joanne Hinds, another cat behaviourist from Britain, agreed that the cat was attempting to groom itself after viewing the trending video.

She added that in the clip the cat appeared overweight, therefore the animal might have found the position easier for it to groom its underneath.