Carpet fitter, 27, whose comedy videos drew large online following died after clinging under lorry for two miles while high on drink and drugs and getting run over when he fell off

A carpet fitter whose comedy videos drew a large online following died after clinging under a lorry for two miles while high on drink and drugs and getting run over when he fell off, an inquest heard today.

Simon McDonnell, 27, suffered fatal injuries after being struck by the HGV he had been clinging onto on August 16 last year.

The ‘once in a lifetime character’ had a substantial online following due to his comedy videos. 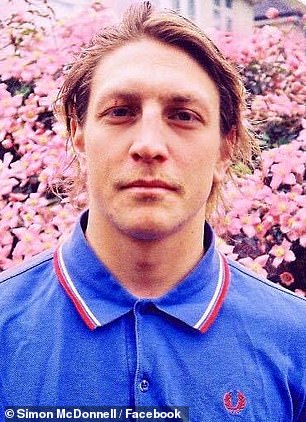 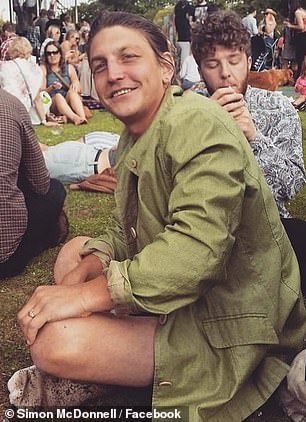 Simon McDonnell, 27, suffered fatal injuries after being struck by the HGV he had been clinging onto on August 16 last year. He is pictured from photos on social media

But on the night of his death Simon had drunk a ‘significant’ amount of alcohol and had cocaine in his system, Gloucester Coroners Court heard.

Mr McDonnell, from Cheltenham, managed to cling to the fuel tank underneath the white Mercedes Antos lorry for more than two miles, before losing his grip and being hit.

Hundreds of mourners attended the carpet fitter funeral on September 14, as family members described him as a ‘Peter Pan’ figure who ‘never wanted to grow up’.

Senior coroner for Gloucestershire Katy Skerrett recorded a verdict of death by misadventure.

She said there was a ‘significant’ level of alcohol in Mr McDonnell’s body, 283mg per 100ml of blood – with the legal limit for driving being 80mg.

She added the alcohol was not a fatal amount but was ‘very high’, while there was also a ‘significant amount’ of cocaine in his system.

CCTV footage from the night that Mr McDonnell died shows him approaching the HGV driver Tomasz Kalmuk at around 1.46am in Cambray Place in Cheltenham.

Collision investigator PC Phil Reese told the court: ‘There appears to be some form of very short conversation. Mr Kalmuk does not recall this.

‘Mr Kalmuk is at the rear of the vehicle loading and unloading. Mr McDonnell walks to the side of the Mercedes.’

PC Reese said Mr McDonnell climbed under the lorry without being seen by Mr Kalmuk, who then drove it away. 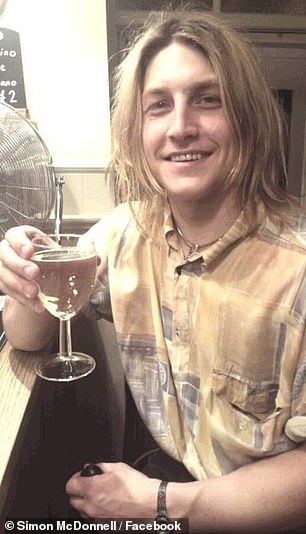 CCTV footage from the night that Mr McDonnell (pic) died shows him approaching the HGV driver Tomasz Kalmuk at around 1.46am in Cambray Place in Cheltenham

He held on for more than two miles, as the Mercedes travelled onto the A40.

Then, he fell from the underside as the vehicle approached the A40’s junction with Benhall Avenue and sustained fatal injuries.

The lorry, owned by a business called Enterprise Rental, was stopped by police in Newport the next day.

PC Reese said: ‘It was only that day when questioned by police that Mr Kalmuk became aware something might have happened.’

Recording her verdict, Mrs Skerrett said: ‘What is clear is he has sustained overwhelming, unsustainable-with-life injuries.

‘I agree with pathologists that all the injuries are explained by the mechanism of being carried and run over by a HGV.

‘It is clear the driver of the vehicle had no idea the tragic incident unfolded. What is relevant is the high levels of alcohol and drugs in Mr McDonnell’s system.

‘It is likely this would have affected his sense of risk and the tendency to put himself at risk by taking the actions he did.’

At his funeral in September, hundreds of mourners heard moving tributes paid to him. In a moving eulogy, his older sister Caroline said he was ‘Peter Pan’.

She said: ‘He never wanted to grow up. If I only had one word to sum Simon up it would be ‘fun’.

‘He was also infectious, charming, kind, unique, a real cheeky chappy, one of a kind and, as he would say, the most handsome chap in Cheltenham.

‘He lit up a room with his smile. He really did live his life to the full, in a care-free way.’ 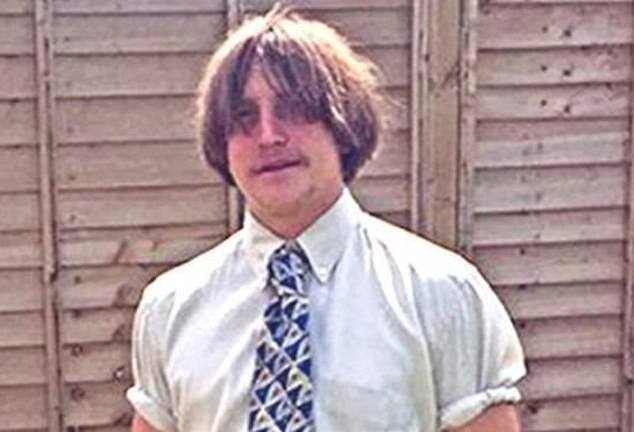 Mr McDonnell (pictured) was described as ‘like the world’ to his parents Jim and Sue, as well as a ‘best friend’ to his siblings Stephen and Christine

She added: ‘I don’t think he had a cruel bone in his body. He was the guy you would hug rather than shake his hand.

‘He will be remembered forever, a true legend. Only once in a lifetime does someone like Simon come along.’

Mrs Skerrett said during her eulogy that Mr McDonnell was ‘the world’ to parents Jim and Sue, as well as a ‘best friend’ to his siblings Stephen and Christine.

‘He was so lucky to have the friends he had. He loved football from a very young age, until he was a bit older and it wasn’t fun for him anymore.

‘Then he loved music. He always had his player blaring. I would enjoy watching him play his guitar.’