Months after supporters of now-former President Donald Trump stormed the U.S. Capitol, debunked conspiracy theories about who was behind the insurrection continue to circulate on Facebook.

That's according to new research from Avaaz, shared exclusively with USA TODAY. The online activist network found that, in 2021, the two dominant misinformation narratives about the attack on Facebook and Instagram were false claims that anti-fascist activists "infiltrated the crowd and incited the insurrection" and that the FBI played a role in the violence.

Between January and October, researchers found 116 posts and 31 articles on Facebook and Instagram that contained the debunked claims. Together, they generated nearly 1 million likes, shares and comments, according to the Avaaz analysis.

The Avaaz findings come amid a bipartisan investigation into the Jan. 6 insurrection, as well as congressional testimony on the role that Facebook played in the attack.

Over the past few weeks, the House select committee investigating the Capitol riot has issued subpoenas to far-right groups, former Trump advisers and organizers of the "Stop the Steal" movement. The committee has also demanded records related to the insurrection from technology companies like Meta Platforms, which owns Facebook.

"At this point, Facebook is working with us to provide the necessary information we requested," Rep. Bennie G. Johnson, the Democratic chair of the committee, told "Face the Nation" in late October.

In a March congressional hearing, Meta Platforms CEO Mark Zuckerberg downplayed the company's role in the Jan. 6 insurrection, instead blaming Trump, the rioters and a "political and media environment that drives Americans apart."

But more recently, Frances Haugen, a former Facebook product manager turned whistleblower, accused the company of making internal decisions that contributed to the spread of misinformation after the 2020 election, culminating in the Capitol riot. 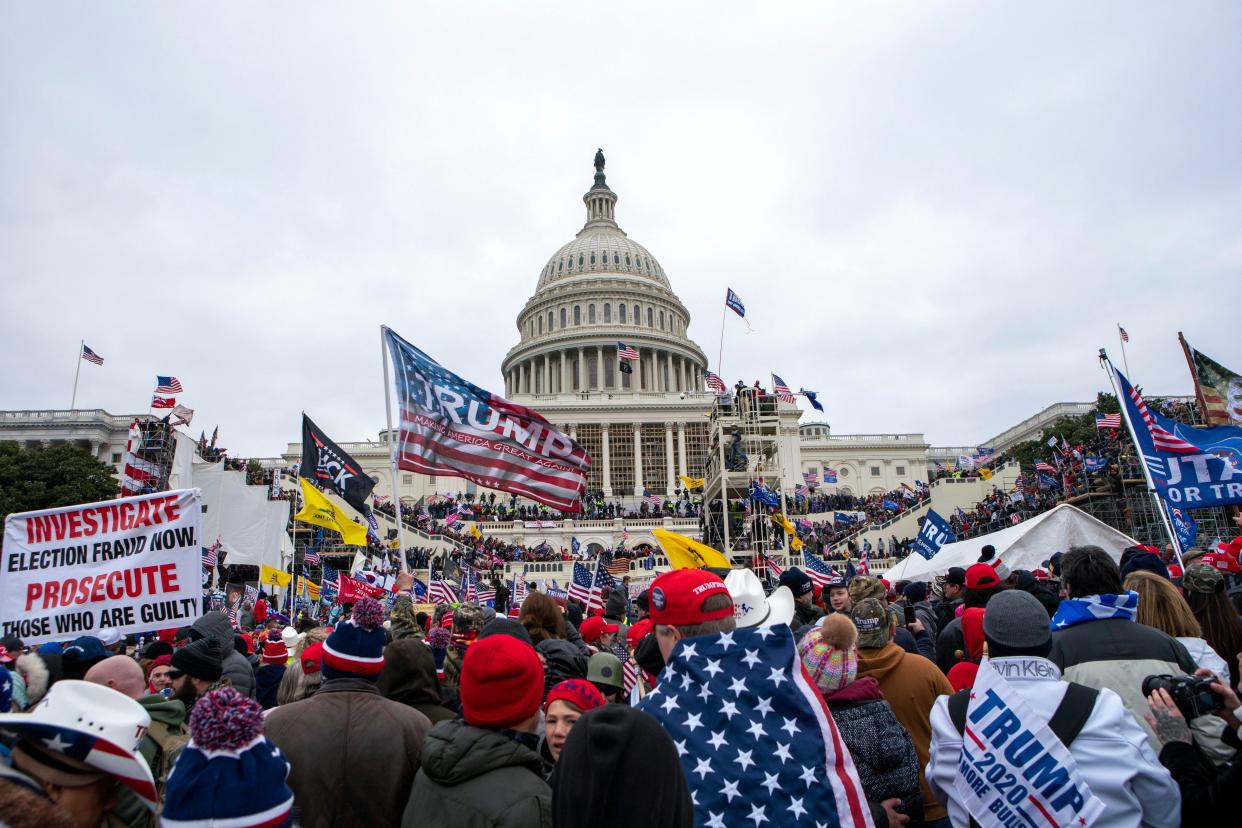 "Just as the Jan. 6 attack was organized right under Facebook’s nose, so too is the insurrection ‘truther’ movement that aims to undermine the critical investigation into the violence," Rebecca Lenn, a senior adviser at Avaaz, said in a statement.

Meta spokesperson Kevin McAlister pointed to steps the platform takes to combat misinformation, including in the weeks leading up to Inauguration Day.

“The responsibility for the insurrection lies with those who broke the law during the attack and those who incited them," McAlister said in an emailed statement. "Our approach for addressing false claims about the election includes fact-checking, labeling, removing and demoting content."

USA TODAY and other media outlets have debunked claims that the FBI or antifa activists were behind the Jan. 6 insurrection. But they remain popular online, according to Avaaz.

►'This deception must end now': Facebook gets letter from 500 health professionals demanding data on COVID misinformation

"For us, Jan. 6 was no coincidence – it was another painful reminder that what happens online doesn't stay online," Lenn said in a phone interview. "Not only did extremists use Facebook and other platforms to get people, to rally them in front of the Capitol building, these folks were radicalized by years of unchecked misinformation about rampant voter fraud and election-rigging online."

Dozens of fact-checking organizations and media outlets – including USA TODAY – work with Meta Platforms to combat misinformation on its platforms. If a publication debunks a Facebook or Instagram post, the company reduces the reach of the post and appends a label saying it contains false or misleading information.

Avaaz surfaced Jan. 6 misinformation by analyzing debunks from some of those independent fact-checking organizations, Kaitlin Hansen, who researches online disinformation campaigns for Avaaz, told USA TODAY. Then, the group found matching posts on Facebook and Instagram by searching for keywords on CrowdTangle, a social media insights tool owned by Meta Platforms.

According to Avaaz's research, only 21% of the posts it found promoting the FBI and antifa conspiracy theories had fact-checking labels applied – despite the fact that Meta Platforms' partners had debunked the claims. Facebook and Instagram retroactively removed nine of the posts Avaaz highlighted, Lenn said.

Of the posts researchers analyzed, 85% promoted a June claim from Fox News Channel host Tucker Carlson that "unindicted co-conspirators" mentioned in federal charging documents amounted to proof that undercover FBI agents or informants were involved in the insurrection.

"We saw that the antifa claims sort of fizzled out in the summer, in June, but the FBI claim is still going strong again with Tucker Carlson's 'Patriot Purge' documentary," Hansen said.

The three-part documentary, which aired in early November on Fox Nation, the network's subscription streaming service, suggests the Capitol attack was a false-flag operation aimed at purging Trump supporters in a "new war on terror." Two Fox contributors quit over the documentary, which also sparked bipartisan backlash in Washington.

►Fact check: What's true about the Capitol riot, from antifa to BLM to Chuck Norris

In a statement emailed to USA TODAY, Fox pushed back on Avaaz's research.

"It’s no surprise that a left-wing activist group co-founded by Moveon.org that has been highly criticized from across the political spectrum, including for making false claims and for lack of transparency, is behind this study," spokesperson Irena Briganti said in the statement.

While the posts Avaaz found in its research amassed nearly 1 million interactions on Facebook, Carlson's show attracts millions of viewers each night. Even so, both Facebook and Avaaz say Congress should pass comprehensive tech regulation, in part to better address the problem of misinformation on social media.

"Ultimately, no private company should be deciding where to draw these lines alone in a free society, which is why we’ve been asking for updated internet regulations set by democratically-elected leaders for years and will continue doing so," Meta Platforms' McAlister said.

USA TODAY shared Avaaz's findings with the House select committee investigating the Jan. 6 attack. The committee did not return a request for comment.