A BUSKER has been left covered in blood after five police officers tackled him to the ground following an apparent illegal performance.

In a video taken by an eye-witness, the busker with long hair can be seen still holding his guitar as he lays on the ground wounded while being restrained. 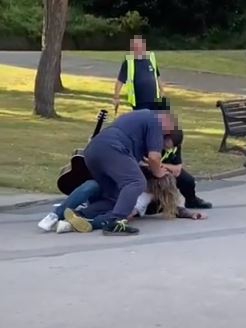 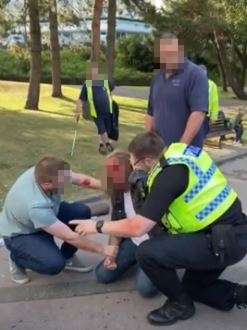 Shocked members of the public pleaded with one officer to let the busker go as blood was streaming down his face.

The busker, who appears to be in his 40s, repeatedly yells "I'm sorry" and asks for his guitar back.

The video later shows the policeman is joined by four colleagues who pin the bloody man to the ground.

One officer places his knee on the suspect's upper back to hold him down while another appears to jab him with a punch.

Police called for an ambulance to attend the scene in Bournemouth's Lower Gardens in Dorset.

The busker was arrested on suspicion of assault following the incident that took place at 3.30pm on Saturday.

Witness Jak Riley, 57, said: "He wasn't a bank robber or carrying a knife or even trying to run off. I can't imagine for the life of me what warranted the response from the police.

"Whatever the busker did or said did not warrant an overt use of such brute force."

A spokesman for Dorset Police has confirmed that the busker had been asked to move on from Bournemouth's Lower Gardens as he was playing without the required permission.

He said: "The man reportedly became aggressive and assaulted the member of council staff by pushing him several times.

"The officer went to intervene and attempted to restrain the man, but it was reported that he resisted arrest and refused to comply with the officer's requests.

He confirmed that the man was taken to hospital for treatment to a head wound, and officers have acknowledged the complaints received about the way officers dealt with the arrest.

Chief Superintendent Mark Callaghan, local policing commander, added: "Officers on the frontline face a difficult job when dealing with situations of this nature on their own and assessing the actions required to ensure the incident does not escalate." 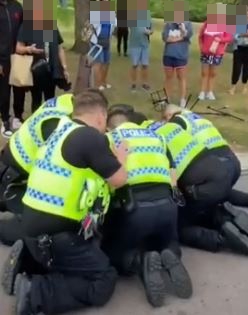 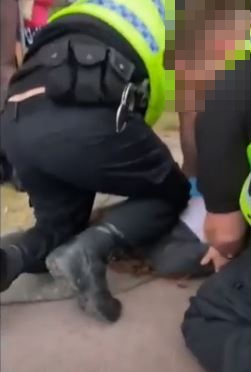