With its cricket club, thatched cottages and 13th century church, it is a picture-postcard village.

Now the residents of North Moreton in Oxfordshire have proved it is as welcoming as it is pretty – by offering accommodation for 50 Ukrainians.

The move would see refugees fleeing the Russian invasion invited to stay at villagers’ attractive homes including a Grade-II listed former rectory, a farmhouse and a barn conversion.

If the kind-hearted bid succeeds, it would also amount to the rural village becoming what would surely be Britain’s most scenic refugee camp. 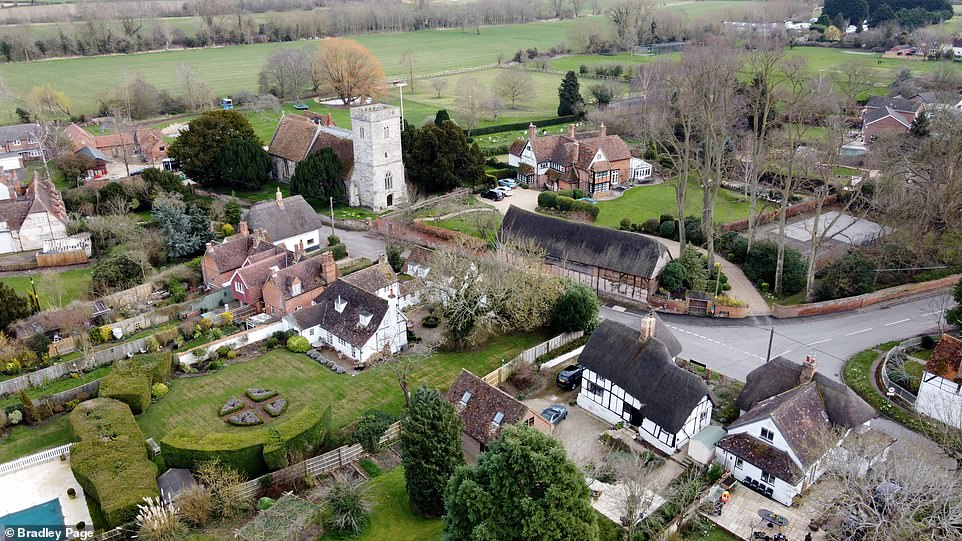 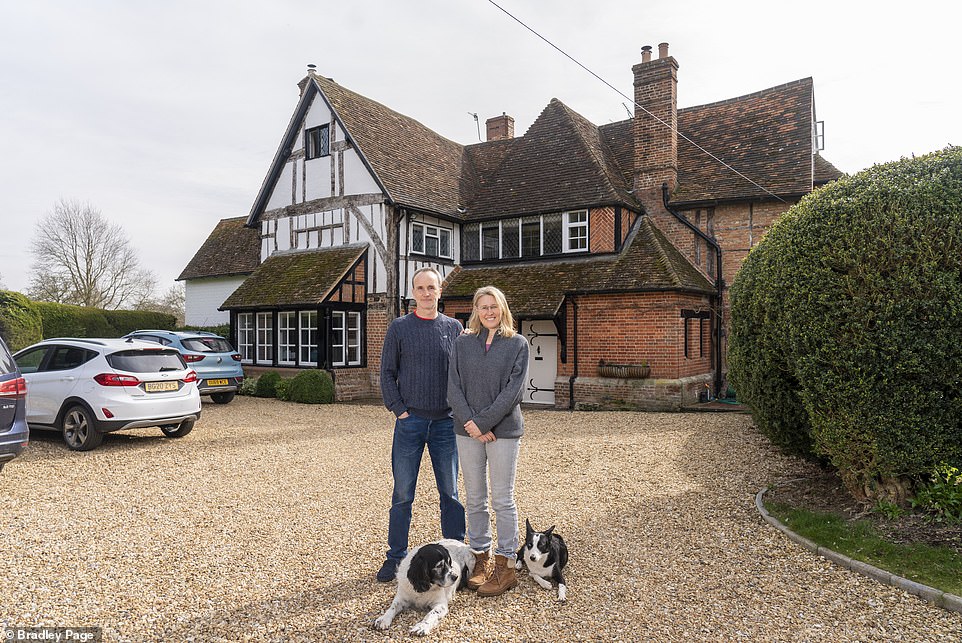 We’ve got power to help: John Stuart, 53, an investor in renewable energy, and his wife Joanna, 51, live in the village’s former rectory, part of which dates back to 1530. The couple, who have four children, are offering a space with a bedroom, shower room, lavatory and living room in the attic level of their Grade II-listed home. Mr Stuart’s work has included a project to build a windfarm in Ukraine in the district of Zaporizhzhia, where the nuclear plant was attacked by Russia earlier this month. He said: ‘I know people out there and unfortunately have been hearing first-hand what’s going on. Having that connection and the space here, it’s very easy for us to be able to help.’ 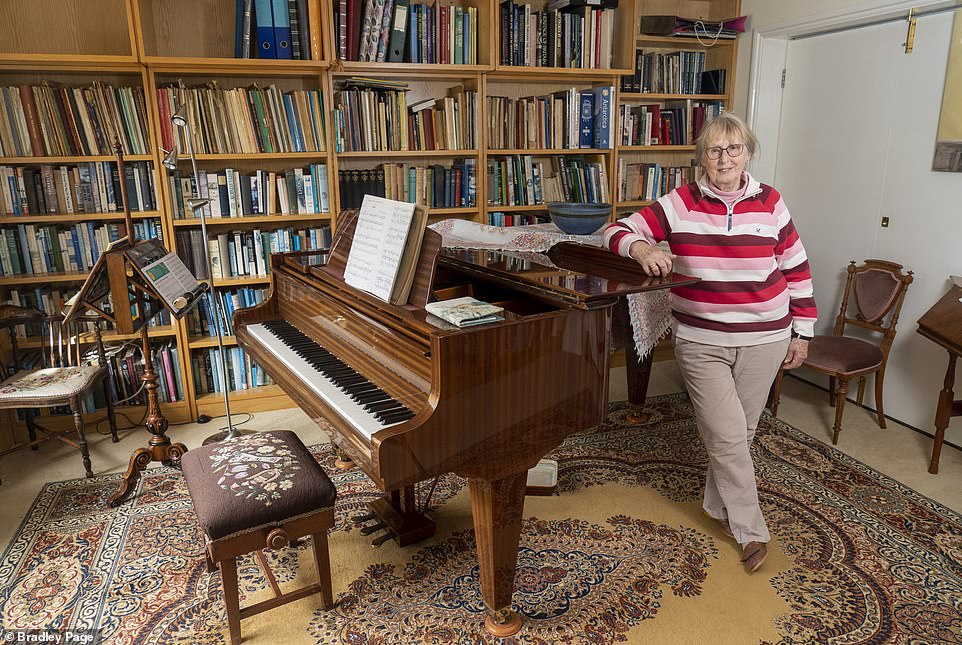 Granny’s flat ideal for kids: Project co-ordinator Polly Vacher, 78, and her husband Peter, 79, a retired printing firm boss, have lived in their large 1970s bungalow on a 140-acre arable farm in the village for 16 years. They are offering their granny flat with a double bedroom, living room with space for camp beds, its own bathroom, kitchenette and front door, and think it would be ideal for a mother and children. Grandmother-of-five Mrs Vacher said: ‘We have an amazing village here, the camaraderie and community spirit is incredible. We have applied as a community to bring a group of Ukrainians in. We feel if there is a group in one place it would be much better for them. ‘You can walk round the village in five minutes so they could visit each other easily.’ 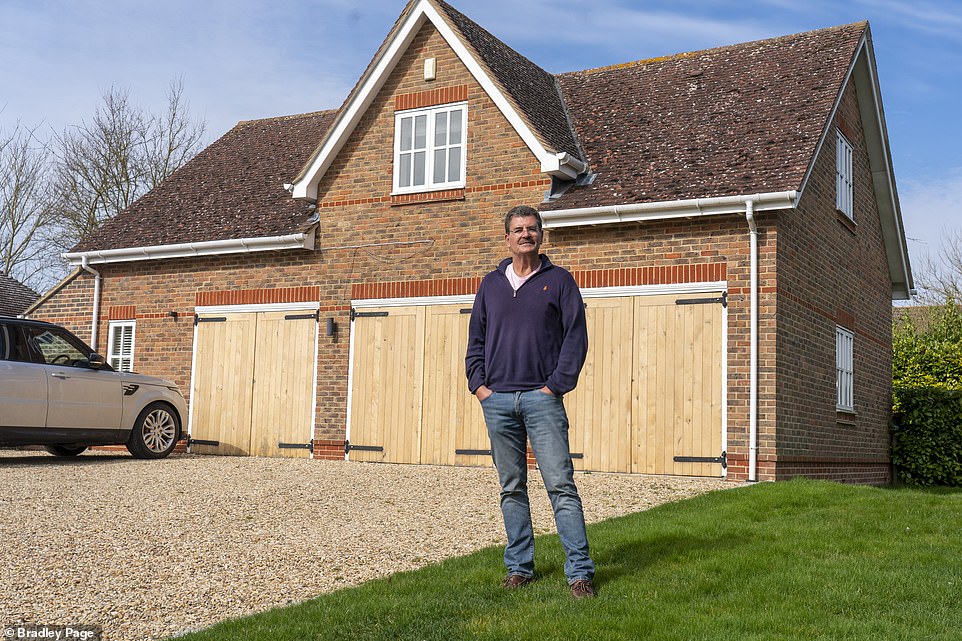 Instinct is to give support: Chris Gibson, 67, and his wife Jacquie, 70, are offering up their spare double and single bedrooms at their detached bungalow. The couple, who have lived in the village for 23 years, have both been touched by the ‘horrendous’ scenes in Ukraine they have watched on the news. Mrs Gibson admits to sometimes even being reduced to tears. Her husband, a retired wheelie bin cleaning company owner, said: ‘The displaced have nowhere to go and don’t know where they’re going. So if we can do anything to help we will.’ Mrs Gibson said: ‘What Russia’s doing in Ukraine is inhumane. It makes me cry, I can’t find the words for it. It’s great our community is coming together to help.’

Record-breaking aviator Polly Vacher, who lives in North Moreton and is co-ordinating the initiative, said: ‘It’s a small place with a big heart.

‘But the refugees are more important than any of us. If you put yourself in their shoes and it was us being bombed, we’d be grateful for families to take us in. So why wouldn’t anyone want to help?’

Mrs Vacher, a former music teacher who became an amateur pilot aged 50, has flown solo around the world twice in a single engine aircraft and over the North Pole and the Antarctic.

The village near Didcot has a population of around just 350 living in 157 properties. The average sold price for a property there was £677,500 last year – well above the national average – while detached homes sold for £1million or more, according to property website Zoopla.

A round-robin email in the close-knit community has already resulted in offers of accommodation from 16 households – with enough space for 50 Ukrainians between them – in under a week.

They are also formulating a plan to use the village hall as a community centre for the refugees. The hall could also serve as a classroom for Ukrainian children with lessons given by around seven retired teachers living in the village if they can’t get into nearby primary schools. 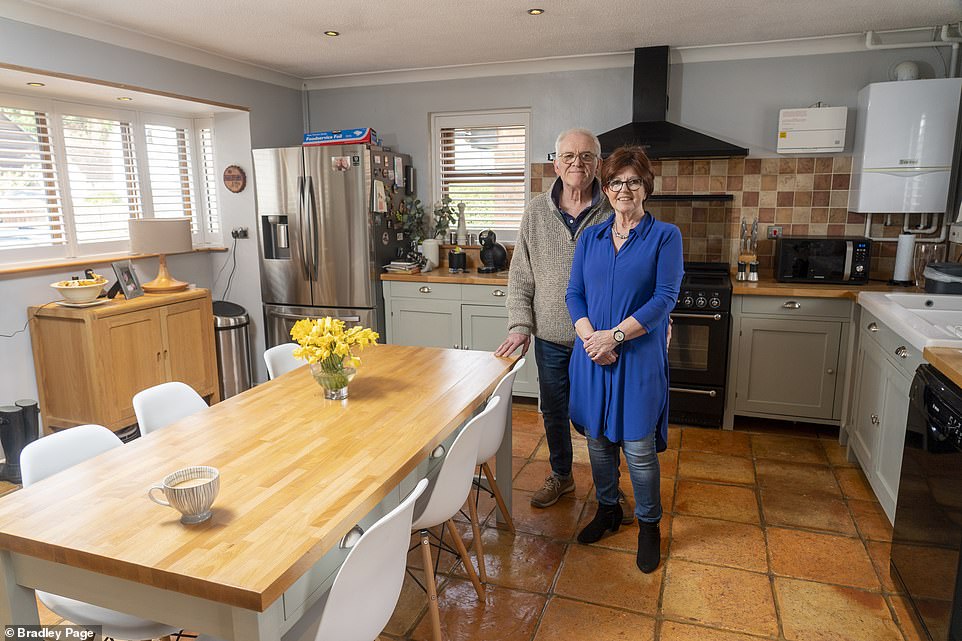 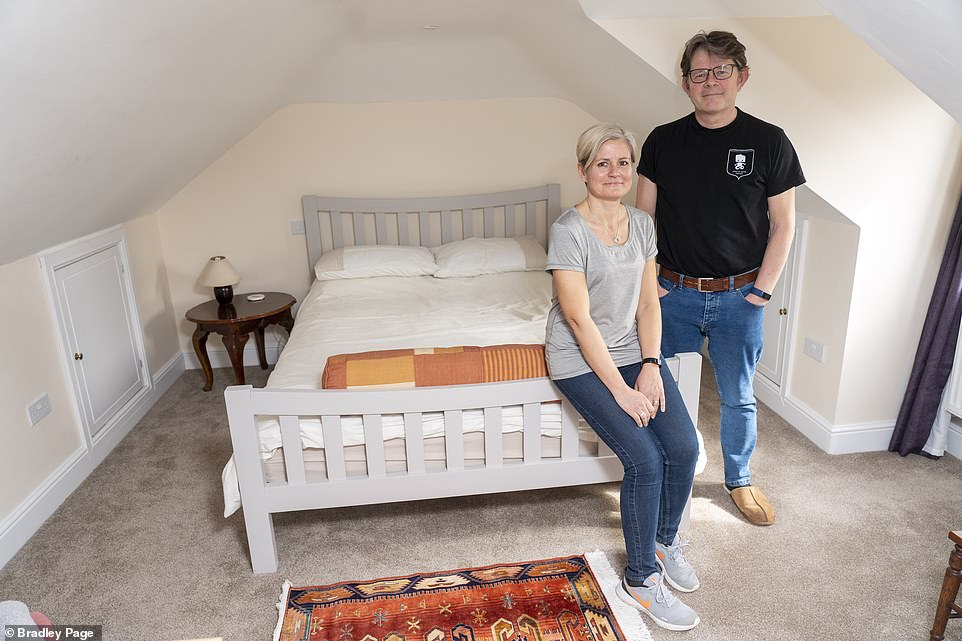 Easy decision to make: Duncan Murray-Clarke, 52, and his wife Emma, 51, run an advertising agency and a publishing company and are offering the furnished extension above their garage. Mr Murray-Clarke said: ‘We had a chat about it a couple of weeks ago and thought we ought to do something. We have the space so it was an easy decision to make.’ Mrs Murray-Clarke called Russia’s attack on Ukraine an ‘atrocity’ and said their sons Harris, eight, and Billy, 14, understand what’s happening there too. ‘They are concerned and very mindful of the situation,’ she said. ‘Harris said we could have people living here, which was surprising and lovely.’ 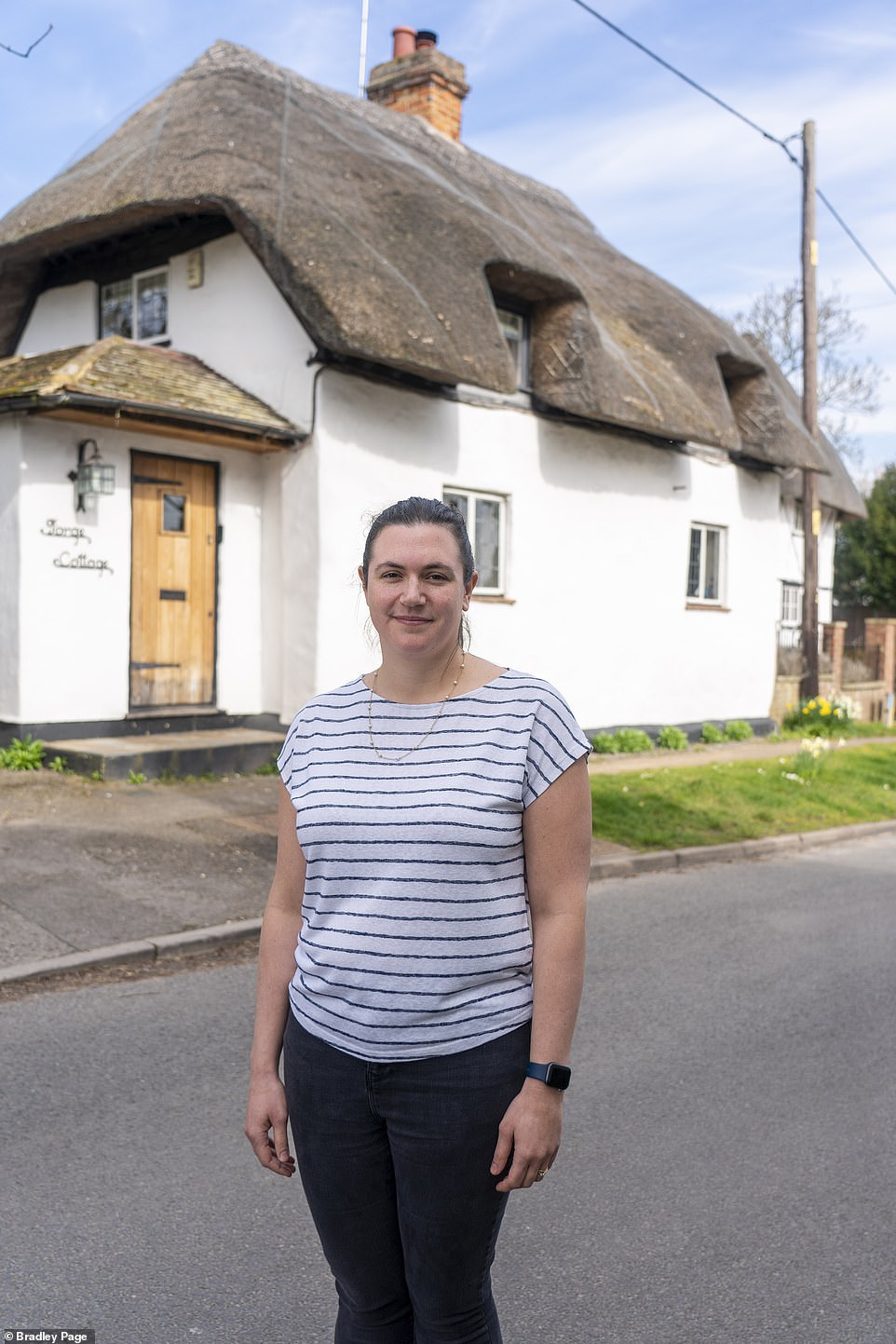 Example for children: Alice Channer, 33, an accountant, and her husband Ed, 35, a programme manager for an international development consultancy, live in a thatched cottage dating back to 1650. They converted a garage into a home office, complete with shower room and kitchenette, while working from home during lockdown and think it could comfortably accommodate an adult and two children. Mrs Channer said: ‘I want to do something useful. I can easily work in the house instead if I have to and the space can be put to good use for someone with nowhere to live. We’re lucky to be in such a lovely village, so I hope doing this will set a good example to our kids, Freya, four, and one-year-old Joan.’

Roger Haycock, 83, a former chairman of the parish council who worked in a managerial position at the Exxon group, the chemical arm of Esso, came up with the idea of using the village hall.

He said North Moreton ‘has a long-term record of giving tremendous support to projects’, adding: ‘If placing a group of Ukrainians is going to work anywhere, it will work here.’

The village has a pub called The Bear Inn, the Moreton Cricket Club – known as MCC like its more famous counterpart – and a church, All Saints, which has been described as one of the country’s most perfect medieval churches.

But despite the villagers’ eagerness to help, they are frustrated by the UK government’s ‘Homes for Ukraine’ scheme. Its first phase lets UK sponsors nominate a named Ukrainian or a named Ukrainian family to stay with them, but the villagers want the system sped up for communities offering to take in groups.

Yesterday, David Johnston, their Conservative MP for Wantage and Didcot, said: ‘I’ve talked to my Government colleagues about this and it’s my understanding the scheme for groups should be live in a week or so.’