LONDON — British Prime Minister Boris Johnson faces a vote on Monday that could remove him from power as a growing number of lawmakers in his own ruling Conservative Party turned on their leader after months dominated by scandal.

The vote, which is due to be held between 1 p.m. ET and 3 p.m. ET, was triggered after dozens of Conservative lawmakers submitted letters of no confidence in his leadership.

If he loses, Johnson will be out.

The prime minister has caused fury across the country after the revelation of a string of Covid lockdown-busting parties inside his No. 10 Downing Street residence and office over the past two years. He and dozens of others have been been fined by police for the parties — having previously denied breaking any rules.

It is a remarkable situation for Johnson, less than three years after he secured a Brexit deal with the European Union, swept to victory in a 2019 election and garnered predictions that his rule could last a decade.

But the nationwide anger has crucially divided Johnson’s Conservative Party, many of whom are worried about polling that suggests the ‘partygate’ scandal has caused millions of voters to turn against them.

The government has awoken with this almighty hangover following a Platinum Jubilee weekend in which the country celebrated the apolitical and widely popular Queen Elizabeth II.

In truth, though, Johnson was rarely allowed to forget his own dismal public standing. 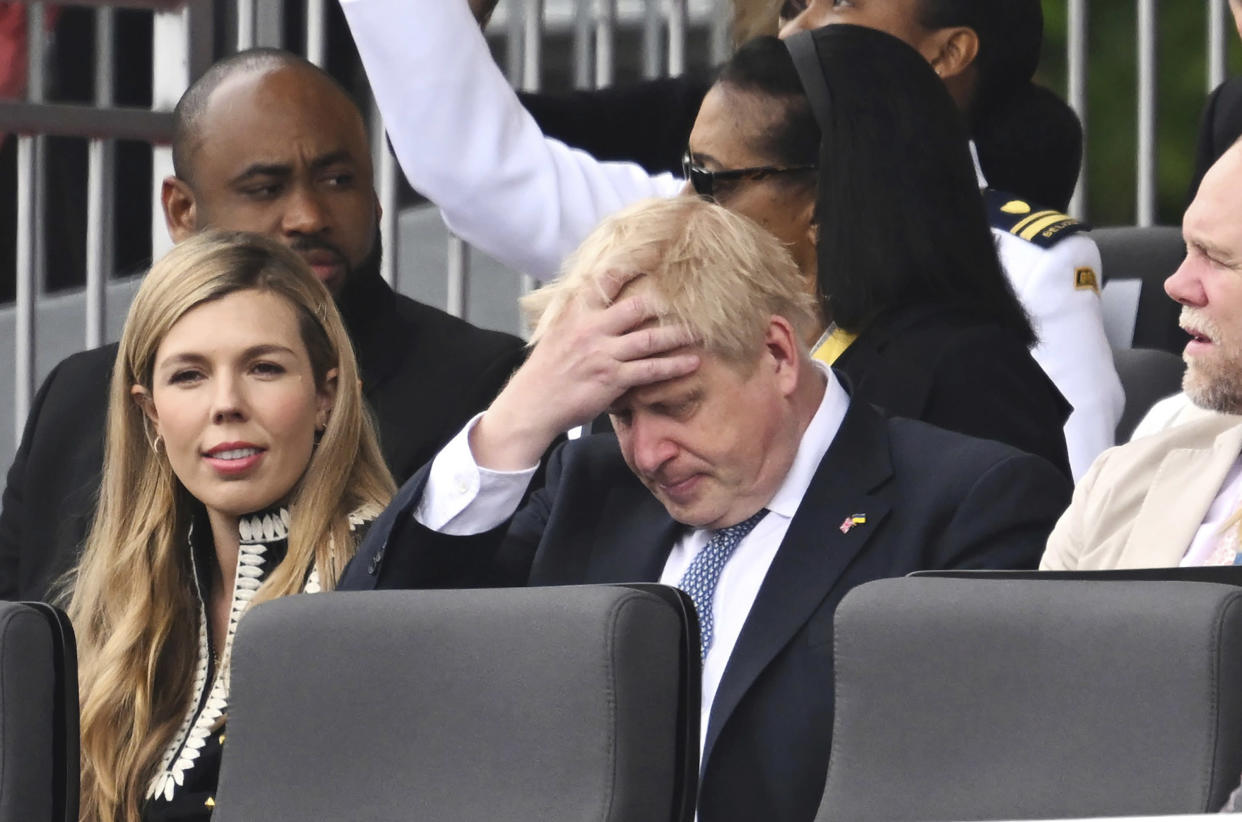 On Friday he and his wife, Carrie, were booed by crowds outside St. Paul’s Cathedral — notable for a leader of a right-wing party who might expect to count royalists among his core support. During Saturday’s concert at Buckingham Palace, comedian Lee Mack also cracked jokes about his unpopularity before a nationwide audience.

Johnson’s disapproval rating has soared to 68 percent, according to the pollster YouGov, having been as low as 26 percent in early 2020.

Disquiet has bubbled for weeks, but early Monday party officials announced that there would be a so-called vote of confidence in the prime minister held later in the day. Under party rules, this is triggered when 15 percent of its members of Parliament — currently 54 MPs — write formal letters saying they want their leader gone.

In a statement, Johnson’s office said the confidence vote was “a chance to end months of speculation and allow the government to draw a line and move on.” The prime minister will make his case to lawmakers beforehand, telling them that “when they’re united and focused on the issues that matter to voters, there is no more formidable political force,” the statement said.

Like much of British politics, the vote of confidence is an arcane and secretive process. And until now the total number of letters has only been known by one man, Sir Graham Brady, chairman of a group called the 1922 Committee, which represents backbench Conservative lawmakers.

On Monday Brady confirmed the threshold for a vote had been reached. Now there will be a secret ballot in Parliament between 6 p.m. and 8 p.m. local time (1 p.m. and 3 p.m. ET). Johnson needs more than 50 percent of Conservative MPs to support him, currently 180 votes.

“We are holding a vote of confidence and it will take place today — and you will have a result this evening,” Brady told reporters outside Parliament on a wet, grey morning in the British capital.

If Johnson loses, there would then be a leadership contest among party rivals to replace him, although he would remain leader until the winner was chosen.

If Johnson wins the secret ballot, he will be safe from further challenge for 12 months — officially at least. Brady noted Monday that these rules can be changed, while in reality the ruthless Conservative Party has a history of deposing leaders despite them winning votes of no confidence.

In 2019, Johnson’s predecessor Theresa May won such a vote, but the sizeable minority that came out against her made it clear that she could no longer carry on. Under slightly different rules in 1990, then-Prime Minister Margaret Thatcher defeated a challenge from her own finance minister but withdrew after consulting her Cabinet, who made it clear to her that she no longer had the full party’s support.

And it is clear that there are growing numbers within the party who think Johnson must go.

One of them, Jesse Norman, tweeted his letter Monday saying that Johnson had “presided over a culture of casual law-breaking at 10 Downing Street.” The prime minister had previously said that he had been “vindicated” over the parties — a claim that Norman described in his letter as “grotesque.”

The level of nationwide anger at the parties is hard to overstate. 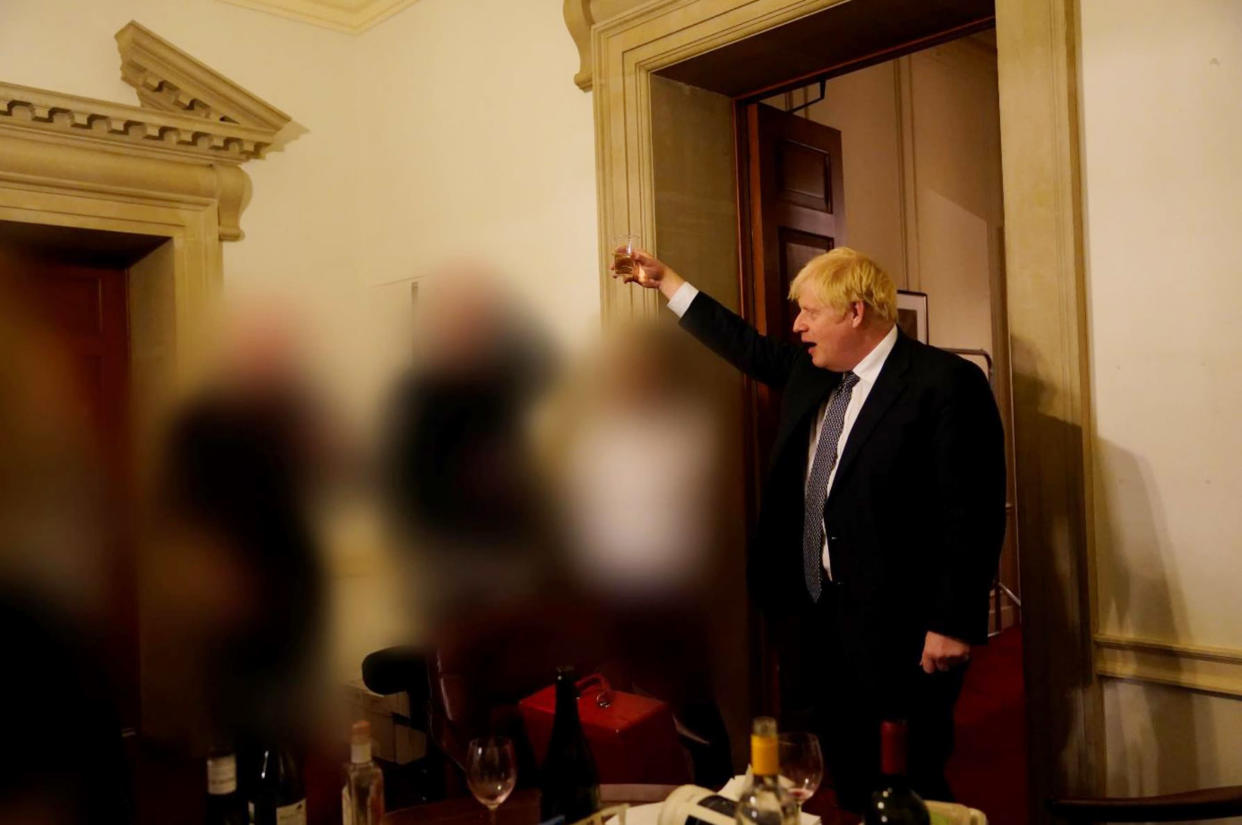 Under increasing pressure, the government commissioned an investigation which found a widespread culture of boozy parties — 16 events in total — including punch-ups and vomit on the walls. At one event staff left the building after 4 a.m., just hours before the queen was forced to sit alone at the funeral of her husband, Prince Philip, because of Covid restrictions.

A Metropolitan Police investigation issued 126 fines to 83 people, including Johnson and his wife. It made him the first sitting British prime minister found to have broken the law.

Johnson had already faced sleaze allegations, while his government has faced criticism over plans to override its own Brexit deal in relation to Northern Ireland, attempts to centralize power away from Parliament, and its policy of sending asylum seekers to Rwanda.