BORIS Johnson and Jeremy Hunt should quit the contest, team up and work together as PM after their chummy and banter-filled debate this evening, Sun readers say.

In the pair's final efforts to win over Tory voters tonight, the would-be party leaders bizarrely ended up agreeing with each other more than they clashed. 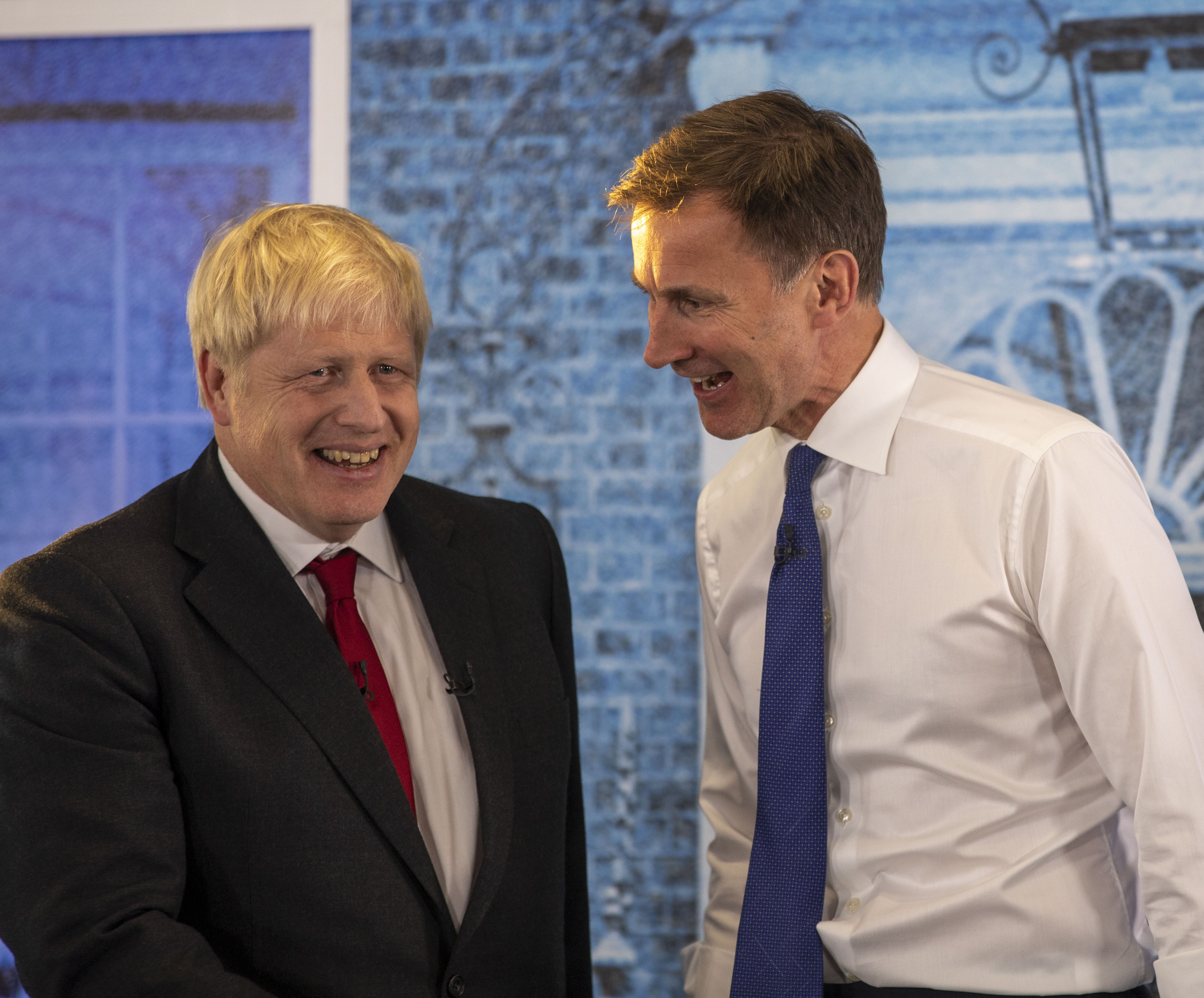 In stark contrast to previous bouts where candidates fiercely locked horns and talked over each other – they joked their way through the debate and left the audience laughing throughout.

Perhaps due to the fact they may need the other to offer them a job in a week's time, they came across more as comrades rather than opposing forces slogging it out for one last battle.

Host Tom Newton-Dunn, The Sun's Political Editor, chastised the occasional enthusiastic outburst, but mostly the duo stuck to the rules and politely let each other talk.

But with many readers unable to pick between the two, audience members told the Sun Online they should work as one to be the ideal Prime Minister – utilising Hunt's plans and Johnson's charisma.

Tory voter Sam Baker left Johnson grinning and the crowd gasping with his question on what they would do to change the view of MPs being "no more than self-serving posh boys".

But he later told the Sun Online despite not always feeling like they are on his "wavelength": "I actually think if they work together as a team – if you could merge the two of them together I think they might have a chance.

"You need Jeremy's attitude and his approach, but you need Boris in the room to get everyone together – he makes the whole room laugh here.

"Share it, they seem to be getting on so well, why not just share it and off they go!"

MOMENTS THE PAIR BANTERED DURING THE DEBATE

Responding to the surprising show of unity, the biggest applause of the night came as the pair agreed they would go to the pub for a pint once the battle is over.

But amid the unexpected friendly banter, Tory party members were left unsure who would be the best man for the job.

Luke Black, one of about 20 young Tory party members who wanted selfies with the PM hopefuls, confessed: "I genuinely don't know, I'm still a bit undecided if I'm honest with you.

"I came in here really pitching for Boris, but I think Hunt came across really well and I'm going to really consider voting for him.

"The reason why I'm a bit anxious because I don't want any doubt whatsoever, we must really, really leave the European Union.

"Fundamentally it's about the social contract between the people and politicians.

"Whether you agree with Brexit or not, there was a vote and if we do not implement that we are going to suffer that for a very very long time."

But despite the relaxed nature of the Sun/Talk Radio debate on the top floor of The Sun's HQ, the pair did cover the big issues of the day with the bit between their teeth.

They discussed immigration policy, US trade deals, improving the life of the ordinary working person, their plans for housing and the ticking Brexit timeline.

Not the scrappy fight that was expected, this debate saw plenty of cheers and genuine laughter as Johnson and Hunt became – somewhat bizarrely – united over several points.

And party members seemed enthused by this, agreeing both men would finally do the job of delivering Brexit and getting Britain out of the EU as PM.

Deanna Hallett, who stumped both candidates by asking if they would rather a second referendum or a general election if their deals did not get through, said she is "proud to be a party member where one of them would be leader".

And when asked if she thought Hunt and Johnson really care about ordinary working people, she said: "I am from a council estate in South Wales, I grew up on free school meals, I grew up on benefits and I wouldn't be a Conservative voter if I didn't believe they were going to defend ordinary people in the way that they said they would."

Johnson had appeared to be the favourite for many attendees, but plenty seemed to have their head turned following a debate that touched on Love Island and saw Hunt cheekily offer Johnson a job in his cabinet – as he gave as good as he got in a charm offensive from both parties.

WHAT JOHNSON AND HUNT SAID

Rachael Cole told the Sun Online: "I was going into it thinking Boris was the superior but I thought Hunt spoke really well.

"I still haven't voted yet so I was thinking I'm going to come out and make up my mind and I thought Hunt spoke really well and now I don't know."

And Stefan Hopewell added: "Jeremy edged it tonight. I would say that I came in as a Boris fan but having listened to both I think they both gave good performances, but Jeremy just filled me with a bit more confidence.

"Both would do a good job, and I'd be happy to see either of them in the role."

Insiders believe Johnson is “home and dry” with a week to go until the deadline for Tory voters to have their say in the election.

But addressing the audience of Sun readers in the heart of London, Hunt insisted he was not far apart from his rival when it came to delivering Brexit by the new deadline of October 31.

He added: “Both of us want to leave by October 31. Both of us hope Parliament won’t block a No Deal Brexit.”

And both men committed to handing at least one of the top four jobs in their Cabinet to women days after Work and Pensions Secretary Amber Rudd said she had now “accepted” No Deal had to remain on the table.

Asked to guarantee he would award the job of either Chancellor, Home Secretary, Foreign Secretary or Defence Secretary to a woman, Johnson dithered before saying: “I think I’m going to say yes, depending on what you mean by top four.” 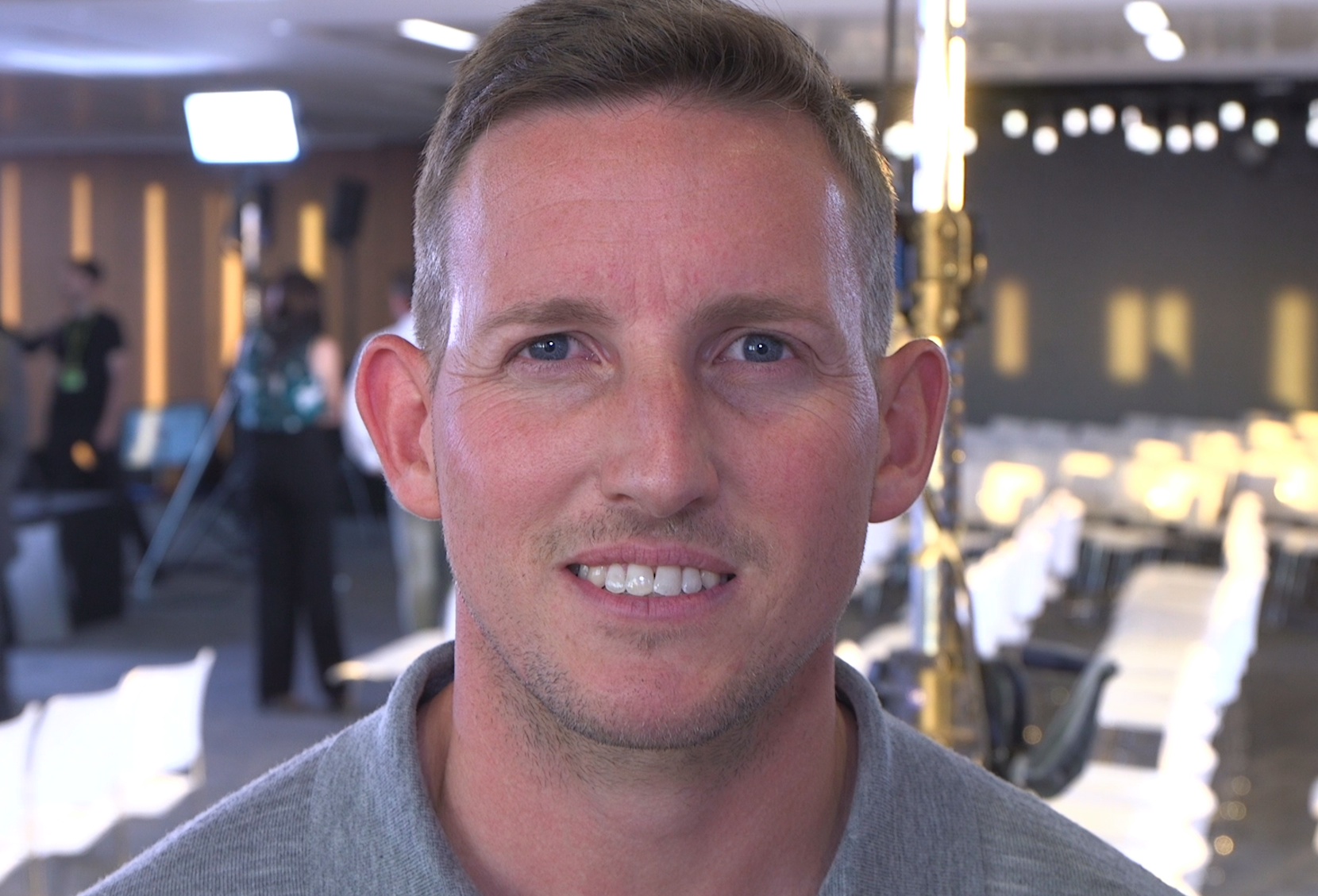 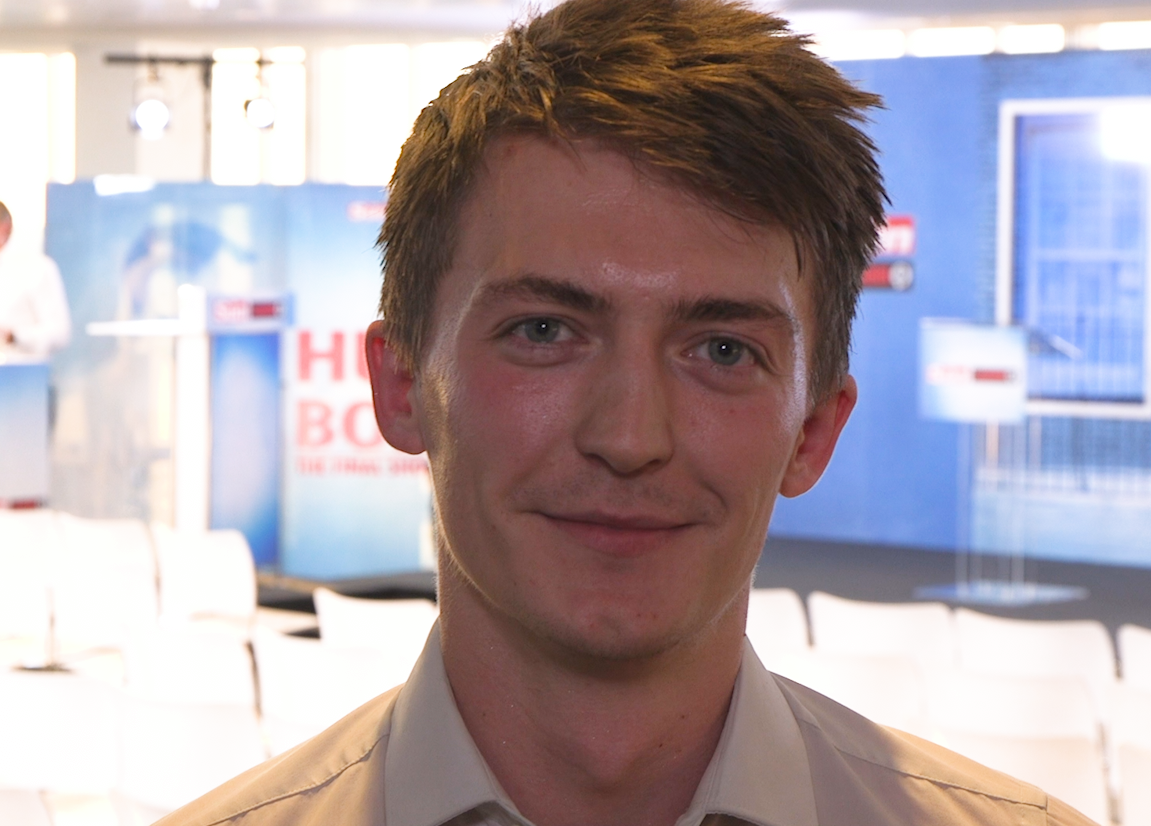 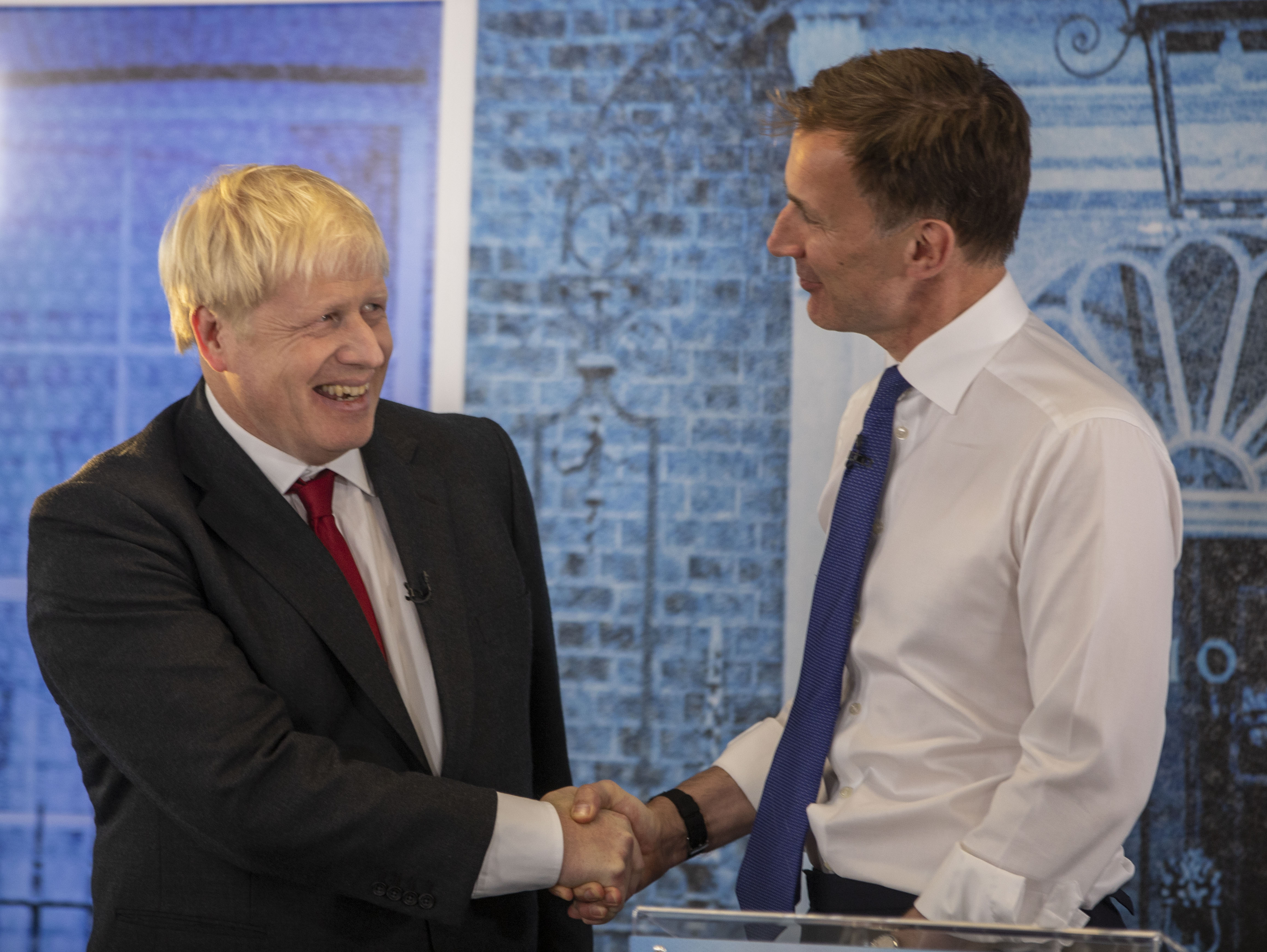 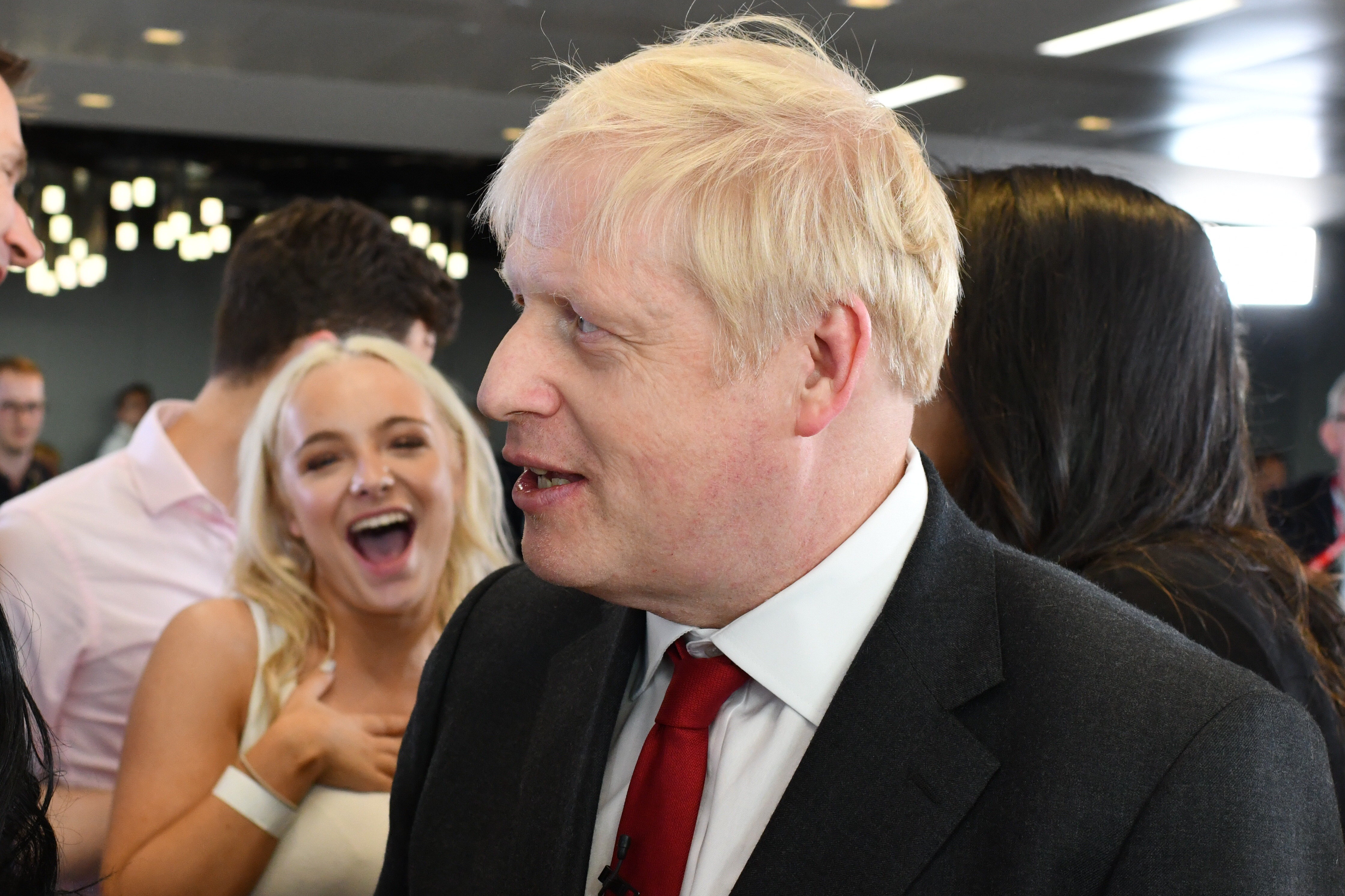 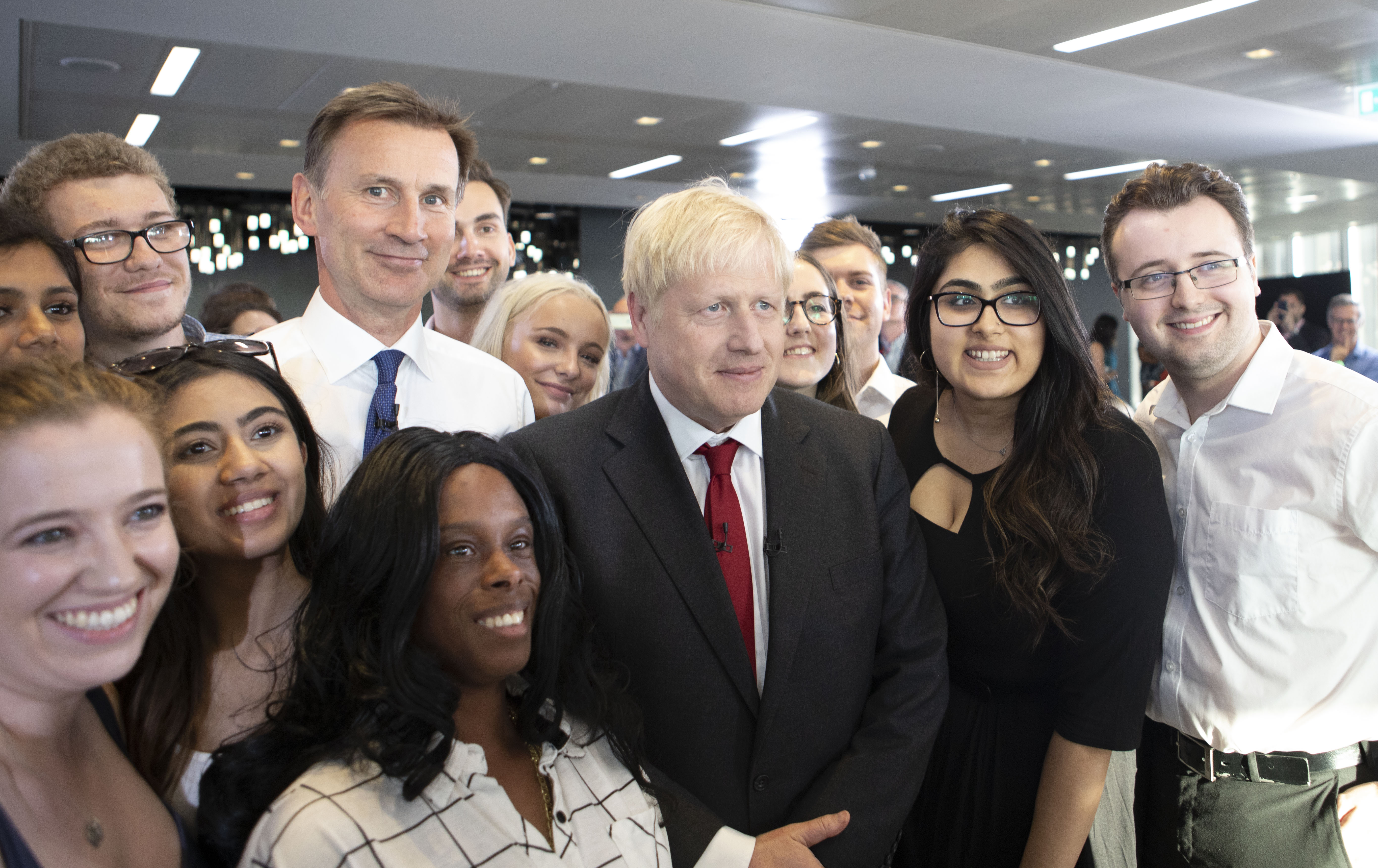