Blunders have let Russian oligarchs sail their yachts to freedom: £1.8billion of assets including a private jet are spirited away before European officials could hit them with sanctions as MPs brand failure to hurt Kremlin a ‘total dereliction of duty’

At least four yachts and a private jet owned by sanctioned Russians or their families have escaped the grasp of European officials in recent weeks, a Daily Mail investigation can reveal.

Between them, the oligarchs have managed to spirit away £1.8billion in assets.

A fifth yacht linked to a firm subject to sanctions was also on the move.

MPs and campaigners described blundering nations’ failures to freeze assets owned by Kremlin cronies as a ‘total dereliction of duty’.

Among the most notable examples is Roman Abramovich’s £445million superyacht, which was ‘rushed’ out of a shipyard in Barcelona weeks before repairs were finished.

Staff working on Solaris – which boasts its own helipad and missile detection system –said they were told to tear down scaffolding at short notice ‘so the boat could leave’ on Tuesday, less than 48 hours before the billionaire owner of Chelsea was sanctioned by the UK. Last week the largest boat in Abramovich’s fleet – the 533ft Eclipse, worth an estimated £672million – sailed away from the Caribbean island of St Martin, which is part of the European Union, putting it beyond sanctions.

A £180million private plane owned by the family of Alisher Usmanov was allowed to leave Munich airport 24 hours after Germany closed the skies to Russian aircraft. The former Arsenal shareholder was sanctioned by the EU on the same day, February 28. 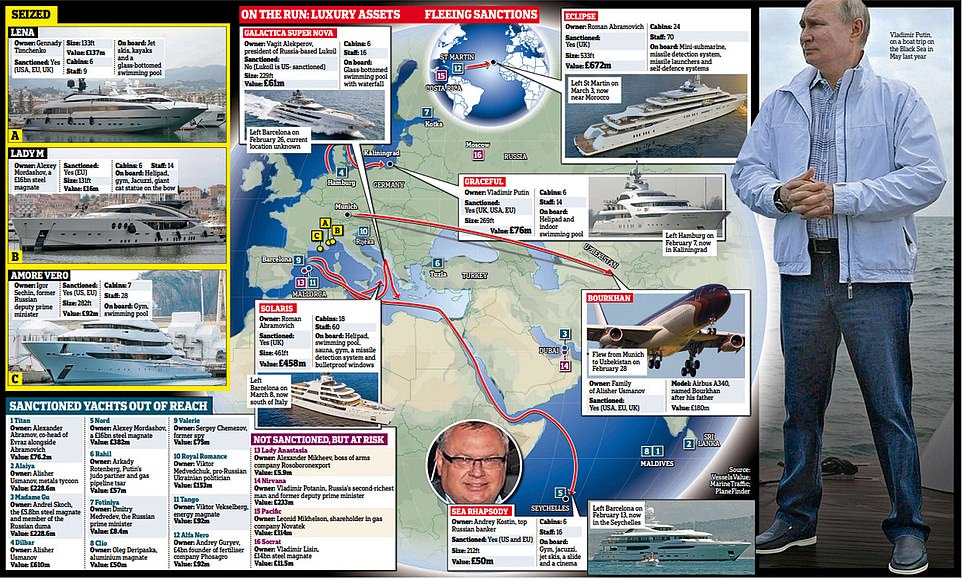 At least four yachts and a private jet owned by sanctioned Russians or their families have escaped the grasp of European officials in recent weeks, a Daily Mail investigation can reveal

The plane, a custom-painted Airbus A340 named after the metal tycoon’s father, is now in Uzbekistan beyond the reach of officials, according to flight data.

Usmanov said he had passed ownership of the aircraft to his family and claimed there was ‘no legal basis’ for their seizure.

The EU also watched as the £437million yacht owned by Andrey Kostin, the ‘Jedi Master’ of Russian finance, sailed from Barcelona to the Seychelles days before Ukraine was invaded on February 24. Graceful, the 269ft superyacht believed to be owned by Russian president Vladimir Putin, escaped Hamburg for Russia’s most westerly port Kaliningrad last month as troops built up on Ukraine’s border. 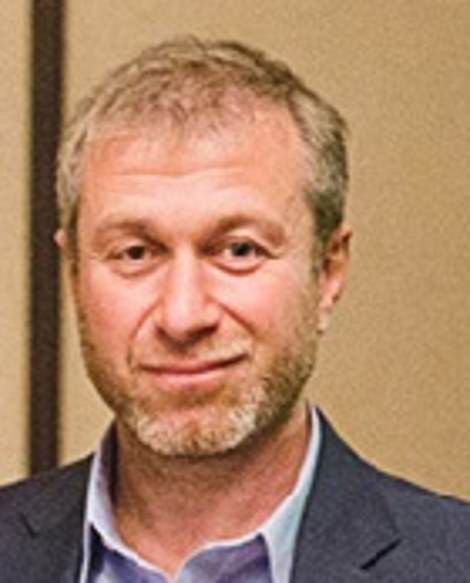 Experts said there was no hope of seizing the assets once they left Europe, meaning their owners are free to enjoy them even as the war enters its third week. Ross Denton, of law firm Ashurst, said: ‘There’s no extradition law for boats.’

Vagit Alekperov, president of US-sanctioned oil company Lukoil, moved his boat from Barcelona two weeks ago. He has not been personally sanctioned.

In a further case, a superyacht linked to Russia’s sanctioned former president Dmitri Medvedev has not been seized by a boatyard in Finland because they reportedly ‘have no information that the vessel belongs to him’. Last night, Abramovich’s two biggest yachts – worth a combined £1billion – appeared to be heading towards safe waters in the eastern Mediterranean. He was finally hit with UK sanctions on Thursday.

But days earlier, as the net closed in, staff working on the 461ft Solaris were told to prepare the asset to leave Barcelona ‘suddenly’. Its eight decks still needed to be painted and its teak wood treated – refurbishment that would have taken a further two weeks, workers told the Mail.

One staff member said: ‘Some scaffold sheeting had to be put up and they [the manager] suddenly told us the work couldn’t be done and the scaffolding had to be taken down so the boat could leave. It would have stayed longer.’

Solaris was south of Italy yesterday, and appeared to be sailing to the safe waters of Montenegro, according to data from Marine Traffic. Eclipse is expected to pass the Strait of Gibraltar tomorrow.

Chris Bryant MP, a Labour member of the Commons foreign affairs committee, said: ‘We gave [Abramovich] two weeks’ warning – plenty of time to scurry away like a rat.

‘Why is the Government taking so long about this? Why? It’s very frustrating, there was nothing that was known on Thursday that wasn’t known by the Government two weeks ago or even three years ago.’

Susan Hawley, executive director of Spotlight on Corruption, said the delay ‘has given those close to Putin and in the oligarchy plenty of notice to shift their assets beyond the reach of sanctions enforcement’.

Labour MP Margaret Hodge, chairman of the all-party parliamentary group on anti-corruption, said: ‘It is a total dereliction of duty that law enforcement agencies are allowing oligarchs to sail their yachts and fly their jets where they cannot be impounded.’

Tory MP Andrew Mitchell said: ‘Impounding the toys of Putin’s money men strikes at the heart of his support. It’s a highly effective weapon and together with all civilised countries we must do everything we can to exploit this Putin weakness.

‘Governments around the world should have moved further and faster and then it would not have come to this.’ 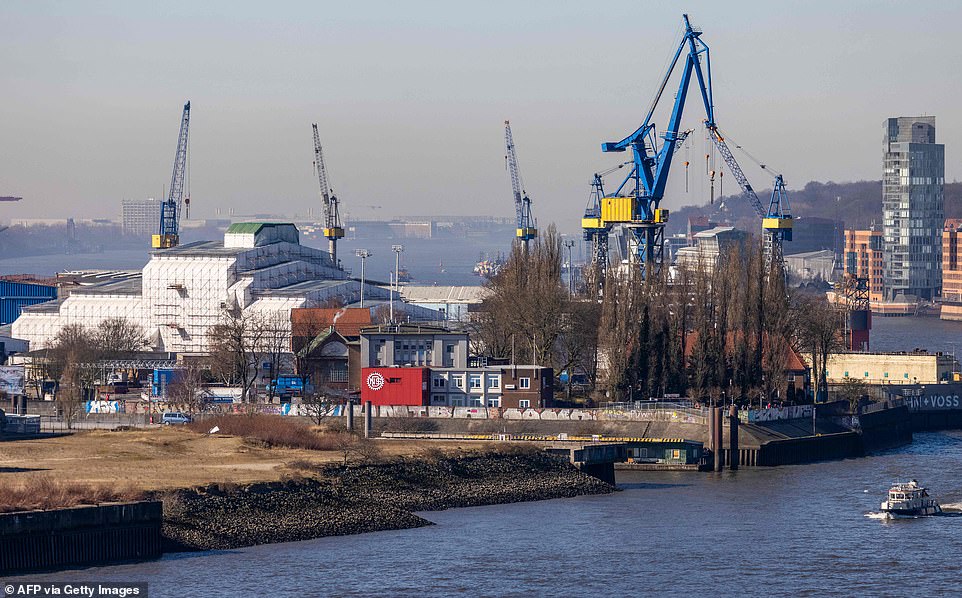 A giant scaffolding covered in tarpaulin covers the super-yacht ‘Dilbar’ lying in dry dock at the German shipbuilding company Blohm + Voss compound on the river Elbe at the harbour in Hamburg, northern Germany, on March 7, 2022

Two superyachts owned by Russian oligarchs are in the same MB92 Barcelona shipyard where Abramovich’s Solaris had been before it suddenly set sail.

One is £106million Valerie, owned by former KGB officer Sergey Chemezov who is subject to US sanctions. This week staff covered its name in black sheeting.

Tango, owned by US-sanctioned Viktor Vekselberg, the founder of a Russian energy conglomerate, was last seen in Mallorca.

The boats can only be seized if the EU imposes sanctions before they cast off.

Clio, owned by Oleg Deripaska, is in the Maldives. Rahil, which is owned by Putin’s judo partner Arkady Rotenberg, was last seen in Turkey, while Nord, owned by steel magnate Alexey Mordashov is in the Seychelles.

The hunt for private jets has stuttered. At least two planes linked to super-wealthy Russians have travelled through Basel, Switzerland, in recent days, in apparent contravention of the EU flight ban. 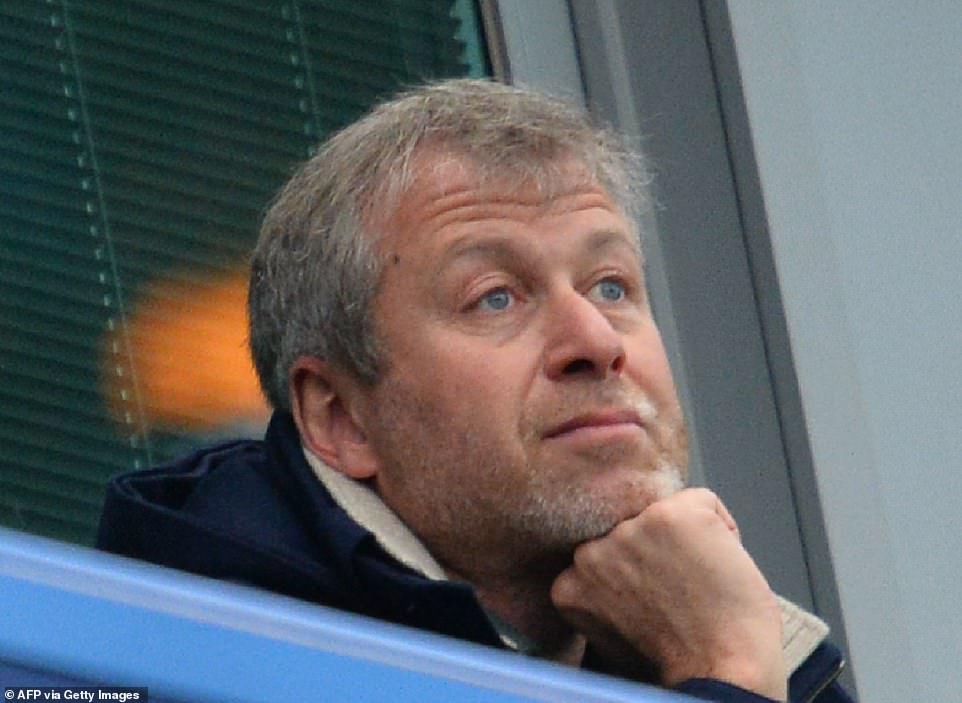 The UK grounded a private jet in Farnborough believed to belong to oil baron Eugene Shvidler on Tuesday but has not yet been able to prove the Luxembourg-registered plane is actually Russian. Although Mr Shvidler, a close friend of Abramovich, has not been sanctioned himself, new laws passed by the Government have made it illegal for any plane owned or chartered by Russians to fly in UK airspace

A Boeing 767 previously used by Abramovich landed in Basel on Tuesday, but has not been seized. The oligarch’s main jet, a £264million Boeing 787 Dreamliner, is in Dubai.

The UK grounded a private jet in Farnborough believed to belong to oil baron Eugene Shvidler on Tuesday but has not yet been able to prove the Luxembourg-registered plane is actually Russian. Although Mr Shvidler, a close friend of Abramovich, has not been sanctioned himself, new laws passed by the Government have made it illegal for any plane owned or chartered by Russians to fly in UK airspace.

A representative for Usmanov said he had transferred ownership of his plane to his family, adding that he is ‘convinced that there is no legal basis for any blocking or any other restrictions’ on his assets.

He said: ‘The assets were long ago transferred to an irrevocable trust whose beneficiaries are Mr Usmanov’s relatives. From that point on, [he] did not own them… but could only use them on a rental basis.’

Three representatives for Abramovich did not respond to requests for comment.

Kostin and Alekperov have also been contacted for comment.