Britain endured an economic ‘Black Thursday’ yesterday as the Bank of England warned that households face the worst fall in living standards since records began more than 30 years ago.

The Bank predicted that spending power would tumble by 2 per cent this year – with wage rises failing to keep up with the soaring cost of living.

This would be only the third time that so-called real income has fallen for a calendar year since 1990, the year Margaret Thatcher was forced out of office. Yesterday the central bank put up interest rates from 0.25 per cent to 0.5 per cent. 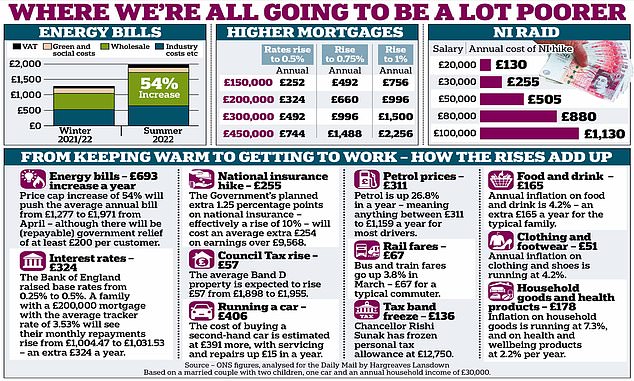 Emily and Daniel Bye are hundreds of pounds worse off compared with last year after soaring energy, food and fuel prices.

The cost of their weekly shop has increased by £30 for the same groceries and their utility bill has grown by around £75 a month.

The Byes, who live with their son Aiden, 14, in Wiltshire, currently spend around £150 on electricity – a 50 per cent increase compared with December.

They have also noticed the cost of petrol jump in recent months and their water bill rise from £33 to £48 a month.

It means the couple, who were saving £250 a month between them, can no longer put money aside and have stopped going out for meals.

They said they want to expand their family but are now concerned they may not be able to afford another child.

Mrs Bye, 37, a client solutions manager, said: ‘We work really hard and are not frivolous but we’ve still had to make cutbacks. I am not sure how much we can take.’

Policymakers also warned that inflation would hit 7.25 per cent in April – up from its November forecast of 7 per cent, and the highest since August 1991, when John Major was in power.

The grim warning came on the day that families were told average energy bills would soar by £693 from April. The jacked-up price cap means dual fuel bills will hit almost £2,000. The cap is expected to rise again in the autumn.

Families are already facing the prospect of a 1.25 per cent hike in National Insurance in April to help pay for the NHS and social care.

Yesterday Boris Johnson recommitted to the tax increase, saying he and Chancellor Rishi Sunak had no other choice.

He said: ‘Our Covid recovery plan has got to involve dealing with the colossal backlog that we’ve got in our NHS. There are huge numbers of people – six million, one in ten of the UK population – currently waiting on an NHS waiting list.

‘That’s going to go up, I’m afraid. We’ve got to put in the money to fix it and nine million more scans, 50,000 more nurses, building the hospital capacity that we need.’

On top of this, petrol prices, rail fares and mobile bills are all going up. Yesterday, The Bank of England said that while wages were rising, they were falling far short of the rapid rise in the cost of living.

The last time real income fell was in 2011, when spending power slumped by 1.3 per cent. And this year’s slide would be five times the hit which families saw at the height of the financial crisis in 2008, when real income slipped by 0.4 per cent.

With another 0.5 per cent fall in spending power expected next year, families will have to wait until 2024 before they see their budgets starting to stretch further again.

In an attempt to get a grip on the spiralling cost of living, the Bank voted to hike interest rates.

Officials on the nine-strong Monetary Policy Committee (MPC) agreed to lift the Bank’s base rate from 0.25 per cent to 0.5 per cent, in the hope that this would help keep a lid on soaring prices. 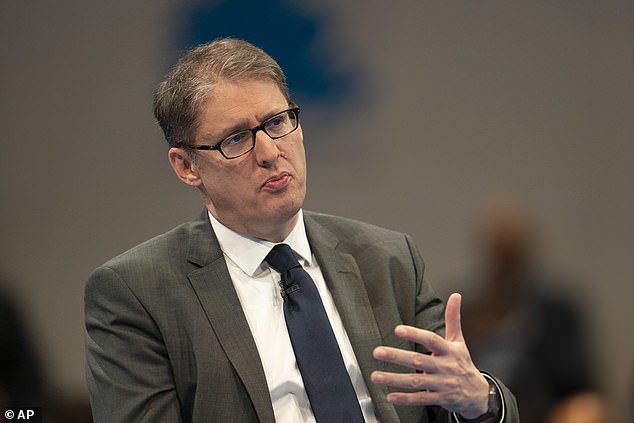 Pictured: Speaking at an event today, Tony Danker, director-general of the Confederation of British Industry, said the UK was ‘caught in a trap’ of high taxes and low growth

‘Things will get worse before they get better’ 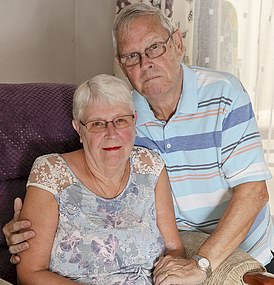 Pictured: Joyce and Stan Pinnington, who have an annuities that pay a pittance

Mr Pennington, 74, a retired advertising agency worker, and Mrs Pennington, a former NHS medical secretary, have a combined income of £2,400 a month.

But as their £84-a-month fixed deal has come to an end, they will now roll on to a standard variable tariff.

And they are likely to see their annual bill hiked by £1,200 a year as a result, according to comparison site The Energy Shop.

Mrs Pennington, 73, who suffers from a brain condition, needs to keep warm to stay well.

But the couple are already turning down the heating and wearing extra layers in their two-bed bungalow in Bishop’s Stortford, Hertfordshire.

‘This year is going to be tight and it feels like things are going to get worse before they get better.’

It is the first time they have hiked rates at back-to-back meetings since 2004, following the rise in the base rate from its pandemic record low of 0.1 per cent.

In a sign of how worried the Bank is becoming about inflation, four of the MPC’s members voted for interest rates to rise even higher, to 0.75 per cent.

While higher rates will benefit savers, who have been labouring under rock-bottom interest rates since the financial crisis more than a decade ago, they will weigh heavily on many families as the cost of mortgages and other loans soar.

Hard-up households already struggling with rises in the cost of living could find their budgets even more stretched.

‘This is a hard message and I know that we are facing a squeeze on real incomes,’ said the Bank Governor Andrew Bailey.

‘I know it’s a hard message, I’m not going to hide from that. But if we don’t take this action then it will be worse.’

While joblessness is expected to drop back below pre-pandemic levels in the first three months of this year, to 3.8 per cent, the Bank expects it to rise back to 5 per cent by 2024 as households rein in their spending and businesses are forced to make cuts.

The economy, meanwhile, is expected to grow by just 3.75 per cent this year, down from Threadneedle Street’s previous estimates of 5 per cent. And by 2024, it will be growing by just 1 per cent a year.

Tony Danker, director-general of the Confederation of British Industry, said the UK was ‘caught in a trap’ of high taxes and low growth.

Speaking at a CBI event, he said: ‘There are rising spending pressures, too much tax and too little growth.

‘We’re caught in a trap. The Government are in a tough spot in all of this of course. They say we can’t afford to spend more on growth.

‘But I say we can’t afford not to.’ He called for ministers to cut taxes for businesses which are investing in their future, plough more money into training workers, and spend more on ‘green’ technologies.