One of the country’s largest unions has been quietly targeting voters in must-win federal electorates with a scare campaign falsely claiming the Coalition has a secret plan that would stop pensioners buying Christmas presents for their grandchildren.

They link to a site asserting with words and imagery that Prime Minister Scott Morrison intends to force aged pensioners nationwide onto cashless debit cards, which restrict welfare money to stop it being used on alcohol and gambling.

Memes from a page linked to the United Workers Union that incorrectly suggests the government is planning to put age pensions on the cashless debit card.

The government is trialling a cashless debit card in select locations around the country. It previously said it wants to broaden the scheme, which critics have denounced as patronising and ineffective for the parents and unemployed workers it is designed for. The government has repeatedly and specifically denied it will ever force aged pensioners onto the cards.

The union’s ads, which have been targeted at voters in seats in Tasmania, Queensland and Western Australia that will be key to deciding which party wins the next election, point viewers to a website called nocashlesspension.com that gives a different impression.

The site features memes that appear to be deliberately low in quality, including images of older Australians and references to elders. It claims the government will ban pensioners from going to RSLs and rob them of dignity in retirement.

The ads have surfaced amid mounting concerns about unregulated online advertising ahead of the next federal election, which is due before the end of May.

Online scare campaigns that tap into voters’ perceptions of each party, but exaggerate them with falsehoods, have featured prominently in the last two elections. Australian law does not require truth in federal political advertising. 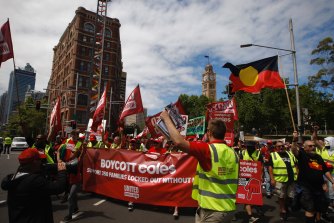 The United Workers Union is a powerful force in Labor politics because of its large membership and financial muscle.Credit:Dean Sewell

The link to the United Workers Union – a major Labor donor that represents generally low-paid workers in sectors such as warehousing, cleaning, aged care, and casinos – is only apparent through Google’s political ad database.

The campaign website it links to bears no union branding and is only authorised by a “G Moran” of a residential address in Brisbane, whom the Herald and The Age were unable to contact.

“Pensioners won’t even be able to buy Christmas gifts for their grandchildren under the new Liberal-National plan,” the site reads.

While the cashless debit card restricts the use of cash, it has no prohibition on buying children’s toys or other likely presents – except gift cards that could be used to buy alcohol. 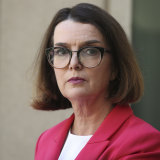 Social Services Minister Anne Ruston said the ads were a shameful attempt to scare senior Australians into voting for Labor. “This is another example of the union movement doing the Labor Party’s dirty work,” Senator Ruston said.

She said it “beggars belief” that the union was circulating claim the government did not want grandparents to be able to buy their grandchildren Christmas presents.

“It is up there [with the] most ridiculous, disgusting and dishonest claims I have ever heard in my time in politics,” she said.

On the government’s policy, Senator Rushton was emphatic. “The Morrison government couldn’t be clearer – we have never and will never have a plan to force age pensioners on to the Cashless Debit Card. We have made this guarantee in legislation.”

Labor has no apparent involvement in the ads or website, but several of its MPs all the way up to deputy leader Richard Marles have previously claimed that the government plans to quarantine pensioners’ income on cashless debit cards.

A spokeswoman for the union said the ads are consistent with the requirements of electoral legislation and it would fight back against attacks that undermine the secure retirement of working people.

“We make no apologies for taking a stand against legislation introduced by the Morrison government that has the potential to unfairly punish vulnerable members of our community,” the spokeswoman said.

The union did not answer questions about whether it was responsible for the landing site as well as the ads pointing to it or why its involvement is largely hidden.

Experts have previously warned that false claims are politically powerful because attempts to rebut them can draw further attention and reinforce their general ethos in voters’ minds.

Figures from the Department of Social Services show there are 24 age pensioners on the cashless debit card, primarily people who have opted in around the Cape York area, with none forced onto it by the federal government.

In contrast to other political expenditure, which includes tens of thousands of dollars in donations to the ALP, the United Workers Union has spent only a small amount on its cashless debit card ads.

That is well below the reach of the United Australia Party, backed by Clive Palmer, which has spent more than $6 million in ads on Google’s platforms alone since November 2020.