WASHINGTON – Heading into the winter months when COVID-19 cases spike, the Biden administration knew it had a problem.

Fewer than half of nursing home residents across the country, who are at higher risk of seriousness illness and death from COVID-19, were up to date on their vaccines.

While offering assistance to get more seniors in senior facilities boosted, the federal government reminded nursing homes they’re required to offer all vaccines, including boosters, to residents and staff and educate them on their benefits.

Failure to do so could lead nursing homes to face greater oversight and enforcement actions, the Biden administration said.

Boosted rates went up from shortly before Thanksgiving to the start of the year – but only by 5.5 percentage points – leaving roughly half the population of nursing home residents without ongoing protection from the deadly virus as winter set in. Data released in the next two weeks will provide a clearer picture of whether a national spike in cases in nursing homes in mid-December led to serious illness, which is what vaccinations help prevent.

Meanwhile, state regulators reported only 378 instances of homes not meeting this requirement during 2022, according to a USA TODAY tabulation of violation reports. Enforcement occurs at the state level, with inspections happening about once a year on a rolling basis for the nation’s more than 15,000 nursing homes.

For most of the year, inspectors issued an average of 36 citations a month for not providing required vaccine education. Just 23 were issued in November and only seven in December, when the White House was pushing the initiative.

Only 24 of the citations in 2022 received a severity code high enough to trigger a fine, including one in November and one in December, according to USA TODAY’s analysis.

“You can draw a reasonable conclusion from the fact the (vaccination) numbers are so low, that whatever you’re doing isn’t working,” said Sam Brooks, director of public policy for the National Consumer Voice for Quality Long-Term Care. 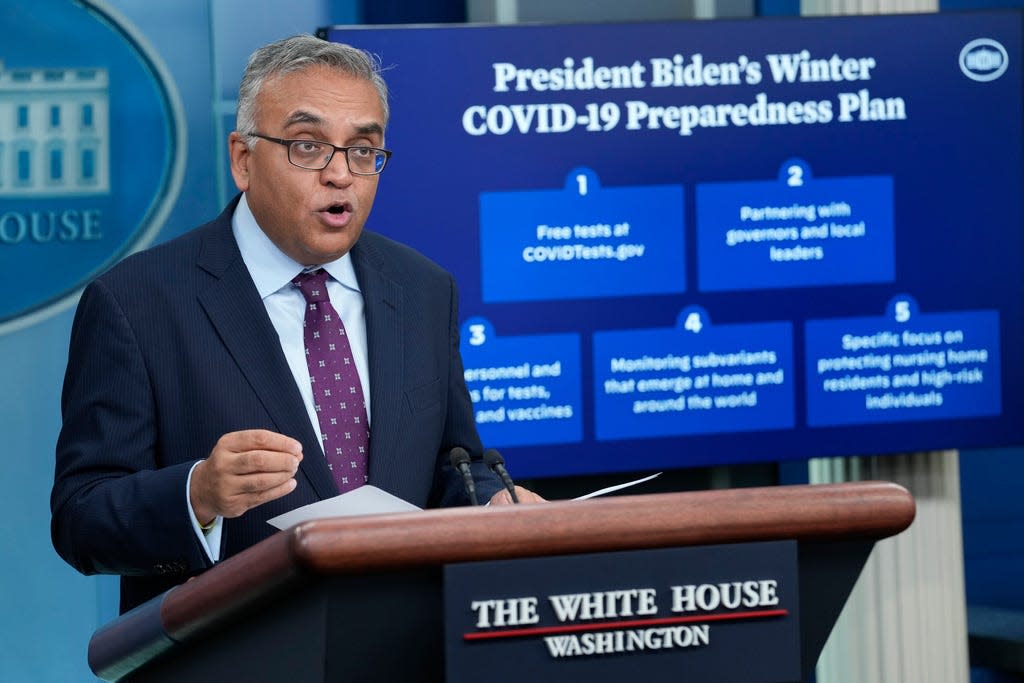 There’s considerable variation in vaccination rates across the country.

In the five top states – South Dakota, Alaska, Hawaii, Delaware and North Dakota – more than 7 in 10 nursing home residents are up to date on vaccines.

In the five worst states – Arizona, Florida, Nevada, Texas and Mississippi – fewer than 37% are.

Nursing home associations say progress is being made and an all-hands-on-deck effort by the public and private sector continues to be needed to increase rates, particularly persuading seniors of their importance.

“The story is truly that nursing homes are trying, and in fact, they are making real progress at a time when the overall American public is less than enthusiastic about boosters,” said Lisa Sanders, a spokeswoman for LeadingAge, the largest association for nonprofit nursing homes.

Among the 1.2 million people now living in nursing homes, the Centers for Medicare and Medicaid Services reports that 8% have declined a COVID-19 vaccination when offered. That counts only people who have received no shots. The number of people who decline boosters is not tracked.

There are still about 1,000 nursing homes who have no vaccinated residents, Department of Health and Human Services Secretary Xavier Becerra reminded nursing home providers Wednesday.

In Arizona, where about 31% of nursing home residents had received the latest booster at the start of the year, the state health department is working to improve that rate, according to spokesman Steve Elliott.

When nursing homes said they were having trouble getting vaccination providers to visit a facility for just a handful of patients, the health department promoted state-funded clinics.

“We will accommodate even if just one person at a home or facility wishes to get the booster,” Elliott said in a detailed written response to USA TODAY.

Still, some nursing homes report even that is difficult to arrange because employees are stretched thin with staffing, an early surge in influenza and RSV, and the pandemic.

Other efforts to increase booster rates in Arizona include having surveyors distribute information on free mobile clinics when inspecting nursing homes and a new social media campaign promoting expanded online information about getting boosted.

“There obviously,” Elliot said, “is much more to be done.”

Chiquita Brooks-LaSure, administrator for the Centers for Medicare and Medicaid Services, told USA TODAY in a statement that nursing homes need to “make this their No. 1 priority.” 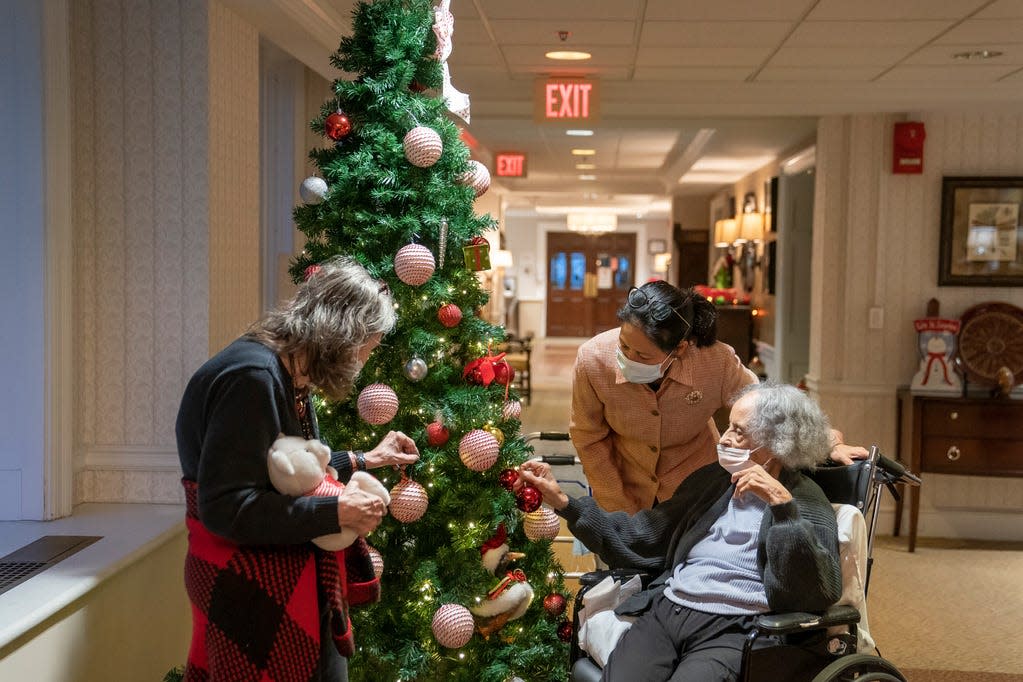 ‘Enforcement is the weakest link’

The federal government began requiring nursing homes to educate staff and residents about COVID-19 vaccines and to offer to help get them vaccinated in mid-2021.

Even before COVID-19, when nursing homes became an epicenter of the pandemic, infection prevention and control was a persistent problem in nursing homes, according to the U.S. Government Accountability Office, the independent oversight agency which recommended the vaccination requirement.

But Brooks, of the National Consumer Voice for Quality Long-Term Care, said, reviewers can be reluctant to cite a violation if they don’t see an immediate harm, such as a number of deaths from COVID-19.

And nursing homes are rarely fined when problems are found, which make it too easy to avoid requirements, he and other advocates argue.

“Enforcement is the weakest link in the regulatory system,” said Toby Edelman, senior policy attorney for the Center for Medicare Advocacy.

A previous USA TODAY investigation detailed the challenges inspectors face gathering enough evidence to back up citations that might trigger fines, payment denials or other penalties.

It is rare for nursing homes to be penalized with “payment denials” until they make corrections and even less common for them to lose their certification for federal payments.

Administration officials said they use progressive enforcement, and the first step of a correction plan for problems of lower severity is a critical tool, even if that doesn’t result in a fine. Regulation violations are also part of the public record that consumers can check when evaluating a nursing home.

In addition, the Biden administration has tried to get states to step up enforcement.

At the start of the year, Brooks-LaSure wrote the governors of the five states with the lowest nursing home vaccination rates asking for a meeting to discuss how the rates could be improved.

And, officials said, they’ve combined enforcement with assistance, including allowing nursing home staff to administer boosters directly as many had requested.

Through the groups of health quality experts on contract with the federal government, CMS also offered individualized help to more than 85% of nursing homes. That led to more than 150 vaccination clinics across the country, serving 4,134 nursing homes residents, according to the agency.

The administration is also encouraging hospitals to boost patients before they’re discharged to nursing homes.

The efforts helped. But not enough.

“The progress is not as quick as anyone wants to see,” Brooks-LaSure said in her statement to USA TODAY. 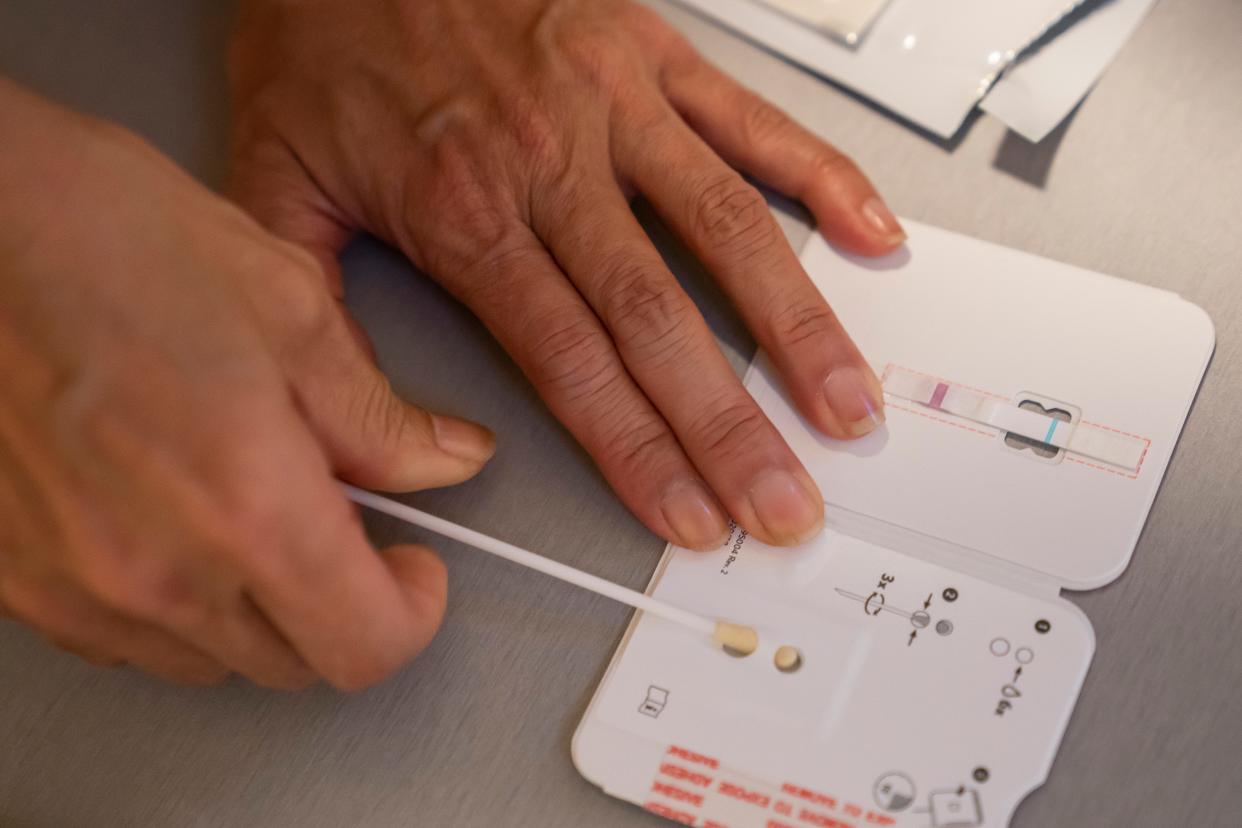 The nation’s largest associations representing nursing homes point out that only 39% of all Americans aged 65 and older have been boosted, showing that the problem is worse outside nursing homes.

LeadingAge and American Health Care Association, the nation’s largest trade group for nursing homes, said they face many challenges getting residents to accept boosters, including a lack of understanding about why they’re needed and “enormous” COVID fatigue.

“Residents and families need to hear about the importance of the booster from a number of trusted sources, not just nursing home staff,” said Dr. David Gifford, AHCA/NCAL’s chief medical officer. A common view that the booster shot isn’t necessary, despite the evidence to the contrary, is “the number one problem,” he said in a statement.

The nursing home staff that are required to educate residents about vaccinations aren’t setting an example with their own behavior. Fewer than one-quarter are up to date on their vaccines, a rate little changed from the start of the administration’s booster campaign.

Higher staff vaccination rates were associated with fewer COVID-19 cases and deaths among residents prior to the Omicron variant wave, according to a recently published study. Those researchers estimated that a 10-percentage-point increase in staff vaccination rates would have prevented about 123,000 resident cases, 18,000 residents deaths and about 21,000 staff cases nationwide.

Edelman, the senior policy attorney for the Center for Medicare Advocacy, said that’s one reason why her group wants the federal government to require nursing home staff be up to date on their vaccines.

“What we’re concerned about is that CMS is very focused on resident vaccinations and boosters and not staff boosters, which seems to be a really important problem,” she said.