A Barbados official has hinted at plans for a universal basic income, just two weeks after breaking its ties with the British monarchy.

The universal basic income (UBI) may come in the form of a ‘citizen’s dividend,’ Avinash Persaud, Special Envoy to the Prime Minister of Barbados on Investment and Financial Services said in a post last week on Facebook.

He wrote the ‘citizen’s dividend may be combined with the annual reverse tax credit to form some kind of universal basic income’ for Barbados’ almost 300,000 citizens. 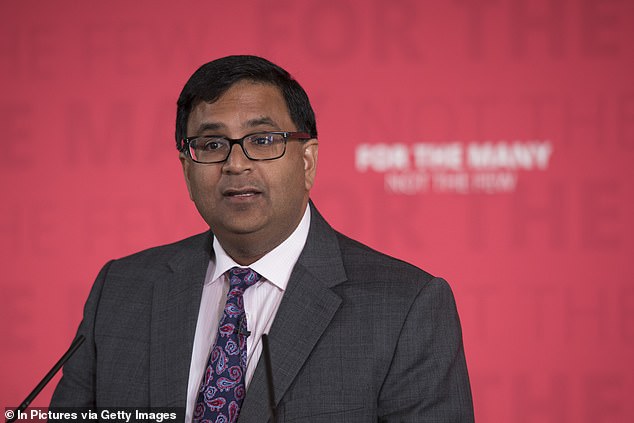 Barbados official (Avinash Persaud, Special Envoy to the Prime Minister of Barbados on Investment and Financial Services, pictured in London in 2017, file photo) has hinted at plans for a universal basic income, just two weeks after breaking its ties with the British monarchy

A UBI is defined as a government-run programme under which every adult citizen receives a set amount of money at set intervals, usually monthly.

A citizens dividend, meanwhile, is a form of UBI depends on the value of natural resources of a country, and on the principle that the natural world is common property for all people. It proposes citizens receive payments from revenue raised by the state by leasing or taxing land and other natural resources.

However, there have been few large-scale tests of UBI systems, with studies of trials that have been carried out – such as one in Finland – finding UBI to be unsustainable.

He noted that one of the key issues facing the provision of a UBI was the mechanism of financing such a programme.

Persaud spoke about the government’s Sovereign Wealth Fund, which he said would own all the government’s assets, and that the administration would ‘make them work for all Barbadians,’ according to Barbados Today.

He said assets not required for government work would not be sold, and instead used to generate income for the country – or swapped for assets that can.

‘The idea is that some of the income produced every year would be given back to all citizens over the age of 18, perhaps in the form of a citizen’s dividend,’ he wrote.

‘Over time the citizen’s dividend and reverse tax credit could form the basis of a universal basic income and create a greater sense of belonging to all of our people. We welcome other practical, effective ideas on how to achieve this goal quicker.’

He also hailed Barbados’ decision to offer free higher education, a policy that was introduced in 2018, as another example of the country’s ‘universality’. 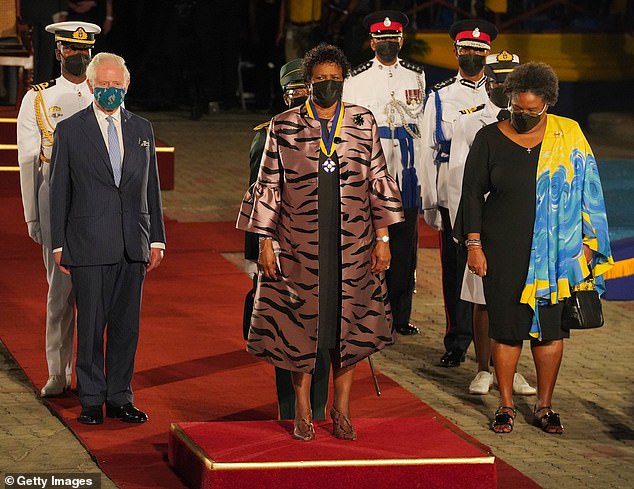 (L-R) Prince Charles Prince of Wales is joined by President of Barbados Sandra Mason, and Prime Minister of Barbados Mia Mottley as they prepare to depart following the Presidential Inauguration Ceremony at Heroes Square on November 30, 2021 in Bridgetown, Barbados

‘We are moving towards universal basic income across three fronts,’ Persaud wrote.

‘Despite all the pressure from international agencies to ‘target’ we hold the line on universality. That’s why we restored free tertiary education for all.

‘International studies have shown this is critical to social mobility and opportunity. The less well-off cannot take on the payments, risk and worry of getting heavily in debt to secure their future.’

Persaud also pointed to the country’s new ‘Business Interruption Benefit’ that the self employed, as an initiative that already gives the group some universal basic income, and chastised a previous government for removing the tax credit that was later reintroduced by his administration.

‘Barbados’ highly innovative reverse tax credit, introduced by the Owen Arthur Administration – the envy of many developed countries – was the first [foray] into a universal basic income. That was long the objective.

‘This is one of the practical ways a developing country could quickly get to the universal basic income. Therefore, it was regrettable that in 2016- 2017, the last Government stopped paying it – they said they had no money. But everything is a tradeoff,’ Persaud wrote.

‘Like free tertiary education, they should have prioritised this kind of instrument. Since 2018 it has been paid and extended.’

Persaud’s comments come just two weeks after the Queen’s role as head of state of the island came to an end, with the nation instead becoming a republic with a president. 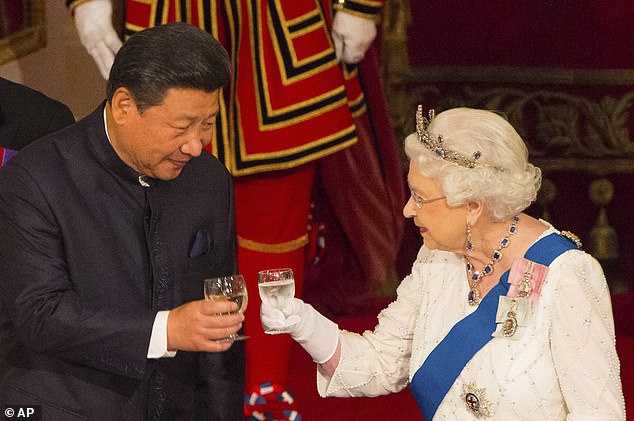 Putting an end to the Queen’s 55-year-long role as its head of state, Barbados became a republic. But more significantly, as well as losing a monarch, the West Indian island gained an emperor

The move by the nation’s politicians to turn it into a republic came more than 50 years after it became fully independent in 1966.

But as it severed its ties with the Commonwealth, Barbados has become closer with Beijing, which through its belt-and-road programme has pumped more than $6 billion into the Caribbean since 2013 – concerning many in the West.

Barbados alone has reportedly received $400 million from China, which will likely go towards improving infrastructure.

However, according to Bloomberg, other countries such as Uganda and Sri Lanka that have fallen into debt with Beijing have had to surrender land and assets.

Barbados has insisted this will not happen in their case, but it is otherwise unclear exactly how the country will fully fund programmes such as its proposed UBI.

How would Universal Basic Income work?

Universal Basic Income (UBI) has been mooted in different forms across the world, although there have been few large-scale examples.

The idea has become increasingly scrutinised as automation progresses, with concerns that machines could render many traditional jobs redundant.

The main features of the policy are that it covers essential costs for every individual, without being means tested.

Various levels of payments have been mooted, with some suggesting a level of £1,000 per month in the UK.

But critics point out it would be eye-wateringly expensive, and could remove the incentive for many people to go to work.

In 2020, a study found that a UBI experiment in Finland made people happier but did not improve employment levels and would be ‘unsustainable’.

2,000 unemployed people were given a €560 (£490) basic income every month in a two-year trial to see whether the system would work better than traditional benefits. 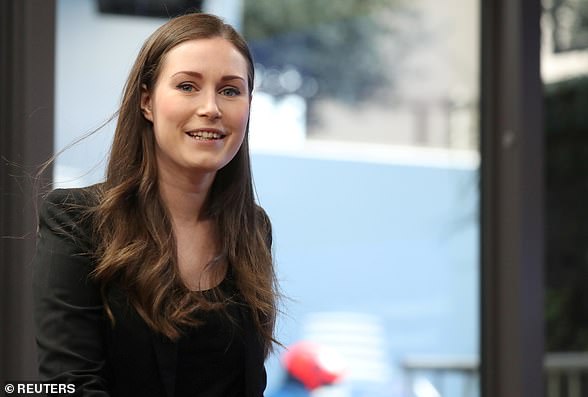 Participants in the Finnish study ‘were more satisfied with their lives and experienced less mental strain, depression, sadness and loneliness,’ researchers said.

But the Finnish study found that the handout led to people being employed for only six more days over a one-year period.

Finland’s prime minister Sanna Marin does not plan to introduce such an income, although her health minister said the experiment would be useful for future social security reforms.

Advocates of a so-called universal basic income argue that it cuts bureaucracy and say that people will be more willing to take on temporary or part-time work if their benefits will not be cut as a result.

Traditional unemployment benefits in Finland can be docked as soon as the recipient starts earning money.

In the experiment, people were given the handout regardless of whether they were working or not, and were free to spend the money however they wished.

Researchers said people who received the money ‘described their well-being more positively’ than those who did not.

‘They also had a more positive perception of their cognitive abilities, i.e. memory, learning and ability to concentrate,’ researchers said.

The guaranteed monthly payment also led to participants becoming more trusting of others and in the institutions of society. 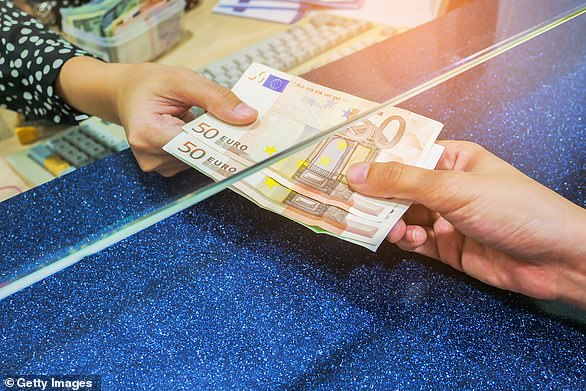 In Finland’s study, 2,000 unemployed people were given a €560 (£490) handout every month in a two-year experiment to see whether the system would work better than traditional benefits

But Kari Hämäläinen of Finland’s VATT Institute of Economic Research said the basic income had only a ‘small’ effect on employment levels.

The results suggest that for many people, ‘the problems related to finding employment are not related to bureaucracy or to financial incentives,’ he said.

Creating such an income across the country would be expensive and ‘unsustainable’, he said, according to Bloomberg.

The Helsinki government allocated €20million (£18million) to the two-year trial.

The Paris-based Organisation for Economic Cooperation and Development (OECD) has previously claimed that a basic income programme in Finland would not be economically viable and could leave significant numbers of people worse off.

Similar schemes have previously been trialled in Kenya, Canada, India and parts of the United States.

In 2017, Swiss voters rejected a proposed universal basic income in a referendum after critics slammed the idea as rewarding the lazy and the feckless.

Although the Finnish trial was the widest to be conducted in recent years in Europe, it was limited to participants who were already unemployed.

The experiment began in 2017, but has taken on an extra significance because the coronavirus pandemic has prompted growing calls for a universal basic income.

The global economic standstill is likely to cost tens of millions of jobs around the world as many countries suffer disastrous slumps in output.

In addition, experts have suggested that people will be more able to follow public health advice if they have the security of a guaranteed income.

Some countries have, in effect, introduced temporary basic incomes by sending people cheques as part of stimulus packages.

Prior to the coronavirus crisis, Finnish trade unions called instead for employers to pay living wages that do not need to be subsidised by benefits.