Jakarta: Australian and Indonesian peacekeepers could co-deploy to a conflict zone in the future, following discussions between the two nations' defence and foreign affairs ministers. 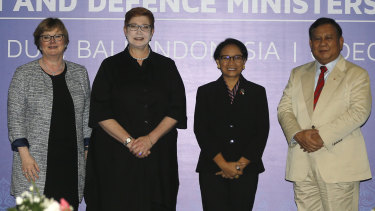 She also anticipated the Australia-Indonesia free trade deal, which has been signed by both countries but not yet ratified by the Indonesian Parliament, entering into force.

"Today we have discussed ways to expand the depth, and also the complexity of our defence relationship. Together, with our respective foreign ministers, we have agreed to deepen our cooperation in the areas of peace keeping, humanitarian assistance and disaster relief, and of course maritime security," Senator Reynolds said.

"Most notably, we’ve agreed to progress planning for Australia and Indonesia to co-deploy on a United Nations peace keeping mission. This is a very exciting new chapter of our defence relationship." 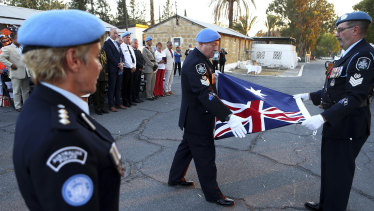 Australian U.N police officer fold the Australian flag during a flag-lowering ceremony to ended Australia’s peacekeeping contribution in Cyprus in Nicosia in 2017.Credit:AP

Indonesian Defence Minister Prabowo Subianto, a former general and failed former presidential candidate who was a controversial new appointment to Mr Joko's cabinet because of his questionable human rights record, said Indonesia saw Australia as a friend and important partner.

"We can choose our friends but we can't choose our neighbours. That's why it is in our interests, Indonesia's interests too to have the best relationship with Australia," Mr Prabowo said.

"We discussed the possibility for the first time of a co-deployment in peacekeeping operations for the UN. This is something new we are trying to pioneer. In the matter of defence co-operation, we want to be better."

No details were given on how such a deployment would be managed.