Any packages sent from Indonesia and China will be screened for foot and mouth disease, the federal government has confirmed, as authorities worked to install Australia’s first sanitation mats at Melbourne Airport on Monday night to avert a disastrous local outbreak of the virus.

The commitment to expanding mail surveillance comes after the federal government promised the strongest ever biosecurity controls at airports, but travellers arriving from Indonesia reported little scrutiny when passing through customs on the weekend. 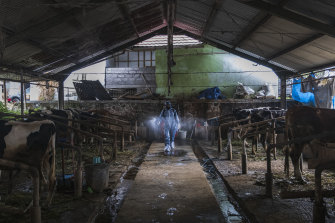 An officer sprays disinfectant at a cattle farm infected with foot and mouth disease in Yogyakarta, Indonesia.Credit:Getty Images

“The biggest risk of this disease getting into Australia is actually through animal products being brought in either through the mail or freight,” he said. “And that’s why we need to really take that aspect of things seriously and resource it properly as well.”

Just one case of foot and mouth disease in Australia could shut down the country’s livestock export trade for months, and the federal government has estimated the cost of a major outbreak could reach $80 billion.

The government has fended off criticism from the opposition that it has acted too slowly to Indonesia’s outbreak, confirming on Monday that x-rays and sniffer dogs would be used to screen all packages sent from Indonesia and China.

Australia Post was unable to disclose the exact number of parcels that arrive from Indonesia and China each year but said the number was in the millions.

Watt said passengers could expect to see sanitation mats at airports across Australia in the next two days.

He said about 3700 passengers were questioned, inspected or stopped at Melbourne Airport on Saturday alone.

A Department of Agriculture spokesman said the sanitation foot mats were being deployed in Melbourne from Monday, but the department would need the support of airports to put them in place. 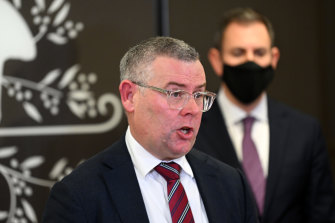 Agriculture Minister Murray Watt said sanitation mats would be installed in airports across Australia in the next two days.Credit:Getty

“Testing will look at how the mats work, where they are best located and how travellers can use them,” he said. “Mats serve as both a visual reminder for travellers and a cleaner for the shoes being worn.”

It was not clear whether the mats would be ready for a flight from Denpasar, Bali, landing at Melbourne Airport at 8pm on Monday.

The spokesman said the biosecurity controls included “100 per cent profiling” of all passengers entering Australia from Indonesia in addition to risk assessments, questioning and shoe cleaning of travellers.

Indonesia is struggling to contain an outbreak of the fast-spreading virus, which has now reached Bali. Virus fragments have also been detected on imported food in Melbourne.

He said the government also needed to declare the threshold for shutting the borders with Indonesia to prevent a local outbreak.

“If we do have to pull that trigger, we need to say to the Indonesians, this is the point,” he said. “That is what a good neighbour and good governments should do.”

Foot and mouth disease is a highly contagious virus that affects cloven-hoofed (two-toed) animals, including cattle, sheep, goats, camels, deer and pigs. It does not affect humans. 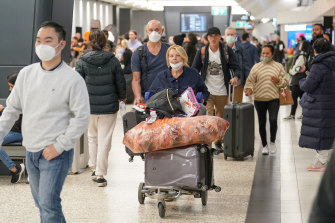 Symptoms usually begin with a high fever, followed by painful blisters inside the mouth and on snouts, teats and feet that can take up to 10 days to heal.

The virus can spread through mud or manure on farm machinery, shoes and clothing. It can also survive inside people’s noses for 24 hours.

National Farmers Federation president Fiona Simson said she was pleased with the new mail surveillance commitment but called for even stronger biosecurity measures.

“We still want to see 100 per cent screening of all passengers returning from high-risk areas, more frontline biosecurity officers and a constant review of physical and technological screening methods,” she said.