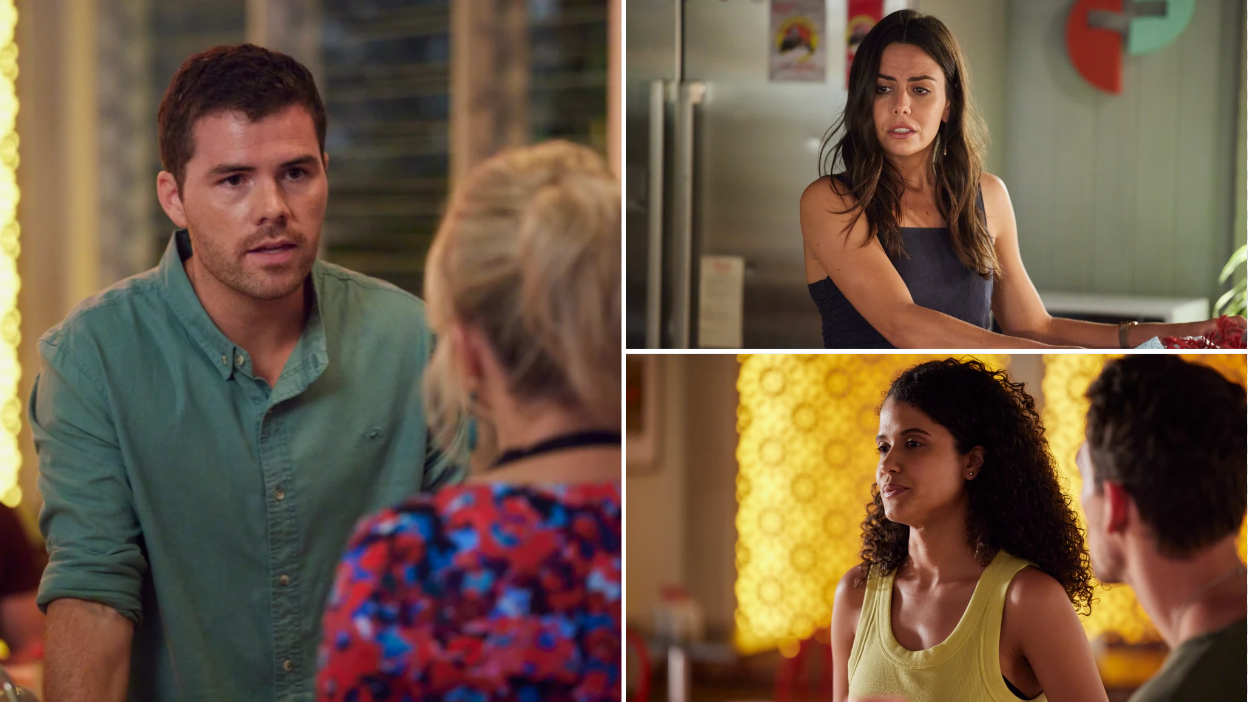 This week on Home and Away, a few love triangles are forming in the aftermath of Jasmine (Sam Frost) and Bella (Courtney Miller) leaving the Bay. After spending the night together, Rose (Kirsty Marillier) and Cash (Nicholas Cartwright) are awkward around each other, and when Rose is rude to Irene (Lynne McGranger) Xander (Luke Van Os) figures out why – it must be because she has feelings for her sister’s boyfriend!

Plus, Tane (Ethan Browne) is worried about Nikau (Kawakawa Fox-Reo) as he obsesses over Bella and spends all his free time trying to get in touch with her. However, after a major lifeguard rescue earns the admiration of newcomer Naomi, will Nikau be about to get a distraction in the form of another woman?

Here’s what’s coming up for the week beginning Monday July 25.

Does Rose have feelings for her sister’s boyfriend?

Rose confronts Cash over his secrecy after their night together, wanting to know why he’s keeping Jasmine in the dark. It will become an issue when it wasn’t one – nothing happened between them. However, Cash says he doesn’t want to upset Jasmine when she’s got enough going on. Later, Irene invites Xander and Rose to dinner, but Rose rudely declines the offer. Irene is perplexed and asks Cash what that was about, but he’s still a locked vault. Meanwhile, Xander has worked out why Rose was so rude – she has feelings for Cash, doesn’t she? He holds her as she admits that she’s liked him since the day they first met…

Tane and Felicity take their relationship to the next level?

Tane is happy to be on the mend after the stabbing, and he decides to go back to his full duties at the gym. He’s tired of being stuck with paperwork and admin, and he wants to go back to overseeing bootcamps. Felicity is cautiously optimistic, but the couple takes the opportunity to celebrate anyway. Realising Tane will be OK now, Felicity starts to pack her bags. When Tane comes back on a high from his first full day back at work, he’s disappointed to see Felicity’s bags. Feeling vulnerable, he hesitantly asks Felicity if she wants to move in. Felicity is shocked – is their relationship ready for this?

Marilyn proves to be a tough boss as newcomer Tex arrives

Marilyn has been struggling to manage her shifts at the Diner on top of keeping an eye on Alf’s various business responsibilities. Realising it’s too much for her, an ad goes out for a handyman, and it’s not long before there’s interest. The first person to arrive for an interview is Tex, and his charm quickly wins Marilyn over. However, once Alf gives the green light for the employment, Marilyn’s attitude changes. On day one, Tex enters the Diner to get breakfast – but Marilyn barely lets him finish eating before getting him to work. Irene tells her to relax, but Marilyn is keen to micromanage…

Tane worries for Nikau as he wallows in heartache

Tane and Felicity are celebrating his return to work when they are interrupted by a miserable Nikau returning home. They try to engage him in conversation, but he’s not keen to participate. Instead, he’s caught up with wistfully staring at his screensaver of Bella. Later, Felicity asks him if there’s something she’s doing wrong, but Nikau says it’s not her. He’s just struggling to live in a house with two loved up couples when his girlfriend is on the other side of the world. Tane catches Nikau looking up flights to New York and begins to realise how much his nephew is struggling…

Theo begins to doubt his ability to complete TAFE

Theo has an important TAFE assignment to complete, but he’s distracted by Chloe and the new couple can’t keep their hands off each other. Chloe is keen to have more of Theo’s time now that his community service is over, and he can’t say no to her despite his urgent deadline. Justin warns Theo not to leave his work to the last minute, and eventually he goes home to face the laptop. However, when both Theo and Justin take a look at the assignment, even Justin admits that TAFE assignments never used to be this complicated…has Theo bitten off more than he can chew?

Leah helps to get Chloe excited about business management again

Chloe has been desperate to claim more time with Theo once his community service finishes, but when he snaps that he has to do his assignment her feelings are hurt. Justin and Leah notice the tension and decide to help the young adults get back on track. While Justin goes to help Theo, Leah suggests to Chloe that she used to run her own business once – maybe she could consider doing similar again? Chloe initially rejects the idea, but after a pep talk from Tane she begins to realise it could be time to start improving her skills in business administration.

Nikau is catching up with Bella on the phone when his lifesaver radio kicks in – there’s a swimmer in distress in the water. Nikau immediately leaps into action, jumping into the rescue boat and searching the waves until he finally sees a woman calling out for help. He dives in and grabs her before heading back to shore, where he performs CPR until she regains consciousness. The woman’s sister, Naomi, says she’s so grateful for Nikau’s work she wants to offer him a thank you lunch. Has Nikau earned himself a new admirer?

Mackenzie prepares for a prison sentence

Mackenzie returns home from her trip to see the lawyer, and although Ziggy tries to lift the mood, nothing will distract her from the fact she could be facing prison time. Ziggy and Dean are surprised by how level-headed she ends up being, going to work as usual, but later that day they see her in tears in the storeroom in Salt. She then decides to make the most of her final day before the hearing and begins planning her bucket list goals to achieve. Is Mackenzie getting her last bit of fun in before she potentially goes to a prison cell?