Tirana: Police used tear gas late on Wednesday, local time, to disperse hundreds of Albanians protesting the killing by police of a young man who authorities said had violated an overnight curfew imposed to halt the spread of the coronavirus.

A 25-year-old man identified by Albanian media as Klodian Rasha was killed early on Tuesday in what police described as an excessive use of force by an officer during a curfew introduced to prevent a surge of coronavirus cases. 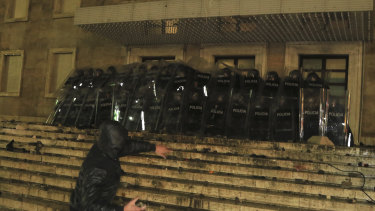 Police officers protect themselves with their shields as a protester throws a stone outside the Prime’s Minister office during clashes in Tirana, Albania.Credit:AP

The police had first said that Rasha failed to obey a police officer's order to stop and that he had carried a weapon. But later the police said the man was holding an object but not a weapon.

Protesters who were demanding the resignation of the interior minister threw objects at his ministry and set Christmas trees on fire as police used tear gas to disperse the crowd, a Reuters witness said.

They broke windows in other government buildings including Tirana mayor’s office, a Reuters witness said.

Police said nine officers were injured of whom three sustained more serious injuries in the head and body and were treated in hospital. There were no immediate reports of how many protesters were injured or arrested. 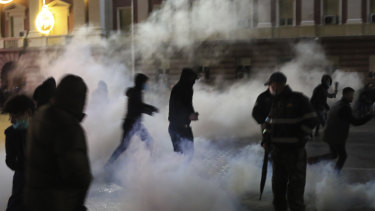 Protester walk among smoke by tear gas during clashes outside the Prime’s Minister office in Tirana, Albania.Credit:AP

Tirana was calm after a police chase of protesters ended.

A police officer was arrested and an investigation has begun into the shooting of the man, authorities said.

"The police officer did not act according to the law while using his firearm," Albanian police said in a statement.