A city of fear and defiance: In besieged Kyiv, RICHARD PENDLEBURY and photographer JAMIE WISEMAN witness awesome fortitude of citizens preparing to face down Putin

On Zhytomyrska Street this morning a man drives past in his Mazda convertible.

The sun is shining – real warmth – and he has the roof down, no doubt for the first time since autumn.

This, surely, is the very definition of insouciance.

Because here, in Kyiv, it’s getting hotter in every sense.

The vapour trails in the brilliant blue skies above are not those of Easyjets on their way to the Spanish costas, but air defence missiles noisily chasing Russian planes and cruise missiles.

Good to have a roof over your head – better still to be in a basement.

In the hour before sunrise the capital was awakened by thunderous air strikes that badly damaged apartment blocks, killing at least five people.

Another pre-dawn attack struck an industrial target in the very heart of Kyiv – the first time the Russians have hit the centre of this huge city in this way.

By the time you read this those Kyivans who remain here – about half the peacetime population of 3.5million – will be under their second lockdown of the war; the 35-hour street curfew will run until tomorrow morning.

‘Today is a difficult and dangerous moment,’ Mayor Vitali Klitschko has told his people.

‘This is why I ask Kyivans to get prepared to stay at home for two days, or if the sirens go off, in the shelters.’ 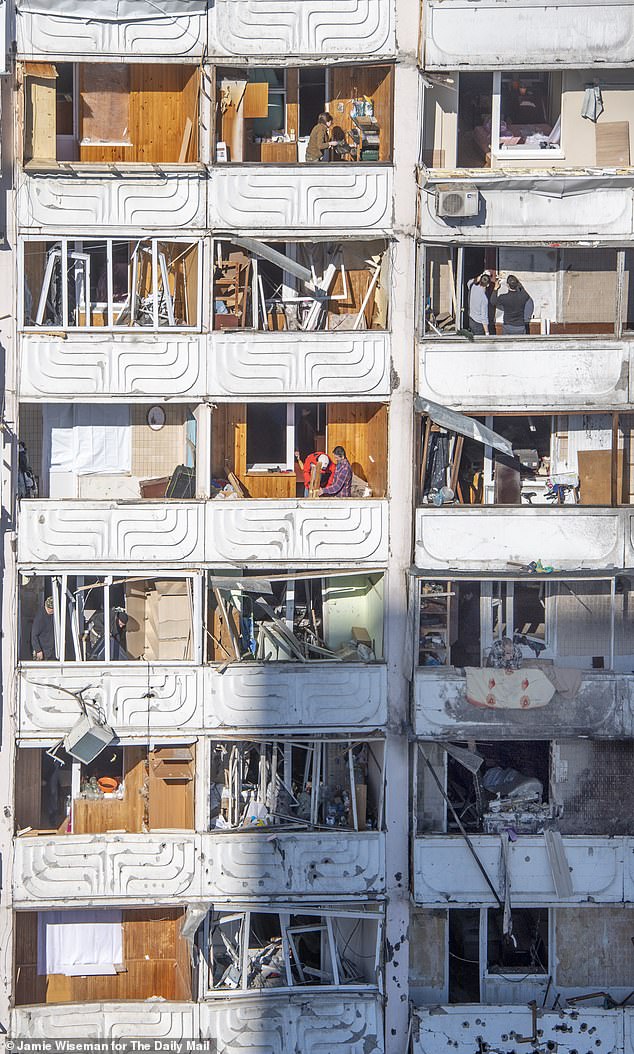 Shattered: This block of flats in the Mostytska district of Kyiv was wrecked when a Ukrainian air defence missile brought down a Russian cruise missile yesterday

And so Jamie and I take a valedictory tour of the city before these restrictions are imposed.

We find scenes of fresh devastation and a population on edge.

But also defiance and miraculous escapes from the Russian missile blitz.

As we set off, a queue is forming outside our neighbourhood store.

The vegetable display now consists of a single unwanted cabbage, brown around the edges.

No, the shopkeeper tells the couple in front of us, she will still not sell them beer. Mayor Klitschko has forbidden the sale of alcohol until hostilities cease.

Across the road, the chi chi boutique, in the window of which I have often admired the colour of an electric green suit, has been boarded up since I last passed, the previous evening.

Fashion is out. Plywood is now at a premium here.

Fortress Kyiv is changing every day.

At the junction of Hlybochytska and Sichovykh Striltsiv Streets our way is newly blocked by two old tramcars that have been hauled from their retirements in some junk yard to be turned into a military barricade.

Beyond that we come upon the first evidence of Russia’s endeavours in the early hours. The Artem plant on Yuriia Illienka Street has been hit by a missile strike. The collateral damage is evident for several blocks.

The streets glitter with shattered glass, as thick as sand on a beach.

Among the victims is the historic ‘Little Opera’ house, dating from 1900.

The entrance doors are hanging off their hinges, the windows are blown out and a canvas hoarding that advertises what should have been the current play – How Dare you Die – is reduced to rags.

Inside is no better. Part of the ceiling has collapsed, the chinoiserie wallpaper is in shreds, house plants have been blown off window sills and a children’s art room is a wreck. 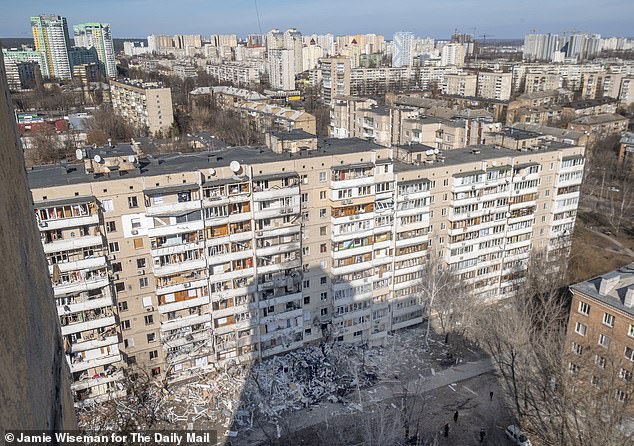 In the hour before sunrise the capital was awakened by thunderous air strikes that badly damaged apartment blocks, killing at least five people

Administrator Anatoly was in the basement when the missile struck. ‘In the first seconds I thought there had been some kind of big accident,’ he admits.

‘It’s still hard to appreciate that our city is under attack.’

He says that two weeks beforehand he and a friend had discussed the safety of being so close to the Artem facility, which makes photographic equipment and other items that might be of military use: ‘Well, we were right to be worried!’

As we get closer to ground zero the peripheral damage becomes more intense.

Neighbouring businesses have been destroyed.

Flora de Lux will not be supplying blooms again unless it undergoes a major repair.

The Beauty Club salon is unable to titivate Kyivan ladies without a big clean-up.

The local branch of McDonald’s has been knocked out of action.

And it will be a while too before the 496 bus stops here.

The shelter took the brunt of the blast. Knots of locals have gathered to view the aftermath.

The sirens start again and I see fear in the eyes of these onlookers.

All around us is proof of Putin’s malevolence.

This is as much a war of psychological attrition.

We leave to visit a residential estate that was also struck this morning.

Mostytska Massiv – a neighbourhood of Soviet era blocks – was probably not the intended target.

But when, a little after 5am, a Ukrainian air defence missile intercepted a Russian cruise missile that was approaching the city from the north – perhaps on its way to the Artem factory – the combined wreckage fell beside one of the ten-storey blocks, igniting the building’s gas main, blowing out windows and splattering the lowest six storeys with shrapnel. 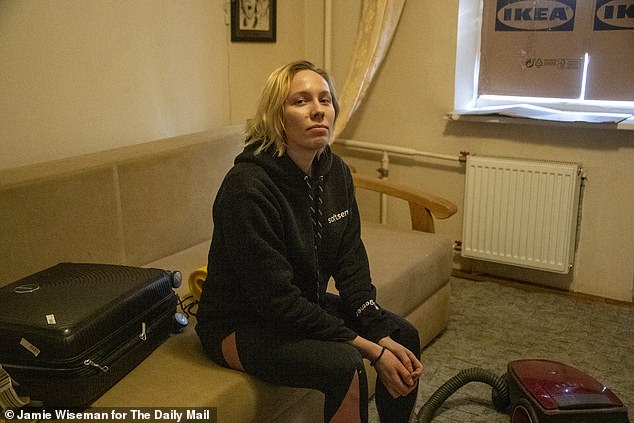 Sasha is a 24-year-old IT worker. She lives on the fourth floor of the ruined block and her Afghan rug is still covered in glass

We watch the residents throwing wreckage from their balconies to the ground below. It is spring-cleaning, Kyiv-style, thanks to President Putin.

Debris – particularly glass, continues to drop from above, unaided.

In the background there is the regular growl of more air defence missiles being launched.

Tamara is 71 and tells me she has lived in the area all her life.

She draws back a curtain on her balcony to reveal a display cabinet that had held her best glassware: ‘Look, all smashed.’

Behind her there is an etching of a tropical island sunset, now very much askew.

‘I wasn’t sleeping, I was lying with the blanket over my head, which has become my habit since the war started,’ she tells me.

‘I heard the first blast and then there was a shockwave. My neighbour on the second floor had to throw his fridge from the balcony because it was on fire.’

In the lift to the 17th floor of the adjacent building residents are bringing down their most precious belongings and preparing to leave their homes.

All that is being taken up is plywood and other hoardings for the now glassless windows.

Mother of three Lena is also the mother hen of the estate, being the administrator of its wartime Viber chat group.

‘Just after the blast my phone went crazy with messages, all saying “I’m fine”,’ she says.

‘Fifty per cent of the residents had already left. But now there is an old lady in her eighties who has lost all the glass in her windows.

‘Some people have freaked out and are leaving but I won’t. There is a saying that “The shell doesn’t hit in the same place twice”.’

Following her explanation we both touch the nearest piece of wood.

She lives on the fourth floor of the ruined block and her Afghan rug is still covered in glass.

She had been in her bed beside the window but had the presence of mind to run to the bathroom after the first blast and before the missiles fell to earth.

‘And when I came back the French window frames were lying on my bed!’ she recalls.

She is very cross. ‘There were several apartments on fire. Tell Putin to stop this.’ 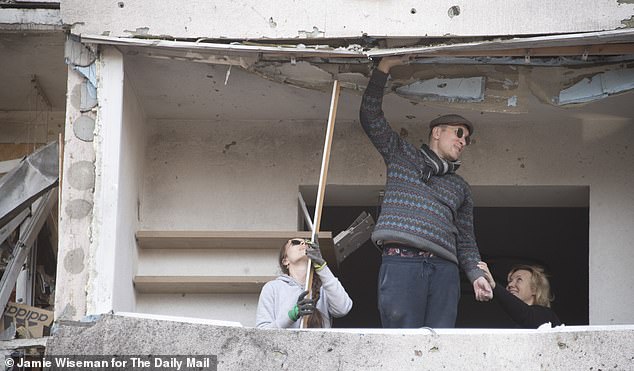 Then she adds ‘Putin had!’ – which translates roughly as ‘Putin is a bastard’.

On our way back into town we see boy soldiers digging foxholes in a suburban railway embankment.

Another barricade consists of an ancient lorry, several hundred tires and a fridge. Desperate times.

The prime ministers of Poland, the Czech Republic and Slovenia are here today to meet President Volodymyr Zelensky.

It is the highest-level EU delegation to go to Kyiv since the war began.

But some visitors will not be going home.

Two days ago my neighbours at breakfast were Irish cameraman Pierre Zakrzewski and Ukrainian journalist Oleksandra Kuvshynova, both working for the American TV network Fox News.

Yesterday it was confirmed that they had both been killed by Russian artillery on the edge of Kyiv.