For anyone who has ever woken up with a hangover from hell and a mouth like the bottom of a budgie's cage, Animals will ring some familiar, and possibly discomfiting, bells. It follows two party girls, Laura and Tyler, as they lurch from one glass to another in a city famous for the furnishing of hangovers.

The original novel by English writer Emma Jane Unsworth was set in Manchester. This adaptation, also by Unsworth, moves effortlessly to Dublin, where the pubs are nicer anyway, never mind the tax incentives from the Irish Film Board. With post-production in Adelaide, money from the Adelaide Film Festival and Screen Australia, and an Australian director, Sophie Hyde, it's a bit of a bastardy production, although the technical term is an Irish-Australian co-production. 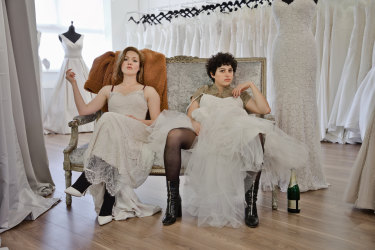 It doesn't really matter where it comes from: its concerns are universal. It's not so much a comedy about the joys of getting out of it as a drama about the choices everyone has to make as they get older about when, if and how they will rejoin the human flow. In that context, the lead character makes the theme explicit by quoting W B Yeats's The Choice:

The intellect of man is forced to choose / Perfection of the life, or of the work / And if it take the second must refuse / A heavenly mansion, raging in the dark.

Laura (Holliday Grainger) only mentions the first two lines but we already know she is struggling. At 32 she has been through a decade of hard partying with her best friend, expatriate American Tyler (Alia Shawkat). Laura has been working on a novel for 10 years, with 10 pages to show for it. Tyler, clearly in love with her, enables her to avoid doing the actual work of writing with a hundred excuses – notably the old one about writing being about "inspiration".

As Laura realises that she must get to work, Tyler refills their glasses. When Laura falls for an intense, dark-haired classical musician called Jim (Fra Fee), Tyler unleashes a devious campaign to disrupt the romance. Her whole world is threatened.

It's a tribute to Sophie Hyde's work that these two gals, with tinkling white wine glasses and cackling laughter, become fully engaging women on screen. I don't remember any movie where two actors have had to perform so many scenes one-handed, but both Shawkat and Grainger give it their all.

The friendship of Laura and Tyler is deep and soulful, even if their early scenes are burdened with over-written "witty" dialogue. Tyler, so lonely and needy, is achingly human. Laura's warm and funny Irish family welcomes the sharp-tongued Tyler, who's never as generous in return. She can't be: for her, families are a curse from which you escape, like marriage and the suburbs.

Laura looks longingly at her sister Jean (Amy Molloy) with her new baby, remembering that Jean was once even wilder than Laura. Which will Laura choose to perfect, the life or the work? Whenever she sits down to write, her self-doubt is paralysing. A country renowned for its drunken writers offers her no help – Laura drinks to avoid the work, rather than liberate her voice. Tyler drinks to outrun the pain of her childhood, in which we suspect there were dark things.

Hyde keeps us close to these two women, remaining clear-eyed even as she celebrates their bond and their sense of freedom. Jane and Tyler are so bound to each other that not taking a drink feels like a betrayal. Each is starkly aware of their dilemma. We get a number of scenes in which a fox prowls the streets at night – one of several wild animal references – and Laura sees herself in its eyes. The metaphor clangs a little, but we see her point. And Holliday Grainger's performance is so good that we never doubt her connection to the fox: out of its natural place, fearful, somewhat lost, but free.

It's a difficult film to sustain because there's nothing immediately attractive about seeing two beautiful young things pissing their lives away. Hyde overcomes this by offering up two intense characters that grab and hold as they stumble towards self-awareness.