Even before “The Queen’s Gambit” showrunner Scott Frank considered shooting in Berlin, he knew he had found his first-choice for a production designer when he saw Uli Hanisch’s work in the 2017 German neo-noir television series “Babylon Berlin.”

“Whenever you ask [Frank] now, he says ‘No, no, I came to Berlin because of the designer,’ but the real truth is it was a bit of both,” said Hanisch in an interview with IndieWire “You have to go where the locations are.”

Berlin might not be the obvious choice to tell the period story of a midwestern chess prodigy, but East Berlin’s 1950s – 1980s architecture supplied the right mid-century modern style for various U.S. cities of that era, as well as offered exciting options for the big international tournaments.

“It has a lot to do with the history of Berlin and how we have the Western part — we have some classical architecture of course, where we can represent Paris,” Hanich said. “Then on top of that, we have the Eastern part, where they were trying to imitate Moscow.”

Yet finding the right locations is just the first step. How to convert them into the story world of “The Queen’s Gambit” is the challenge and craft behind Hanich’s incredible production design. Here’s the backstory of three of the limited series’ most memorable backdrops. 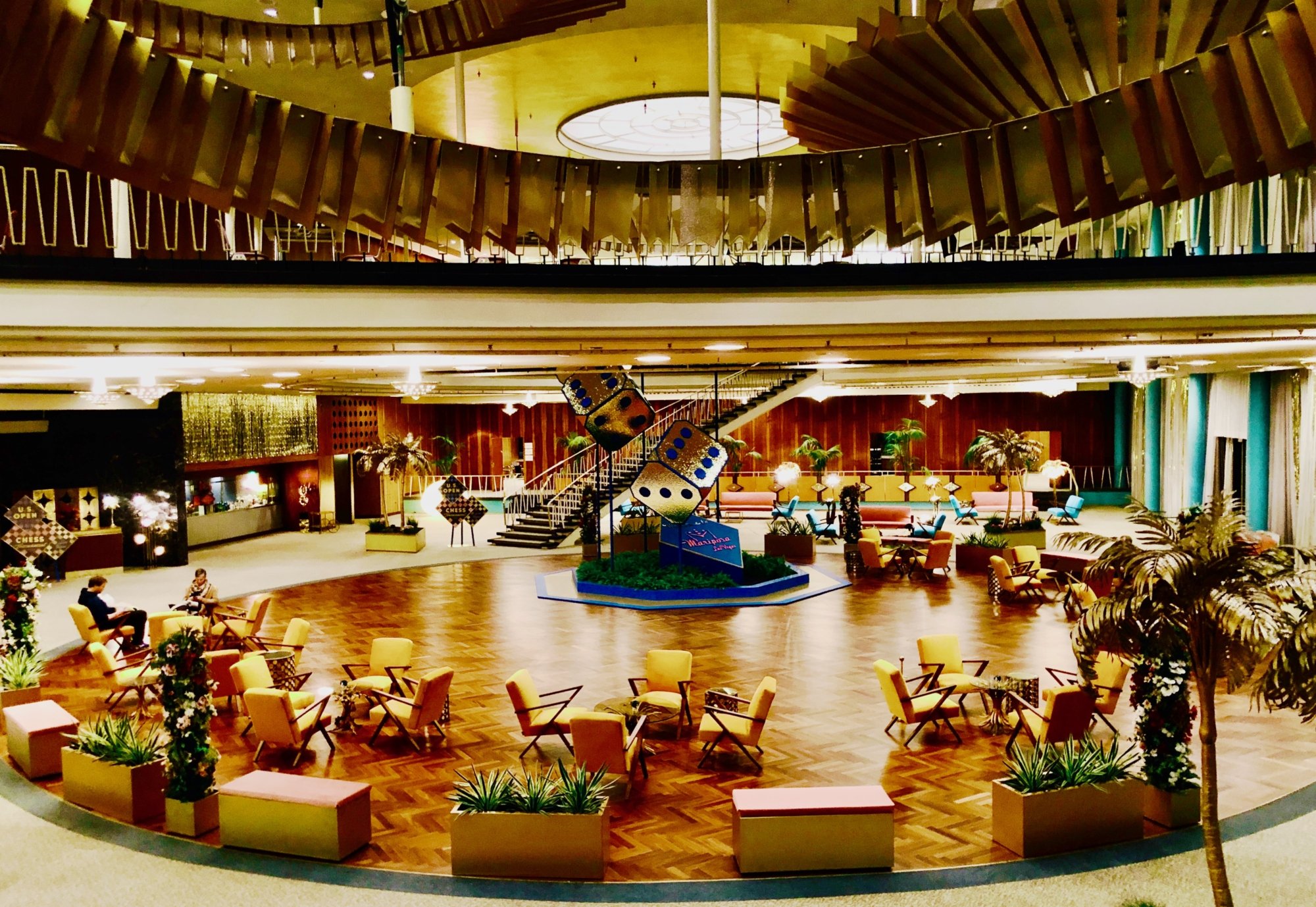 One of the first locations that Hanisch showed the producers of “The Queen’s Gambit” was Palais am Funkturm, which Hanisch was familiar with from the German Film Awards party. Its vast lobby would go onto be used for little more than a single establishing shot when Beth Harmon (Anya Taylor-Joy) arrives at the Mariposa Hotel in Las Vegas for her first out-of-state tournament.

“It was very important to establish the whole feel of her suddenly being in this overwhelming, kinky Las Vegas surrounding, so of course we had to dress the entire place, including the lobby,” Hanisch said. This led to the challenge of how you fill such a huge space, that would require, according to the production designer, between 60 – 80 pieces of furniture.

“The set decorators were getting a bit scared and then we found this amazing little furniture manufacturer right in Berlin, but they were very small,” said Hanisch. This led to negotiations of how this could be mutually beneficial for both parties. “So we got this deal with them: They produced the amount of furniture we needed. They rented them to us and then took them back to sell them. So, it was a win-win situation for both of us. Without them, I don’t know what we would have done.” 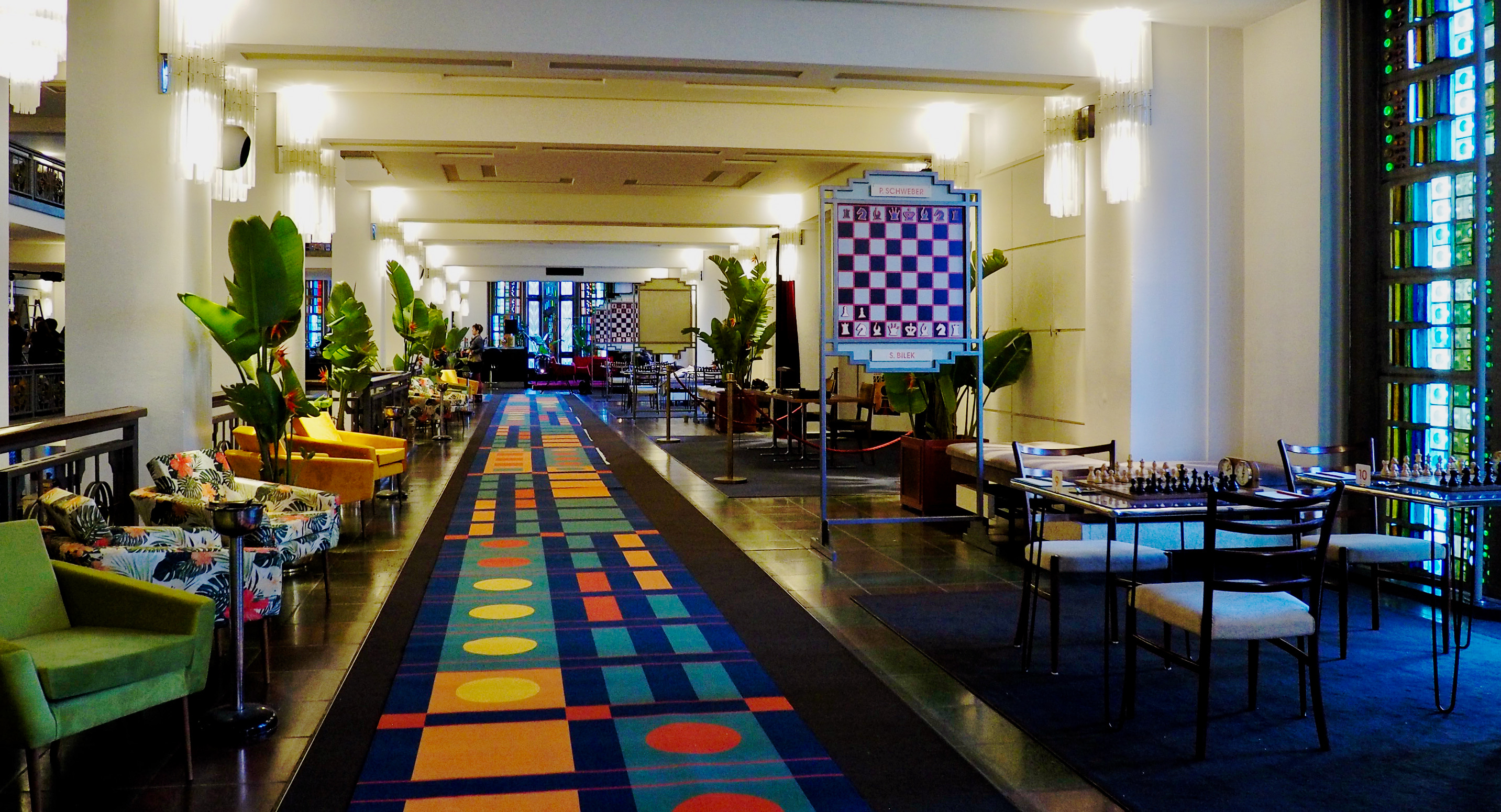 Perhaps the most spectacular location of the entire series is the fictional Aztec Palace Hotel in Mexico City, which has another stunning split-level lobby, this time with stained-glass windows dominating every viewpoint. The real-life location is the Friedrichstadt-Palast, one of the last public buildings opened in East Berlin during the 1980s.

It’s a busy theater with two shows per day, so the challenge here was getting into the building to dress it for filming — a task that under normal circumstances would require at least two to three days.

“We came up with a plan on our side, to dress it all in one night, in 12 hours, including the colorful carpets,” said Hanisch. “The interior that was there was kind of blank, so we brought in a lot. We brought in all the furniture and demonstration boards for the tournament.”

It’s not always just set decoration that needs to happen, but sometimes more major components need to be added and built to meet key story components. “We even brought in the elevator we needed for the moment with the Russian competitors, where they talk about Beth and don’t know she can understand Russian,” said Hanisch. “It’s an important scene, but it wasn’t there, so we had to build that in.” And yes, the elevator was part of that same 12-hour overnight set dressing. 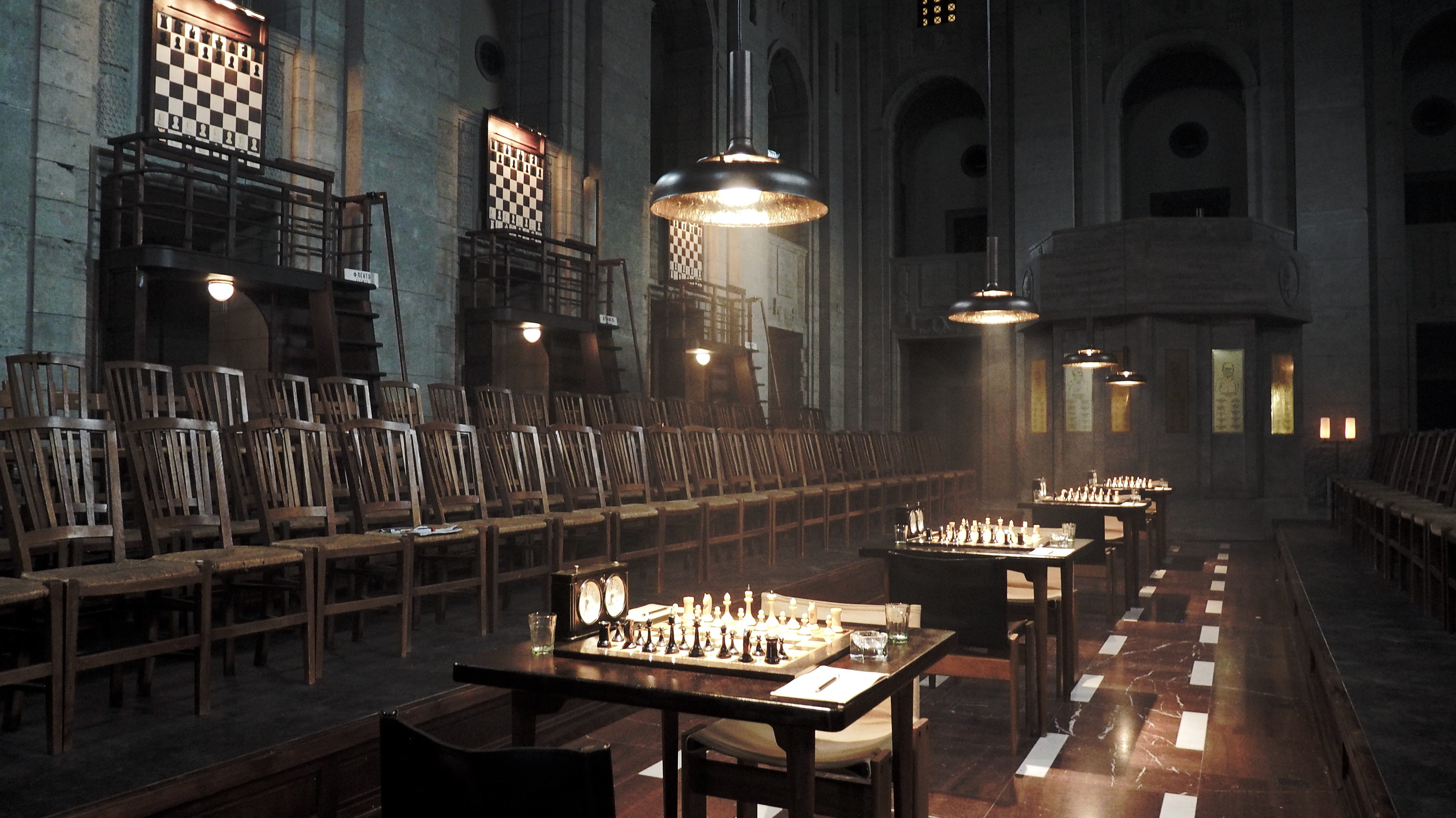 The final challenge for Hanisch was to find somewhere with the right level of intimidation for Beth’s climactic showdown in Moscow. This was found at the Altes Stadthaus, specifically the Baerensaal (the Bear Hall).

“The idea was to look for something that was like a very gloomy and sinister temple or cathedral,” said Hanisch. “Maybe it would be the ‘Temple of Chess’ in Moscow? The idea for the final tournament was to set it up in a way that’s most overwhelming and intimidating for Beth.”

The space gives the feel of watchtowers looming over prisoners exercising in a yard, or surgical demonstrations in the Victorian era, with Beth Harmon the one being dissected. “We came up with the idea of building wooden bleachers for the spectators, for the competitors to be on the lowest part, so the players would be down there and everybody’s looking down at them. Then we had the idea of almost guard towers on the left and right,” said Hanisch. “The whole purpose of this was to make Beth feel small, alone and lost and under huge pressure to finally conquer this.”

“The Queen’s Gambit” is available to stream on Netflix.