Garth Ennis and Darick Robertson’s creation featured the G-Men, who went through “sort of an educational, college experience” 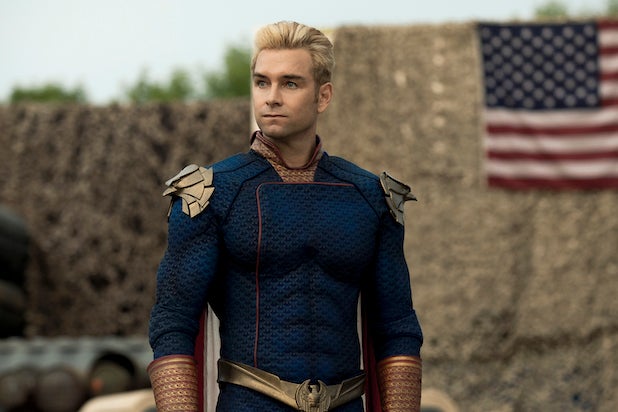 Just a few weeks ahead of “The Boys” Season 2 finale, Amazon Prime Video revealed it had fast-tracked development on a spinoff series set at a superhero college run by Vought International. This untitled potential show will be based in part on the G-Men — a blatant parody of Marvel’s “X-Men” characters — from Garth Ennis and Darick Robertson’s “The Boys” comic book series, according to Eric Kripke.

“I would say it’s loosely inspired by an element of the comics, which is the G-Men. Part of the G-Men is there’s sort of an educational, college experience,” “The Boys” showrunner told TheWrap. “And we just used that as a jumping-off point, kind of similar to ‘The Boys,’ where we sort of take an initial notion and then we are going to run with it in our own weird direction.”

The spinoff series will be executive produced by Kripke, Seth Rogen and Evan Goldberg, who developed “The Boys” for Amazon, as well as Craig Rosenberg, who is writing the pilot.

“Me and Seth and Evan and Craig Rosenberg, we don’t feel the need to jam spinoffs out there,” Kripke said. “We were just talking and we stumbled onto this idea and we were so excited about it, we took it to Amazon. Because we think there’s a real opportunity to see another part of the Vought world. But probably, more importantly, to make a show that isn’t really made that often, which is what we love about it, which is, as ‘The Boys’ is an unflinching look at reality, the goal for this is to make this superhero show one of the most realistic college shows anyone’s made. And really deal with real college issues and really explore what it’s like to be that age.”

If you were wondering whether or not we’ll see “The Boys” crossover with its spinoff — should that show be ordered to series — Kripke isn’t sure just yet. But he does say “we’re not spinning off characters into it, they just exist in the same universe.”

A new episode of “The Boys” Season 2 launched today on Amazon Prime Video.