Tony Vlachos still did not receive any votes on Survivor: Winners at War, and fans are concerned. Sarah Lacina and Tony have a solid “Cops R Us” alliance that no castaways are questioning. Fans want to know why not one person is targeting the Tony and Sarah alliance. 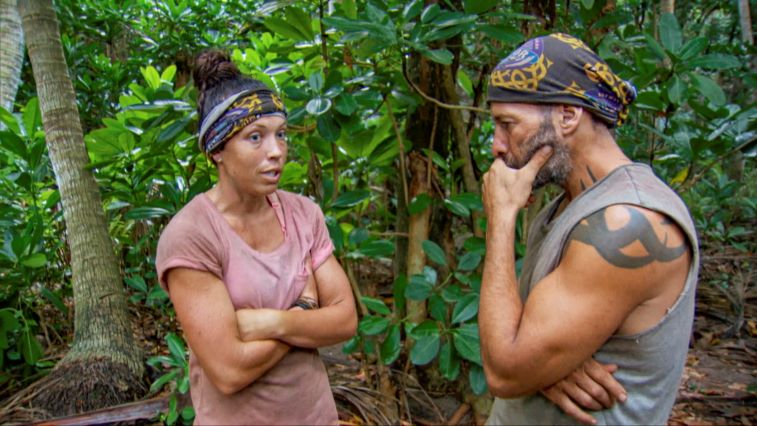 What happened on ‘Survivor: Winners at War’ Episode 13?

Up to this point, Tony has proven that he is a considerable threat to win the $2 million prize on Survivor: Winners at War. However, he lost both immunity challenges in episode 13, and no one wrote his name down.

Although many fans are happy that the Sarah and Tony alliance is alive and strong; others are baffled about what the other contestants are thinking by keeping them around.

The two cops often strategize together and are calling the shots. Although, they let Ben Driebergen think he was the one who decided to vote out Jeremy Collins — Tony and Sarah were the ones behind the move.

Nick Wilson and Michele Fitzgerald played a disadvantage against Ben Driebergen instead of Tony. Michele won individual immunity, but Nick was sent to the Edge anyway. At one point in the episode, Michele tried to talk some sense into Sarah about sticking with Tony; however, it didn’t seem to work.

“Sarah and Tony not being targeted at either of these last two votes is insane,” another fan tweeted. “Legendary players.”

Some fans think that Denise Stapley might have a chance against the “Cops R Us” alliance in the final tribal council. However, other fans are still shocked that the castaways are keeping the cops around.

“Nearly every name in the game has been brought up in this episode except Tony?!” tweeted one fan. “Tony Vlachos. With an idol. No attempt to even flush it. No immunity to protect him. This is unbelievable.”

Many fans believe Tony will win the $2 million if he makes it to the end of the game.

What is the difference between Jeremy and Natalie versus Tony and Sarah?

“So, at the beginning why were Jeremy and Natalie such a threat as a duo, but Tony and Sarah are not being targeted?” another fan tweeted. “Make it make sense.”

Ben and Denise were the two castaways who wanted Natalie Anderson out of the game at the first tribal council, so fans are confused as to why they are allowing Sarah and Tony to continue.

“Sarah and Tony were never seen as a duo,” replied one fan. “Tony had voted Sarah out on season 28 so they had a contentious relationship after their season and didn’t befriend each other until later.”

Some fans feel the cop alliance might be flying under the radar because the pair betrayed each other in past seasons. However, to viewers at home it looks like Tony and Sarah are going all the way together, this time. We will find out when the Survivor: Winners at War three-hour season finale airs on May 13, 2020, at 8 p.m. EST on CBS.