Love and Hip Hop: Hollywood picked up right where the show left off last week with relationship strife, deception, and musical aspirations. Last week, Lyrica was moving toward some sort of cautious and slow reconciliation with A1 for the sake of her baby and career. Viewers also learned that one of Princess and Ray J’s dogs, Boogotti, was dog-napped from Ray’s parents’ house. That brings us to this week. 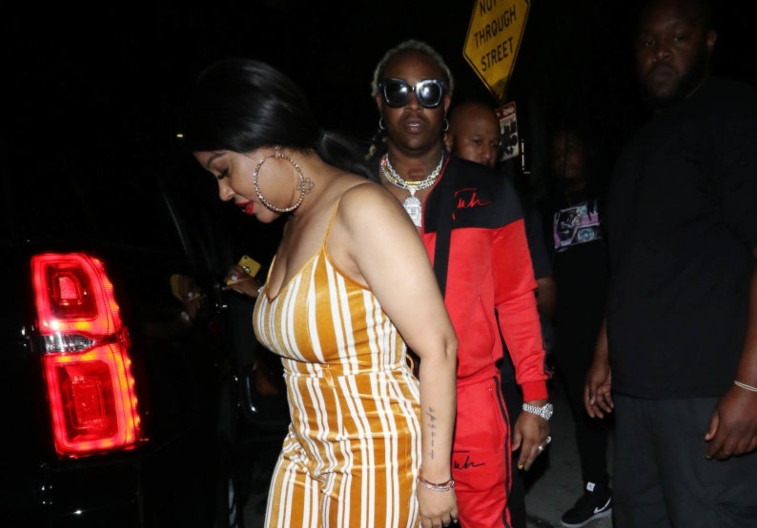 A1 gets jealous; Lyrica is chilling

Ray J, A1, and Zell are scouring the neighborhoods of Malibu for Boogatti (per the psychic’s advice) and then stop to discuss A1’s marital woes. Zell queued up his phone to show A1 and Ray that Lyrica is posting racy Cookie Monster pics on IG. Racy.

Meanwhile, Lyrica is in self-care mode at the spa with Princess, and the two relax, chat, and sip champagne. Princess shares that she received a tip on Boogotti and plans on meeting the guy at a police station. Ray J is out of town, but she’s eager to get her dog back.

Lyrica talks about her hot girl photos and tells Princess about how she popped up at A1’s performance. She shares that she’s contemplating working on her marriage but notes that A1’s been unfaithful more than once during pregnancy. Princess is understanding and advises her to think about it since marriage is tough.

Early in the episode, Apryl is leaving the courthouse with Fizz (Drew) and some of her other friends. She was in court with Omarion, and according to her, they’re fighting over their kid’s school. Per Fizz, his presence didn’t go over well with Omarion’s mother, whom he said shot him a mean look. As for “O,” the two don’t speak. The court drama is pending the judge’s decision.

B2K member J. Boog meets with his cousin Marques Houston, and the two other members from the group Immature. He wants to see if Immature wants to go on tour, but the deal is this: 50% goes to Marques while the other two, Young Rome and LDB, split the other 50% between themselves.

Boog explains that the deal is cut this way because there’s group money and a separate, larger allotment for Marques since he’s been a solo act. LDB (Kelton Kessee) is not with it and walks out, leaving Marques and Young Rome sitting there.

Later, Paris and J. Boog meet up and compare notes about theApryl-Fizz-Omarion situation and how it’s affecting B2K. Boog says there’stension behind the scenes on the tour between the two bandmates but no one isaddressing it. We guess it’s just a matter of time.

Yo-Yo and her family

Yo-Yo hangs out with her two daughters, Tiffany and Sanai. Tiffany, who is pregnant, asks if she’s gonna settle down and stop working so she can be a grandma. That’s a no from Yo-Yo. The youngest, who lives with her dad, chimes in to say she misses being home.

Yo-Yo defends her choice to work and build a career for her girls, reminding them that they weren’t without a home or food growing up. It’s all love though. The girls express their gratitude and love for their mom taking care of them in spite of having to work so much.

Apryl gets the boot, Princess gets her pup

Apryl pulls up to meet with Jason Lee. He tells her thereare issues with her not being consistent about showing up for her job as aco-host on “Hollywood Unlocked.” In his confessional, he says that she’sforgetting she’s an employee, not a partner.

After discussing her work absences and fan comments about her being on the show, he tells her they need to part ways. Apryl is not happy and gets defensive, telling Jason she doesn’t care about social media comments. He told her in this business, she should. In her sidebar, she refers to Jason as a coward.

Elsewhere, Princess brought a squad of friends and her dog Cocowith her to meet the person who says he has the dog. Cameras are rolling torecord the interaction at the police station. Outside, she spots what shethinks is the car from the dog-napping surveillance video. Did this guy take herdog only to trick her into giving him a reward?

Once inside, she’s reunited with Boogotti. The detectives want to investigate and she wants to wait to pay the $20,000 reward until they can confirm the guy is innocent. Ray still doesn’t know this is happening.

Lyrica is over it

At the Bentley house, A1 tells his mother, Pam, aboutLyrica’s Cookie Monster photo. His mom wants to know who took the pic, and Lyricaoverhears the conversation. An argument ensues, and at first, Pam says they’reboth wrong. She then goes in on Lyrica, saying men do bad things because of women,essentially blaming her for A1’s behavior.

The Summer Bunni thing comes up again, and then Pam and A1tag-team Lyrica about her photos, teasing her. Lyrica storms out. A1 says he’ssorry but she doesn’t think it’s sincere and starts packing her stuff.

Things get worse when Lyrica sees an Instagram live session between Zell and Summer Bunni; Bunni is talking trash about Lyrica and her man. She shows it to A1 and Pam, who try to calm her down. Of course it doesn’t work, and Lyrica angrily leaves the two of them at the house, suitcase in tow.