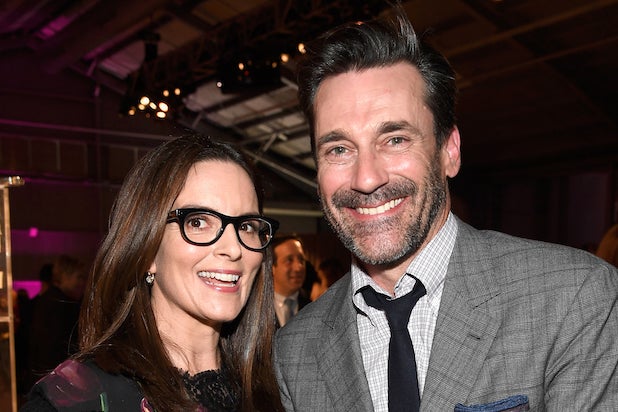 Jon Hamm and Tina Fey will reunite and star in the next feature from director John Slattery, a dark comedy called “Maggie Moore(s).”

Hamm and Fey have starred together on “30 Rock” and “Unbreakable Kimmy Schmidt,” and of course Hamm and Slattery are both veterans of “Mad Men.”

Slattery’s new film “Maggie Moore(s)”, which will be his follow-up to “God’s Pocket” from 2014, is a dark comedy about a police chief in a small town who is suddenly faced with back to back murders of two women with the exact same name. Paul Bernbaum (“Hollywoodland”) wrote the screenplay.

As an actor, John Slattery starred most recently on the series “Mrs. America” and “Next.” He also starred with Tina Fey in the anthology series “Modern Love.”

Jon Hamm lends his voice to the animated “Bless the Hearts” and was in “Wild Mountain Thyme” and will next be seen in “Top Gun Maverick” alongside Tom Cruise.

Tina Fey is returning to host the Golden Globes this Sunday along with Amy Poehler, and she just voice acted in Pixar’s “Soul” that premiered on Disney+ this Christmas.