Cob promised to make Suzie’s life a living hell, and in Season 2 of I Hate Suzie, he proves to be a man of his word.

At the tail end of Season 1, Suzie was floundering in the throes of an existential crisis as a result of her sex photo scandal. Her marriage was beyond destroyed, urging her to finally make the decision to leave it. And if things weren’t messy enough, she found out she was pregnant, too! Talk about drama. (Need a refresher? Read our finale recap here.)

When we first get reacquainted with Suzie (all three episodes of Season 2 are now available to stream on HBO Max), she’s performing on a celebrity dancing show called Dance Crazee. She’s dressed in full clown garb as she performs a wildly weird dance that has to be seen to be believed. However, her hopes of winning over the public and achieving some image rehab go up in flames when she becomes the first celebrity eliminated from the competition. In pure Suzie fashion, she’s overwhelmed, embarrassed and entirely a wreck.

After her new agent assures her it’s not as bad as it seems, we flash back six months to learn she’s living with her sister and has decided to terminate her pregnancy. Back in the present, Cob is ruthlessly making her pay for her indiscretions. He’s legally owed 50 percent of her income, and he wants the house and Frank home for Christmas, too. 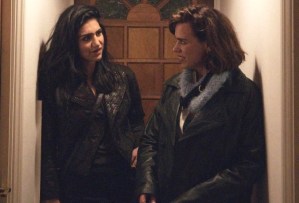 Suzie calls her former agent Naomi, and the estranged friends agree to break the ice. Neither of them are currently drinking, but after sharing a few laughs and some free drinks, the devilish duo is back in action. “Just one,” turns into shots and MDMA, which (you guessed it!) will definitely come back to haunt Suzie later.

The Dance Crazee producers wind up offering her a chance to return to the show, after one of the other contestants bows out. Despite wanting to crawl into a hole and die, she accepts the offer and returns to rehearsals. In the next live show, the contestants are paired up and Suzie narrowly avoids elimination after Bailey, her ex-husband, selects her as his partner. (Sorry Otis!)

After the show, Frank calls to speak to his mom only to be rudely interrupted by Cob, who ends the call. This lights a fire under Suzie, who, still angry about all of Cob’s demands, promises herself she’s going to WIN. At life? The show? Perhaps… both?

What did you think of Suzie‘s return? Grade the premiere below, then drop your thoughts in a comment.