Warning: This post contains spoilers from Sunday’s House of the Dragon.

When a grieving adult king is pressured into marrying his teenage daughter’s best friend, who has no say in the matter, that’s not exactly an event you commemorate with champagne toasts and tossed rice. So it’s understandable that no one — including King Viserys and his bethrothed, Alicent Hightower — is in a celebratory mood at the end of House of the Dragon‘s Episode 2. (Read a full recap here.)

The widowed monarch is “forced into a situation where he has to remarry. I don’t think he would have remarried, personally. I think his heart was broken when Aemma died,” Paddy Considine tells TVLine’s Dave Nemetz in the video above. “That’s the thing of being king, you know? No sooner is his wife dead when the council are talking about who’s going to be the heir. And then it’s about who are you going to marry?” 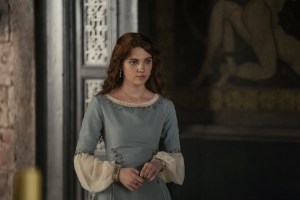 Though Olivia Cooke doesn’t appear in the episode in which the engagement is announced — she plays Alicent as an adult and will debut later in the season; Emily Carey plays Alicent as a girl — she can’t contain her horror when the subject comes up.

“She’s a child when that happens, and that is terrible parenting,” Cooke says, as co-star Emma D’Arcy nods in sympathy. “Her father is the Hand to the King, and he orchestrates that. And within Westeros, within that world, she’s looked upon as an incubator for children and subsequent, future heirs.”

But just because King Viserys acted in accordance with what his small council advised, don’t think he’s a pushover, Considine warns, teasing: “He makes moves that undermines everybody’s motivations, and that’s all revealed as the story goes on.”

Press PLAY on the video above to watch Cooke and Considine — as well as Matt Smith and D’Arcy — discuss the latest development in the Game of Thrones prequel, then hit the comments with your thoughts on Viserys and Alicent’s engagement.