Today’s This Morning was packed full of surprises from the get-go as Holly Willoughby and Phillip Schofield faced their fair share of shocks. Not only did Phil kick off the show with a furious rant about not being able to read today’s script but the pair were also left in fits of laughter when Josie Gibson suffered an unfortunate wardrobe malfunction. However, ITV viewers were given another surprise when Holly revealed daughter Belle was “doing the interviewing” when she posed a question from her daughter to Julian Clary.

The comedian and author joined Holly and Phil from his home in North London via video link to discuss his new children’s book.

Luckily for Julian, it turns out Holly’s daughter Belle is a huge fan as the This Morning host admitted she’d read it “six times.”

Holly then went onto joke her daughter was “interviewing” Julian as she was posing him questions the nine-year-old wanted answering.

Holly explained to Julian: “I said to Belle this morning that you were on,” 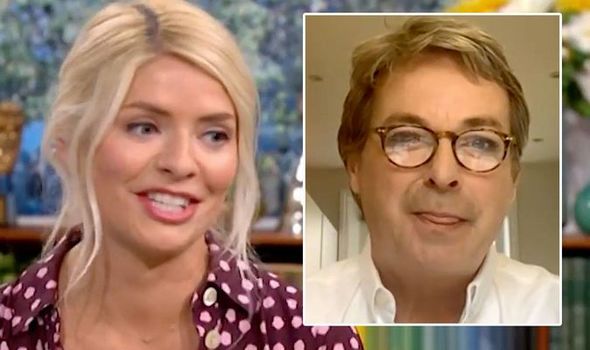 She continued: “And I said: ‘Oh, I’m going to be speaking to the author of the book and if you have any questions you want to ask,’

“And she said: ‘Oh my goodness, tell him I’ve read it six times and I absolutely love it!’

“She said why did you choose hyenas? She’s interviewing you now,” Holly concluded.

Julian was more than happy to answer Belle’s question as he reeled off the explanation.

Julian replied: “Because hyenas laugh all the time!

“I wanted the family to be funny and they’re kind of based on my family,

“Not that we were hairy or anything like that but we did spend our lives being silly as I recall when I grew up.”