This Morning‘s Rylan Clark-Neal was left presenting solo after his co-host Gok Wan fled the studio due to his fear of snakes.

Following an interview with a blind man that found a giant snake in his home, the presenters had to part ways as Gok couldn’t stand to be around the slithery guests that were being brought in. 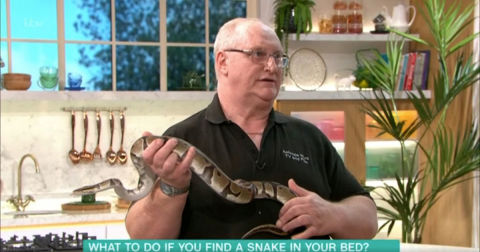 Rylan spoke to a snake expert, who explained that most rogue snakes he captures are pets that have escaped family homes.

After Rylan teased Gok about whether he was enjoying the segment backstage, the fashion expert shouted: “No, I’m not – I can’t listen to you talking about it. Hurry up with the snakes already!

“Oh my god, it’s the skinny quick ones,” he said, explaining which snakes he hates, before warning Rylan: “If you bring it out here!”

This Morning‘s newest presenting duo – who’ve been nicknamed ‘Rok’ – suffered a bit of a mishap yesterday, as Gok completely fumbled Rylan’s name at the start of the show.

Meanwhile, their debate on the concept of gender-neutral gingerbread figures divided viewers with some calling it “ridiculous”, while others felt that “something small could make a huge difference to feeling accepted”.

This Morning continues weekdays from 10.30am.