Good Morning Britain viewers tuned in to see Piers Morgan and Susanna Reid discuss the possible abolition of Swing Low, Sweet Chariot song from rugby matches. Joining them for the debate was Dr Shola Mos-Shogbamimu and Tom Slater, Deputy Editor of Spiked Online. However, when the conversation turned to whether the N word should be removed from society’s dialogue altogether, Dr Shola she said the racial slur – in full – twice and those watching at home were stunned. Morgan and Reid didn’t apologise either for anyone who may have been offended by the language used at that time of day. Express.co.uk has contacted GMB for comment.

Dr Shola, who is a highly-qualified Lawyer, Founder of Women in Leadership Publication and Political and Women’s rights activist joined GMB for another debate this morning.

The Black Lives Matter movement has prompted thought and discussion about institutionalised behaviours and racism that still exist in today’s society.

Recently, it has triggered a wide-reaching review at England Rugby over the use of their anthem Swing Low, Sweet Chariot

Dr Shola alongside Tom Slater took part in this civilised and calm discussion alongside the GMB presenters.

“There’s a staggering piece in the Washington Post a few years ago which said the N word is used on social media 500,000 times a day predominantly by young African-American men in America, embracing it and using it as a weapon for themselves in a way it was used against them,” Piers revealed.

“But it comes back to this thing, well people say ‘If black people are using it, why can’t I?’ Which is obviously a ridiculous argument -”

Dr Shola cut him off and added: “Correct! Such a false equivalent!”

“But wouldn’t it be better if rap stars did stop peppering all their songs with the N word?” Piers continued. 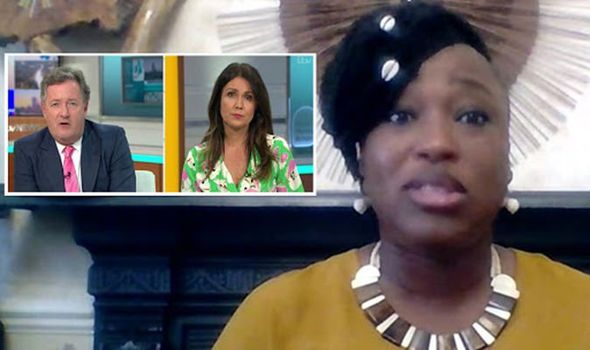 “But I understand to your point that rap stars and the black youths have almost taken that word and turned it on its head and used it in either as friends do to each other.”

Taking to Twitter to comment, one said: “@liameley9  Dr Shola dropping the N bomb twice on @GMB this morning @piersmorgan not picking up on it either  #gmb.”

“Racial slurs with your cornflakes, only on ITV #GMB,” someone else remarked.

Another tweet read: “The N word is offensive and noone should be using it! End of.”

“What did she just say? #GMB” Someone asked while another wrote: “#gmb I can’t believe Dr Shola has the arrogance now to use that word… twice …”

“@Ofcom @GMB I think you need to pick your guests more wisely. Dr Shola dropping the N word twice and no one flinches, believing that black people can still use it but as soon as a white person uses it, it is deemed racist and we need educating. The double standards are astounding #GMB,” someone suggested.