Stanley Nelson has been making documentaries about the African American experience for 30 years, with sobering historical overviews ranging from “The Murder of Emmett Till” to “Freedom Riders” and “The Black Panthers: Vanguard of the Revolution.” Still, the 68-year-old filmmaker and co-founder of Harlem-based Firelight Media has been reticent to jump into the protests that have followed the murder of George Floyd in Minneapolis, Minn. by white police officer Derek Chauvin.

However, when reached by phone over the weekend, Nelson was in a car with his adult children, leaving the calm of Cape Cod for New York City: The kids demanded to be a part of the rallies. “I’m driving my kids back to New York against my own wishes,” he said, “but they are insistent that they feel like they have to get out there, march, demonstrate.”

Nelson has closely followed coverage of the Floyd protests, and shared his thoughts with IndieWire on why he believes black filmmakers must be the ones to capture this story. He also discussed his frustrations with the media and the historical connections he has uncovered through his own work.

What has been most striking to you about the way these protests have unfolded over the last week?

I’ve made a number of historical films, and one of the things that stands out to me is that so many times movements start from protests like this. There’s a whole generation of younger people who are being politicized by this. As we speak, we’re driving back to New York City so my 21-year-old twins can be part of the marches in New York. This is something they insisted on doing. They’re looking at it as a very meaningful moment.

How do you think filmmakers should be responding to this?

It’s important for documentary filmmakers at this point to understand that we are the news. There’s not much that’s not news, or slanted. One of the things we believe strongly at our company, Firelight, is that people should tell their own stories. We really believe this is a time when filmmakers of color can have a chance to tell their stories. It’s incumbent on white filmmakers to help them do that, to move out of the way so that they can do that. Part of the hierarchy of race in our country is how many times white filmmakers have the access to power and money, the access to equipment. They could get out there and make a film about this that’s in some ways not entirely representative of where we are as a community. It’s really important that people tell their own stories.

What sort of progress do you think is being made by the anger we’re seeing here?

It’s important that this opens our eyes to not only what happened with George Floyd, or the virus, but also the other kinds of racism that we’re all part of. I think the woman in Central Park was enlightening to a lot of people. It’s that kind of casual racism, where she’s saying, “I’m going to call my police on you.” So many of us as African Americans have had that experience: “I’m going to call security!” We know what that means, what side they will be on. I think it’s important that we all take this moment as an enlightening one.

Most of America is processing all of this through their televisions. What do you think is misleading about the media narrative surrounding the protests?

I’ve been struck by how bad the reporting has been on so many levels. The news cameras are staying way back, behind police lines, they’re not talking to the rational demonstrators to find out why they’re out there. They’re talking about violence as when you destroy property. Violence is when you sit on a guy’s neck until he dies. It seems like what they have is the ability to be on 24 hours a day. I found so much reporting lacking what a documentary filmmaker would do. We worked with the people who made “Whose Streets?” after Ferguson, and they were up there in the protests, using closeups. I think it’s great that the news is there 24/7. I sat there for seven hours watching reporting and thought it could be a lot more nuanced and it could look a lot better. There seems to be this need for protecting that keeps the reporters from the frontlines.

There are some people who think that the outrage surrounding George Floyd’s death could work in Trump’s favor by shifting focus away from his handling of the coronavirus crisis. What do you make of that assessment?

Be that as it may, this is what’s happening. Who knows how it will affect things? One of the things that’s important and we don’t see in a lot of the reporting is that part of this is a reaction to Trump — the feeling that racism is on the rise, this kind of action is almost condoned and encouraged. It makes clear sense why this would happen. Part of the frustration is that we need, to me, a clearer connection between the death of George Floyd, the COVID crisis, and Trumpism — this feeling that it is a clear part of who we are as America right now. 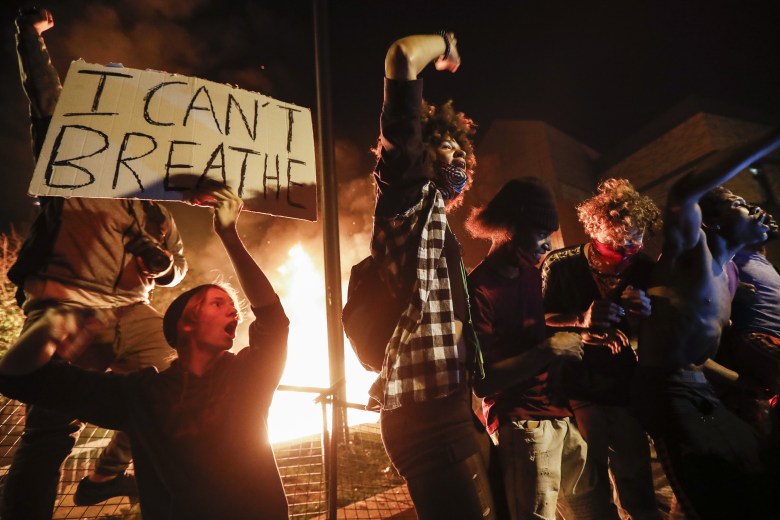 Protestors demonstrate outside of a burning Minneapolis 3rd Police Precinct, in Minneapolis.

How accurate are the comparisons being made between these protests and those of the Civil Rights era?

I think there are some things are close to it and some aren’t. I’ve always believed the Civil Rights movement needed Martin Luther King — but it also needed Malcolm X and the Black Panthers. That’s where we are today. It’s more of a Black Panther moment. Look, this wouldn’t have gotten the press coverage is people hadn’t started breaking and burning things. That is part of the press coverage. If there were peaceful demonstrations across the country, I don’t think it wouldn’t gotten the same kind of coverage. That’s just the reality. Obviously, there’s rage that many people have and one of the things that’s been surprising to me is the number of white people, Asian people, Latino people out there. It is not in any way just black people. In some cities, it looks like majority white people. I think young people are frustrated with the way this society is going and there’s no talk of equality or change from the federal government.

When you made your 2015 documentary “The Black Panthers: Vanguard of the Revolution,” Black Lives Matter was in a relatively nascent stage. How do you see the connection between those movements now?

So much about the protests comes out of the Black Panthers. That’s really one of their largest contributions. They set an example of the way to be. Whether they were always right or wrong is not the point. In many ways, they were an example of in-your-face push for change.

These days, everyone is a documentarian with the ability to record events on a phone. Has has that changed the state of documentary filmmaking?

It helps shine a lot on things to have citizen journalists. Look at the Black Panthers starting in 1966 because of police brutality. It wasn’t like there wasn’t any police brutality from then until 2010. We just didn’t have cameras. Now they’re everywhere. Imagine if that birder in Central Park didn’t have a camera. Imagine if there had been no camera on George Floyd. The cameras make all the difference. Our role as documentary filmmakers is to give it context, to give it some kind of history, to go a little bit deeper. The fact that citizens are using their cameras to record these incidents had made a huge change. If people hadn’t recorded the Floyd incident, people would have said he was resisting arrest.

Four years ago, you were honored by DOC NYC, and you said in your acceptance speech that filmmakers needed to start making movies about people who didn’t look like themselves. Do you see any progress on that front?

In some ways. Again, I think it’s more important that white filmmakers help facilitate and work with filmmakers who don’t look like them, understanding that part of the structural racism in this country is that you have access to the power. You can walk in and get the money to make a film about George Floyd. Would that be the same film that somebody of color made? No. People need to understand that.

Based on your experiences telling stories about the African American experience, how do you expect the next few weeks to go?

I don’t know, but I think one of the things that will happen from what I’ve seen in my filmmaking is this: When Emmett Till was murdered in the ‘50s, the kids who were his age — 14 or 15 or so — by ’61 or ’62, they became the Freedom Riders and other movements in the South. They were politicized as kids when they saw someone their age murdered. Now you have people in the streets who have also been politicized. I’m driving my kids back to New York against my own wishes, but they are insistent that they feel like they have to get out there, march, demonstrate. A whole generation of young people are politicized and they’ll be the next generation of the movement. Whether there’s a lull or not, the push for change will come back.