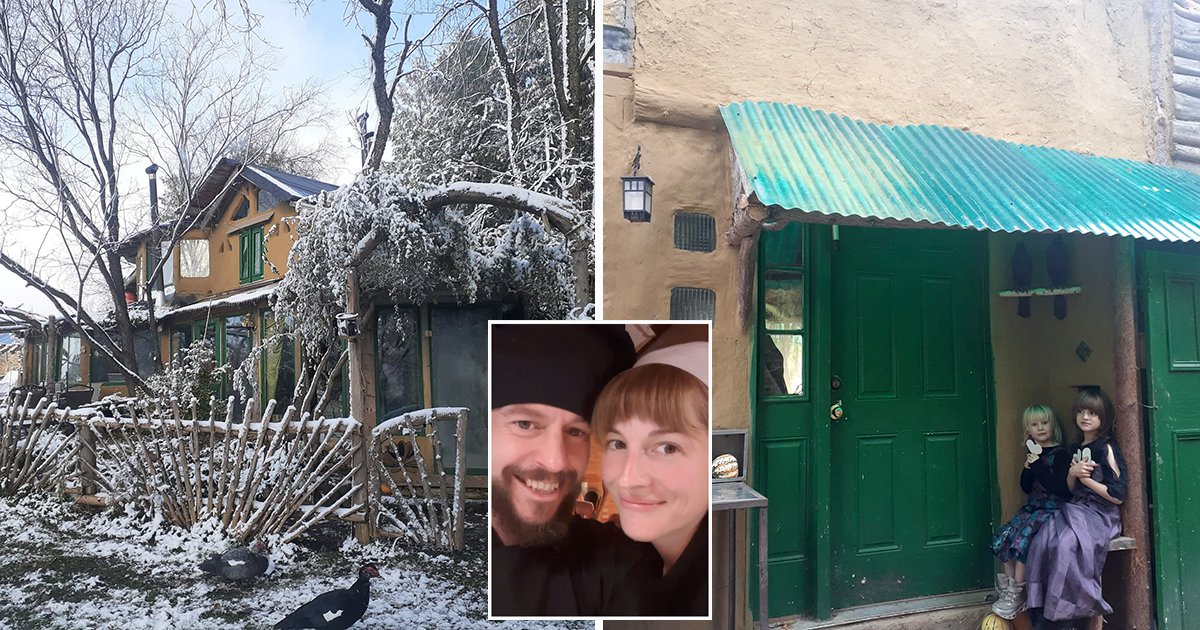 Misty Murph’Ariens, 36, and her husband Bryce, 46, knew the moment they met that they weren’t keen on the traditional path of renting, saving up for a house, and moving to the suburbs.

So they took an alternative approach: building their very own house in a remote Canadian forest.

That journey has given them joy, self-sustainability, and thousands in savings, as they haven’t paid bills in a decade.

The former chefs, who share their home with daughters Sage, seven, and Auroroa, five, are almost entirely self-sufficient, getting electricity from solar panels and using rain and a well for water.

Most food comes from their own cows, chickens, ducks, and a vegetable patch, harvested on a weekly basis.

Misty, from Dundalk, Ontario, said: ‘From the moment we met we instantly knew we wanted to live an alternative lifestyle.

‘Bryce’s grandmother’s cottage was so peaceful and we were constantly disappointed when we had to leave and go back to the city.

‘I’ve always suffered with intense migraines but when we moved to the countryside they started to become less and less frequent.

‘Six months after moving they’d stopped completely and I’m convinced it was the noise and the city environment which had been the cause of my discomfort.

‘Rural living immediately made sense to us, and the idea of being completely self sufficient was really appealing.’

After spending a few years learning tips and tricks from relatives who lived more rurally, the couple, who met while working as chefs in Hamilton, bought a plot of land for $37,500 and set to work on building a cob house – a natural material made of clay, sand, and straw.

They got the idea to build their own house after visiting Bryce’s grandmother’s own cob cottage in Durham for 54 weekends in a row, before eventually moving in there in 2006.

Building the cob home took a lot of work, starting with clearing rubbish from their bit of land.

After four months, the house was ready for move-in. Every summer since, it gets expanded and improved a little more.

The couple’s daughters are home-schooled by Misty, and taught a traditional syllabus with the addition of key primal skills, animal care and building techniques.

To earn money, Misty and Bryce run a small catering business in the local community, but with no car, they get around by cycling, walking or travelling on horseback.

Bryce acknowledges that this lifestyle isn’t suitable for everyone, but says that for their family, it’s been a dream come true.

‘We’ve worked out over the years that our annual living costs amount to approximately $15,000 – and that’s with raising two kids,’ he said.

‘We try to be as self sufficient as possible, farming and harvesting all the food we eat.

‘We do get the occasional shopping delivery to the nearest road, but that’s only for a very select range of essential items.

‘I think the difference with our lifestyle is not so much what we do, but why we do it.

‘Of course we do have to acquire money, but the focus of our day is finding the most sustainable and fulfilling way to live.

‘Granted its not a life for everyone, but it works for us, and, as a family, we’ve never been happier.’