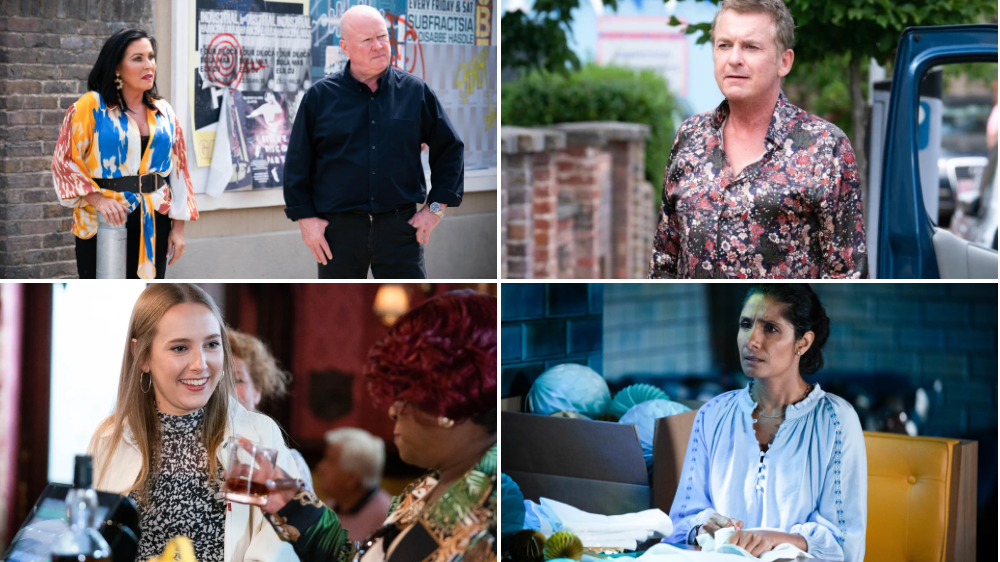 EastEnders is packing a lot of big shocks next week, with Mick Carter (Danny Dyer) taken aback as Janine Butcher (Charlie Brooks) reveals she is pregnant.

The baby bombshell is set to rock the Carter family but it isn’t the only thing Mick is contending with – emotions run high as Frankie Lewis (Rose Alying-Ellis) says her goodbyes.

Elsewhere, relations between Kat Slater (Jessie Wallace) and Alfie Moon (Shane Richie) may thaw – but Phil Mitchell (Steve McFadden) is having none of it.

Janine surprises Mick with a day trip, but it clashes with the day of Linda’s meeting with her brief. Realising she would benefit from Linda doing well in court, Janine suggests Mick goes, appearing slightly unwell. Later, Linda’s hopes are dashed.

When Sonia brings in a sick Scarlett, Janine is convinced that they have the same bug. However while tending to Scarlett Janine faints. In the hospital, Sonia and Janine are left shellshocked when the doctor reveals that Janine is pregnant.

Denzel spots Tommy and Nugget teasing  Amy as she walks through the market but his request for Nugget to leave her alone is ignored. Elsewhere, Dotty’s living situation remains uncertain.

Unaware Bobby has made a mess, Kathy blames Dotty which leads her to want to leave. Bernie reminds Dotty that her grandma owns Sonia’s house but after finding the courage to ask Sonia about living there, Sonia declines. Sonia pushes Rocky to fight for Dotty, and with Kathy’s blessing, Rocky persuades Dotty to stay.

Alfie’s business in Walford is unfinished, and he sets up a stall next to Billy’s as he tries to raffle off his boat.

As Alfie’s raffle starts to gain momentum, it is stopped by Honey who tells him to clear the unlicenced stall.

In The Vic, Frankie tells Shirley that the girl she is helping at school will be moving to Scotland, and that she has been invited to join the family there.

Reeling from her news, Sonia encourages Janine to tell Mick. At Sharon’s, Mick assures Linda that he still cares about her and will help her fight to get Annie back. Frankie finally tells Mick about her opportunity in Scotland, but is unimpressed with his unenthusiastic reaction. After some encouragement from Linda.

Amy is sceptical when Denzel apologises to her, while Nugget watches on intrigued. Later, he asks Denzel if he likes Amy, but Denzel denies it unconvincingly. Elsewhere at Kathy’s, the situation with Dotty remains strained. Things get worse Dotty implies in front of Kathy that Rocky is hiding something.

Dotty then overhears Rocky telling Kathy about a lady he was engaged to and walked out on and considers telling him the truth  but loses her nerve. Later, things get heated when Ash confronts Dotty about what she’s done to Vinny.

Rocky and Vinny break things up, but a riled-up Vinny loses his temper and tells Rocky that he is Dotty’s real father, leaving him stunned.

In the café, as Frankie tells Callum her fears about moving to Scotland, she watches Sonia urging Janine to tell Mick about the pregnancy.

Rocky tries to contact Dotty. It’s awkward at the Taylor’s as Felix and Finlay see Dotty has stayed the night, as Bernie encourages her to face Rocky.

Kheerat isn’t happy that Vinny and Ash are handing flyers out for Walford East’s reopening.

Eve, aware something is up with Suki, encourages Kheerat to attend the opening. Later, Eve overhears the ending of an argument between Ravi and Suki and encourages Suki to tell her what’s wrong.

Mick prepares for Linda’s hearing. Linda’s waits anxiously to be called into her court hearing as her new lawyer Anita offers her reassurance.

Linda opens up to Sharon about her feelings for Mick when she realises how much Mick paid for her new lawyer. Later, Shirley enjoys telling Janine that Mick paid for Linda’s lawyer, but when In The Vic, Linda is about to profess her love.

Tensions rise at Kathy’s as Dotty and Bobby clash, while Kathy is upset about the opening of Walford East as it was Ian’s dream.

Elsewhere, Harvey asks Jean out for a drink, but strictly as friends.

Eve and Stacey encourage Kheerat to attend the opening of Walford East, but he refuses. Suki is anxious about explaining Kheerat and Ranveer’s absence but as the launch party begins, she calms when Eve enters with Vinny, Ash, Stacey and Kheerat.

However, when a family friend asks Kheerat about Ranveer, Suki panics but Ravi swoops in. Kheerat scolds Stacey for drinking too much after she queries his obsession with Ranveer’s whereabouts. Ravi finds a tipsy Stacey in the kitchen, but their flirty interaction is cut short by an unimpressed Kheerat. Kheerat tells Suki that he has suspicions about Ravi and Ranveer but she brushes him off.