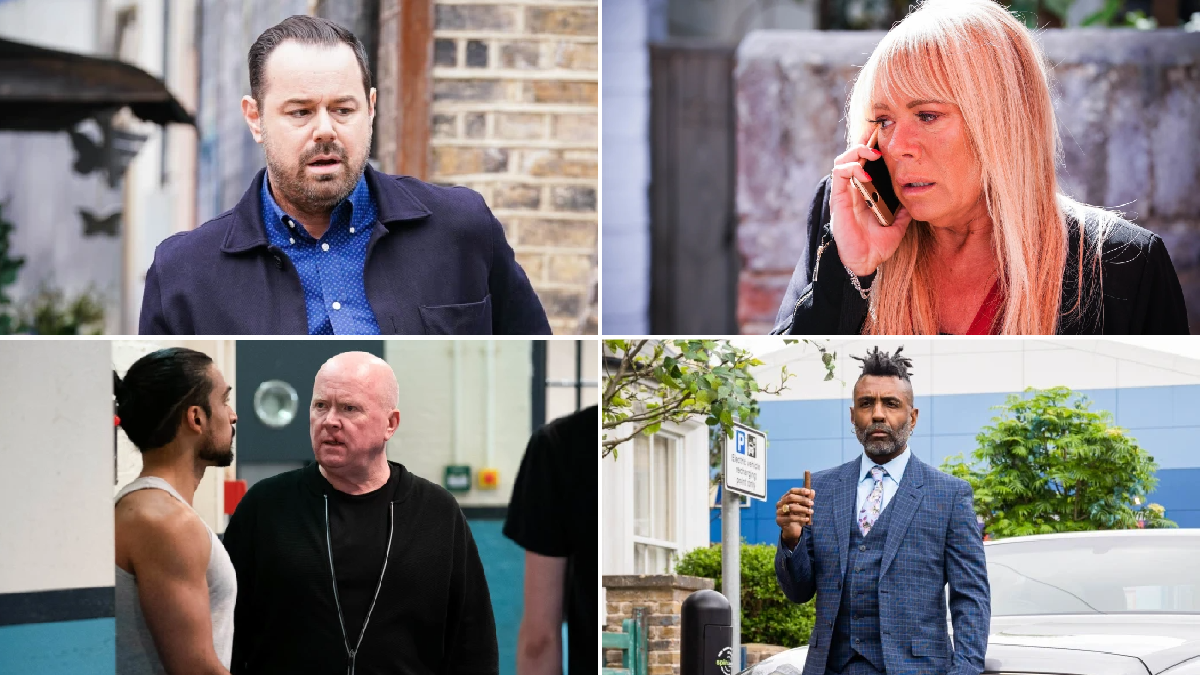 We have been in this position before – and while it seems that Phil Mitchell (Steve McFadden) is untouchable, EastEnders has dropped a huge hint that the hardman is going to die.

As he faces up to a murderous attack in prison, his refusal to become a grass could well be the death of him.

Meanwhile, there are some new faces in the Square as Mitch Baker (Roger Griffiths) is surprised to see his extended family show up.

There’s trouble brewing as Avery arrives in Albert Square in his flash car and immediately causes a stir with the market traders.  Realising he’s got off on the wrong foot with them, Avery plans a gathering in The Vic and invites everyone along.

Meanwhile, Mitch is less than interested in celebrating his birthday but Karen drags him over to The Vic for a drink. The pair get more than they bargained for though when they arrive to find Avery, Mitch’s estranged big brother.

Phil makes an enemy with another prisoner, Craig, and turns to a fellow inmate, Ravi, to get a burner phone. Ben is torn when Phil calls and asks him for a favour leading Ben to reveal all to a furious Kathy. As they talk, the phone line goes dead.

Back at the prison, Phil finds himself in a huge fight with Craig forcing the guards to step in. He later meets with Keeble who warns him he won’t survive much longer in prison and gives him 48 hours to make a decision on her offer.

It’s the day of Denny’s 16th birthday and Jada is confused when a package arrives for him. Sharon opens it and is touched by what she finds.

After talking to Eve, Stacey wonders if Kheerat is ashamed of her so tests him by kissing him in the café. Spotting Suki walk in, Kheerat backs away leaving Stacey devastated and believing he’s embarrassed  of her. Furious, Stacey ends their relationship.

Craig sends Phil a sinister warning – he dies tomorrow. Getting desperate, Phil turns to Ravi and offers to pay him to back him up. Kat is on on-edge after the abrupt end to Phil’s call yesterday and is harassed by a mystery caller.

Phil calls Kat for a favour.

Things get worse for Kat as another threat is sent via Tommy.

Things are tense at the Taylors’ as Avery impresses Mitch’s family but Mitch refuses to give his brother the time of day.

At The Vic, Mitch snaps at Avery, he wasn’t there for him when he needed him. Avery apologises and asks a reluctant Mitch to help him with a job.

Eve puts Kheerat in his place after his behaviour towards Stacey. Suki soon arrives with Nina and reveals she’s engaged to Ranveer.

Janine is annoyed when Mick offers Linda support ahead of her meeting with the social worker. Later on, Linda shares the news that Annie is staying with her but is upset when Sonia makes a dig.

The clock is ticking for Phil as Craig warns him his time is coming to an end. Keeble arrives to speak to Phil and crushes his hopes of any backup.

Reality hitting, Phil asks Sharon to visit and gives her five letters for her and his family. Sharon realises what’s going on and pleads with him to take Keeble’s deal.

Phil refuses and Sharon begs him to fight. At the prison, Craig and his men arrive for Phil… Is this the end of Phil Mitchell?

Karen encourages Mitch  to give Avery a chance with the job but Mitch is convinced he has an ulterior motive. Avery arrives with a van of white goods and assures Mitch it’s all legit, convincing him to do the job. Afterwards, Mitch realises Avery lied to him and it was a dodgy job so Mitch warns him to stay away from his family.

Later, Avery arrives to talk to Mitch but he collapses. It’s the opening night at Peggy’s.

Elsewhere, Sharon tells Linda she doesn’t have to prove herself to anyone but Linda is determined to start working at The Vic again. Mick eventually agrees but warns Linda he’s going to see Zsa Zsa with Shirley so it’s just Linda and Janine.

Sharon anxiously waits for news on what’s happened to Phil.

The Taylors await news on Avery as Mitch calls his two sons, Finlay and Felix who soon arrive.

The Taylors are shocked when Felix and Finlay share a revelation.

Kathy struggles to keep her family together as tensions boil between Peter and Ben. Peter quizzes Jay and when Jay realises he knows Ben attacked him, he encourages Ben to tell him the truth. Ben finds Peter and offers an olive branch but Peter is less than interested.

With Mick and Shirley going away, Linda enjoys bossing Janine around at The Vic.