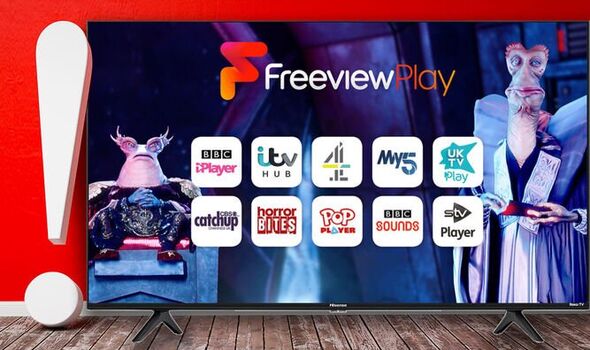 Millions of Freeview users will suddenly find they have fewer channels to watch from today. The hugely popular subscription-free TV service is being hit by the changes due to a broadcast signal – named COM7 Multiplex – being closed down to make way for the very latest 5G mobile technology from EE. With less bandwidth to use, Freeview has been forced to make some dramatic changes which include a number of TV channels being taken off air for good.

A total of 10 services will no longer be available from today including BBC News HD, FreeSports, Forces TV and QVC HD. The update has also meant some services are switching positions on the TV planner and others won’t be available in as many areas as before.

Speaking to Express.co.uk, a Freeview spokesman said: “Since the decision by Ofcom to make more airwaves available for mobile data, the Ofcom licence for some channels broadcasting on Freeview has expired. This means that affected channels are making changes to the way they are broadcast moving forward.”

And the BBC added: “As a consequence of the closure of COM7, BBC News on Freeview will be available only in SD from the end of June 2022. However, you can still watch it in HD on BBC iPlayer.”

Other changes from today also mean some channels will be available in less areas whilst others are getting increased coverage. For example, from today Now 80’s will only be available in Manchester whilst CBS Drama is rebranding to Reality Xtra and reducing the number of homes it broadcasts to.

Channels that are increasing their coverage across the UK include Together TV, BBC FOUR HD, CBeebies HD and Quest Red +1.

Due to the number of changes across its platform, Freeview is advising that all users retune their TVs and set-top boxes to make sure they have all the latest channels.

So why are these COM7 changes happening and who will be affected?

5G is the future of mobile devices as it offers much faster download speeds and a more reliable signal which means more people can connect to it at once.

Although that’s great news for mobile users, this all means that, from today, Freeview’s COM7 multiplex will close. As a result, there will be less broadcast capacity available and a number of channels carried on COM7 will have to either close or be reallocated to other multiplexes.