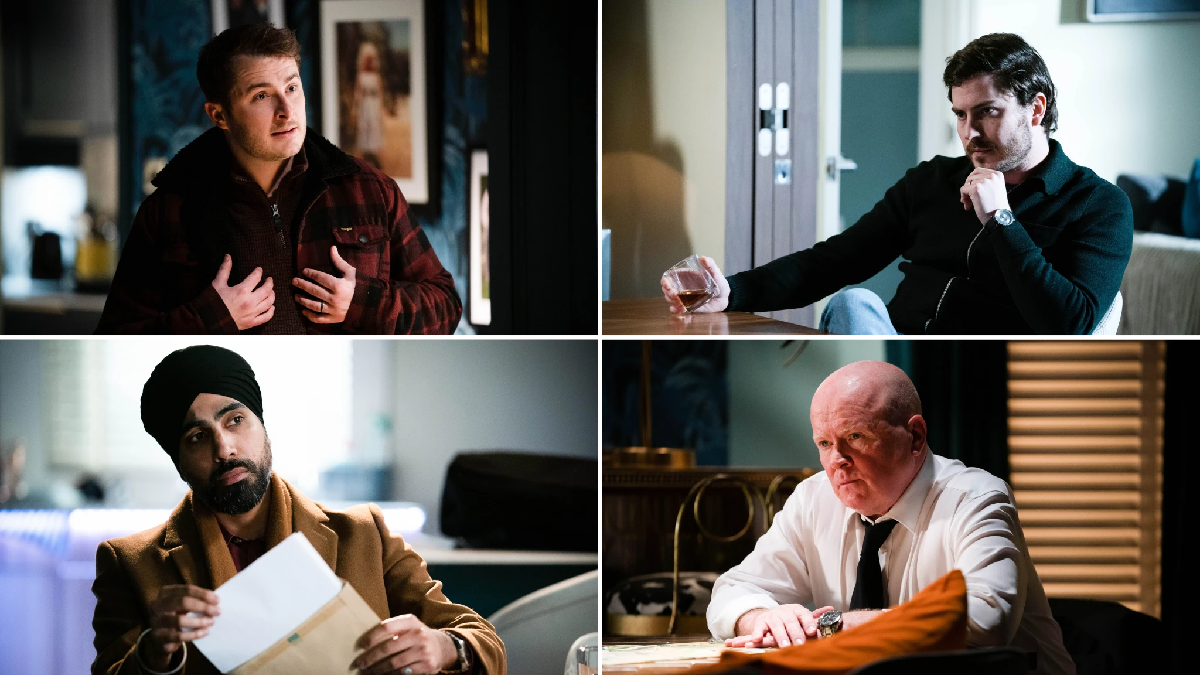 Gray Atkins (Toby-Alexander Smith) may think that he has got away with murder in EastEnders but Kheerat Panesar (Jaz Keol) is on his care and as the two men face off in a dramatic showdown, who is left for dead?

There is violence elsewhere in Albert Square as Phil Mitchell (Steve McFadden) teaches Tommy to stand up to bullies the only way he knows how – fighting.

But the situation is about to get a whole lot worse.

Worried Kheerat is getting in too deep with Gray, Whitney encourages him to stay away from him but after a desperate call from Gray, Kheerat ignores her advice and rushes to meet him, believing he can get Gray to admit the truth.

Meanwhile, Kheerat and Gray struggle to keep their anger in check and as accusations fly, the two come to blows leaving one life hanging in the balance.

Kat tells Phil it’s not fair to still be close with the kids when he’s going away so soon. Worried about the bullies, Tommy asks Phil if he can still pick him up from school, and Phil agrees. Sharon admits to Phil she can’t look after his businesses when he goes to prison, she has too much on her plate.

Later, Henry pays Kat a visit and when Phil appears, Kat openly flirts with him. Phil cuts in and orders him out. Kat is furious but they are interrupted when Kat receives a call from Tommy. Phil freezes – he forgot to pick him up. Later Phil returns home alone, panicked that he can’t find Tommy but soon a beaten up Tommy appears.

Kim decides to tell Pearl’s school she’s leaving because they can’t afford the fees. Kim meets with the school and is encouraged to have Pearl apply for a scholarship.

Later, Howie encourages Kim to create a video for the application. Elsewhere, after witnessing Whitney and Kheerat talking, Stacey is feeling down so Eve tries to help by building bridges with Suki but it doesn’t go  well.

As they hurl insults at each other, Honey steps in but Suki warns if she doesn’t do something about Stacey’s food van’s hygiene she will put in an official complaint. Later, Honey is shocked to see Eve and Stacey parked directly in front of the Minute Mart. Suki is furious and lashes out at Honey – she will get her fired.

Kat furiously tries to get information from Tommy about who attacked  him but he doesn’t want to say. Realising that Phil knew all about it, Kat’s anger grows. Forcing the truth out of Tommy, Kat is devastated to learn he is being bullied and outraged that Phil has been helping him behind her back.

Worried about how her kids will be affected when Phil goes to prison, Kat tells Phil it’s time to rip the bandage off – they’re moving out. Suki approaches Honey, desperate for her to move Stacey and Eve’s van from outside the Minute Mart. A hapless Honey tries to be fair but the women continue to try and outsmart each other.

Kim attempts to make the application video when Howie appears with professional equipment he borrowed from a friend. Patrick comments that he must have a crush on her and Kim initially brushes the thought off, but it stays with her so she asks him.

At the café, Whitney anxiously waits for Kheerat to call her, Stacey notices and asks if it’s Kheerat she’s waiting for, hiding her hurt when she is told it is.

Harvey calls the prison but still can’t get on the list to speak to Aaron, and Honey goes to her performance review for her market inspector role but Mr Lister is more interested in getting drinks.

Kat frantically packs to leave Phil’s house when Jean knocks over some paperwork and Kat is shocked at what she finds. Meanwhile, Sharon and Jada find a beaten up Tommy in the Square. Kat and Phil have it out but realising what she has to lose,  Kat gets on one knee to propose.

Tommy doesn’t want to go to school so Phil offers to take him for the day. Phil pushes Tommy hard at the gym but he buckles and runs off. Later, he shows off in front of Sid, telling them that Phil taught him to box. Ben overhears and warns him but Tommy doesn’t want to hear it.

As Phil gets ready, Ben has a go at him for telling Tommy to man up. As Tommy and Lily, the bullies appear and Tommy legs it. Lily calls for Phil and Tommy runs into the Argee Bargee and hides.

At the Minute Mart, Vinny gets robbed by some youths as Dotty and Stacey watch on. Vinny vents to Dotty about Suki.

Mr Lister is making Honey feel uncomfortable at the meeting. Honey vents to Jay about Mr Lister but after a pep talk, Honey is feeling inspired to use the situation to her advantage.