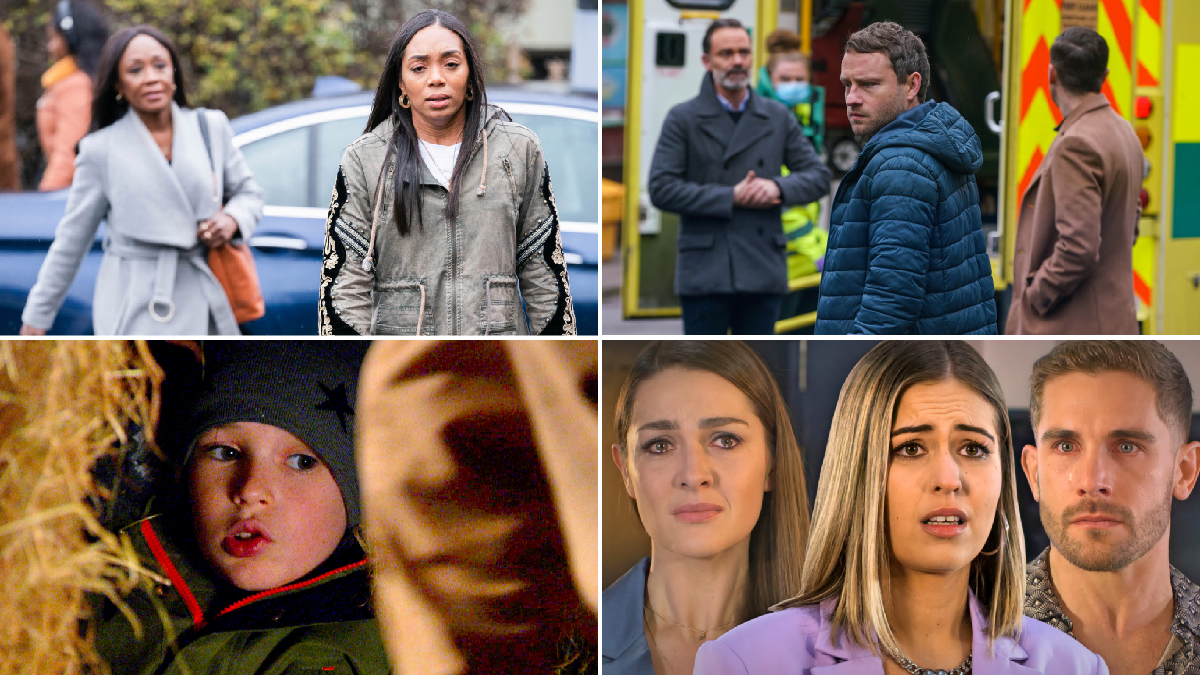 If you thought this week was an eventful one for the land of soap, then just wait until you see what’s in store next week!

Denise Fox (Diane Parish) has something of a showdown with killer Lucas Johnson (Don Gilet) in EastEnders, but she soon disappears — as does Lucas — giving Chelsea (Zaraah Abrahams) cause for concern.

Meanwhile, Summer Spellman (Harriet Bibby) is left fighting for her life in Coronation Street after a horrific car accident!

It’s a tense week in Emmerdale, as Kyle Winchester faces deadly danger due to Jamie Tate’s (Alexander Lincoln) actions, and therefore Moira Dingle (Natalie J Robb) seeks revenge, as she arrives at Home Farm — with a gun in hand!

And last but oh so not least, Summer Ranger (Rhiannon Clements) feels pressure from both Warren Fox (Jamie Lomas) and Grace Black (Tamara Wall) to expose Sienna Blake’s (Anna Passey) affair in Hollyoaks, but will she do so?

It all sounds very exciting, right?

Well if you simply cannot wait to see what’s ahead, we’re giving you a little taster of what’s to come.

1. Todd is up to his old tricks once more, as he calls Will, and gives him his next mission: force his way into Billy and Paul’s flat. Will does as he was asked. However, Summer walks in on the young lad, and she’s horrified to find him smashing up their things. She exits the flat, but she ultimately finds herself in the path of an oncoming van!

2. Craig pops by to investigate the burglary, and Paul reluctantly admits that the culprit was Will. Billy is fuming over such a thing, and berates Paul for bringing Will into their lives and endangering Summer’s life. Billy ultimately asserts that he has to put Summer first.

3. Nina applauds Asha, as she refuses to give Corey another chance. The chemistry between the two girls is apparent, and Asha asks Nina to meet her in Victoria Gardens, and Nina responds by telling her it’s a date!

4. Asha gets all dressed up, but when Dev sees her, he assumes she’s got a date with a boy. Therefore, the young girl informs him that her date is actually with Nina — leaving Dev in shock. Dev tells Roy about Asha’s relationship with Nina, and Roy informs him that he should be flattered Asha felt able to share something so personal with him.

5. Johnny discovers from the neurologist that his condition has worsened, and therefore his MS medication is being increased.

6. Tyrone confides in Dev that he regrets asking Alina to move in, as he’s struggling to relax with a stranger in the house, and he is later left flustered when Alina emerges from the bathroom in nothing but a skimpy towel! Tyrone tells Alina that he’s arranged with Debbie for her to move back into the salon flat.

7. Gail receives a call from London. Her face drops when she learns devastating news, and she later confides in Nick that she’s taken a call from Ted’s partner Andrew, who confirmed that Ted is dead. She is determined to assist with funeral arrangements, and therefore she decides to go down to London.

8. Lucas successfully persuades Chelsea to attend church with him, but things take a turn when he’s interrupted by her phone ringing. Chelsea’s plan ultimately crumbles, and Lucas refuses to go away.

9. Horrified to discover that Chelsea’s mysterious trip involves Lucas, Denise accuses him of manipulating their daughter. However, Lucas is shocked as he comes to realise that Denise has no idea that this is Chelsea’s idea.

10. As Chelsea waits with the taxi, Lucas refuses to leave. Denise assumes he’s once again let their daughter down and confronts him. Denise rants at him, launching into a tirade of her hurt and pent-up anger. Lucas finally snaps.

11. Vinny later tells interrupts Jack and Chelsea to reveal that he thinks something has happened at the flat, as he’s seen blood. Devastated, they rush over to see for themselves, and they find the place in a complete state — and Denise and Lucas are nowhere to be found.

12. Jay buys the kids new trainers, and Billy is hurt as a result. He is determined to get a new job and is pleased when he’s given a trial shift at the call centre. Things don’t go according to plan, and therefore Billy asks Vinny about dealing drugs. Vinny agrees to help, and ultimately gives Billy a drugs package.

13. Desperate to know more about Tina’s vanishing, Mick persuades Linda to get the truth from Max. Linda seemingly does just that, and her interests are piqued by what Max has to say. Afterwards, Mick is incredibly concerned for Tina, and tells Linda that nothing is making sense.

14. Max is on a mission to get to the truth, and Sharon panics when she learns from Linda that Max is getting closer to working out who it was that attacked Ian. Sharon argues he only wants to do so in order to win Linda back, but ultimately he makes a shock announcement: it was Sharon begins Ian’s attack and Tina is innocent!

15. Mack forms a plan to get revenge on Jamie, and ultimately sets a trap which the young man walks right into. Jamie and Kim soon realise that they’ve been tricked, and Kim wastes little time berating her son for allowing them to end up in such a position in the first place.

16. Jamie becomes hellbent on revenge, and douses the farm in petrol — but little does he know that little Kyle is playing hide and seek in the barn. Will Mack find out what’s going on in time to rescue Kyle?

17. Moira is out for revenge also, as she enters Home Farm with a gun, and Real Greg hightails it out of there as she turns the gun and pulls the trigger! Has Moira shot someone?

18. Laurel desperately fights her demons, but she’s tempted by the bottle of vodka in her cupboard. An alert from a pregnancy app delivers a cruel blow, and therefore she succumbing to temptation — knocking back a glass. Nicola catches her red-handed, and Laurel opens up about the termination.

19. Gabby flirts with Jamie… and let’s just say that it later seems to pay off. She is later left upset, however, but Kim likes her spirit.

20. Mandy agrees to make an effort with Paul — for Vinny’s sake. Later, Paul discovers that Liv owns her own house, and it’s safe to say his interest is piqued by such a thing. He’s later left alarmed when Connor shows up once more, and issues him with a devastating demand.

21. John Paul is left shaken when he discovers that Dean has returned once again. Dean clarifies that he wants George back, and thus John Paul drowns his sorrows with Courtney Donovan. Having come to believe that George is with Dean, John Paul leaves a drunken jealous voicemail on the policeman’s phone — one in which he claims to be with James!

22. George wastes little time in playing it back for John Paul, and it’s safe to say John Paul is mortified by his own actions. Meanwhile, Dean refuses to leave until he speaks to George. George tells him he’s with John Paul now. George sees John Paul talking to James, and plays the victim — delivering quite the performance. When he later runs into Dean once again, he knows exactly what to do in order to get back at John Paul.

23. Toby is held prisoner at The Loft by the villainous Dr Ley, who intends on dredging up Toby’s past in an effort to make him snap. Cleo investigates when she becomes worries about Toby’s disappearance, and after spotting Dr Ley outside The Loft, she enters to find a child-like Toby trapped in a makeshift prison.

24. Seth asks Theresa to come with him. Theresa wants to know where he’s keeping the blackmail money. Seth ultimately gives her one of two keys to a safety deposit box. However, a hand-bag mix up results in the key ending up in Goldie’s possession, and a desperate Seth shows his true colours, as he does whatever it takes to fix Theresa’s mess.

25. Both Warren and Grace Black push Summer to carry out her plan and expose the truth about Sienna and Brody’s affair. Summer successfully comes between Sienna and Brody later in the week.