Adam Frost was on hand to help Gardeners’ World viewers design a tricky part of their garden in a previous episode of the BBC Two show. The British landscape gardener was explaining the difficulty he had trying to add colour and interest to a border that gets sunlight all day. Those watching at home were advised on what the best plants were for the area and he gave a warning when it came to Iris’.

“This was a little problem area that I was talking about, and we’ve already put this rose against this old wall as a climber,” Adam began.

“But this gets very hot here, you can see by some of the flowers there, they’ve been scorned.

“On top of that, I can’t make the border any wider, I think a lot of us deal with this, we’ve got a fence that runs down the side o the garden, we can’t out borders any wider, the small spaces are needed so much more.

“How do we deal with that vertical in the background, and don’t be averse to getting as high up the wall as you can,” he added. 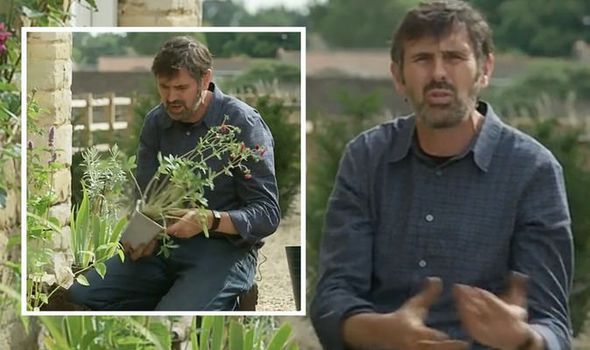 “But also, it’s thinking about the colour of that background – and I’ve already added the Agastache, it’s Liquorice Blue, a good vertical plant but it will bring the scent and the flower looks good against that background.

“And then I’m looking to add plants to break the edge of this strong line, so here I’ve gone for Euphorbia polychroma which will give me good early colour,” the presenter revealed.

“I’ve just started to repeat things, and get this sense of rhythm down through the border and you can do that in your own garden as well.

“I’m just adding these last few [plants] and this is Potentilla thurberi ‘Monarch’s Velvet’, there’s a slightly textured leaf to it, I use it quite a bit in the garden, and I think performance wise it just keeps flowering.

“And something that loves baking is this Iris and this is ‘Action Front’, so the flower will come up just shy of a metre but there showstoppers, there things that will stop you in your tracks even if it’s only for a few weeks,” he told Gardeners’ World viewers. 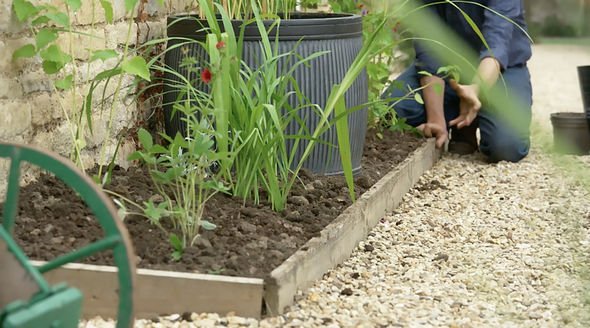 “Never plant them too deep, clean some of the compost off and expose [the roots]. And I’m going to make sure I face that towards the sun.

“But even when they’re not flowering, again, I’ve got that very upright form.”

Adam continued: “And the last one I’m putting in is the Artemisia and not really for it’s flower, because it’s not very showy, but great foliage, the foliage will be there all season.

“It will bake quite happily and it will grow to probably 50-60cm, it will slowly clump up and spread and cover the ground. 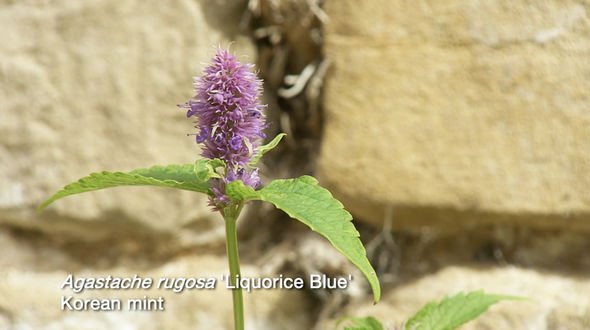 “If does get a little bit untidy, you can cut it hardback to the ground and it’s fine. In fact actually, there’s a few little shoots coming here at the bottom, so I’m going to tidy that up, couple of weeks time that will fill the space.

“In a sense, it’s just thinking about how we get good vertical structure, colours that are going to show well against the colour of your fence or wall and then you’re thinking about the interest through the season,” he said.

“All I’ve got to do now is give that a really good watering in and looking at it, it’s going to be really easy to maintain!”

It comes after Adam spoke about how “incredibly lucky” he was to get a job with Geoff Hamilton at the age of 21.

“Working for him had a huge influence on me and cemented my passion for plants,” he explained.

“When I first appeared on Gardeners’ World, I received a text from Geoff’s widow, Linda, saying how proud of me he’d have been. I sat watching the programme with tears rolling down my cheeks.”

As for what gardening means to him, it “isn’t about getting the perfect end result”.

“It’s about the journey and those little moments you have along the way,” Adam continued to House Beautiful in 2019.

“It could be the sound of birdsong or a flower popping up somewhere unexpected.

“I find being outdoors both relaxing and invigorating at the same time.

“Some of the happiest times are when the whole family’s together in the garden, we’re cooking with the pizza oven and the sun’s shining. Life doesn’t get much better than that,” he remarked.

Gardeners’ World airs Friday nights at 9pm on BBC Two and is available to catch up on the BBC iPlayer now.