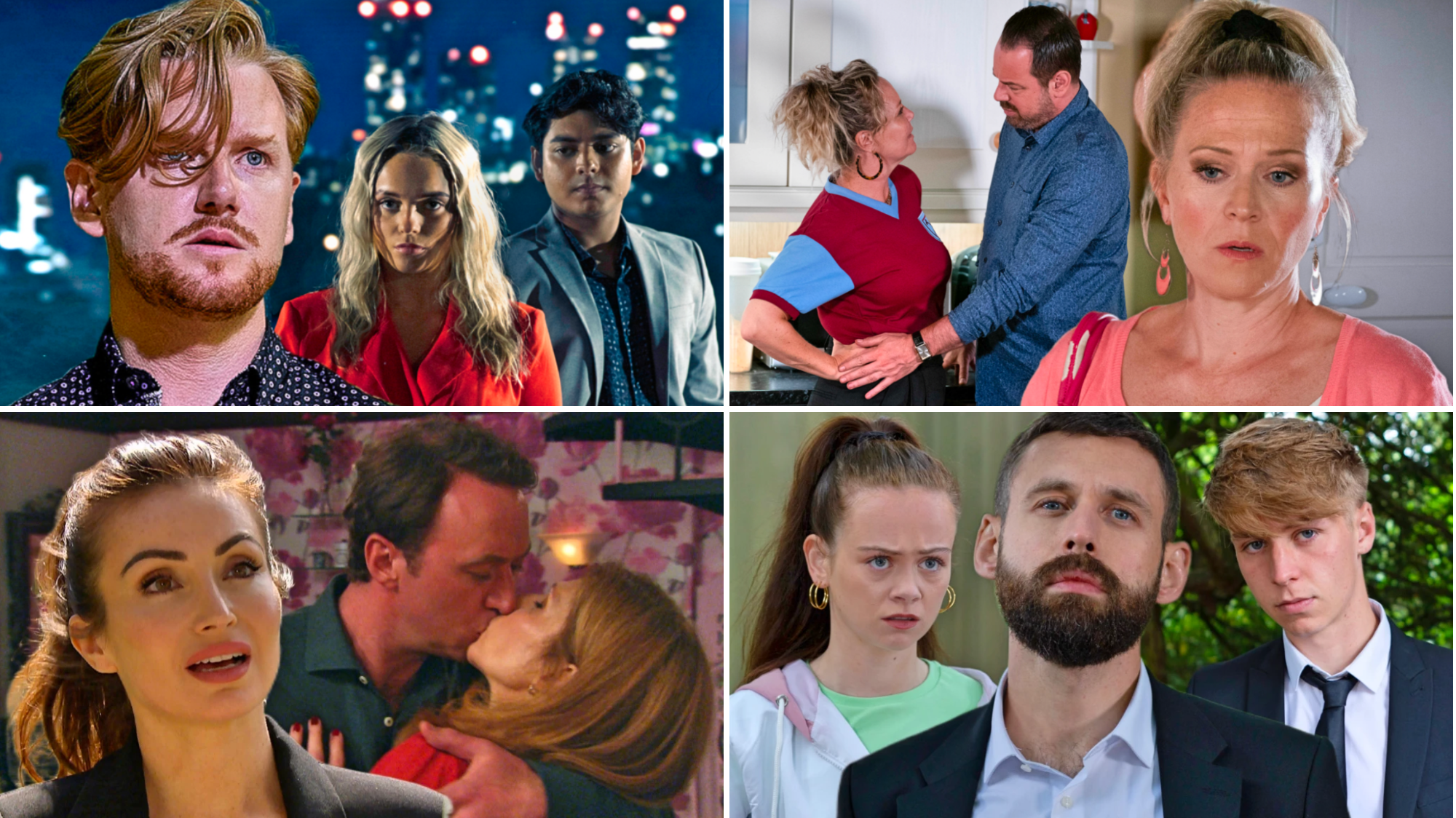 There is peril aplenty in the land of soap next week, with life-threatening situations on the cards for quite a number of the genre’s finest.

Coronation Street sees Gary Windass’ life on the line, after Kelly Neelan sets out to have him murdered in the very spot where her dad was killed by him three years ago.

But there is more drama to come for Kelly, as she ends up on the roof of a building as a gunshot it fired, leaving a series of Corrie faves in mortal danger.

Hollyoaks gent Sid Sumner, meanwhile, is caught up in a horrifying situation as his former drugs boss Victor Brothers reveals his true colours during a trip out for his mum’s funeral.

Over in EastEnders, Janine Butcher is pregnant with Mick Carter’s baby! But just how will Mick – or Linda, for that matter – take the news?

And in Emmerdale, Liam Cavanagh locks lips with old flame Bernice Blackstock, who he opens up to about his struggles with Leyla.

Did not see that coming.

It’s set to be another unmissable week in soapland, and Metro.co.uk is once again on hand to bring you all the latest goss.

Kelly is called to the police station to identify her kidnapper, and when she’s shown Kieron, she pretends that she doesn’t recognise him. Afterwards, however, she approaches Kieron, offering him £10,000 to kill Gary!

Kelly and Aadi’s engagement do takes place, and Gary offers some heartfelt words about how he and Maria have loved Kelly being a part of their lives. Kelly, however, tells him that she knows he murdered her dad, before running out! Gary storms after her but he’s knocked unconscious by Kieron and thrown into a van! Kieron and his sidekick take Gary to the exact spot where he murdered Rick and proceed to point a gun at him, ordering him to dig his own grave.

Gary subsequently alerts Aadi that Kelly is in grave danger. Kieron, meanwhile, leads Kelly onto the roof of a disused mill, revealing that he intends to kill her and frame her for Gary’s murder in the process. Gary and Aadi find Kelly on the roof, and the former orders Kieron to kill him instead. A shot rings out, but who has been hit?

David reckons the sinkhole is opening up again, so the Platts plan to move out while Leo conducts a full survey. Audrey suggests they can all stay with her, and Leo clocks Stephen’s unease at the suggestion. Leo confides in Jenny that he finds Stephen rather odd – as if he’s hiding something.

Janine surprises Mick with a day trip, but it clashes with the day of Linda’s meeting with her brief. Realising she would benefit from Linda doing well in court, Janine suggests Mick goes to support Linda, but Linda’s hopes are dashed.

Janine reckons she and Scarlett have the same bug as she faints! The doctor, however, reveals that she is pregnant! Linda, meanwhile, opens up to Sharon about her feelings for Mick when she realises how much Mick paid for her new lawyer. Afterwards, she prepares to profess her love for Mick – but will she manage to do so?

Things get heated as Ash confronts Dotty about what she did to Vinny. Rocky and Vinny break things up, but a riled-up Vinny loses his temper and tells Rocky that he is Dotty’s real father, leaving him stunned!

Frankie tells Shirley that the girl she is helping at school will be moving to Scotland, and that she has been invited to join the family there. But just how will Mick take the news?

Leyla is worried about her marriage and opens up to Priya. Liam, meanwhile, unloads on Bernice and old feelings resurface as he leans in for a kiss! Bernice insists he tell Leyla about what has happened, but he refrains from doing so. Bernice, however, assumes Leyla knows and accidentally puts her foot in it, revealing everything! How will Leyla react?

Amelia is livid when she discovers that Dan forced Noah to finish with her, and thus she moves out. Noah, meanwhile, promises to be there for Amelia through thick and thin – and the couple share their first kiss. Dan, however, sees their public display of affection and lashes out, but soon regrets his actions as he realises he’s only pushed his daughter further away.

Faith and Eric have a drunken afternoon and zoom back into the village in a stolen golf cart. Having the time of her life, Faith is glad to be enjoying Pollard’s company while she still can.

Victor asks Sid to accompany him to his mum’s funeral as a way to show all the others in attendance that he’s turned over a new leaf. He believes that Victor has repented for his sins, and agrees to do as he asks, much to Juliet’s horror. Victor’s true colours are revealed after the funeral, as his escape plan is set in motion, and poor Sid is taken captive!

Juliet walks straight into danger, and the teens find themselves as Victor’s mercy once more. Victor relishes in being back in control, and he’s keen for history to repeat itself as he forces Sid back into the world of drug-dealing, reassuring him that if he fails his mission, Juliet will die!

Nadira struggles to show Juliet affection in public. Donna-Marie, meanwhile, sets herself a mission to reunite Juliet with Peri by locking them in the gym changing rooms together!

Mercedes decides to go on the run with Bobby with Silas’ threats continuing to scare the family, but things are set to take an alarming turn.