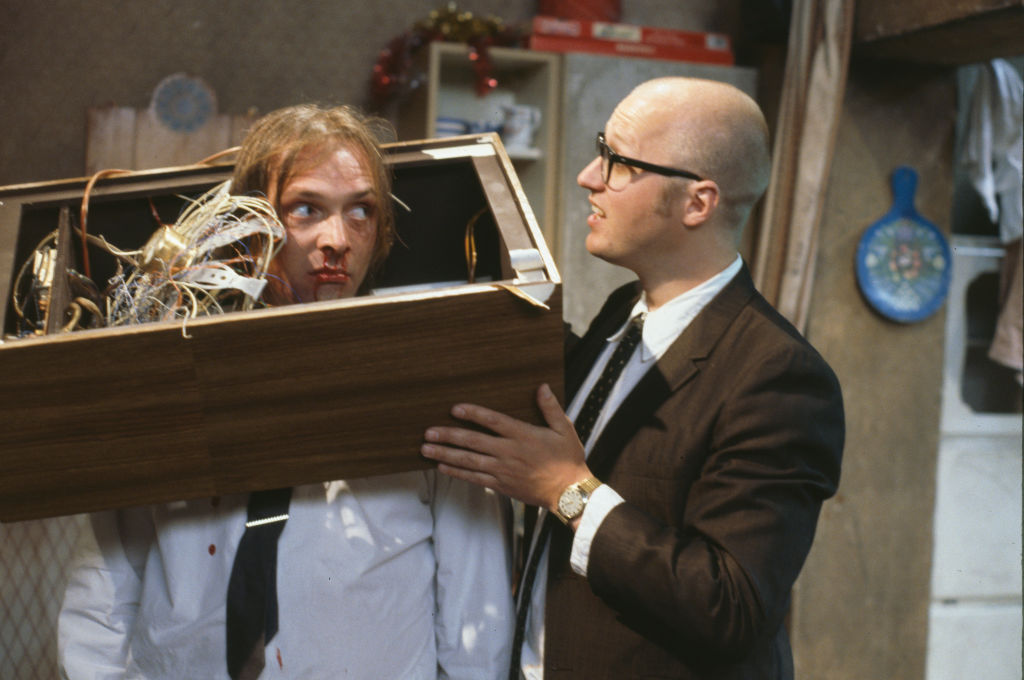 Known for its puerile jokes and viciously hilarious slapstick, Rik Mayall and Adrian Edmondson’s cult sitcom Bottom was uproariously funny. Littered with double entendres and fight scenes that made you shriek with laughter or wince; either way, your eyes watered.

And today marks 30 long years since it first exploded onto BBC Two on 17th September 1991 and it’s still shown today on some channels (bloody repeats) which is testament to its longevity.

It’s safe to say Bottom left quite an impression on me. I was eight when my older brother and I first watched it (sneakily, behind our parents’ backs – as all the best telly should be) and delighted in seeing Rik and Ade’s fiendish schemes descend into mayhem. Theirs was a grotesque universe born of outlandish imagination and I, like many fans across the globe, was hooked.

Despite decades elapsing since the height of its fame – between 1991 to 2003 Bottom ran for three series, generated five live tours and a feature film – I’m always surprised when people say they have never seen, nor even heard of, Bottom (cue meme of Richie’s horrified face).

For any deprived reader who hasn’t been depraved by Bottom, the sitcom revolves around an outrageously obscene, pathetic and cartoonish pair of losers named Richard Richard (Mayall) and Edward Hitler (Edmondson).

After changing the face of British comedy with the anarchic 80s student sitcom, The Young Ones and The Comic Strip, legends Rik and Ade created two utterly deplorable men in their thirties – trapped together at the ‘bottom’ of life’s skid-mark stained heap. Bottom’s title itself is of course innuendo, and the show’s toilet humour appeals to the child inside us all.

When I was at primary school, I had perfectly innocently (knowingly naughtily) written down the words to Richie’s rendition of a song entitled ‘Do Your Balls Hang Low’ to give to my friend. Her mum banned her from speaking to me ever again. Cancelled aged nine. (I hope Rik would have been proud!)

Not one to be silenced on a subject dear to my heart for long, I now co-present a podcast dedicated to Bottom and am co-writing the first ever unofficial guide book to what should be everyone’s favourite sitcom. The project got crowdfunded within a week – proving that fans’ appetite, not just my personal adoration, for Bottom continues three decades on.

What’s so great about it, you ask? In sitcom-land, Richie and Eddie are the ultimate ‘odd couple’ with a love-hate-hate-hate relationship. They share a will to survive despite the pointlessness of their existence. The programme’s ‘message’? Laugh. It’s all we humans have left. And the telly.

Without context, Richie and Eddie’s escapades may well induce revulsion – they repeatedly prove themselves to be the lowest of the low with their dastardly antics. They beat an unsuspecting gas man to within an inch of his life, they plot to poison a burglar who breaks into their flat so they can swipe his swag, and attempt to blackmail the then prime minister with a sex tape they unwittingly loot from a BBC camera during the annual Hammersmith carnival (riot).

And fans loved it. Even before Rik Mayall’s unbearably sad, untimely death in 2014, and the outpouring of collective grief that rightfully followed – I was among the devastated crowd of fans who attended the unveiling of a special memorial bench in his honour – there were online communities dedicated to honouring Rik and Ade’s comedy genius in Bottom.

Crucially, Richie and Eddie are played for exaggerated laughs – not the ‘hyper-real’ style made popular in the years since in equally brilliant sitcoms such as The Office or I’m Alan Partridge – the reason Richie and Eddie work is precisely because they are not grounded in, or restrained by, reality. It makes them endlessly entertaining.

Essentially trapped in adolescence, sad lonely virgin Richie desperately wants to ‘have it off’ but neither have any luck with women because they are openly perverted, wantonly sexist and, in Eddie’s case, often blind drunk. Some may feel appalled by the mere description but all the more reason, I say, to put on an episode and laugh in spite of yourself.

Your moral compass is a necessity – audiences are supposed to be shocked into releasing huge belly laughs and, to me, Rik and Ade are the undisputed champions of inducing hysterics. Comedy has to offend some of our sensibilities or it wouldn’t make us laugh.

As I’m a bird, sorry, woman, some people raise a quizzical eyebrow when I say I like Bottom (oo-er). It’s such a ‘masculine’ show, they argue. But I think the notion that I wouldn’t like it because of this is inherently sexist. Why shouldn’t girls enjoy great comedy? I’m sure Rik and Ade wrote it to make as many viewers as possible laugh, not just blokes.

In recent times, I’ve encountered men and – disappointingly, even women – who dismiss stellar sitcoms like Fleabag or Motherland as ‘female comedy’. To my mind, there’s no such thing as male or female humour. Just comedy. Jokes are told from a male or female perspective, sure, but they’re for everyone to take or leave.

That’s what I love about comedy – it’s subjective but, at its best, it shouldn’t discriminate. It unites us in recognition of how silly we all are. For me, Bottom does just that.

I’ve heard it said that Bottom ‘couldn’t be made today’. I disagree – if only the late, great Rik Mayall were still alive. The frenetic energy Rik poured into every performance made the show possible. His witty, warm and wild-eyed delivery sold Richie’s pitiful perversion, while Ade Edmondson provided an equally essential untraditional ‘straight man’ ready to give Richie a well-timed, well-deserved whack when tensions ran high.

Slapstick violence has, admittedly, gone out of fashion – not least because it’s extremely difficult to execute well – and Rik and Ade were masters of the art. The physically demanding and visually spectacular scenes in Bottom help make it timeless. It may be set in the 90s but Richie and Eddie could exist anytime, anywhere.

Of course, stereotypes and tastes have changed over the years so whether Bottom would be commissioned now is another question. Modern sensibilities would not suit Richie or Eddie. Eddie seeking therapy for his alcohol addiction or Richie joining Tinder – or, Heaven forbid, being an ‘incel’ (involuntary celibate) – would be unwatchable. Whatever vile behaviour they’d be getting up to, though, they would be shunned by society because that’s their fate for being complete gits.

Still, it’s all academic now. There will, sadly, never be more arsing around from the irreplaceable pairing of Rik and Ade.

I feel privileged to have grown up with the unadulterated gift to British comedy that is Bottom.

With new fans discovering it on streaming platforms, I hope generations to come will have their sense of humour influenced by the show. As far as I’m concerned, there’s no better way to shape one’s funny bone than by seeing the sharp ‘thwack’ of a frying pan collide with Rik Mayall’s head.

You can listen to the ‘Talking Bottom’ podcast or pledge to buy the book Talking Bottom: ‘A guide to the cult sitcom’ by pre-ordering a copy here).