Dan Walker and Naga Munchetty were back on BBC Breakfast today and they were joined by none other than Bill Turnbull. After an update on his health viewers are now calling for him back on their screens as he continues to go through treatment for his cancer.

Dan began: “It was quite a footballing moment on Monday night as Wickham Wanderers secured a place in the second tier of English football for the first time in 130 years history of the club it was incredible.”

Naga and Dan were joined by Bill Turnbull and manager Gareth Ainsworth, but what Naga really wanted to know was how Bill was doing.

Bill Turnbull was told by doctors he had prostate cancer back in March 2018.

Since then, the presenter has undergone a huge number of treatments in the hopes of prolonging his life. 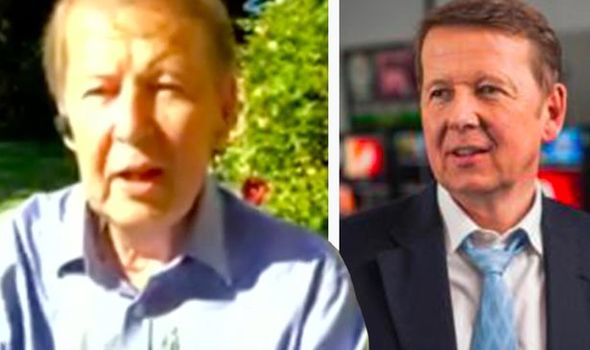 Naga asked: “So what we want to know is, how are you?”

Bill explained: “I am pretty good at the moment, and I am on a new treatment and so far the results are encouraging.

“It’s a rollercoaster and you never want to look too far ahead.”

BBC Breakfast were ecstatic to see Bill and some called for him to return to the red sofa to present.

“Good to see Bill on screen again #BBCBreakfast,” someone said.

Another wrote: “I miss Bill Turnbull, he was the reason I started watching #bbcbreakfast his dry, subtle wit is sorely lacking these days…”

“#BBCBreakfast. Bill turnbull A proper presenter of years gone by,” a viewer commented.

One fan added: “@BBCBreakfast and @BBCNews Hindsight is a great tool.   The BBC Breakfast has NEVER been the same since Bill Turnbull left……its a disgraceful shambles and not impartial……pity you haven’t been successful in filling Bill’s honest gentleman’s shoes.”