The BBC has apologised on-air after being fiercely criticised for mistakenly flashing up a picture of Raheem Sterling while reporting on a player who has been arrested on suspicion of rape.

It was being reported that the Premier League club whose player has been arrested on suspicion of rape is not suspending him.

The accused, who cannot be named for legal reasons, was arrested earlier this month and was later re-arrested for two more alleged attacks on a different woman.

However, when this latest update was discussed on BBC News on Thursday morning, host Mike Bushell appeared with a picture of new Chelsea striker Sterling in the background, who is not the player who was arrested.

Former Manchester City forward Sterling was announced as Chelsea’s latest signing on Tuesday, with a price tag of £50million.

His arrival at the club was confirmed yesterday, with pictures of Sterling in his new kit. 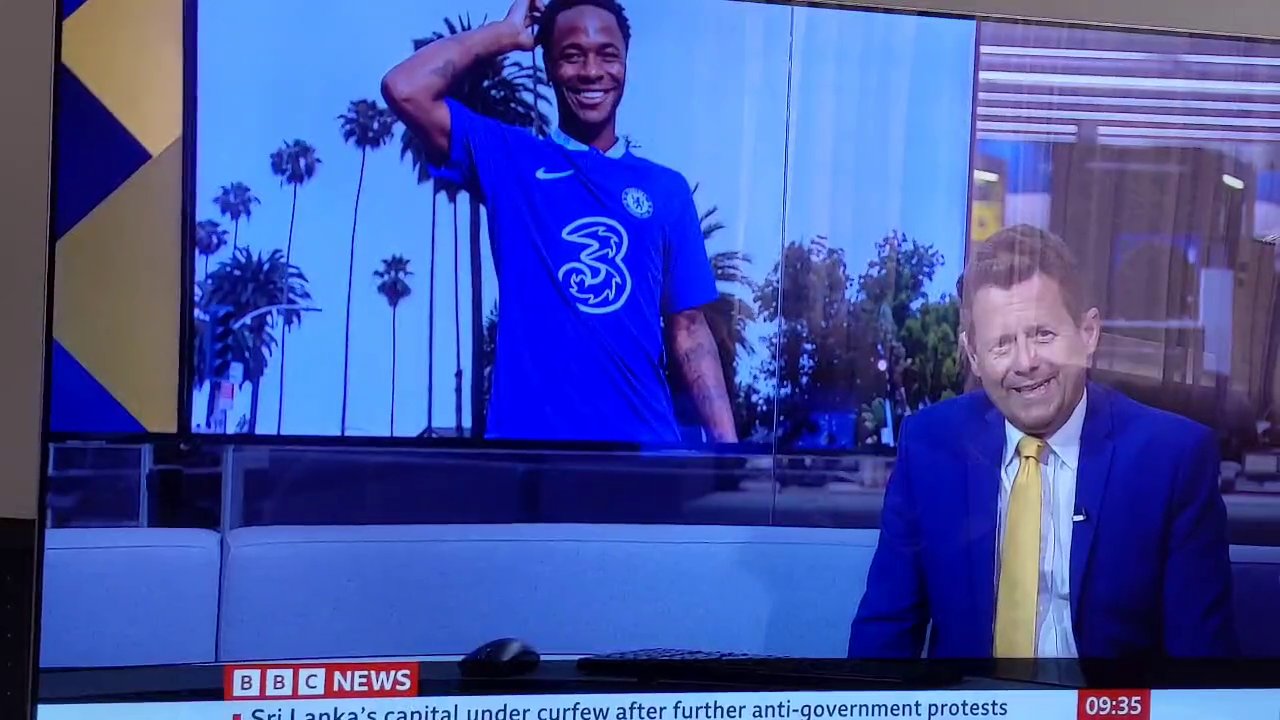 It was one of these snaps was wrongly displayed on the screen behind Bushell when he gave a rundown of the latest sports headlines on BBC News.

The host said: ‘A Premier League player arrested on suspicion of rape has not been suspended and can fulfil his professional…’ before tailing off suddenly.

The picture then flashed off the screen, returning to the BBC Sport title card.

Bushell then went on to say: ‘We’ll have more on that story a bit later on.

‘Was going to say, they can still travel, the player has not been named, still can travel and fulfil the arrangements of the team’s pre-season.’

The host then moved swiftly on after the awkward moment, by giving updates on hockey.

The BBC News channel has since issued an on-air apology following the error in their sports bulletin.

They said: ‘In our sports bulletin this morning, owing to a technical error the wrong picture appeared in connection with the story of a Premier League player arrested over alleged sexual offences.

‘A picture of a different and wholly unconnected player was shown. We apologise for this mistake.’

They told Metro.co.uk they will repeat this apology in their next sports bulletin on the News channel.

Viewers at home previously pointed out the error from the broadcaster, blasting them for the mistake.

One wrote on Twitter: ‘Did anyone else just see the BBC News mention a footballer and rape allegations, with a picture of Raheem Sterling, that was suddenly removed and the presenter try to change the subject?! What’s going on?’

Another said: ‘Horrendous error. No excuse not being careful around such a delicate subject. Was the report prior to that about Sterling and Chelsea and the image wasn’t taken down? If the image was chosen for that story that’s really really bad.’

‘Dreadful. @BBCSport this is disgraceful,’ added a viewer.