The doe and her fawn stood in a sunbathed clearing next to the trail. As we approached, the doe startled, leaping away into the underbrush, but the spotted fawn hesitated, uncertain. We crept forward, cooing with delight, until the fawn wobbled away into the trees, tripping over its own legs. So we continued our walk, alone with the rocks and the wildflowers and the hills, pleasantly surprised every time we glimpsed the Manhattan skyline in the distance.

It was our second and final day hiking the Suffern-Bear Mountain Trail from beginning to end, both a challenging and restorative interlude from the city. Perhaps because it was the height of spring, animal sightings were plentiful: We saw frogs and salamanders and a snake, turkeys, a fox and my hiking partner even startled a bear.

Hiking opportunities abound in New York, but little surpasses the satisfaction of completing a trail in its entirety, which can be accomplished in just a few days on the Suffern-Bear Mountain Trail. The approximately 23-mile, yellow-blazed trail spans almost the full length of two state parks, Harriman and Bear Mountain. Best of all, the southern trailhead is only around 30 miles from Manhattan and easily accessible by public transportation. 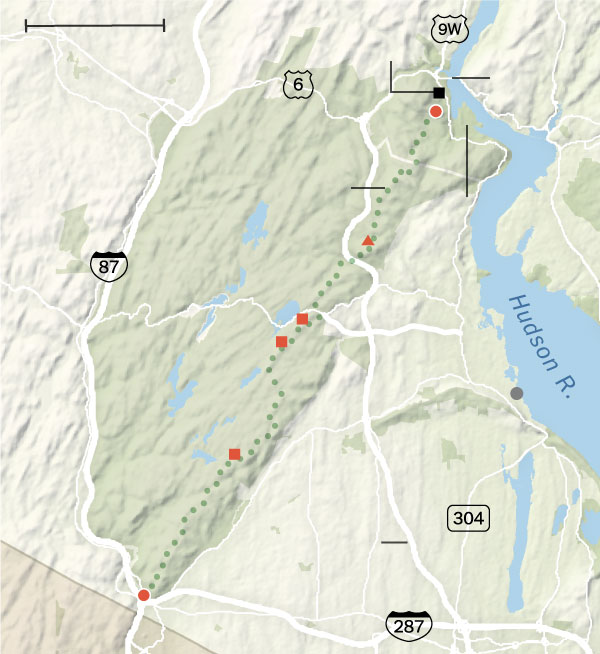 By The New York Times

The terms “end-to-ender” or “thru-hiker” are normally reserved for those who complete long-distance trails like the Appalachian Trail or the Pacific Crest Trail, which are each more than 2,000 miles long. Although these are not easy feats, the popularity of thru-hiking has only grown, year after year. But attempting a thru-hike of the A.T. or the P.C.T. requires a significant amount of money, time, and familial and professional flexibility. I’d like to suggest that one can achieve a similar satisfaction thru-hiking shorter trails without quitting your job and putting everything you own into storage.

And, if thru-hiking has already captured your heart and imagination, hiking shorter trails is a good way to put your skills and gear to the test before embarking on anything longer. 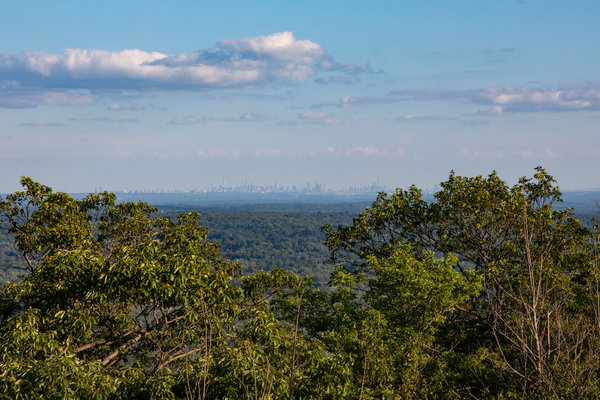 The southern end of the Suffern-Bear Mountain Trail begins a short walk away from the train station in Suffern, N.Y., at the confluence of two interstates. As we began climbing upward, the drone of the highways hummed in our ears. We quickly gained the first viewpoint, a rocky outcropping overlooking rolling hills and winding roads.

We soon dropped down to a valley, and the sounds of civilization were replaced by the crunch of our feet against rocks and dried leaves. The southern half of the trail traverses a series of boulder fields, detritus carried by a glacier more than 20,000 years ago that wreaks havoc on knees and ankles. One of these perilous tracts is nicknamed “The Valley of Dry Bones.” According to a New York Times article published when the trail was constructed in the 1920s by volunteers from New York’s walking groups, a Fresh Air Club member who worked on the trail “ingeniously” made the route “as rocky as possible.” Some of the individual boulders are large and distinctive enough — more than 20 feet tall — to have earned their own names, like “Grandma and Grandpa Rocks.” Another rock cropping is called, succinctly, “Egg.”

We stopped to lunch at Stone Memorial, the first of the three-sided stone shelters along the trail, and assessed our progress: six miles in under four hours. Hikers wanting a more leisurely, three-day trip could stop for the night here, on a hill above a rushing stream, but our destination was the Big Hill shelter, another five miles along the route. We stowed the remaining cheese, crackers and the mini jam jar, pulled on our packs and marched on.

Later that afternoon, the breeze that had dried the sweat from our necks and kept the black flies and mosquitoes at bay died down. Beneath the tree cover, the air became thick, and I swatted at the bugs around my face.

Just then, a darkening sky and a few cold drops announced a sudden downpour. We hastily donned rain jackets, but our socks and shoes were soon sodden, and the ground squelched with every step. The squall passed just a few minutes later, and the wet trees sparkled with sunlight. The bugs returned, but, I told myself, in fewer numbers.

We had the shelter to ourselves that weekday night and prepared thru-hiker standards — a Knorr Pasta Side and Idahoan powdered potatoes — over a backpacking stove. From our makeshift kitchen, we could see the bright lights of Manhattan.

The next morning, we climbed the Jackie Jones fire tower. From the enclosed viewing platform, we took in the 360-degree view of the Hudson Highlands while wind gusts rattled the window panes. From vantage points further along the trail, we could see the fire tower peeking out above the treetops, marking how far we had come.

The trail passes by an interest point labeled on the map as “ORAK ruins.” Orak, research later revealed, was a mansion built in the early 20th century by a vice president of the company that made Karo syrup, which was presumably the source of both the man’s fortune and the estate name. The buildings were only demolished in 1973, but the greenery crawling over the foundations lends it an aura of greater antiquity.

The northern half of the trail is punctuated by several steep, rocky scrambles that require judicious hand and foot placement. The most challenging of these is the ascent up Pyngyp Mountain, a climb of approximately 250 feet in less than a fifth of a mile. After hauling ourselves up the cliff face, we paused at the top to inhale water and snacks, taking in the view while hawks circled below.

The Suffern-Bear Mountain Trail briefly follows the 1779 Trail, the path taken by Revolutionary War soldiers and Brigadier General “Mad Anthony” Wayne on their way to the Battle of Stony Point. However, as the 1779 Trail was for practical purposes, it follows the path of least resistance, whereas the Suffern-Bear Mountain trail, a pleasure trail, is far more challenging. They quickly diverge.

Hikers worried that the trail might not be challenging enough can be reassured. The trail rarely follows a ridge line for long, which makes for frequent ups and downs. My GPS navigation app logged more than 5,000 feet of ascent. The trail also has the advantage of being relatively unpopulated, especially if you can come midweek. Over two days with nearly perfect weather, we saw just three people: one backpacker and two day hikers.

On the final descent we could make out, through the trees, the Hudson, the Bear Mountain Bridge and the cliffs of Anthony’s Nose, part of the Hudson Highlands on the eastern side of the Hudson River. On tired legs and sore feet, we limped into Bear Mountain Inn and ordered two beers from the front desk. We carried them to the leather and log couches to drink as the air conditioning and the euphoria of finishing a good, hard hike washed over us.

52 PLACES AND MUCH, MUCH MORE Follow our 52 Places traveler, Sebastian Modak, on Instagram as he travels the world, and discover more Travel coverage by following us on Twitter and Facebook. And sign up for our Travel Dispatch newsletter: Each week you’ll receive tips on traveling smarter, stories on hot destinations and access to photos from all over the world.