THE Hogwarts' PTA have a lot to answer for.

Between the pet owl, magic wand and flying broomstick, the kit list for a year at the School of Witchcraft and Wizardry is well out of control. 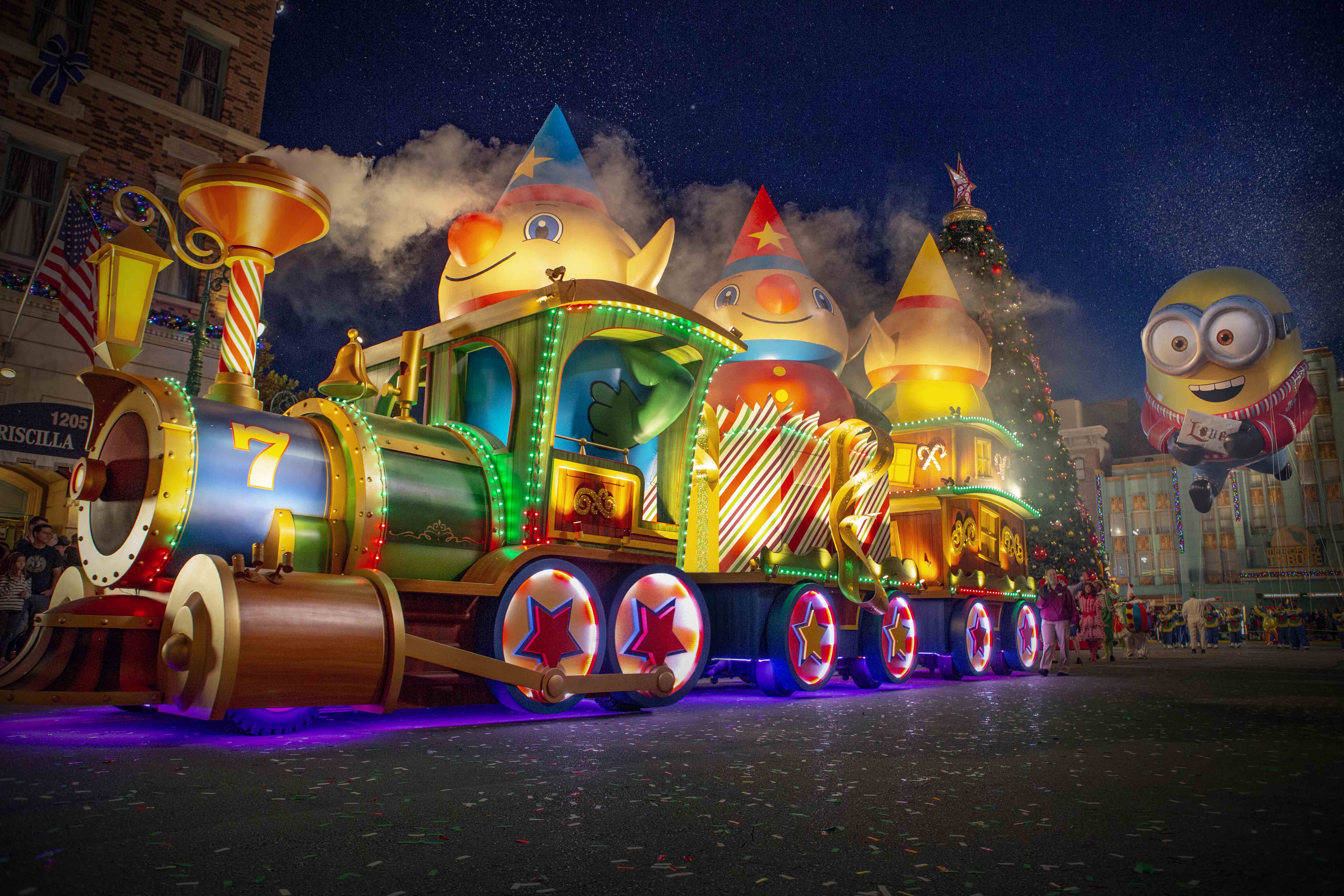 Thankfully, parents of would-be warlocks no longer need suppress their little muggle's magical mojo, as a trip to Hogwarts is now more affordable than ever.

Rooms at Universal's newest hotel, Endless Summer Resort: Surfside Inn and Suites are from just £19pppn based on a family of six sharing.

So while the Dursley's can be forgiven for locking Harry under the stairs to avoid Hogwarts' exorbitant boarding fees, there's no excuse for not visiting next year.

And there’s no better time to visit the snowy village of Hogsmeade and the rest of the Wizarding World of Harry Potter than at Christmas.

The Magic of Christmas at Hogwarts Castle is a projection show that sees a spectacle of lights dancing on the walls of the famous school, providing the perfect opportunity to get a cup of hot Butterbeer and take in the starry skyline of Harry Potter’s neighbourhood.

Scenes from the movies appear in the night sky with the castle surrounded by Christmas trees with the iconic soundtrack transporting you to the most festive location you’ll find outside of the North Pole.

The festive cheer doesn’t just stop with witches and wizards. 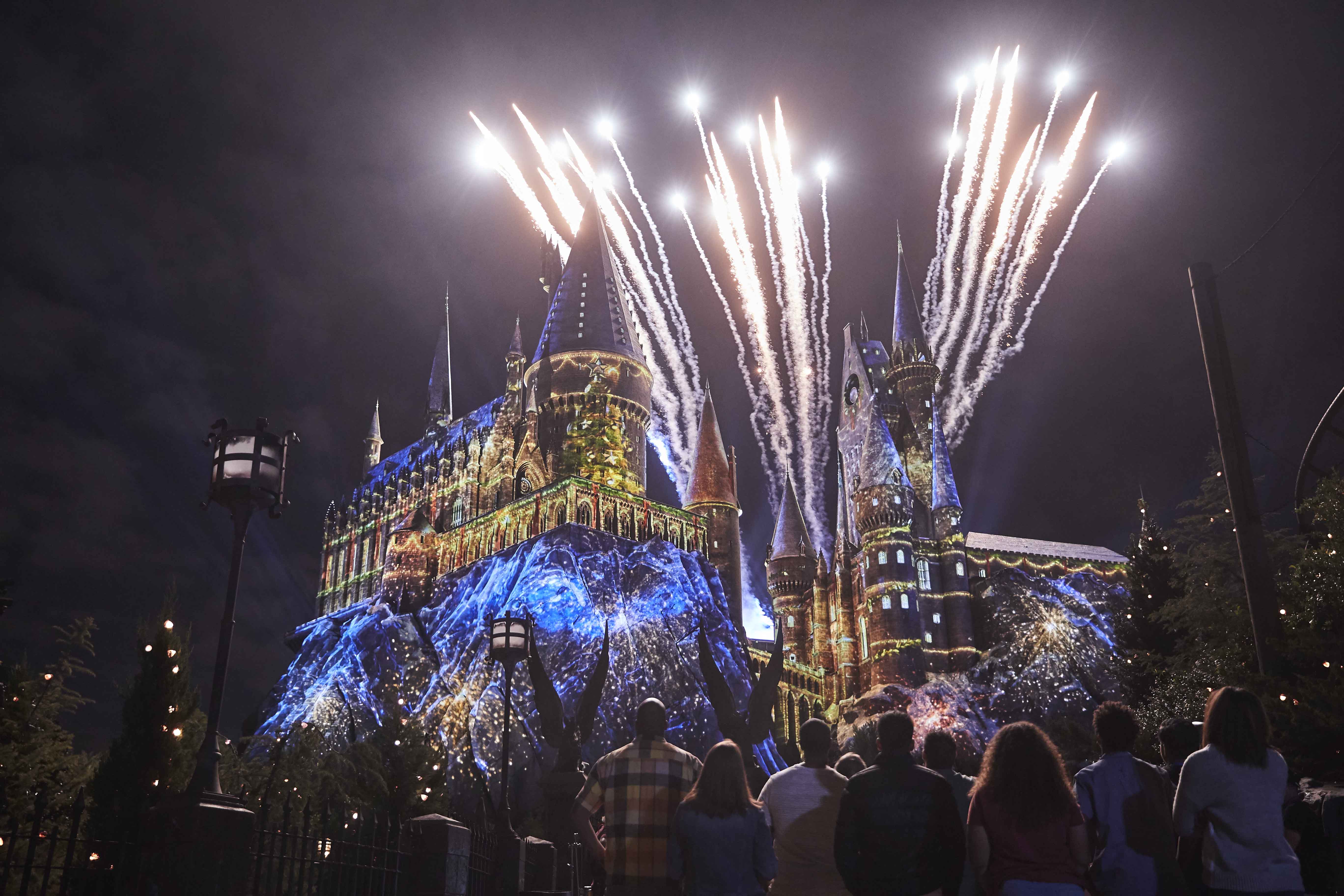 Universal Orlando’s annual Holidays events run from November straight through to January, spanning the American tradition of Thanksgiving and going up until a New Year's Eve celebration.

There’s no end of familiar faces in the parade with Shrek and his ogre family, the mischievous Minions from Despicable Me and the animals of Madagascar all getting into the festive spirit.

Father Christmas himself takes centre stage with the show-stopping finale as Santa gives one last wave to the crowds before returning to the North Pole for a busy few weeks! 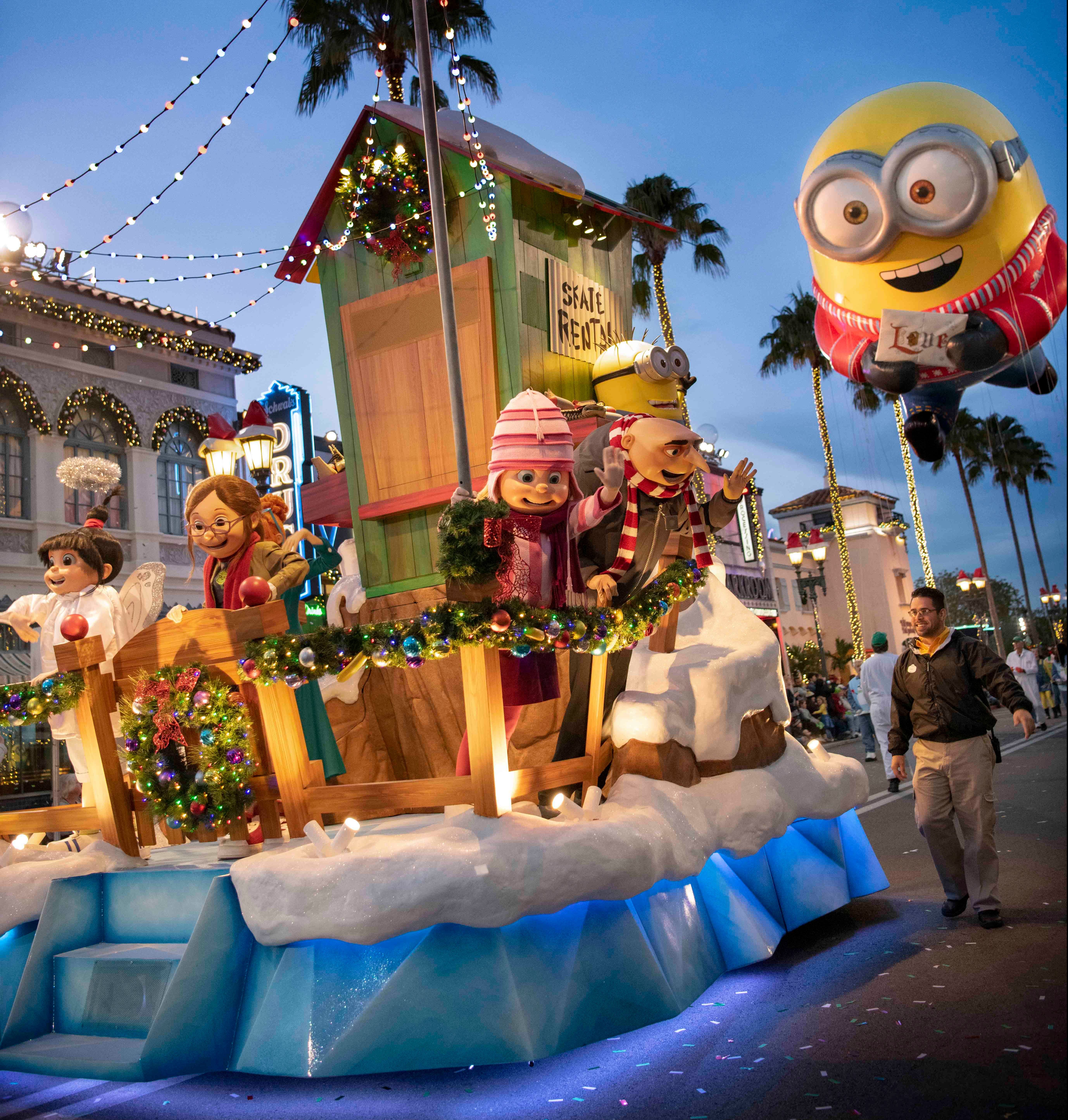 The Grinch is also back again spreading holiday cheer in his own unique way of mischief and mayhem.

Daily performances of The Grinchmas Who-Liday Spectacular recreate the 2001 festive flick, with a talented cast imitating Jim Carrey’s take on the Dr. Seuss anti-hero, who struggles to accept his neighbours love for Christmas, so attempts to ruin it for all.

It’s a Broadway scale production complete with show-stopping musical numbers, special effects, and a starring role from Max the Dog. 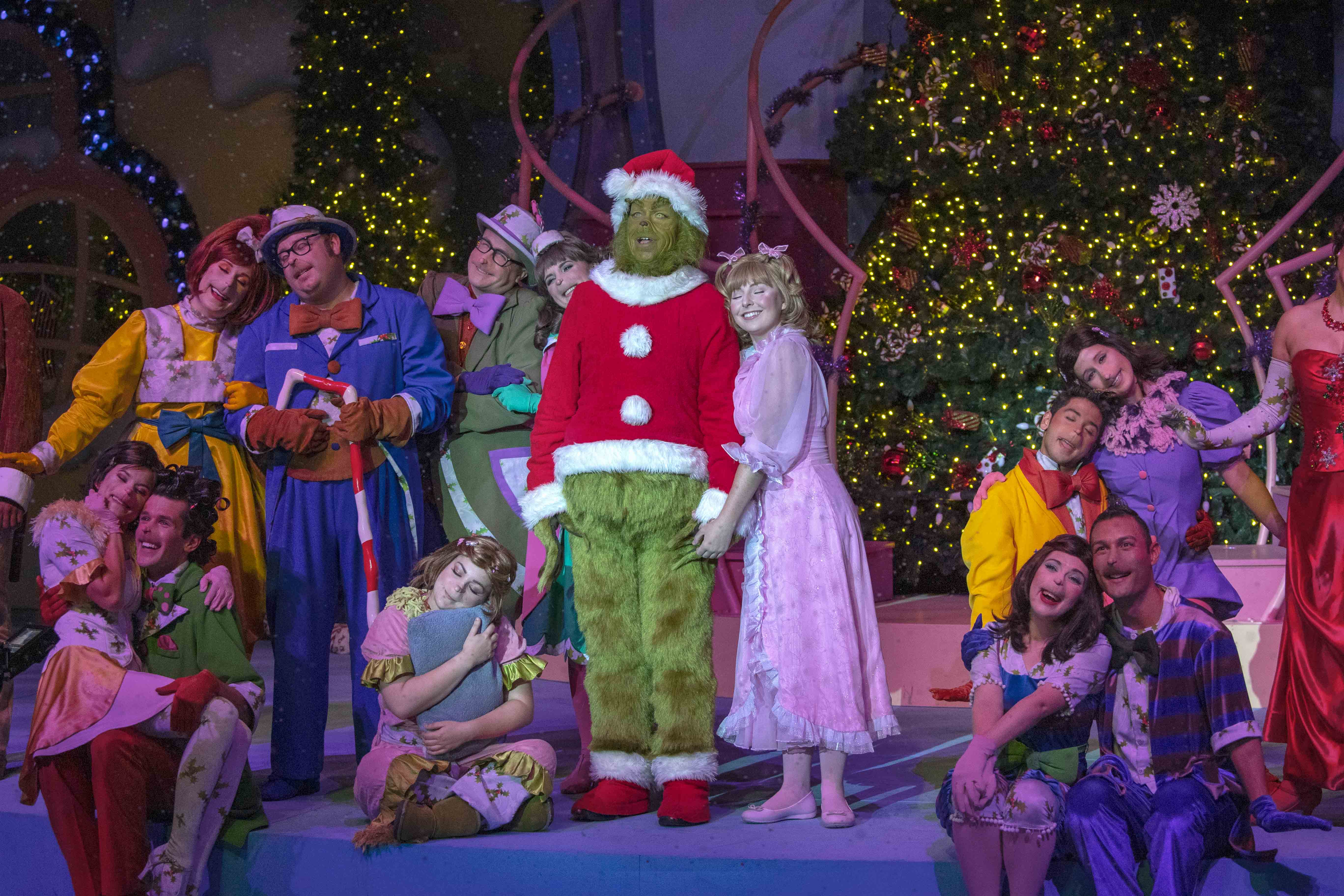 Once you’ve got your fill of festive cheer and hot Butterbeer, there are still thrills to be had across Universal Orlando’s three theme parks, and this is where the 3-Park Explorer Ticket becomes essential, allowing you to hop between the parks as often as you want for 14 days.

The Wizarding World of Harry Potter continues in both Islands of Adventure and Universal Studios, with the Hogwarts Express train being the quickest and most entertaining way to travel between the two parks.

One of my favourite parts of The Wizarding World was how immersive it was, with guests able to take a peek in all of the shops, such as Ollivanders Wand Shop, and even have a drink in the Leaky Cauldron pub – it really is a dream come true for any Potter fan.

Or if you’re more of a thrill seeker than a shopaholic, make sure you experience the newly opened Hagrid’s Magical Creatures Motorbike Adventure as you join the clumsy caretaker in soaring through the Forbidden Forest on a flying motorbike – with a different ride experience depending on whether you sit in the sidecar or drivers’ seat.

I also spent time rocking out to iconic pop songs on Hollywood Rip Ride Rocket, helped The Simpsons escape from Sideshow Bob and came face to face with King Kong himself.

While Christmas in the UK calls for the return of your winter wardrobe, a festive break in Orlando means swimwear season is back with a visit to Universal’s Volcano Bay water park.

With temperatures soaring throughout the year, you’ll be dreading the return to the British chill as you soak in the fun on thrilling water rides, or just make the most of the December sunshine at Waturi Beach. 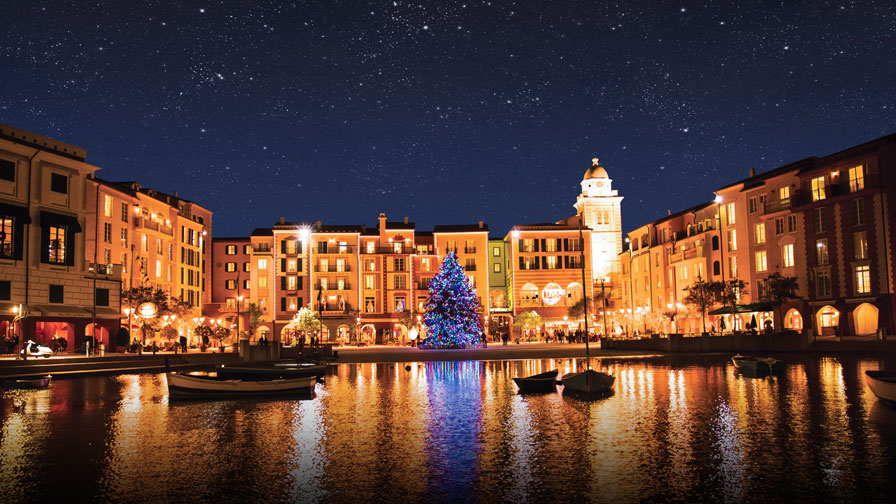 Staying on-site at Universal comes with many perks and gives families a stress-free escape for Christmas.

At Endless Summer Resort: Surfside Inn and Suites, rooms start at £55 and all meals in the on-site dining restaurants cost less than £10.

A shuttle bus service gets you straight to the action in under 10 minutes and runs through until the early hours of the morning to cater for those dining and partying at nearby CityWalk.

Accommodation options at Surfside Inn and Suites includes family rooms containing three double beds over two bedrooms and a kitchen/dining area – perfect for those who wish to self-cater.

Far more spacious than the Gryffindor common room and at a much better price.

GETTING THERE: Return flights from Gatwick to Orlando are from £272.80pp with Norwegian. See norwegian.com.

STAYING THERE: Seven nights in Universal's Endless Summer Resort – Surfside Inn and Suites – including 3 Park Explorer Tickets, is from £1,103pp based on two adults sharing. Tickets include up to 14 days unlimited access to Universal Studios, Islands of Adventure and Volcano Bay water theme park. Book with Attractions Tickets for the best deals on Orlando tickets at attractiontickets.com.