The Trump administration on Wednesday issued new rules to restrict travel by Chinese Communist Party (CCP) members and their families, according to a report.

The policy shift immediately limits the maximum validity of travel visas for the party members and families to one month and a single entry, sources told the New York Times. Previously, party members, like Chinese citizens, could obtain U.S. visitor visas for up to 10 years.

China has about 92 million Communist Party members. The new guidelines will let U.S. officials determine someone’s party status based on their visa application, interview, and understanding of the party, which the Times asserted will likely affect China’s top government and business leaders rather than the millions of other lower-level members. 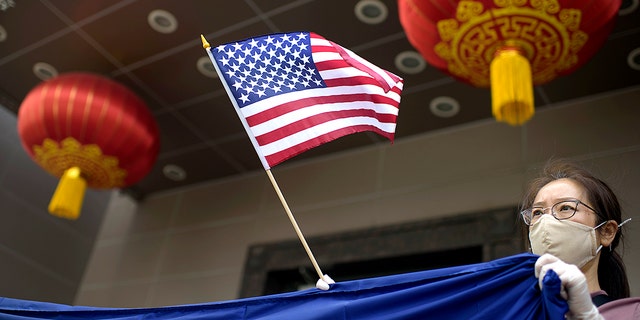 A protester holds a U.S. flag outside the Chinese consulate in Houston, July 24, 2020, after the U.S. State Department ordered China to close the consulate. (Getty Images)

A State Department spokesman told the paper the decision was a part of “ongoing policy, regulatory, and law-enforcement action across the U.S. government to protect our nation from the C.C.P.’s malign influence.”

“For decades we allowed the C.C.P. free and unfettered access to U.S. institutions and businesses while these same privileges were never extended freely to U.S. citizens in China,” the statement said.

The move is likely to increase tensions between the U.S. and China, which had seen the diplomatic goodwill between the two countries stretched thin over coronavirus, military maneuvers in the South China Sea, and the presidential election.

Since signing a phase one trade deal with China in January, the two countries have been busy slapping sanctions on one another. The U.S. shuttered a Chinese consulate in Texas earlier this year while China has moved to expel U.S. journalists from the country.

Earlier this year, Secretary of State Mike Pompeo unveiled a set of restrictions on Chinese diplomats operating inside the U.S., a move he said was payback for similar situations facing American diplomats in China. The Trump administration also imposed sanctions and visa restrictions on multiple Chinese Communist Party officials believed to be responsible for human rights abuses in the Xinjiang province.

In June, Pompeo announced restrictions against members of the CCP, declaring that the U.S. has banned visas for members affiliated with the obstruction of Hong Kong’s autonomy.

“President Trump promised to punish the Chinese Communist Party (CCP) officials who were responsible for eviscerating Hong Kong’s freedoms,” Pompeo said in a statement, at the time.

The new restrictions will likely result in some form of retaliation from Beijing, although travel between China and the United States has already been hugely impacted by the pandemic. It's yet to be seen how the move will impact tensions between China and the upcoming administration of President-elect Joe Biden.

Nearly three million Chinese citizens traveled to the U.S., in 2018, according to the Times.