The most beautiful villages in Spain revealed: The hamlets that have received official recognition for being pin-up pretty

Villages that kiss mountaintop clouds, hamlets of wedding-white houses that overlook the sea, settlements where the streets are lined with millions of mosaic tiles – these are just a few of the calendar-worthy sites that you’ll find in the official list of Spain’s most beautiful villages.

Composed by Los Pueblos mas Bonitos de Espana – aka The Association of the Most Beautiful Villages of Spain – the list now features 94 settlements.

The entries are spread across the length and breadth of the country and include villages in the Canary and Balearic islands.

The association was set up in 2011 and it has 40 strict criteria concerning the places it considers for inclusion in its list.

Villages must demonstrate care of heritage and green areas, for example, to make the cut.

Here we present some of the most seductive sirens from the collection. 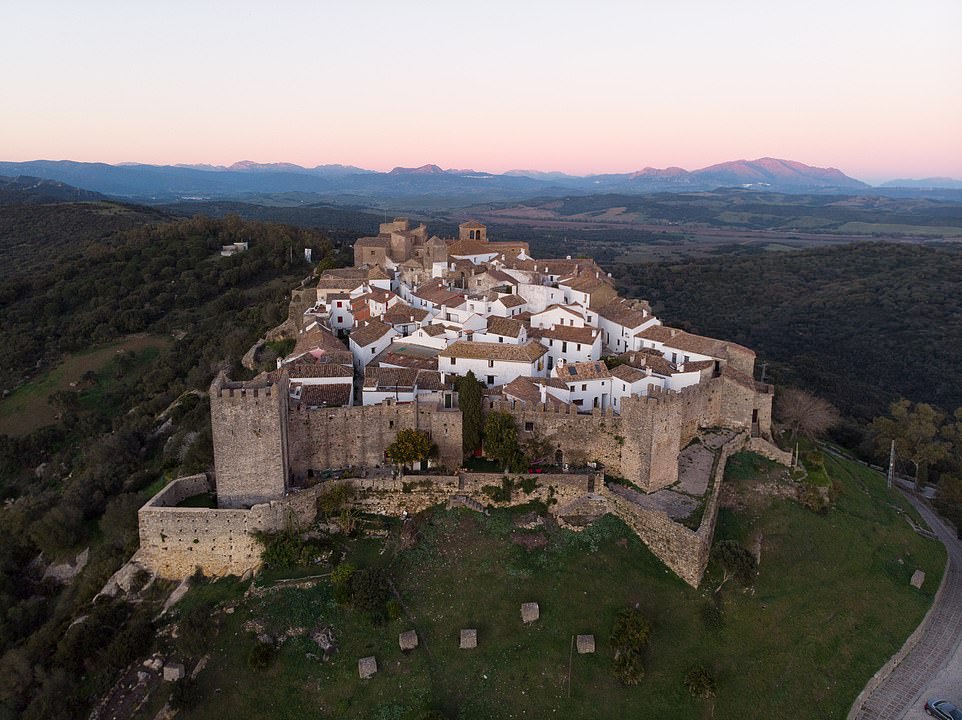 Castellar de la Frontera crowns a hillside within the cork oak groves of Los Alcornocales Natural Park in Cadiz. The village of whitewashed buildings is belted up inside the walls of a Moorish fortress. On clear days the views stretch out over to Gibraltar and the North African coast 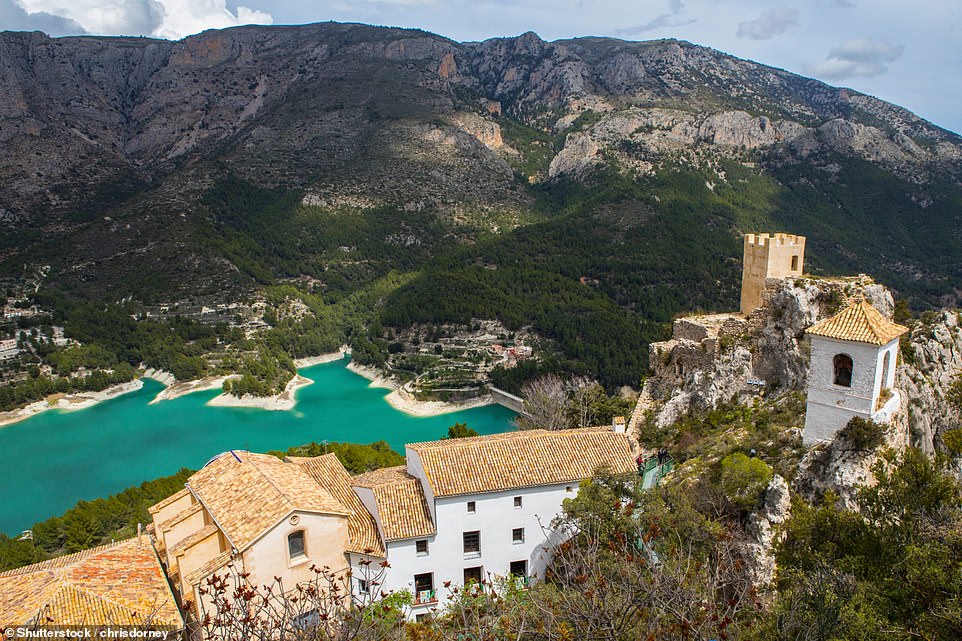 El Castell de Guadalest is only 25 kilometres (15 miles) from Benidorm, but it’s a world apart in terms of looks. This Valencian village teeters on top of one of the limestone cliffs of the Sierra d’Aitana and peers out over the teal waters of the Guadalest Reservoir. Despite being remote, its cobbled streets are lined with cafes and souvenir shops and there are the ruins of an 11th-century castle to explore 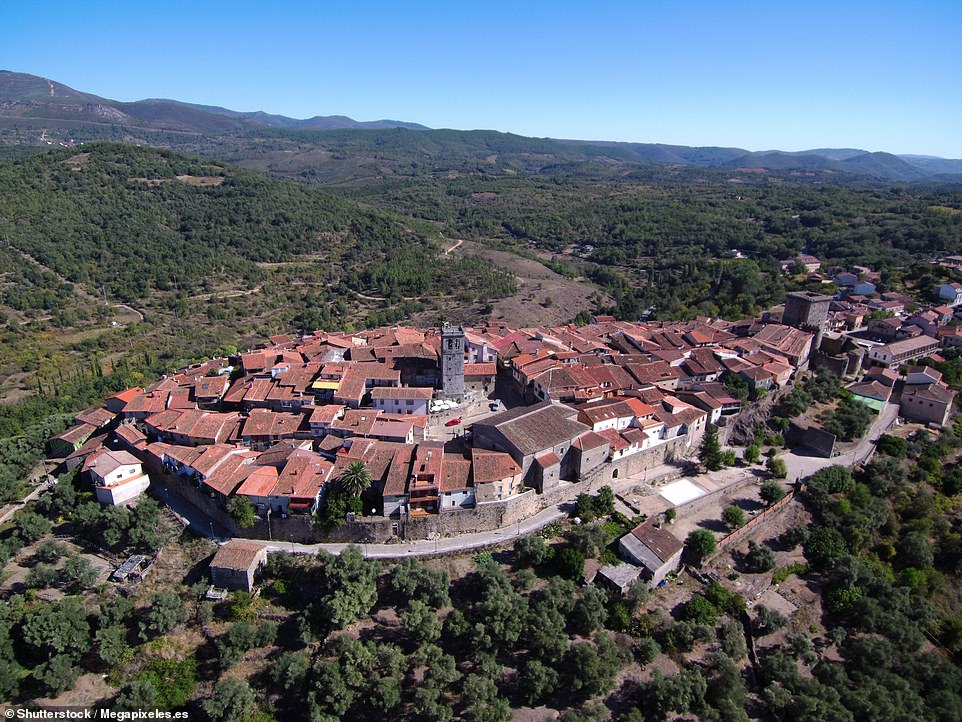 Behold the historic nugget of Miranda del Castañar in the heart of the Sierra de Francia mountain range in Salamanca Province, which is home to around 400 people – and Spain’s oldest bullring. The atmosphere is distinctly medieval, with Google reviewer Andreas Serna proclaiming that visiting there ‘is like travelling centuries back in time’. Click here for mesmerising YouTube drone footage 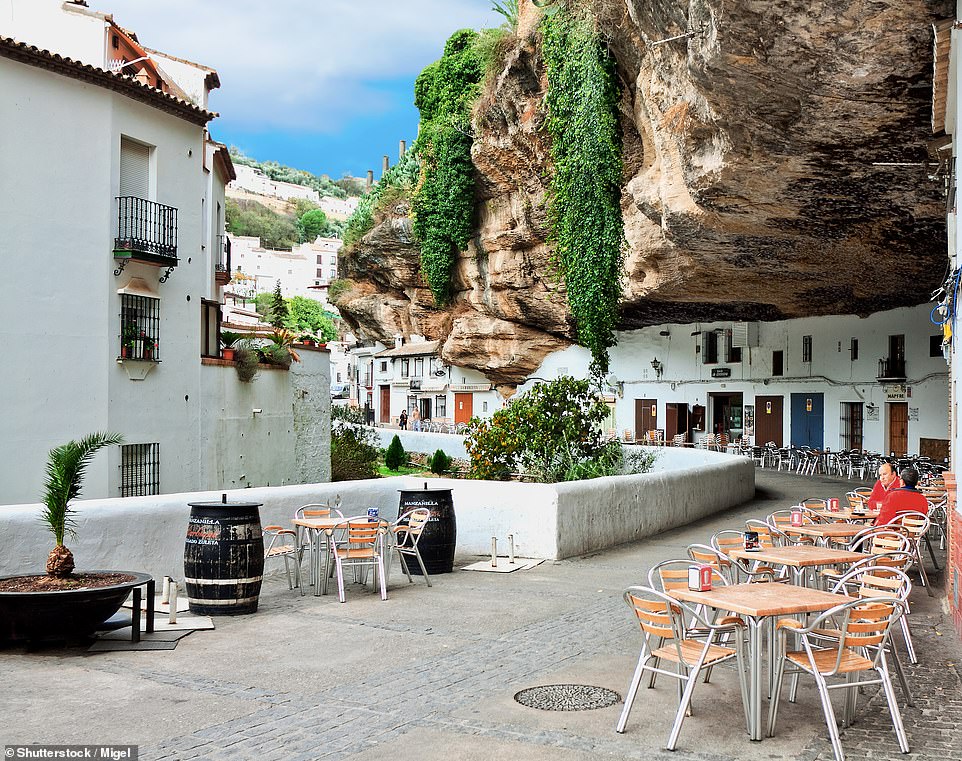 It looks like the cliffside that surrounds Setenil de las Bodegas has slowly leaked back into the settlement. The buildings of this Cadiz-based village have been purposefully built into the overhangs of the mountains though. Head to one of the abrigos bajo las rocas – aka shelters under the rocks – for a cup of coffee, or something stronger 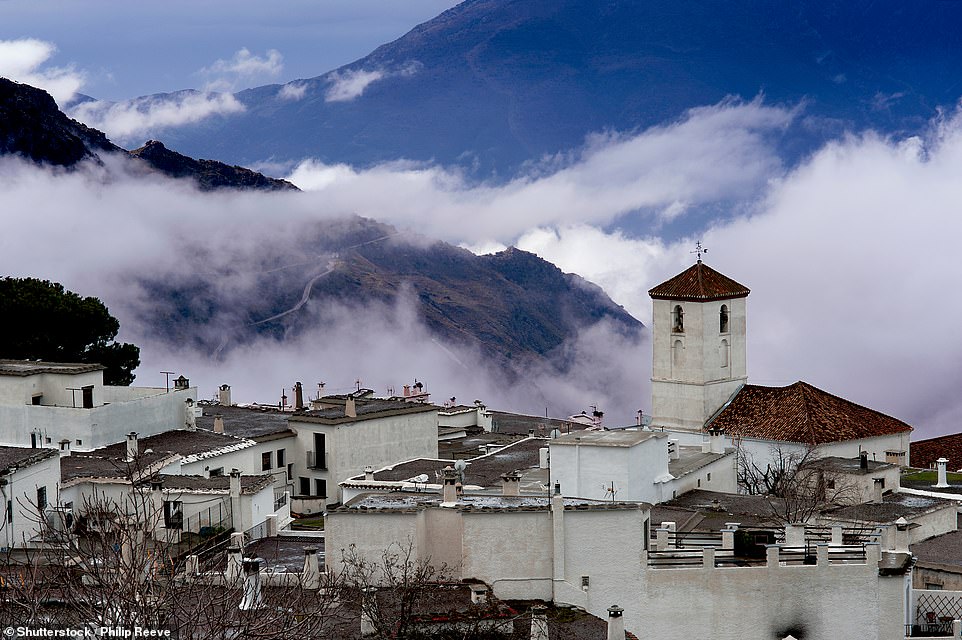 The whitewashed buildings of Capileira drape down the side of one of the Sierra Nevada mountains in Andalusia. At 1,436 metres (4,711ft) above sea level, it’s one of the highest villages in Spain, and clouds often garland its church tower 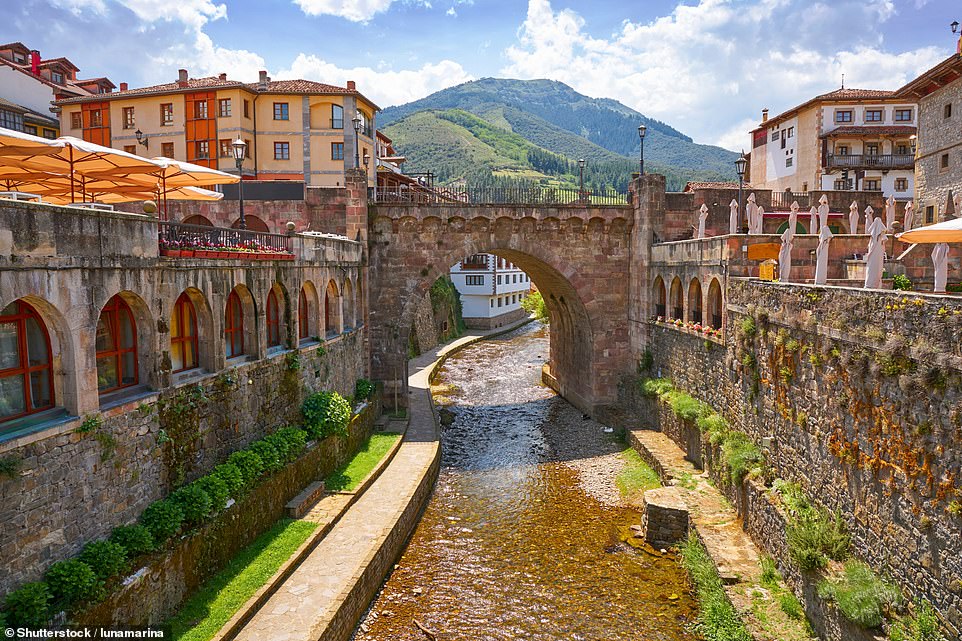 Potes, which dates back to the 9th century, stands at the confluence of the rivers Deva and Quiviesa in the middle of a valley where grape, cherry and walnut trees grow. With wood-framed balconies and windows, some of the buildings have an Alpine look to them. You can climb to the top of the village’s six-storey Tower of Infantado to look down on the red-tiled roofs of the village and out to the mountains in the distance 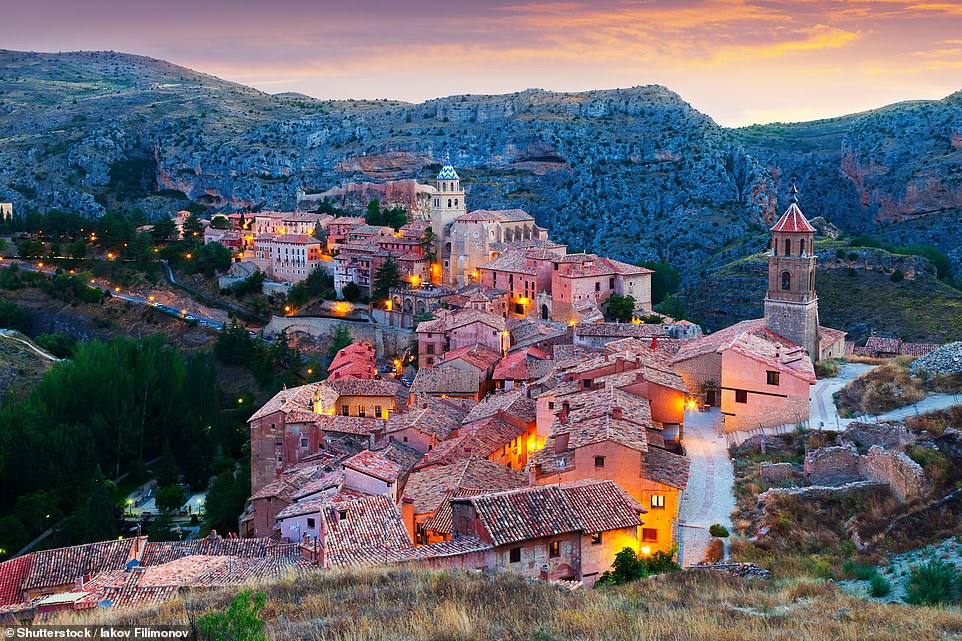 Albarracín is a town of blush-coloured buildings that’s tucked up inside the limestone mountains of the Sierra de Albarracín, two hours’ drive from Valencia. An independent mini-state in Medieval times, it’s home to a 16th-century cathedral has impressive perimeter walls and was declared a Historic-Artistic Site in 1961. Unesco is keen to make it a World Heritage Site 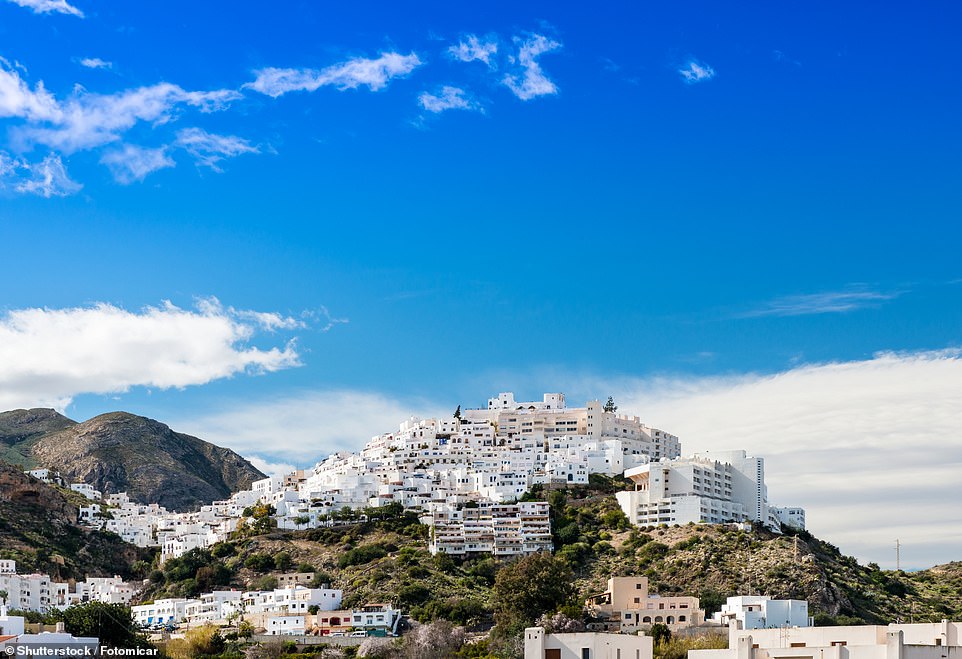 The china-white buildings of Mojacar crest the top of a steep hill on the south-east coast of Spain and overlook the Mediterranean Sea. The once Moorish town has its own good luck symbol, the Mojacar Man or Indalo, and all sorts of souvenirs linked to this stick-limbed figure can be bought in the town’s souvenir shops 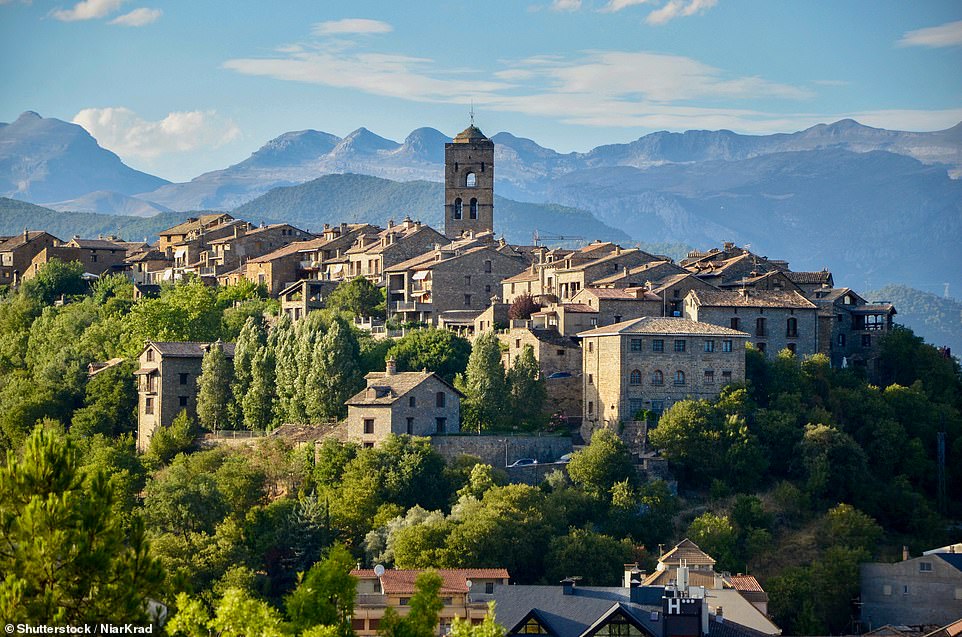 Set against the backdrop of the Pyrenees in northern Spain, Aínsa is a village of stone-built houses, cobbles, cast-iron lanterns and balconies brightened with potted plants and hanging baskets. One of the highlights of a visit is the 11th-century Santa Maria church, where you can creep around the crypt and climb the bell tower 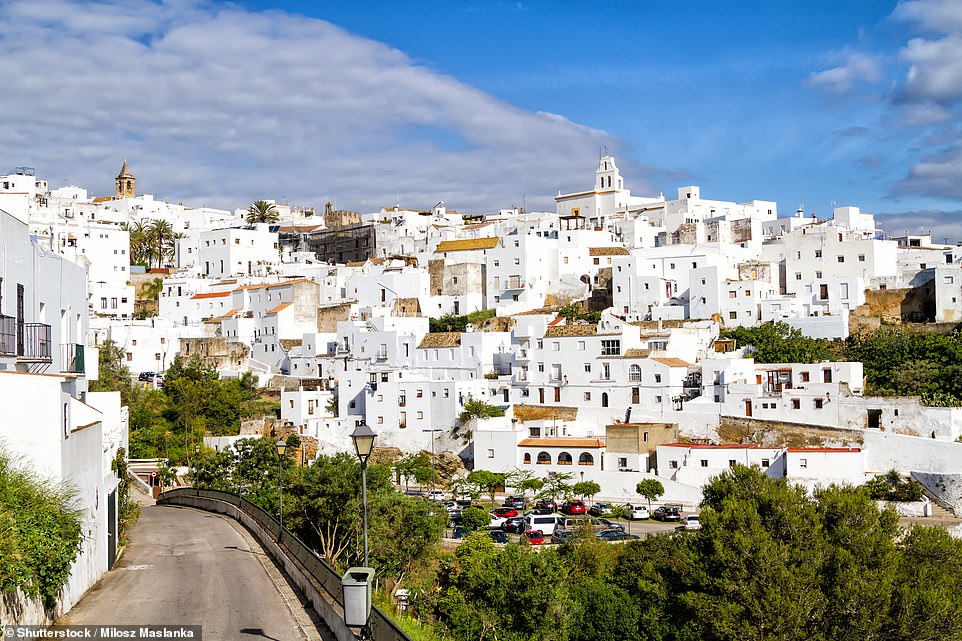 The buildings of Vejer de la Frontera look like a snowdrift on the side of one of the Andalucian mountains, 50 kilometres (31 miles) from Cadiz. Climb the castle for views of the surrounding orchards, orange groves and the Atlantic Ocean in the distance, duck into the village’s churches, and claim a table in one of the tapas places on the Plaza de España to try the local cured meats and cheeses 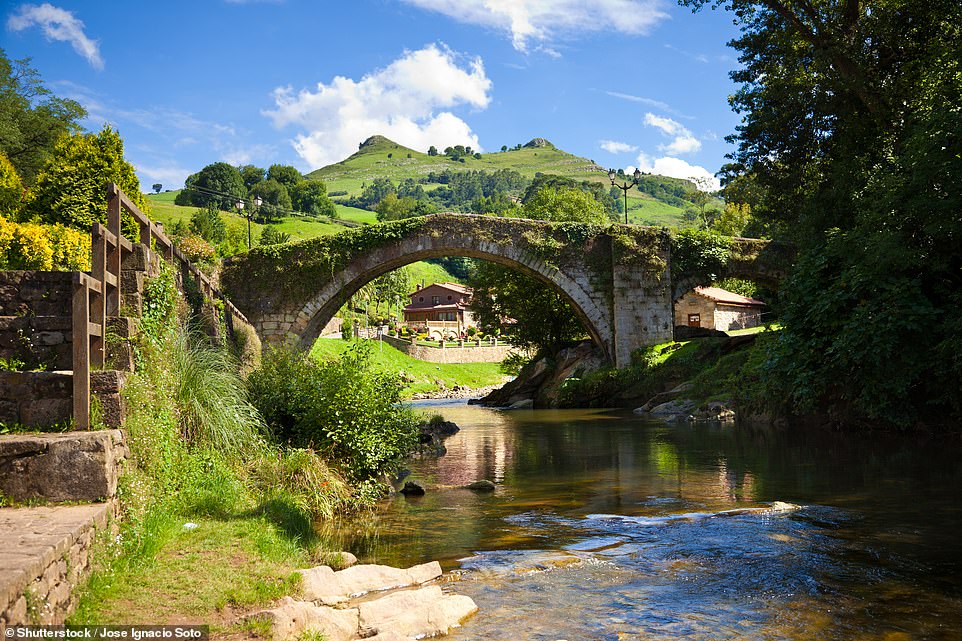 There’s a look of Middle-earth’s Shire to Liérganes, a half-hour drive from Santander on the north coast of Spain. The Miera River babbles by the side of the village and green hillsides envelop it. There are a few churches to amble around here and the main photo point is the moss-covered Medieval bridge 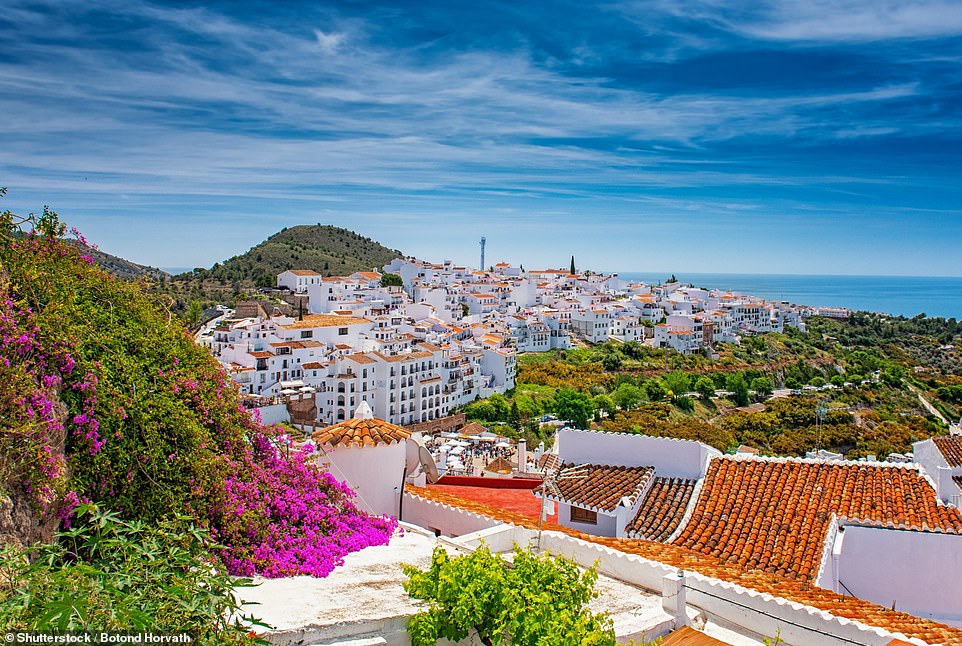 Frigiliana is a village of wedding-cake-white houses and mosaic-lined streets. One of the big draws of this place is the views it delivers over the Costa del Sol and the Mediterranean Sea.  It’s also popular with walkers thanks to its proximity to the vast gorge-filled sierras of Tejeda, Almijara and Alhama Natural Park 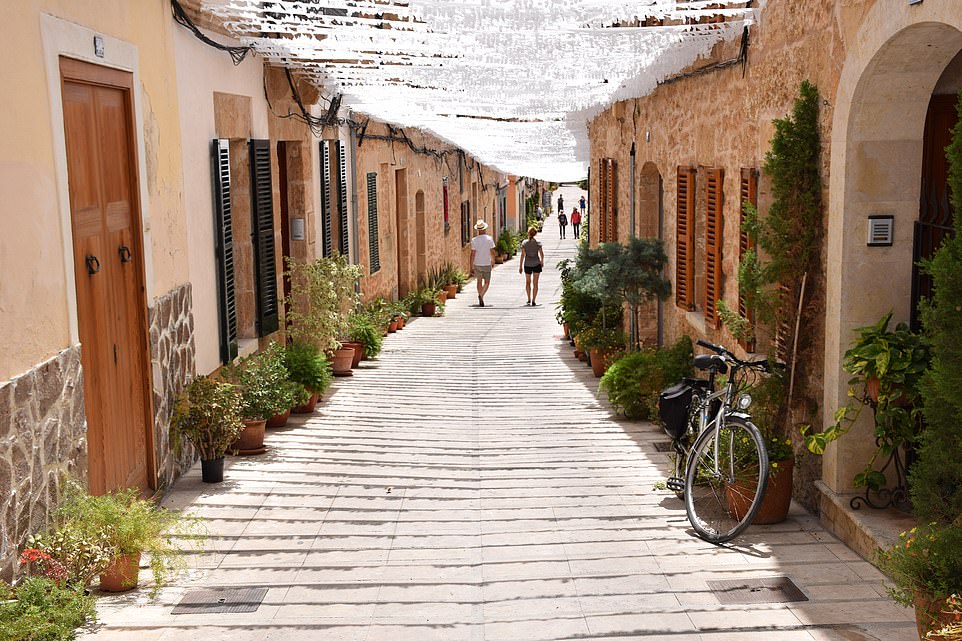 Close to the north-east coast of Majorca, Alcudia is corralled by a Medieval city wall. Inside, the streets are laid out in a scribble shape and the buildings are either bare brick or painted in canary yellows and terracotta. At the heart of it all, there’s the 17th-century Church of St Jaume 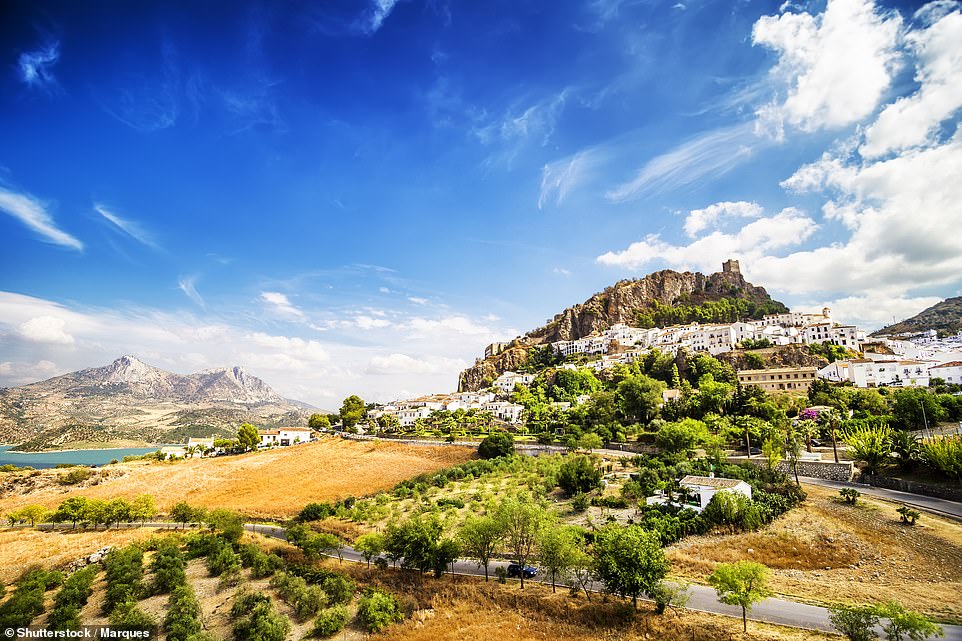 The salt-white houses of Zahara drift down the hillside at the foot of a sheer rocky outcrop with a Moorish castle on top. Visitors can do the steep climb past cacti and wildflowers to the top part of the castle, known as Homage Tower. Those that don’t have the inclination to climb can mooch around the shops and cafés in the photogenic town square 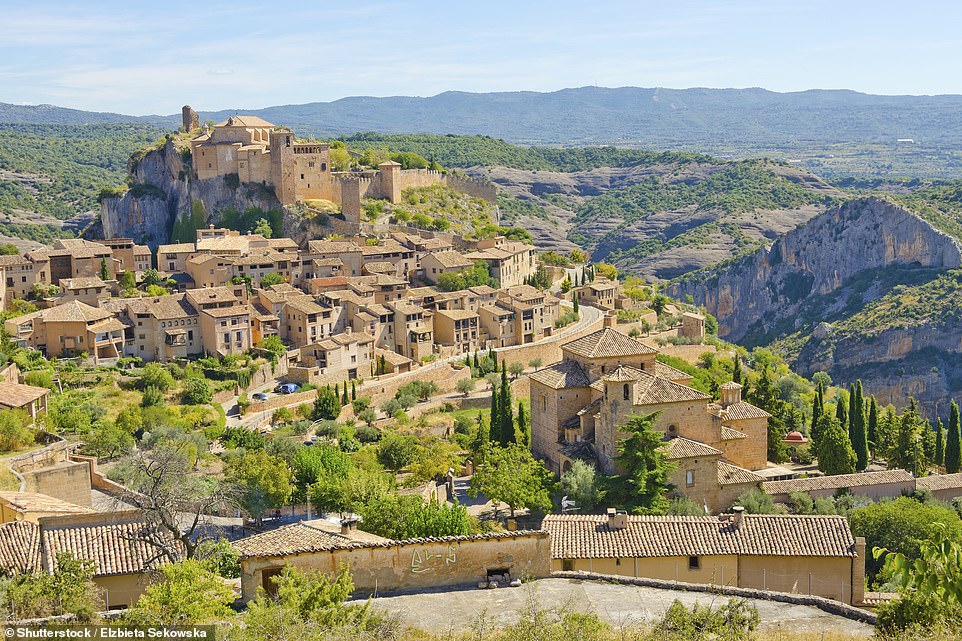 Alquézar in northern Spain is coddled by national park and there are viewpoints and lookouts at almost all of the village’s compass points to the surrounding Sierra de Guara mountain range. Its sublime Collegiate Church was declared a National Monument in 1931, says The Association of the Most Beautiful Villages 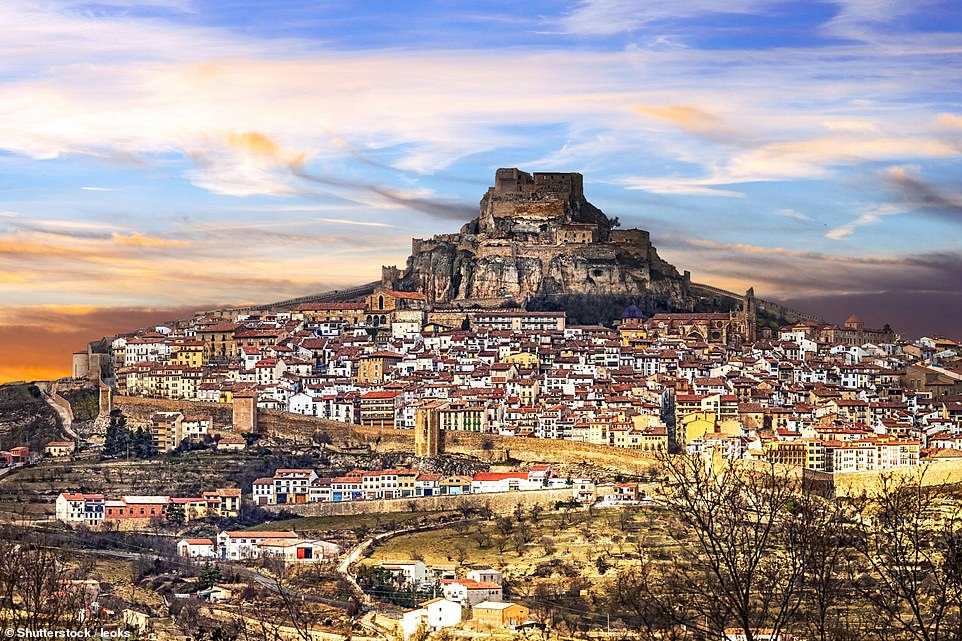 A massive 13th-century castle stands sentry over the hilltop town of Morella in eastern Spain. One of the highlights of a visit here is hiking up to the castle and exploring its ruined ramparts. Other must-sees include the aqueduct, the Convent of St Francis and St Mary’s Church 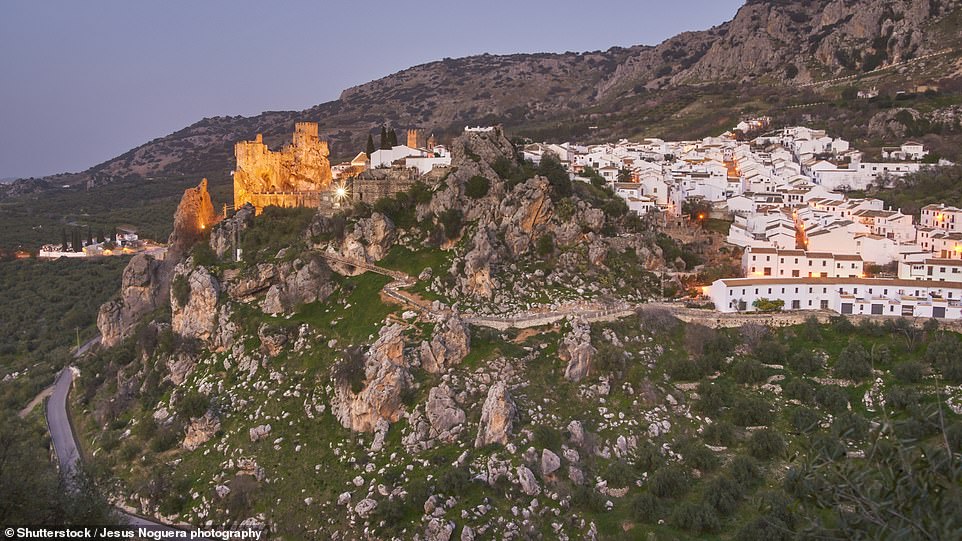 A clifftop castle and whitewashed houses that trickle down the hillside make up the village of Zuheros, in Cordoba province. It’s also right on the edge of Las Sierras Subbéticas Natural Park with its 320-square-kilometres (123 square miles) of craggy limestone cliffs, caves, streams and walking routes 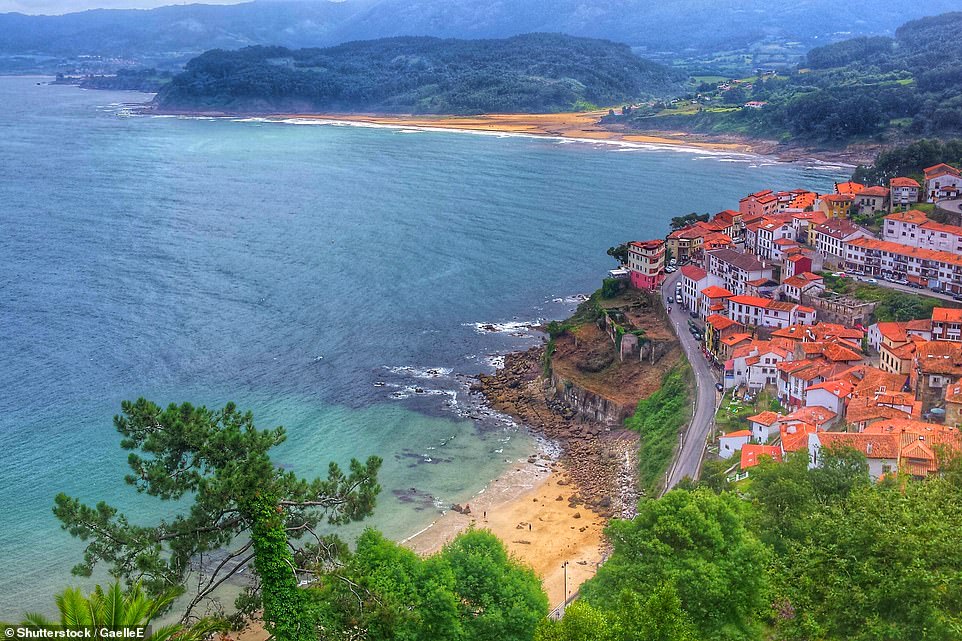 The white-walled, rusty-roofed houses of Llastres are set out in tiers on a sloping hillside overlooking the Bay of Biscay in northern Spain. There’s a clock tower and a church to take in and a handful of sea view restaurants selling locally caught seafood 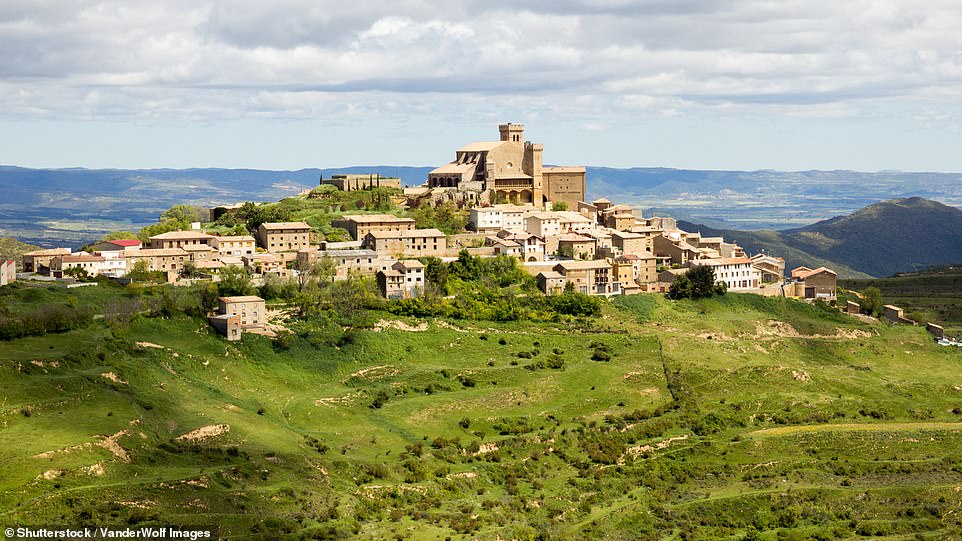 The honey-hued village of Ujue crowns a hillside in northern Spain, an hour’s drive from Pamplona. Highlights of a visit here include seeing the Romanesque-Gothic church, sponging in the views from the lookout point and dining in one of the mountain-view restaurants 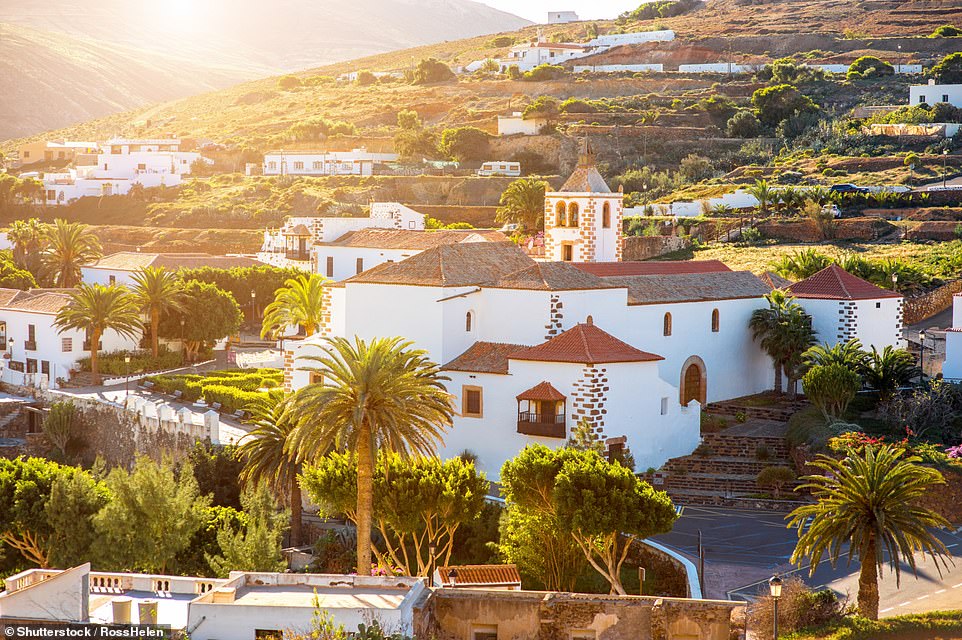 Betancuria appears like a mirage in the middle of an arid rocky region in western Fuerteventura, the second-largest Canary Island. Palm trees sprout out of the ground and the houses are bright white. There’s a 17th-century church and an archaeological museum to explore here and you can visit as part of a day tour of the island

South-west of the city of Badajoz, near the border with Portugal, lies whitewashed and fortified Olivenza – and its eye-catching churches and castles. Its origins can be traced back to the 12th century and up until 1801, it was actually Portuguese. To add to the intrigue, some of the older residents still speak the language 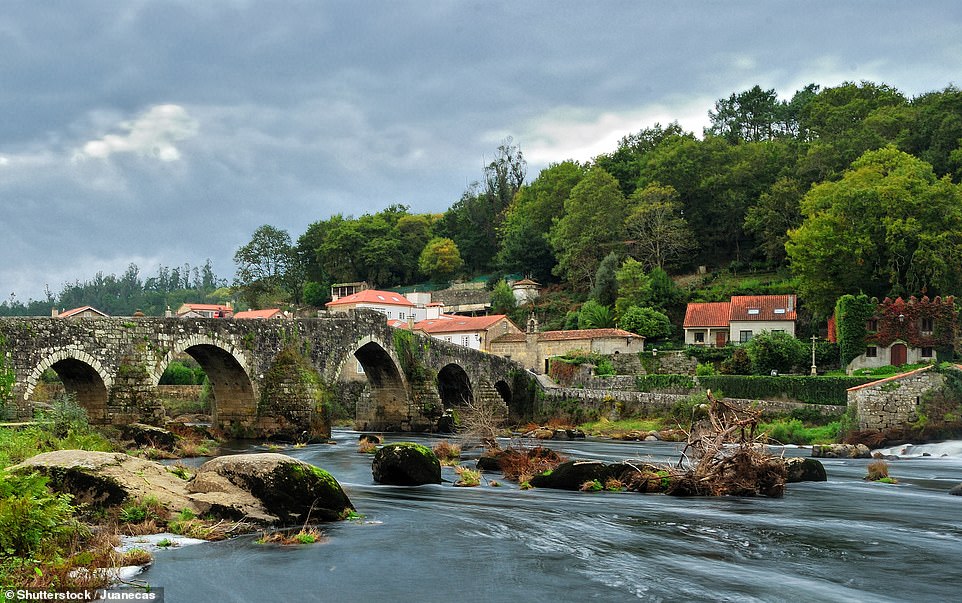 The imposing 13th-century Romanesque bridge is one of the obvious attractions in tiny Ponte Maceira in A Coruna province, which has a population of just 60. Delve a little deeper and you’ll discover amazing cheesecake in the local restaurants and cobbled streets time seems to have forgotten 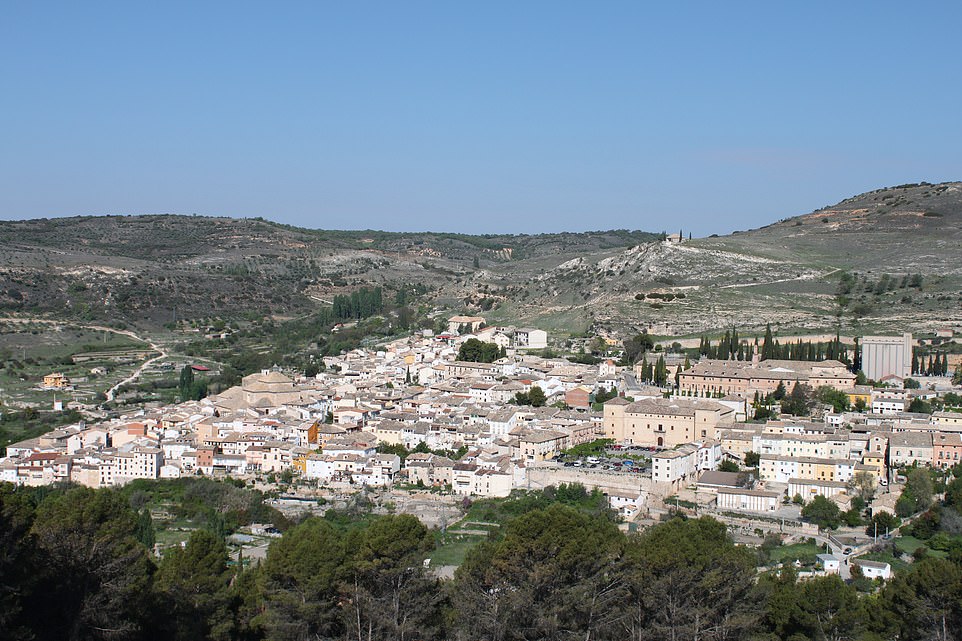 Pastrana in the Castile region is, according to Lonely Planet – ‘not to be missed’. Why? ‘Twisting cobbled streets flanked by honey-coloured buildings’, for starters. And then there are the ‘atmospheric bars with tables on the cobblestones’. To these plus points we can add artisanal shops and the Renaissance-style Ducal Palace, which has been a Spanish Property of Cultural Interest since 1941 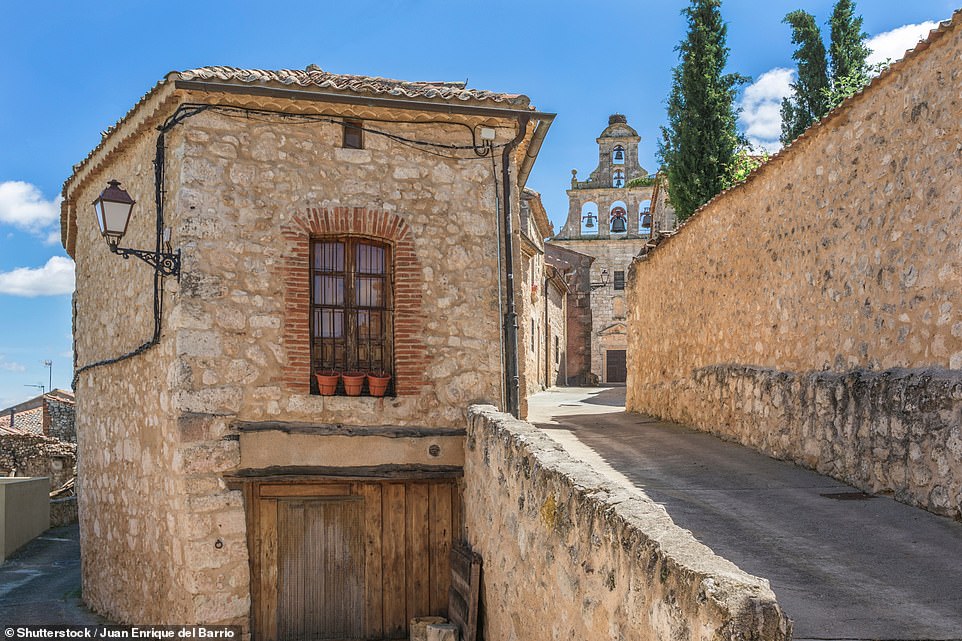 Maderuelo, north of Madrid in the Segovia province, lines a hilltop over a reservoir. Just 149 people live here – and this drone footage, along with the picture above of its medieval streets and Church of Santa Maria, shows how very lucky they are 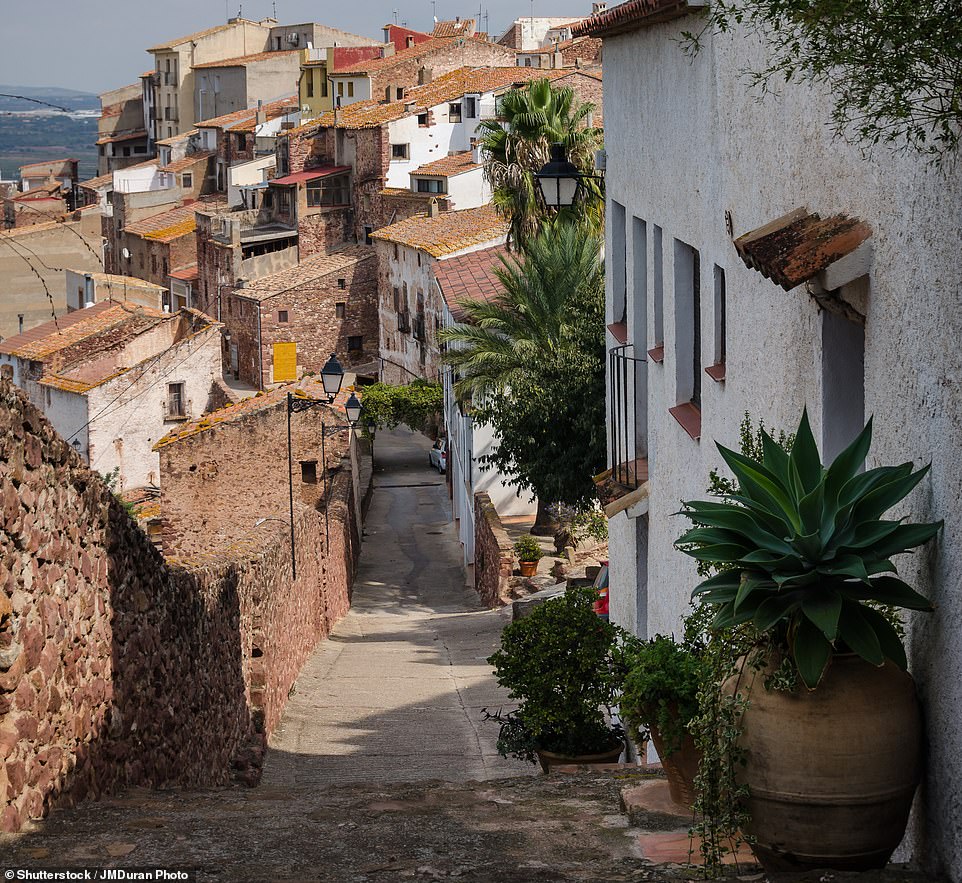 Delightfully boutique-y Vilafamés, in the Castellon province in the east of Spain, is one of the country’s premier spots for simply wandering hither and thither. Gaze upon the surrounding countryside, stroll the quaint streets and admire the 14th-century castle ruins 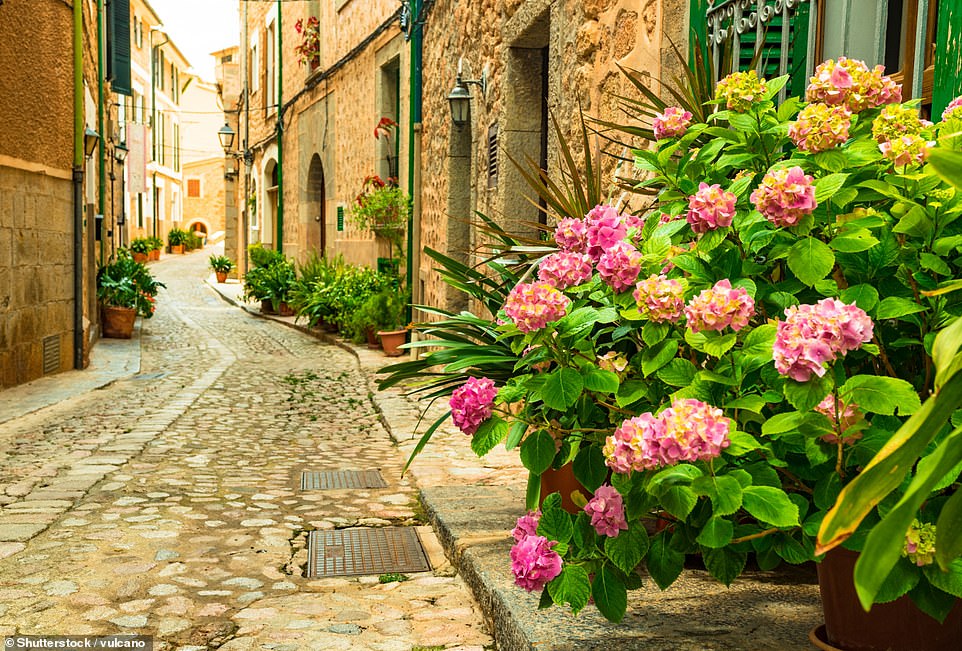 Thought Majorca was all beaches and bars? Think again. It’s also home to the impossibly cute village of Fornalutx, which lies in the bosom of the Serra de Tramuntana mountains 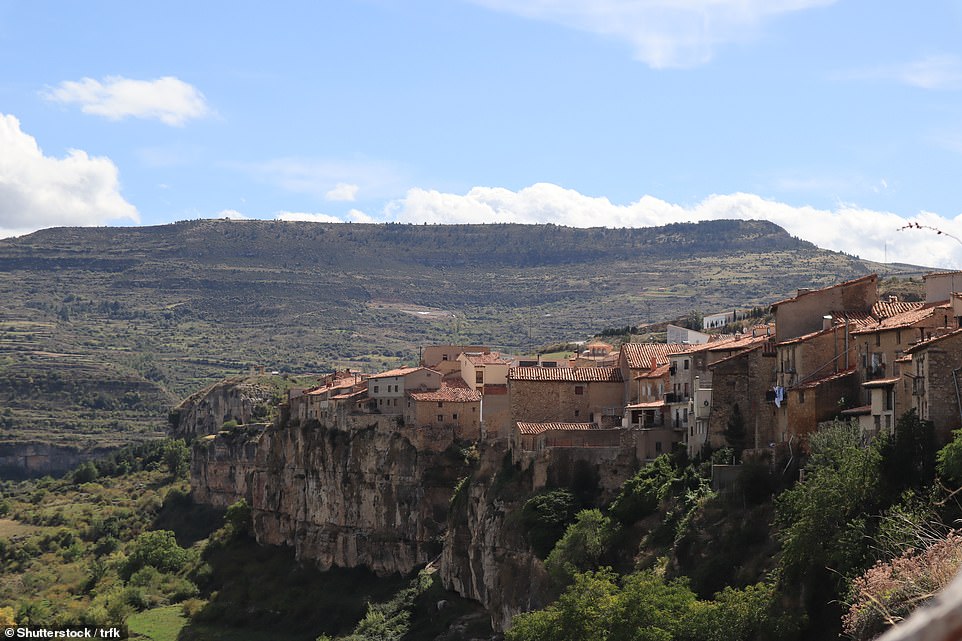 Perched on a slab of limestone rock at an altitude of 4,265ft (1,300 metres), Cantavieja, in the province of Teruel, is striking to say the least. Don’t miss the restored Templar castle 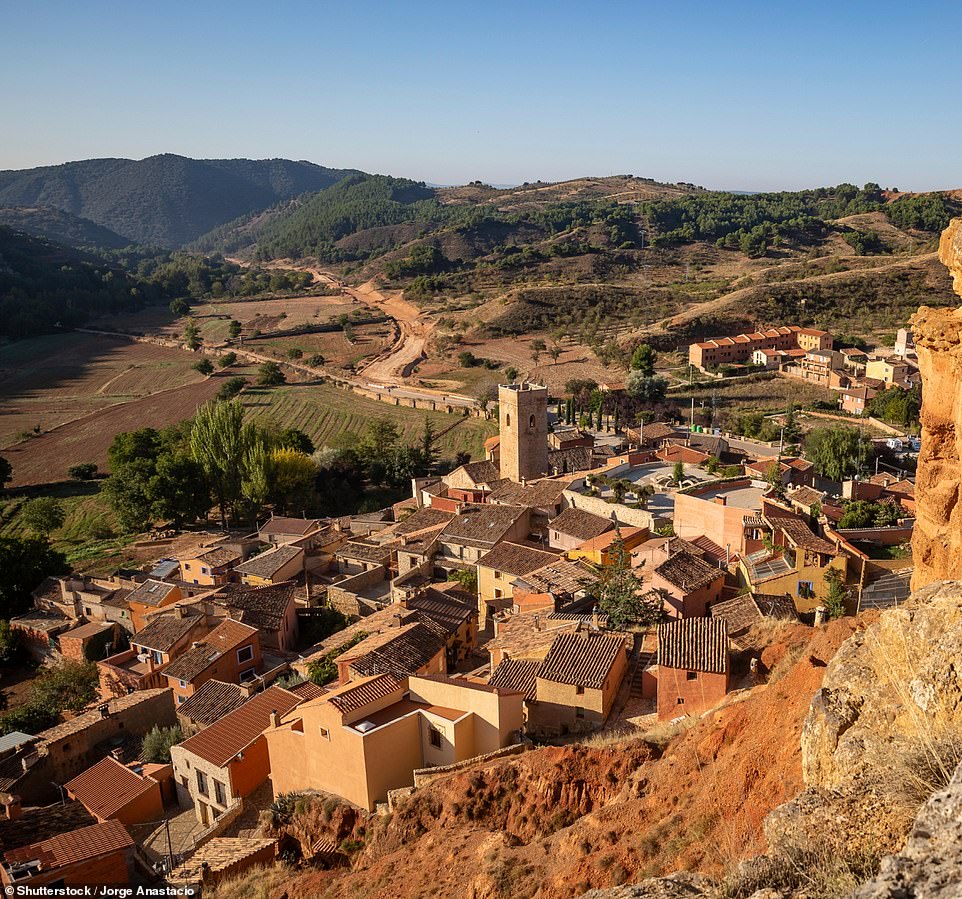 The 105 inhabitants of Anento, in the province of Zaragoza, keep their village well groomed and the Association says that it’s interesting to visit this charming hamlet at any time of the year 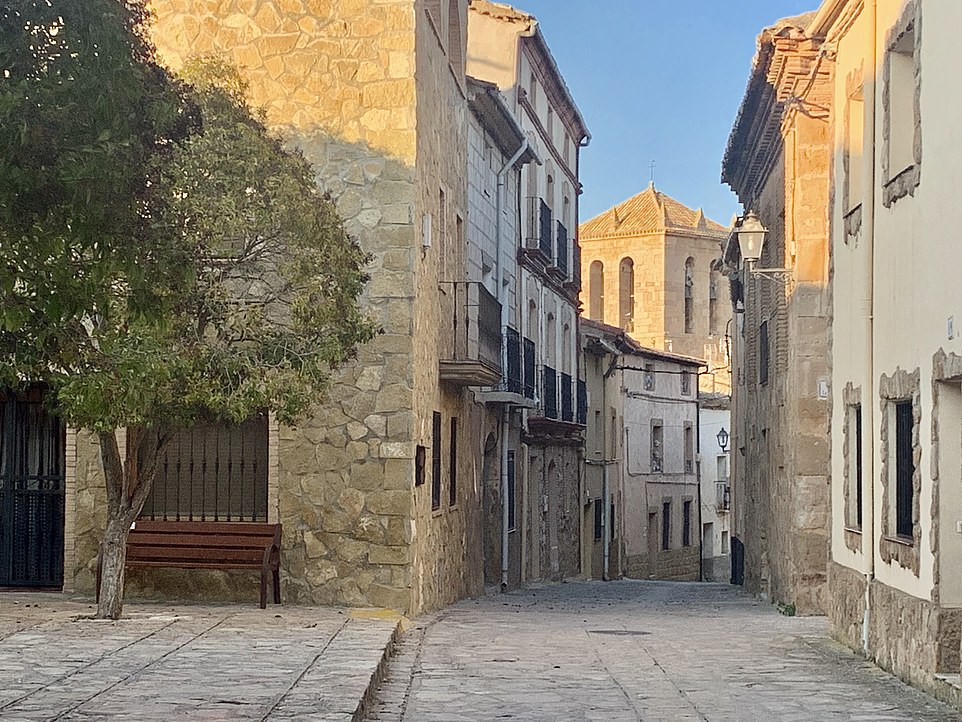