Cuddling monkeys, ‘Ghostface’ in a frozen lake and spectacular surfing: The awe-inspiring winners of a prestigious photography contest revealed

From a picture of a troop of snow monkeys in a group cuddle in Japan to a snowy lake resembling ‘Ghostface’ in Poland, these images unsurprisingly amazed the judges in a prestigious photo contest.

The One Eyeland Photography Awards 2021 set out to ‘crown the very best’ professional and amateur photographers around the globe ‘based on originality and quality of execution’.

Based in India, the photo-sharing site One Eyeland was founded by photographer Sharad Haksar in 2008. In its awards, an ‘illustrious jury comprising creative professionals from the fields of advertising and art’ were tasked with choosing the overall winners from over 3,300 images from 56 different countries.

Covering a broad range of photography styles, photographers were ranked in categories such as ‘Architecture – Cityscapes’, ‘Nature – Landscapes’ and ‘Sports – Extreme Sports’.

Other standout images that impressed the judges include a shot of a magical, misty picture of a castle in the Czech Republic, a glittering picture of Manhattan by night and a breathtaking picture of a surfer ‘inside’ a wave off the coast of Sydney.

Scroll down to see some of the spectacular winners and finalists… 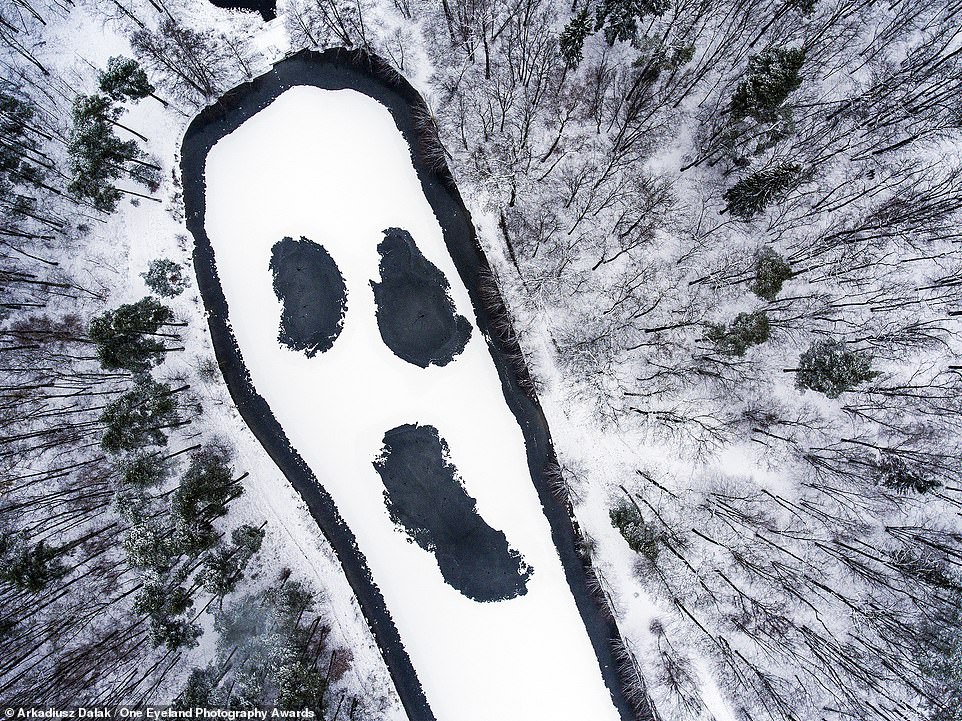 This haunting drone image is the work of Polish professional photographer Arkadiusz Dalak, snared in Lagiewnicki Forest in the Polish city of Lodz. Dalak says of the setting: ‘It is one of the largest forest areas within the city limits in Europe (it covers  1,205 hectares / 2,978 acres). When this shape appeared on the [drone] controller screen, I couldn’t believe my eyes!’ He notes that Norwegian painter Edvard Munch’s 1893 masterpiece The Scream ‘immediately came to mind’ when he took the picture, which is appropriately titled ‘Scream of the Forest’. Moviegoers, meanwhile, would also see the similarity with the Ghostface mask from the Scream franchise. Dalak adds: ‘It’s amazing what kind of images nature itself can shape! It’s as if the forest wanted to tell us something, or maybe shout out?’ The shot bagged a silver medal in the ‘Nature – Aerial’ category 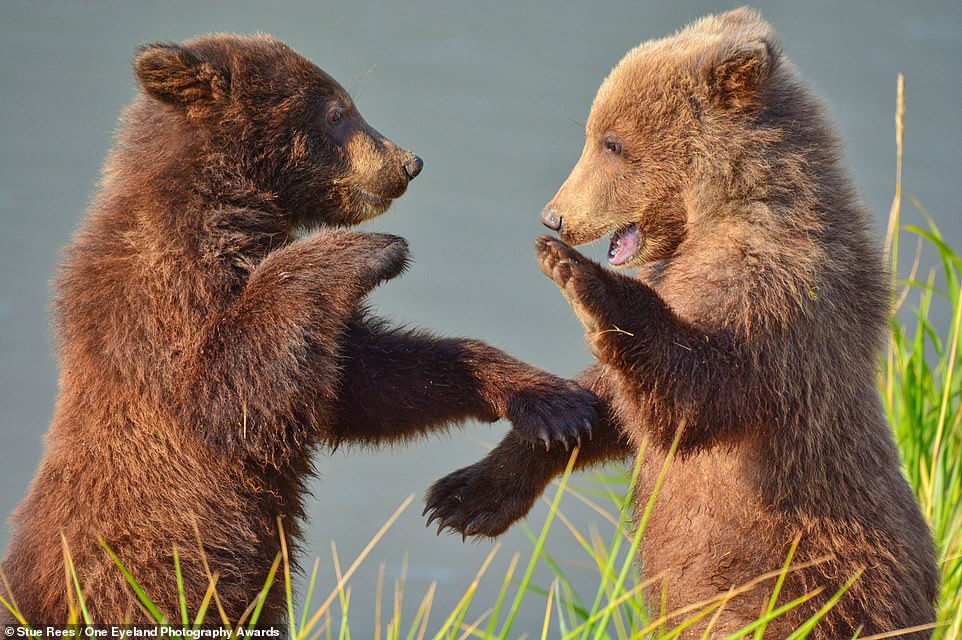 This adorable picture, which is part of a wider portfolio that won a bronze award in the ‘Nature – Wildlife’ category, is the work of New Zealand photographer Stue Rees. It shows two brown bear cubs ‘play fighting’ in Silver Salmon Creek in Lake Clark’s Cook Inlet in Alaska. Rees was also named ‘Photographer of the Year’ in the overall ‘Nature’ category 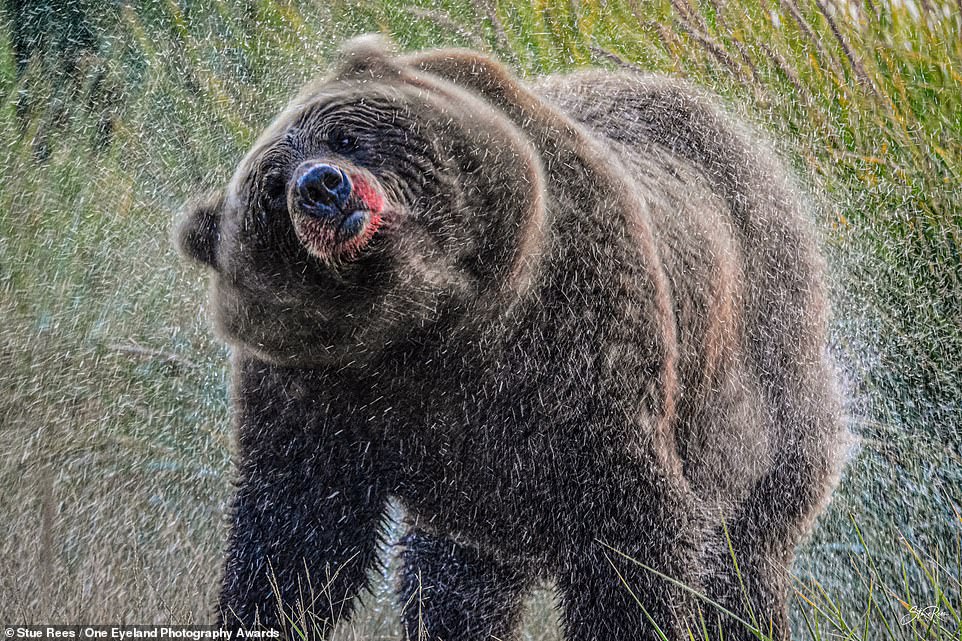 Above is another striking shot by professional photographer Rees, this time showing a brown bear ‘shaking down after feeding on salmon’ in the Katmai National Park and Preserve in southern Alaska 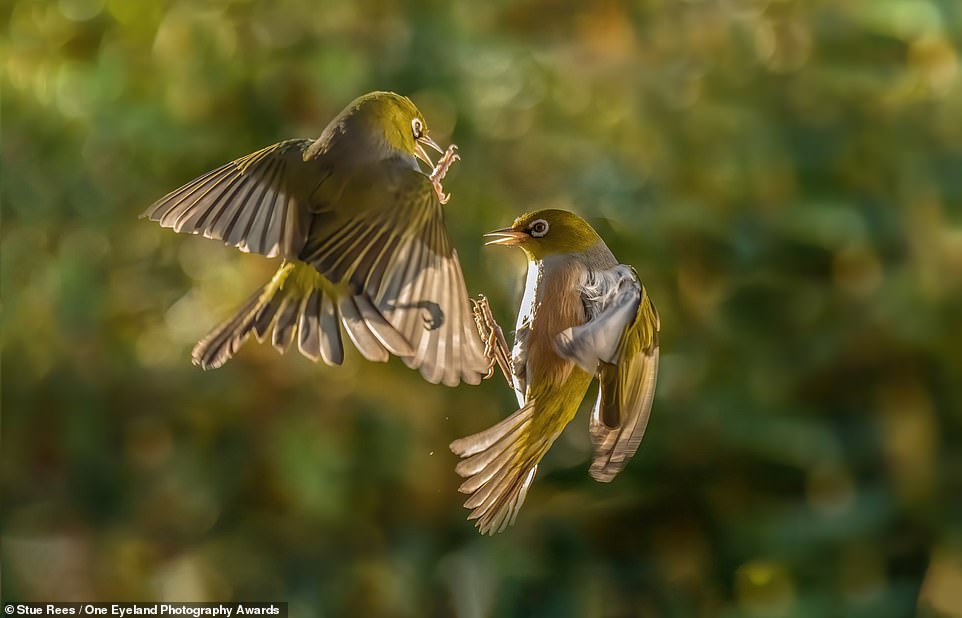 Above is a third photograph from Rees’ impressive portfolio, this time showing a pair of ‘courting’ silvereye birds in New Zealand 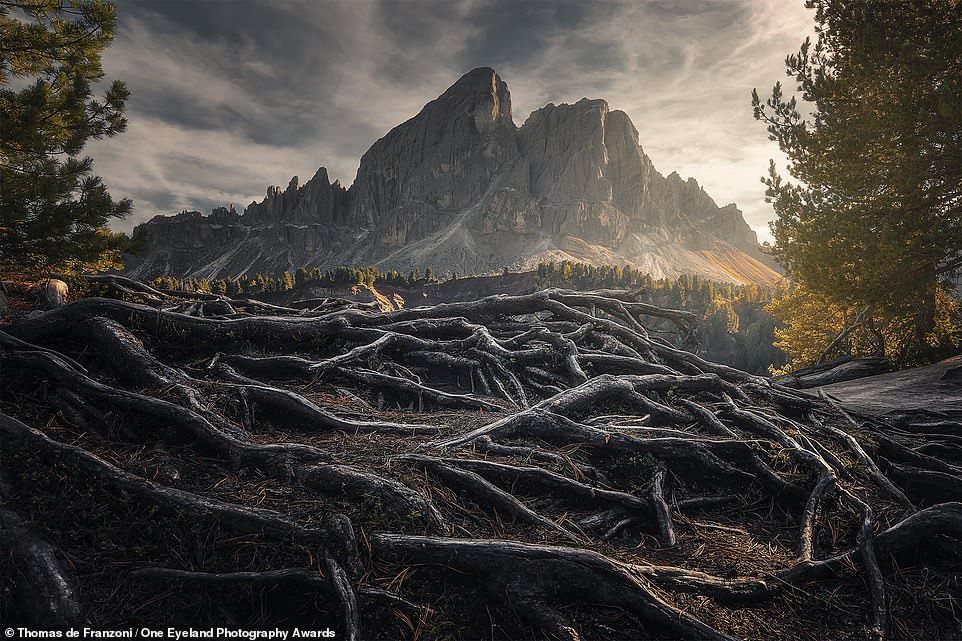 Amateur photographer Thomas de Franzoni behind the lens for this dramatic shot, which shows a scene in the Dolomites mountain range in his native Italy. It’s from a wider portfolio of work by de Franzoni, which earned a silver award in the ‘Nature – Landscapes’ category 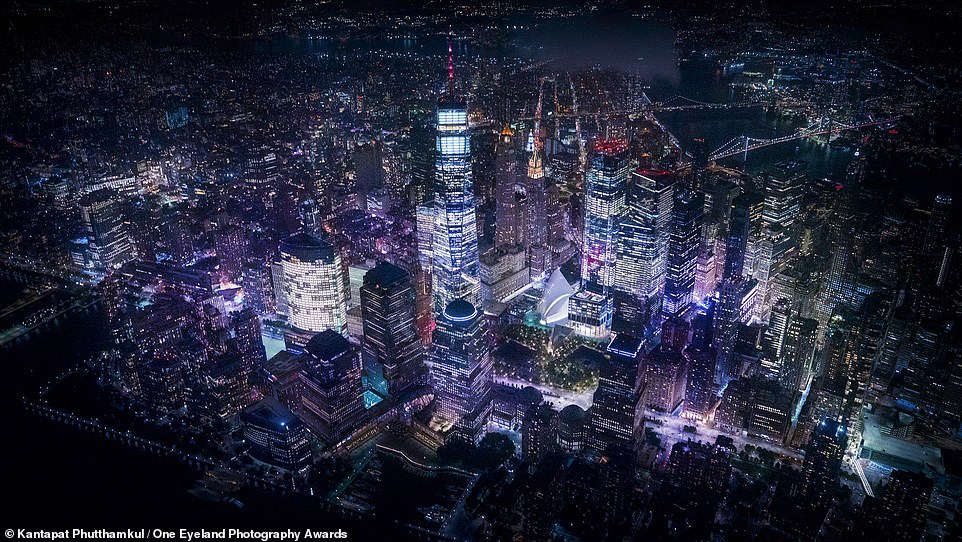 Professional photographer Kantapat Phutthamkul, who hails from Thailand, captured this mesmerising photograph of New York City. Unsurprisingly, it impressed the judges and earned a bronze award in the ‘Architecture – Cityscapes’ category 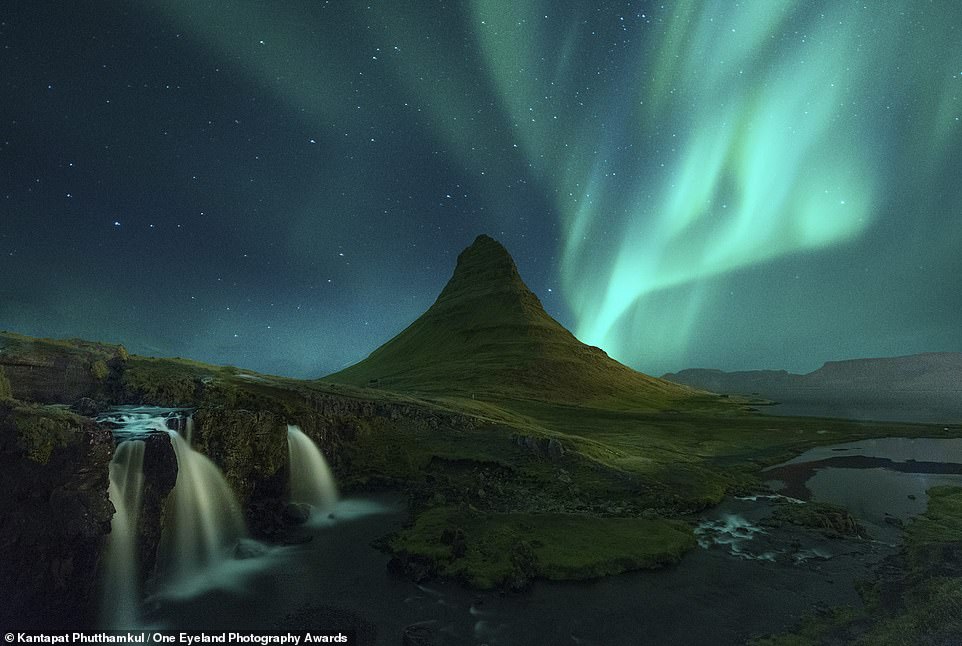 Phutthamkul also snared this magical shot of Kirkjufell, a 463m- (1,519ft) high hill, under the Northern Lights in western Iceland. Titled ‘Light Up The Sky’, the image landed a bronze award in the ‘Nature – Landscapes’ category 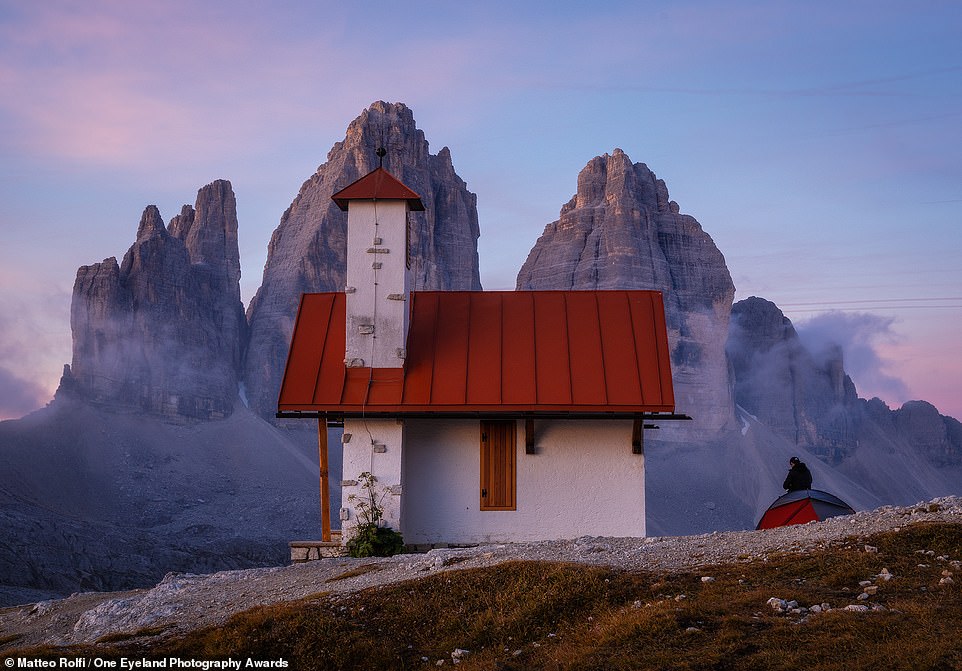 This mesmerising image of an Alpine church before the ‘Tre Cime di Lavaredo’ peaks in Italy’s Dolomites snapped up a bronze award in the ‘Nature – Landscapes’ category. Commenting on the shot, Swiss professional photographer Matteo Rolfi says: ‘Here I tried to frame the mountains a bit differently, looking for a not-so-common composition. The colour of the tent on the right was, by chance, perfectly matching the roof of this little church’ 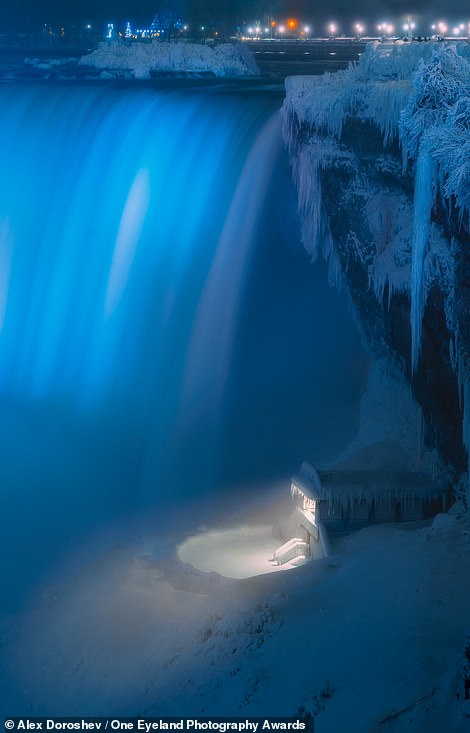 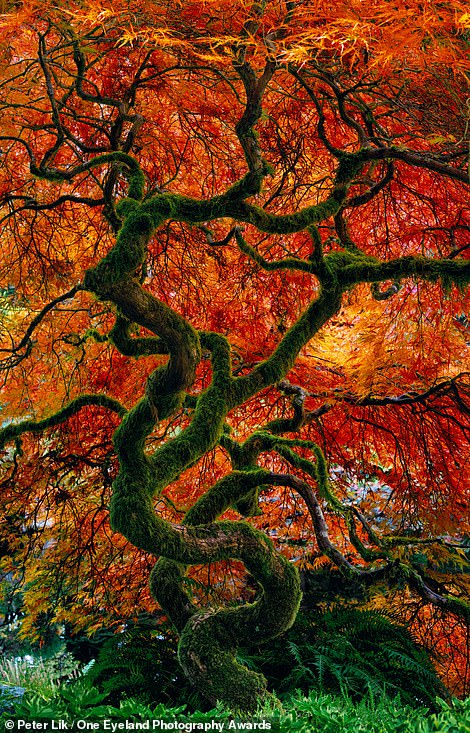 LEFT: Every evening beginning at dusk, the falls of Niagara Falls in Ontario, Canada, are illuminated in a multi-coloured light show. Canadian photographer Alex Doroshev captured this event in January of this year, the result of which is this enchanting photograph, which received a bronze award in the ‘Nature – Landscapes’ category. Amateur photographer Doroshev notes that there was ‘a lot of snow around and the falls [had] almost frozen after few days at -15/-20 degrees Celsius (five / minus four degrees Fahrenheit).’ RIGHT: U.S professional photographer Peter Lik captured this stunning autumnal shot, titled ‘Infinity Tree’, which nabbed a bronze award in the ‘Nature – Trees’ category 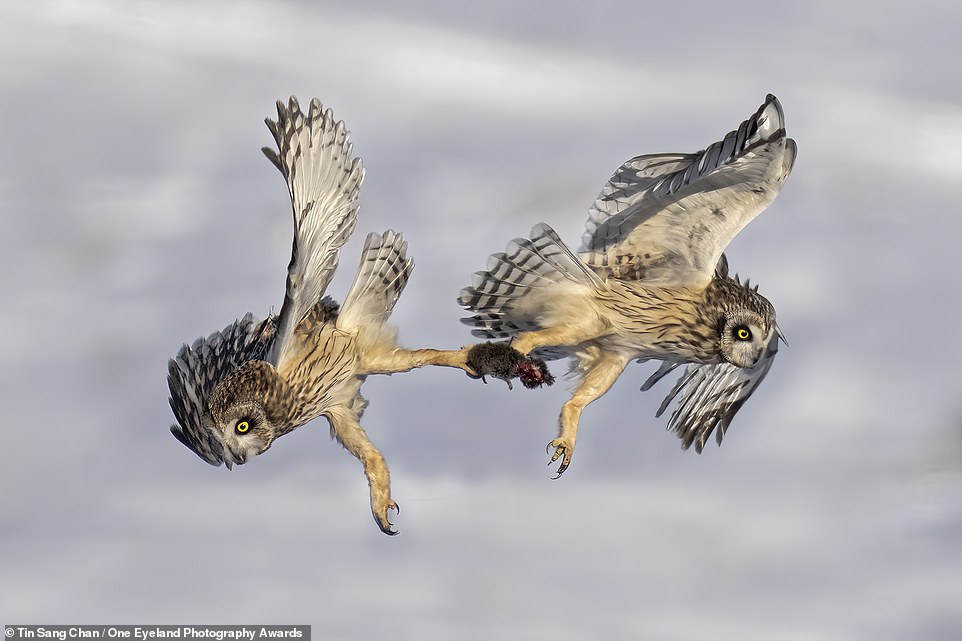 This powerful shot of two short-eared owls fighting over a vole was taken by Canadian professional photographer Tin Sang Chan. Catching the attention of the judges, it earned a bronze award in the ‘Nature – Wildlife’ category 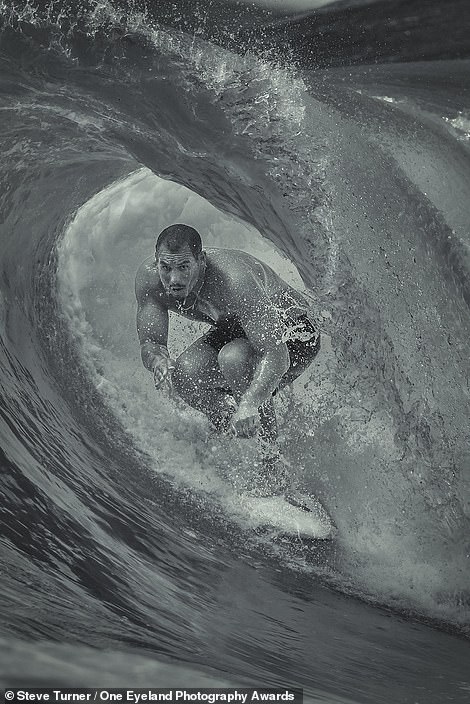 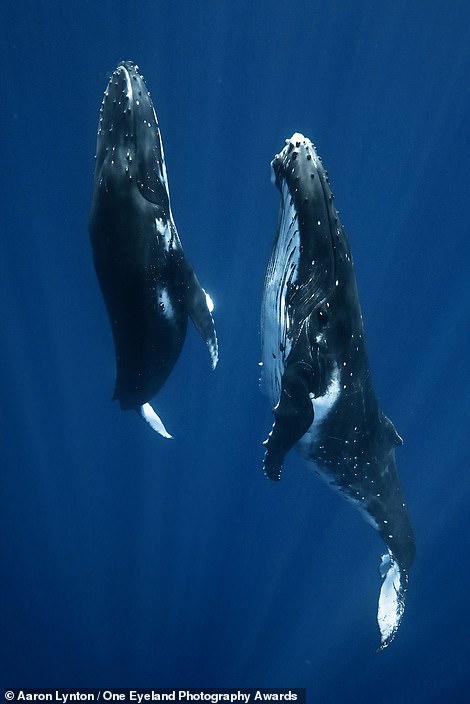 LEFT: Picking up a bronze award in the ‘Sports – Water Sports’ category, this dynamic photograph was taken by Australian photographer Steve Turner in January of this year on Maroubra Beach, Sydney. It shows local surfer Lukas ‘captured in that special moment of intense concentration’ while riding a wave, professional photographer Turner reveals. RIGHT: Describing this captivating shot, U.S professional photographer Aaron Lynton says: ‘Two sub-adult [an animal that is not yet fully adult] humpback whales dance and play in the clear waters of French Polynesia.’ Lynton’s picture earned a bronze award in the ‘Nature – Wildlife’ category 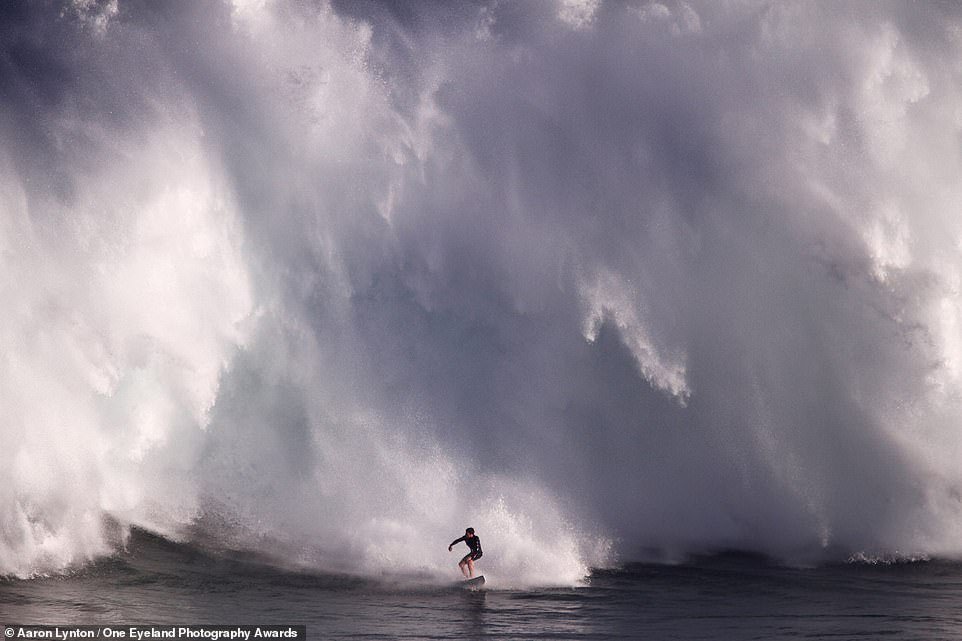 Lynton also captured this spectacular shot of professional surfer Nathan Florence, which was a finalist in the ‘Sports – Extreme Sports’ category. Sharing the story behind the picture, which was captured on Peahi beach on the north shore of Maui, Hawaii, Lynton says: ‘Nathan Florence was able to stick a heavy air drop [a surf move], but was forced to go straight. As the avalanche of white water exploded, it sent him cartwheeling underwater hundreds of metres’ 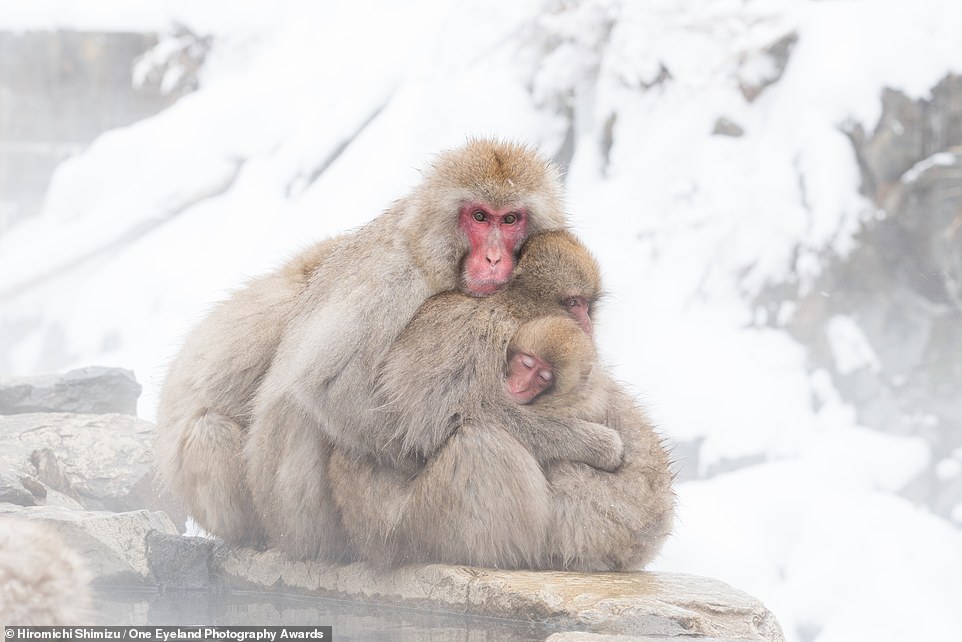 This heartwarming picture of a troop of Japanese macaques, also known as snow monkeys, in the ‘bitter cold winter’ claimed a bronze award in the ‘Nature – Wildlife’ category. Japanese amateur photographer Hiromichi Shimizu was behind the lens, and notes that the behaviour of the monkeys taught him ‘what [a] “bond” should be, which we humans must emulate’ 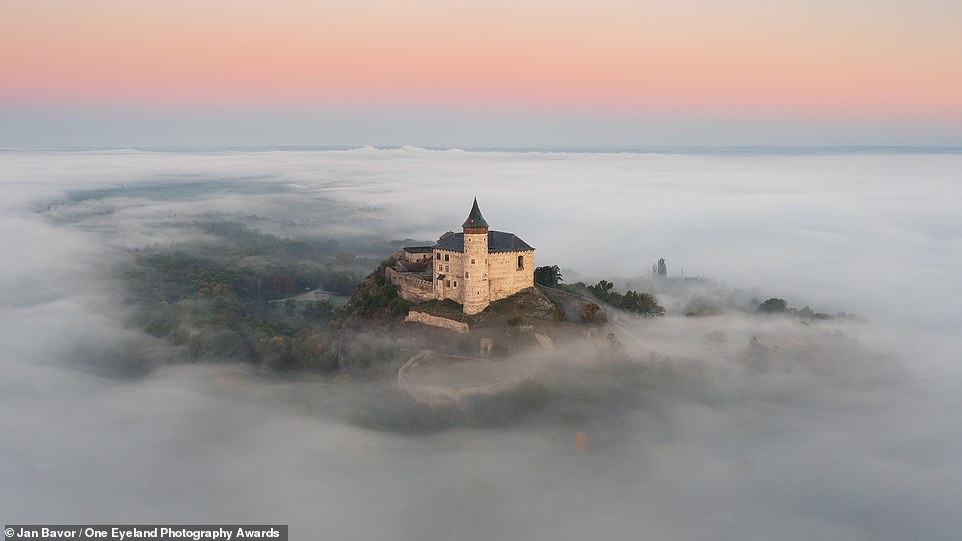 This magical shot – part of a portfolio that received a bronze award in the ‘Nature – Landscapes’ category – is the handiwork of Czech professional photographer Jan Bavor. It shows the mist surrounding Kuneticka hora, a 15th-century castle by the village of Raby in the Czech Republic’s Pardubice Region. In the awards, Bavor was also named the Czech Republic’s overall ‘Photographer of the Year’ 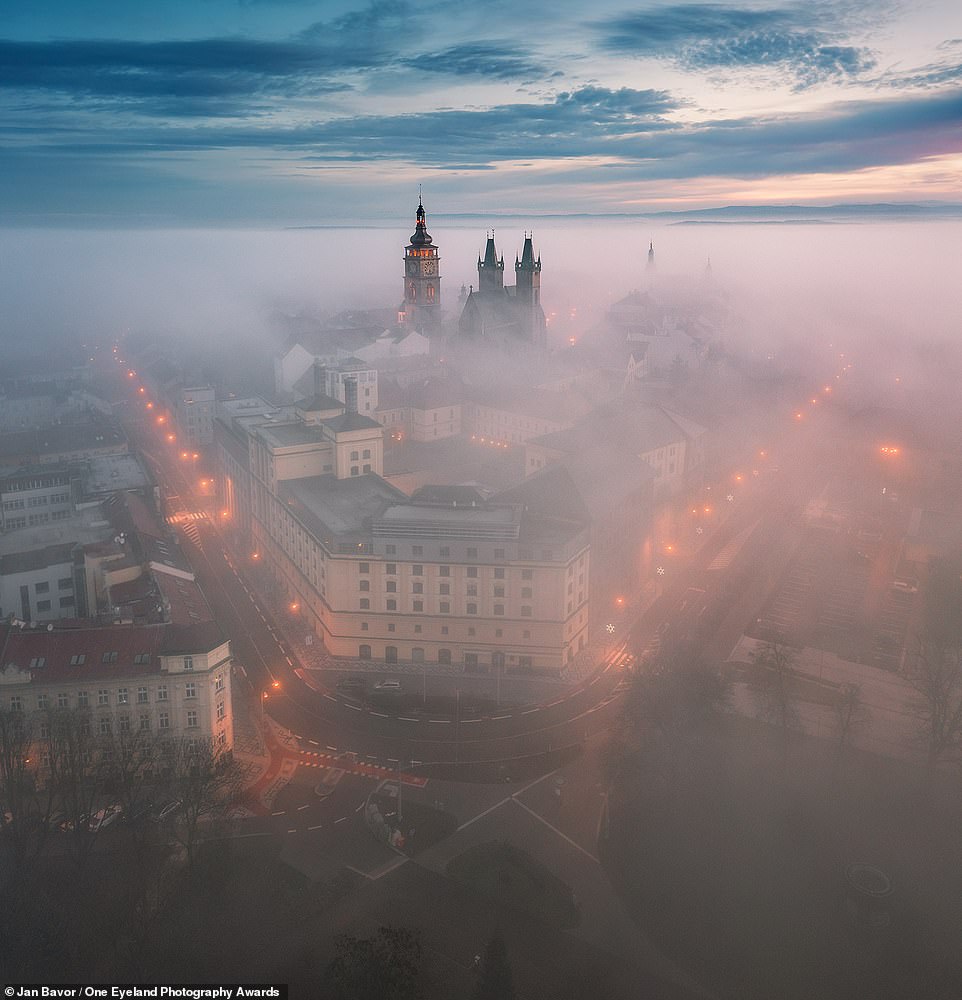 Bavor was also behind the lens for this beautiful picture of Hradec Kralove, a city in north-central Czech Republic. The city’s history is thought to date back to the 10th century 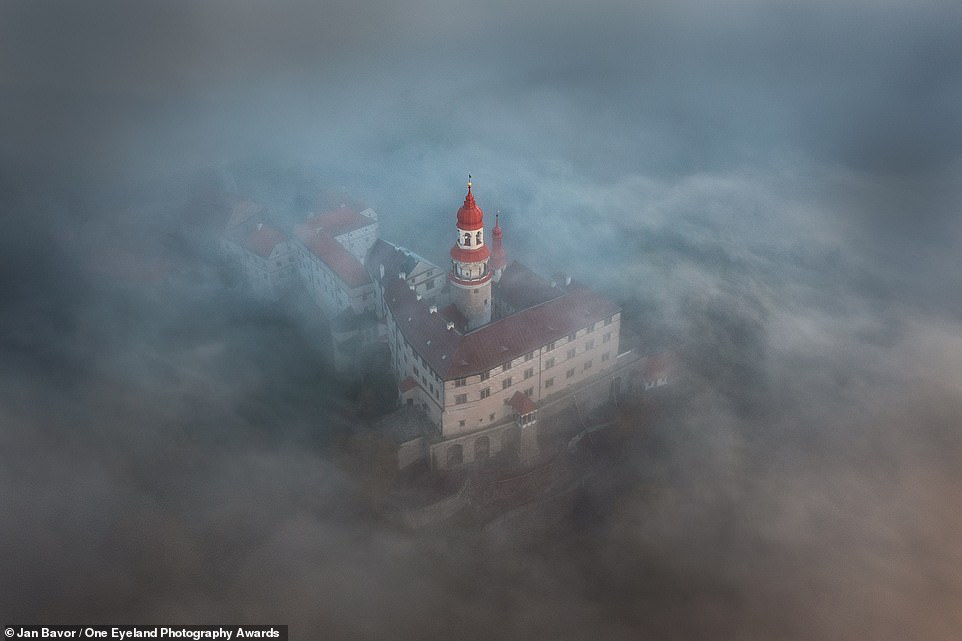 Above is yet another atmospheric, misty shot by Bavor, this time depicting Nachod Castle, a 13th-century fortress that lies near the Polish border in the Czech Republic 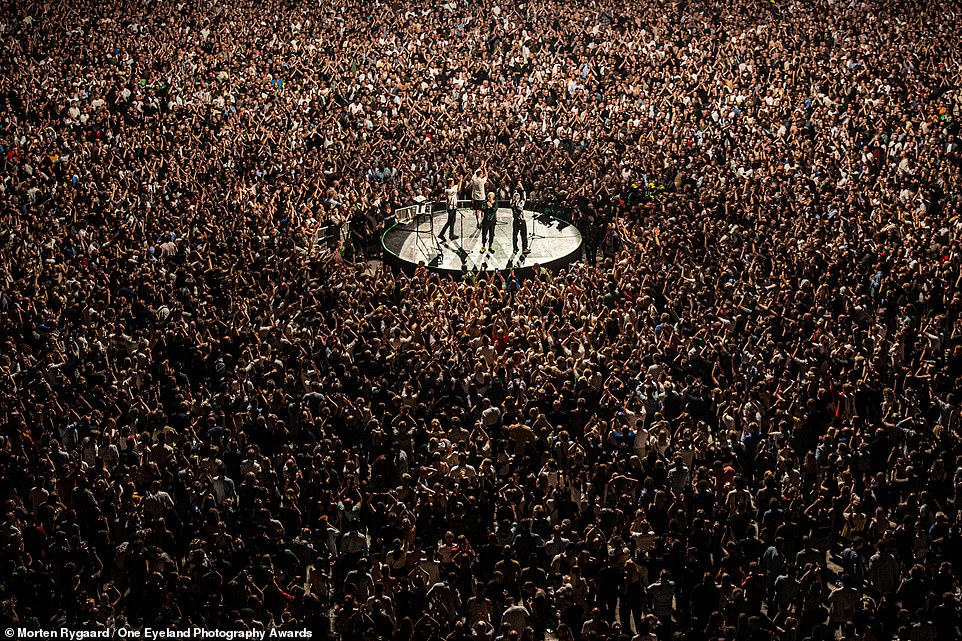 This striking photograph shows Danish post-punk band The Minds of 99 performing before a crowd of 50,000 people at Denmark’s Parken stadium last September. Danish photographer Morten Rygaard, who captured the shot, notes that the concert was the biggest show to take place in Europe in the wake of the pandemic. ‘The Minds of 99 gave people an experience they won’t forget soon,’ the professional photographer says. The picture was part of a wider portfolio that earned a silver award in the ‘Editorial – Photo Essay’ category