Blessed with green fingers and a determination to preserve the natural world, this is the extraordinary story of a man who has single-handily created a forest bigger than New York’s Central Park.

Jadav Payeng, who lives on Majuli in Assam, India – the world’s largest river island – was alarmed by the devastation caused to the land after a bout of extreme flooding and drought in 1979.

In a bid to prevent further erosion to his homeland, the then 16-year-old decided he would plant a sapling in the barren soil every day for the foreseeable future and now, 39 years on, his woodland covers 1,360 acres (Central Park measures 840 acres in comparison) and it is home to Bengal tigers, rhino, vultures and 115 elephants.

Jadav Payeng, who lives on Majuli in Assam, India – the world’s largest river island – started planting trees 39 years ago in a bid to stop erosion and as a result, there is now a lush forest on what was once a barren patch of land. Above, the environmentalist stands next to the first tree he planted 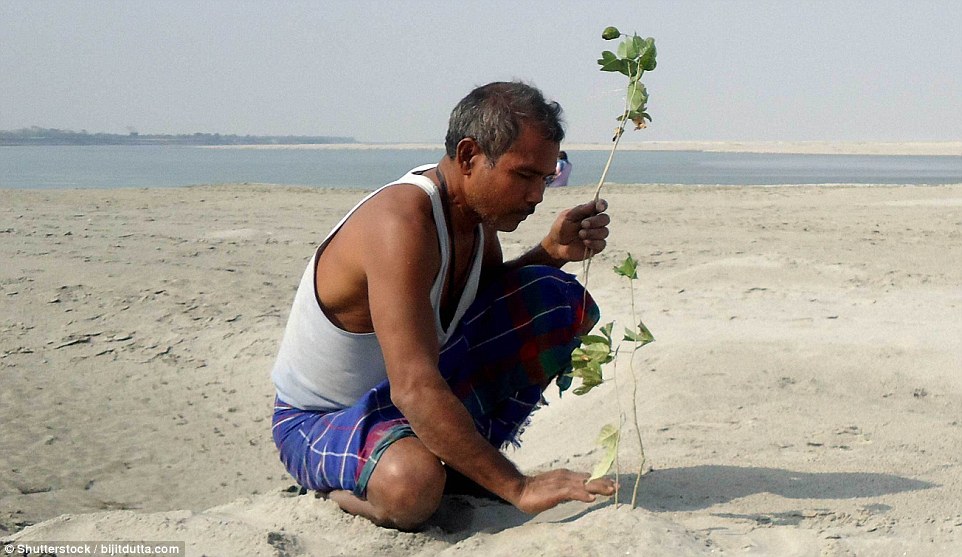 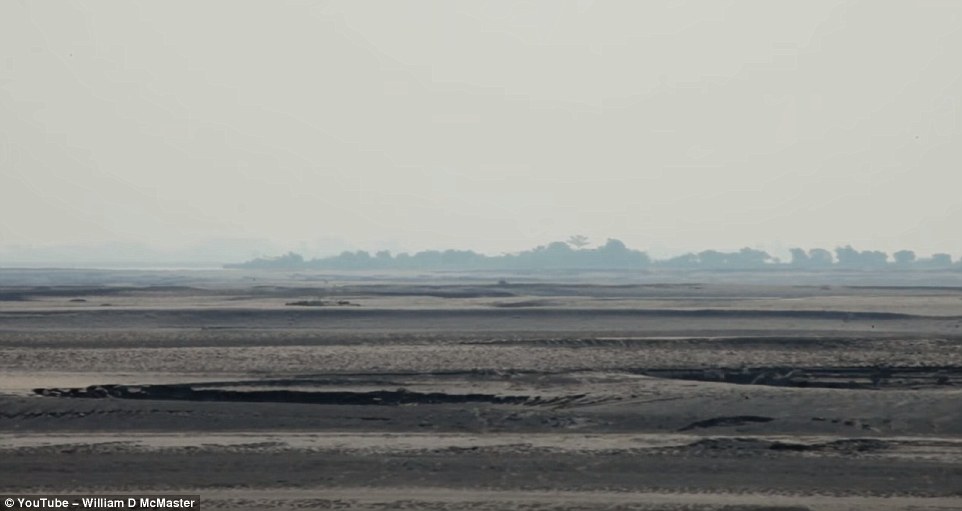 An image shows what the landscape on Majuli island typically looks like, with sandy soil gradually eroding

Amazingly, the father-of-three’s endeavours didn’t come to light until the autumn of 2007, when he was accidentally discovered seeding his forest by photo journalist and wildlife enthusiast Jitu Kalita.

Kalita had hired a boat to take pictures of birds around the Brahmaputra river, which flows around Majuli Island, and while paddling through the shallow waters he spotted something unusual.

Telling his story in the documentary Forest Man, which has amassed more than 2.7million views on YouTube, Kalita recalls: ‘I saw something strange… it looked like a forest far in the distance.

‘I began walking towards it and when I reached it I couldn’t believe my eyes. I had found a dense forest in the middle of a barren wasteland.’

Payeng said he thought Kalita was a poacher when he first spotted him, on the hunt for rhinos or tigers, but he was surprised to learn that his visitor was in fact a journalist.

Kalita was fascinated by Payeng’s story and spent time learning about his lifetime’s work. 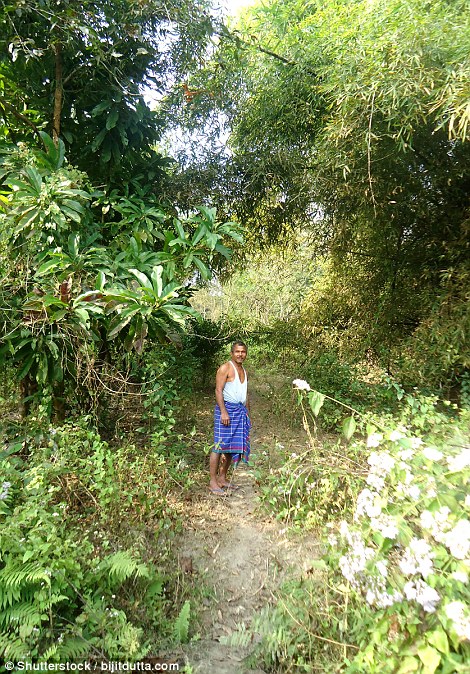 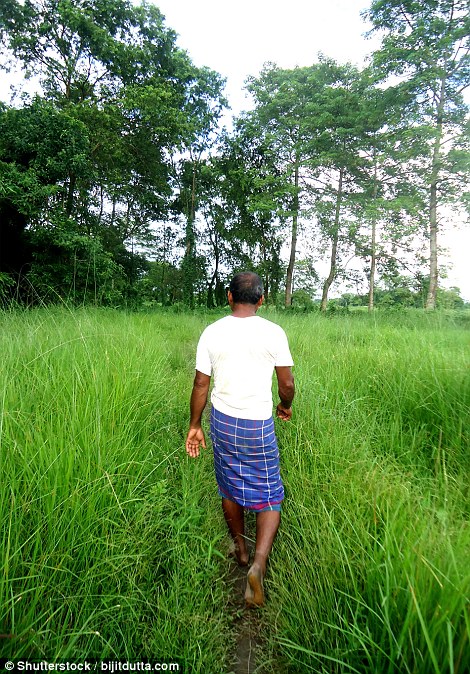 Payeng, who makes money with his wife by selling cow’s milk to local villages, remains dedicated to his forest and says he will continue to plant until his ‘last breath’ 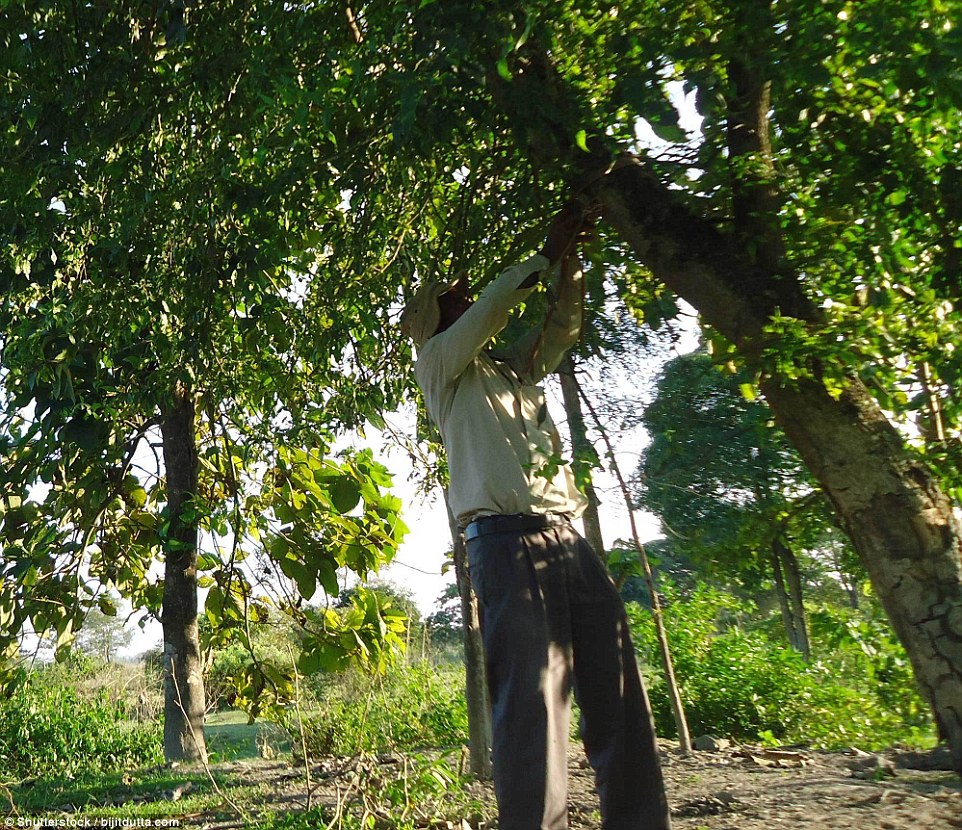 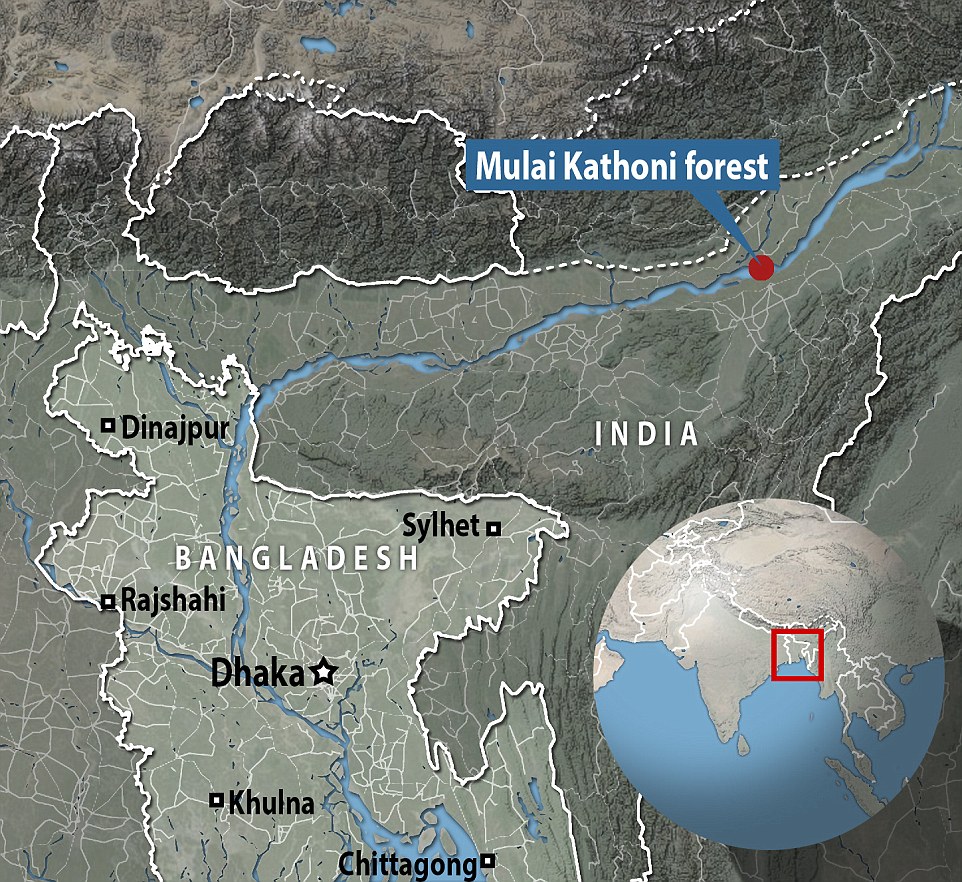 He went on to publish an article in a local paper that was then picked up nationally and Payeng was soon lauded as the ‘Forest Man of India’.

Payeng, who makes money with his wife selling cows’ milk to local villages, remains dedicated to his forest and says he will continue to plant saplings and seeds until his ‘last breath’.

He said at first that planting was very time consuming but now it’s much easier because the trees seed themselves.

Meanwhile on the wildlife front, stocks have flourished naturally.

But now the difficulties Payeng faces include threats from poachers and illegal loggers.

He mused: ‘Humans consume everything until there is nothing left. Nothing is safe from humans, not even tigers or elephants. 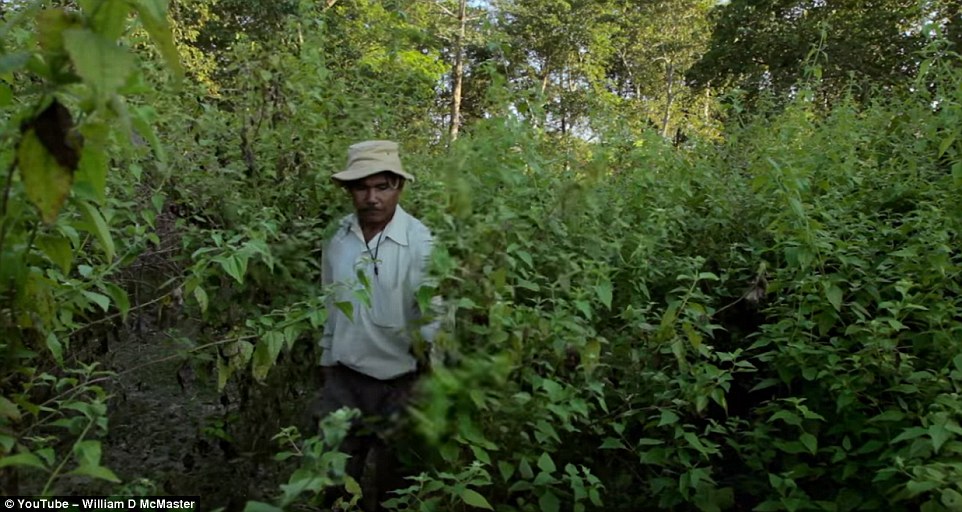 Payeng said at first, planting was very time consuming but now it’s much easier because the trees seed themselves 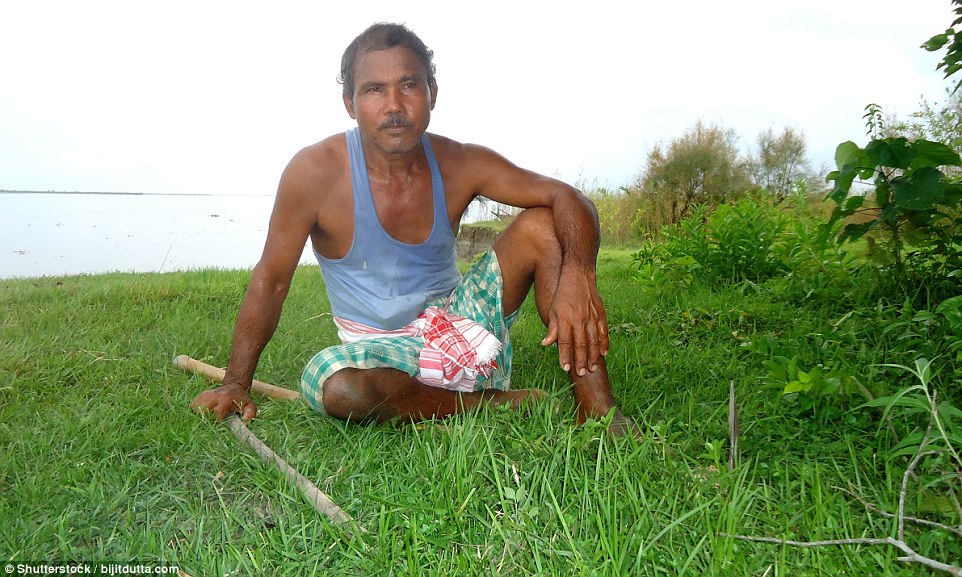 Payeng’s work has been recognised far and wide and in 2015, he was honoured by the Indian Government with a Padma Shri civilian award. Many scientists have also highlighted Payeng as an example to follow

‘I tell people, cutting those trees will get you nothing. Cut me before you cut my trees.’

Payeng’s work has been recognised far and wide and in 2015, he was honoured by the Indian Government with a Padma Shri civilian award.

Many scientists have also highlighted Payeng as an example to follow.

Dr Arup Kumar Sarma from the Indian Institute of Technology said: ‘Payeng has already shown the example that if one person can, at his own effort, do this kind of plantation, then why not others.’

Payeng says his dream is to fill up Majuli Island with forest again, with 5,000 acres being his goal.

The environmentalist, who is in his late 50s, explains in another documentary highlighting his work – the Voice of Trees – that he gets up every morning around 3am before taking a boat and a bike ride to his special forest, which is known as Mulai Kathoni.

He says the lifestyle in the area where he lives is pretty blissful, with little stress. 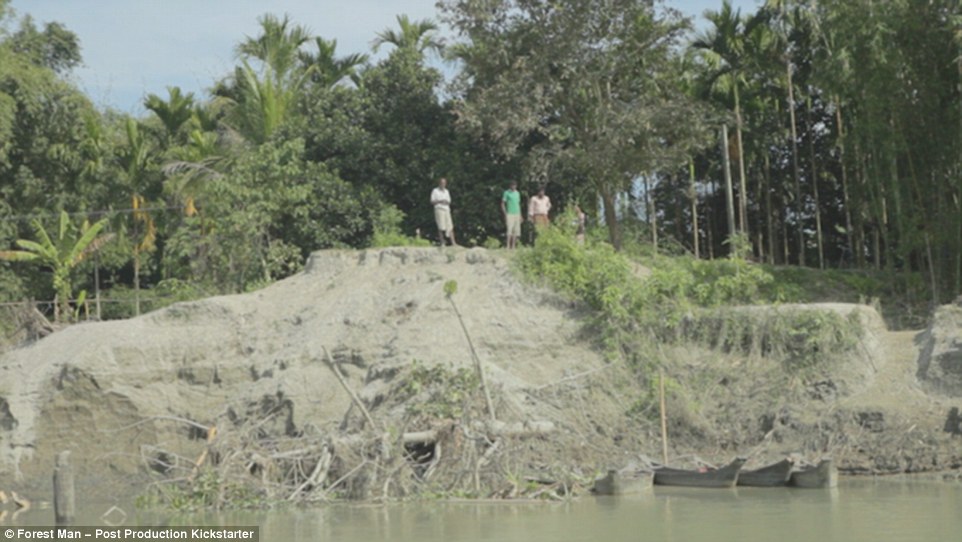 This image shows how erosion impacts the island of Majuli, with the riverbanks slowly slipping into the water 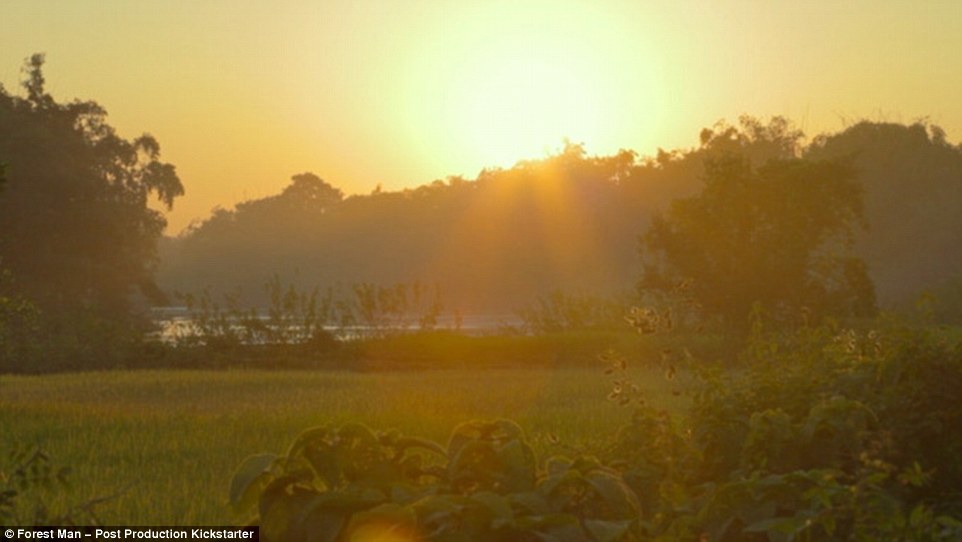 Payeng says his dream is to fill up Majuli Island with forest again, with 5,000 acres being his goal

Payeng says this is in stark contrast to the bustling metropolises where people have little time to think about the world around them.

He says: ‘Things are different in concrete forests (cities). Those people sit in air conditioned rooms unmindful of the pollution created outside.

‘People are fighting with each other, people here don’t fight. They do their work, eat their food, breath oxygen and live in peace.’

In a short film by 101 India titled The Man Who Planted A Forest, Payeng reveals that he can still locate the first tree that he planted, with its solid frame now towering above him.

Standing next to the tree and patting its thick trunk, he concludes: ‘Without you, I would not have seen the outside world.

‘People from all across the globe come here now because this forest amazes them.’