‘In the right weather it can look like the Maldives’: Incredible pictures of Cornwall by a local photographer who says it’s the UK’s most beautiful spot (though he admits he’s biased)

Is there a more beautiful place in the UK than Cornwall?

Photographer Liam Alford doesn’t think so and he’s got stunning pictures that do a great job of backing up his opinion.

Liam, 36, only began taking photographs of his home county five years ago, when he bought his first DSLR camera. Today, his photography kit has expanded to include a drone, which he uses to take some of his most dramatic snaps, and he often gets up at 4am so he can photograph landmarks in just the right weather conditions or at first light.

Liam, who works as a baker making pasties – a Cornish delicacy – says: ‘Cornwall is the most beautiful part of the UK. I’m slightly biased as I’ve lived here my whole life, but it has everything to offer a photographer. The beautiful rugged west to the beautiful fishing towns of the south coast.’

He adds: ‘With the right angle and weather conditions, Cornwall can look like the Maldives. I get a lot of people asking me if my photos are really taken in Cornwall.’

Here, we showcase 15 of Liam’s shots, taken everywhere from the iconic Saint Michael’s Mount in West Cornwall to the surf haven of Newquay in the north. 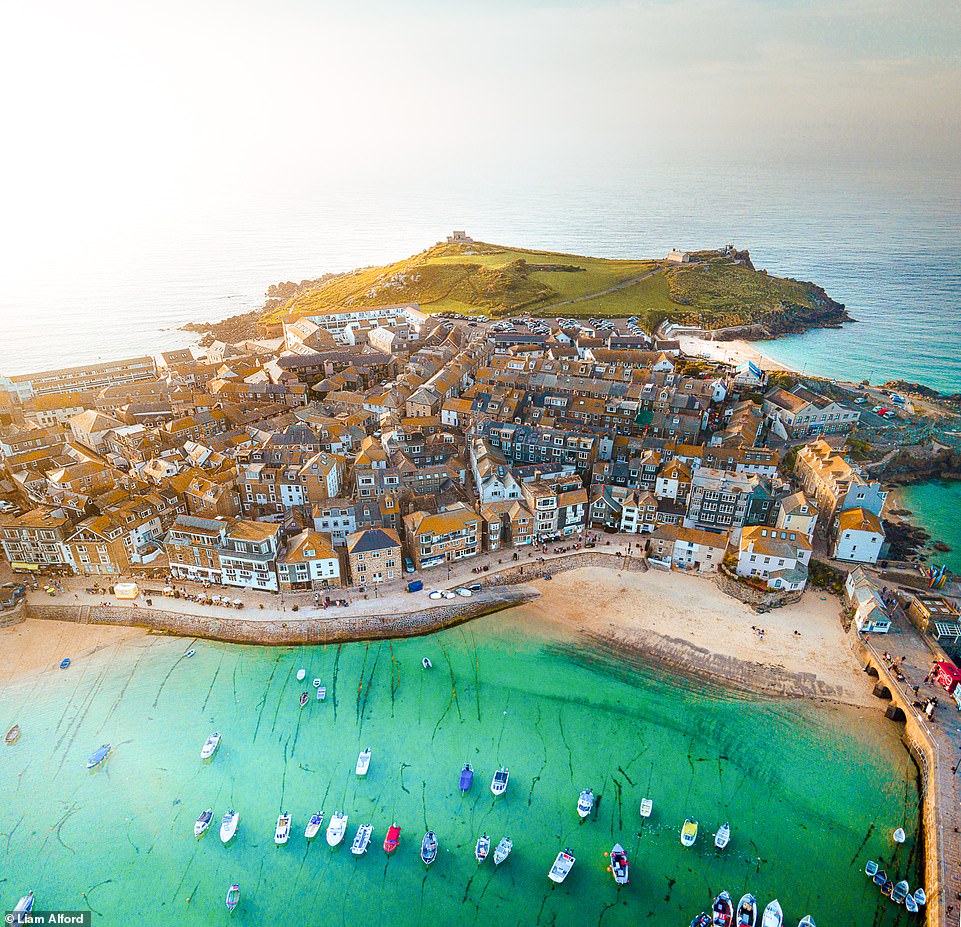 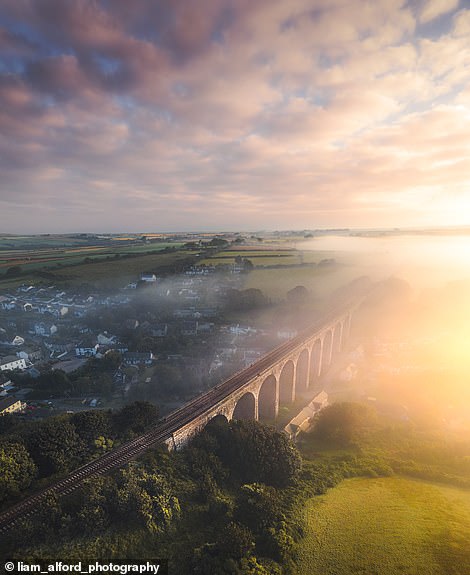 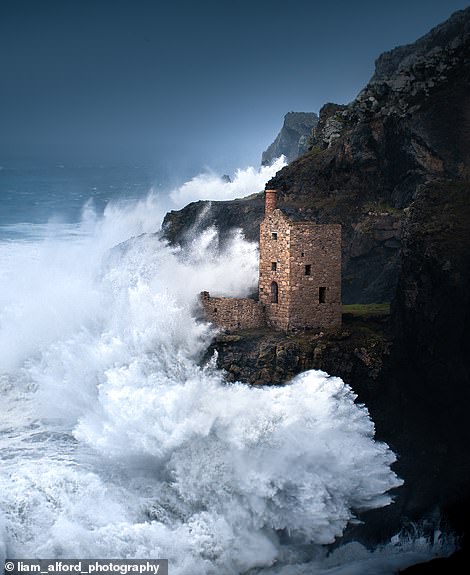 LEFT: This stunning image showcases Angarrack Viaduct at sunrise. Liam, who says it was one of the best sunrises he’s ever witnessed, recalls: ‘The mist didn’t last long and had all but gone by the time I flew the drone back.’ RIGHT: In this jaw-dropping shot, an old engine house on the coast near Botallack is pummeled by waves in a storm. Liam pays careful attention to weather conditions in order to capture the perfect photograph. He says: ‘I’m constantly checking multiple weather and surf apps to see what the conditions are doing.’ He admits that keeping his equipment dry can be quite a challenge when shooting in storms 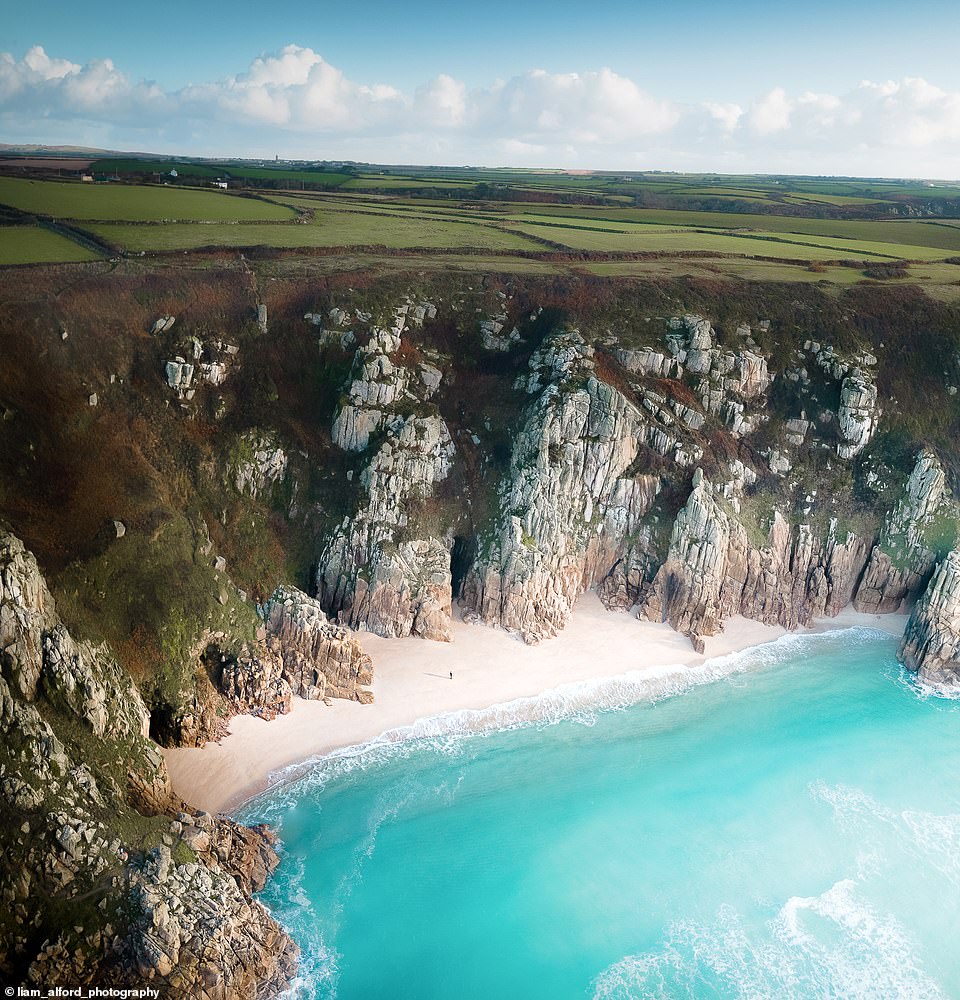 This mesmerising shot was taken at first light on the west coast of Cornwall. Liam says: ‘I set off in the pitch black with horrendous rain for this one. Once the rain clouds had cleared it turned into a nice morning. Optimism is key’ 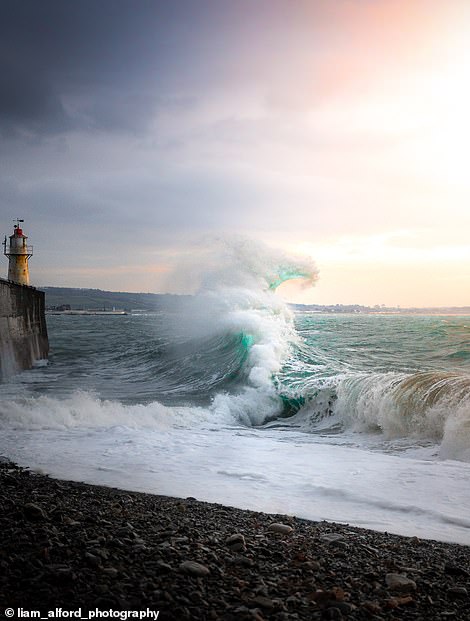 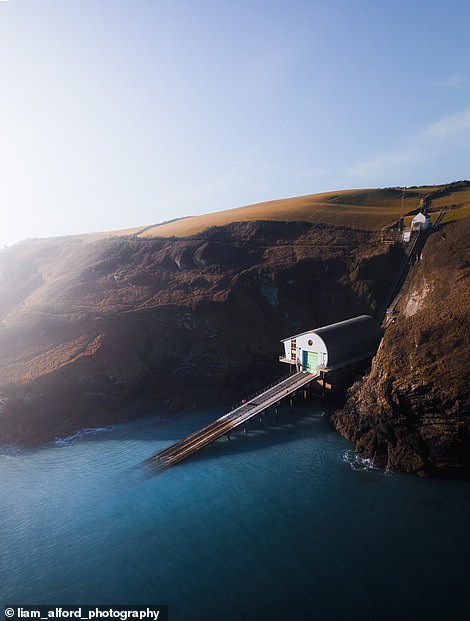 LEFT: Titled Dancing At Dawn, this shot was taken at Newlyn Harbour. Liam says: ‘When big waves roll in and the winds are in the right direction you can always count on Newlyn’s harbour wall to put on a good show.’ RIGHT: This spellbinding photograph features the Lizard Lifeboat Station in Kilcobben Cove. Liam calls this building ‘a brilliant feat of engineering and design’ 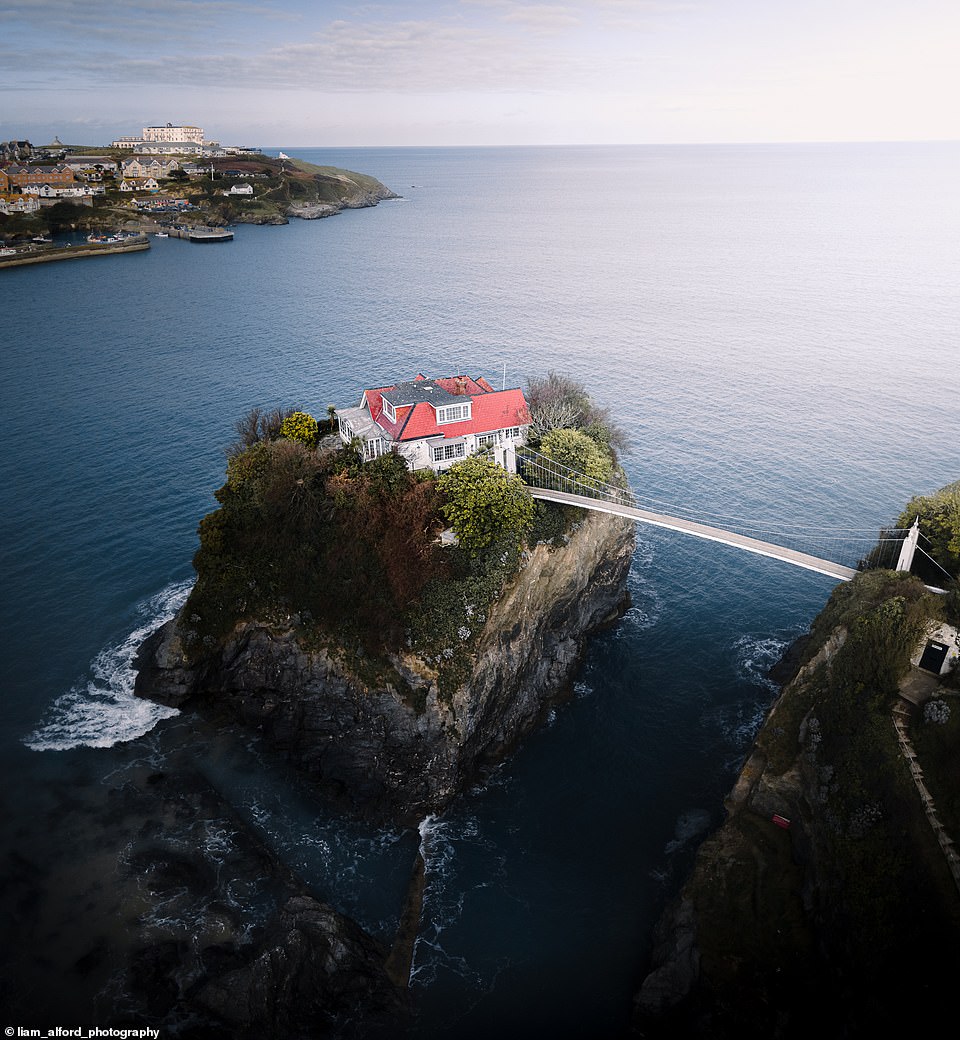 ‘Don’t mind me guys, just scoping out my dream house,’ Liam wrote when he posted this shot of a clifftop Newquay beach house on his Instagram feed. Liam says that his drone photography is a ‘constant work in progress’ and that he consistently experiments with different heights and shutter speeds 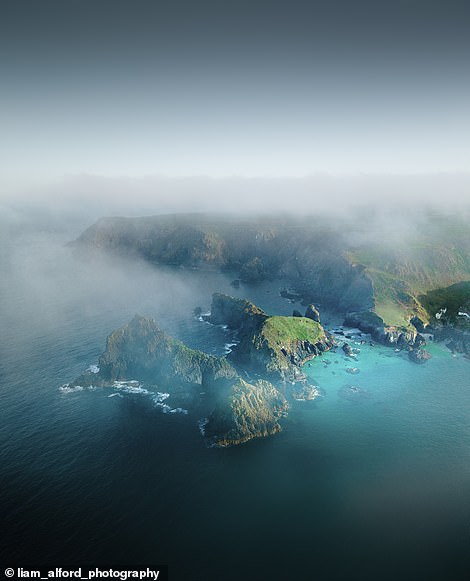 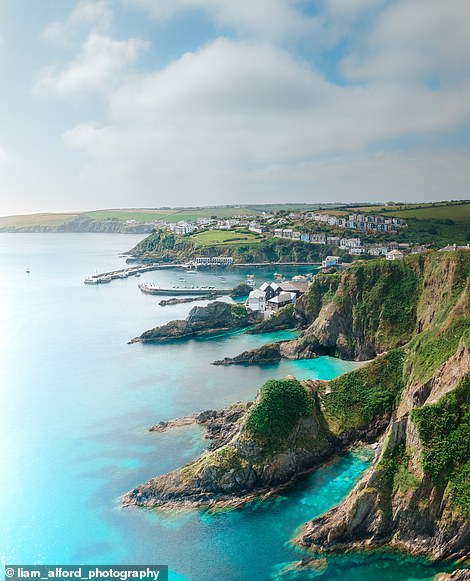 LEFT: This atmospheric image was taken early one summer morning at Kynance Cove in South Cornwall. Liam says: ‘I was surprised to have the entire place to myself. You can imagine my delight when a sudden flurry of sea mist rolled through for about five minutes. It still amazes me how diverse the landscape here is in Cornwall.’ RIGHT: This blue-hued shot was taken on Cornwall’s south coast near the village of Mevagissey. Liam says: ‘If heaven does exist, it’s just past Mevagissey’ 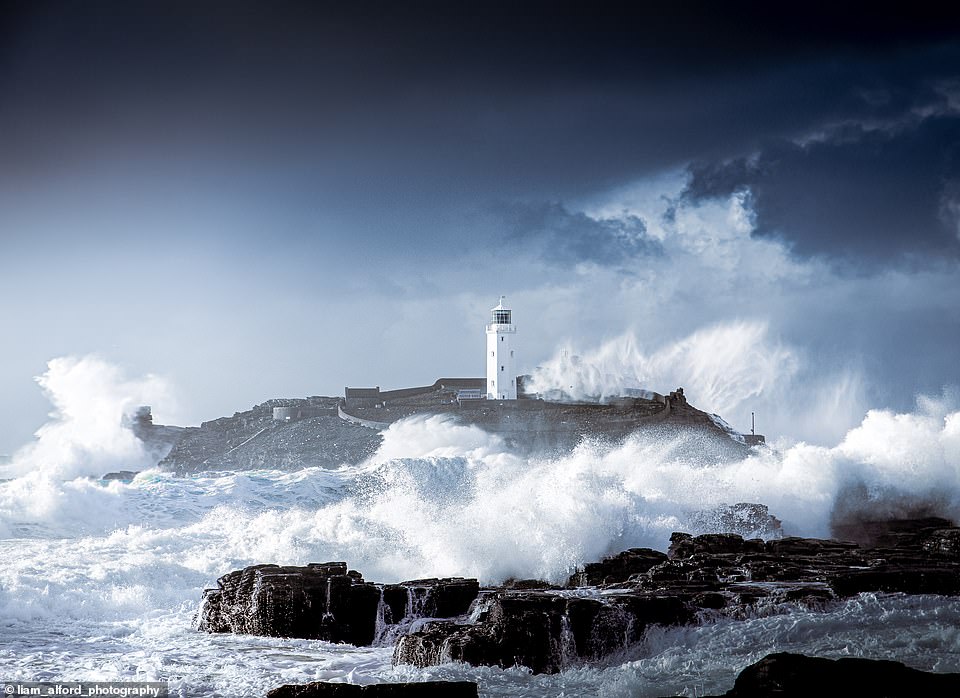 Liam counts this stormy image of Godrevy Lighthouse as one of his all-time favourites. He took his dog with him on this shoot and he recalls fondly how they both got drenched in the process of taking the photograph. He says: ‘After getting caught in the worst rain/hail shower and cowering behind the lifeguard hut we finally made it on to the beach. I got to work straight away as the conditions were epic. And the doggo got to work digging trenches and trying to eat stones’ 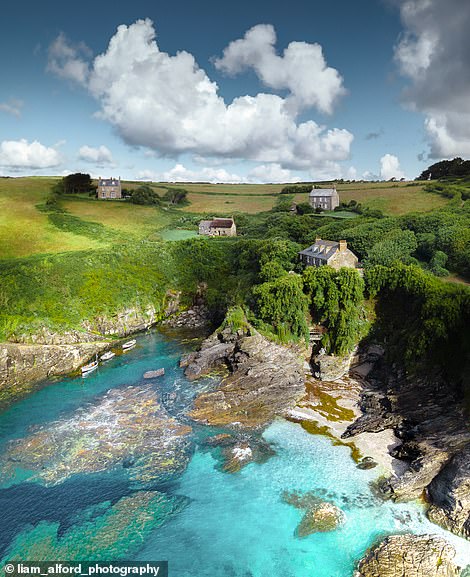 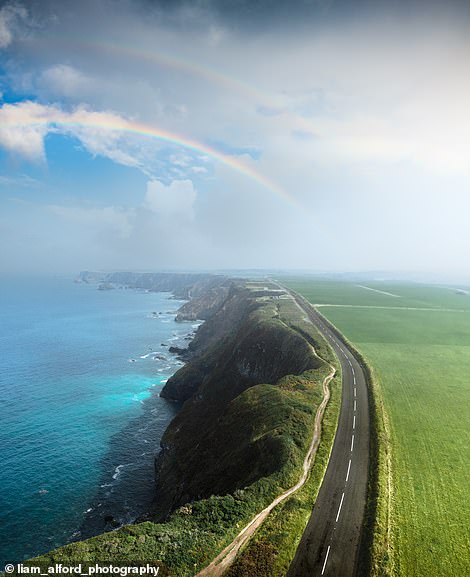 LEFT: Wittily titled ‘From Prussia with Love’, this image depicts Prussia Cove in West Cornwall. Liam explains: ‘Prussia Cove is famous for being home to the Carter family in the 18th century. The Carter brothers were notorious smugglers and all seven of them appear in old records for their exploits.’ RIGHT: In this shot, a rainbow arches over a section of the coastal road that links Portreath to Hayle on the north coast. Liam says: ‘Cornwall’s coastal roads can rival most places in the world’ 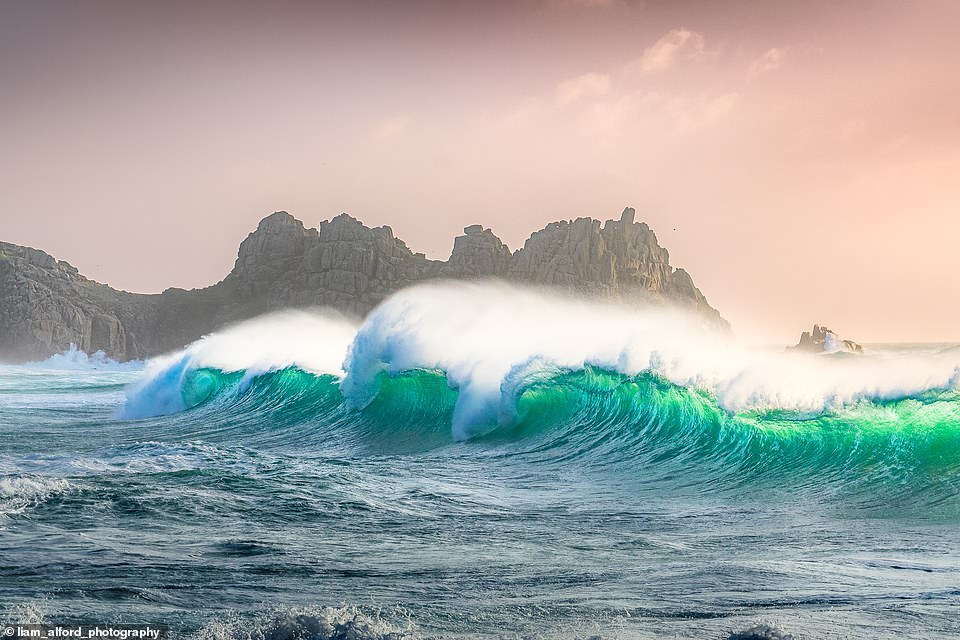 Waves crash off the coast of Porthcurno Beach in this shot. Liam explains: ‘I took this just as the sun was emerging. I had to be quick [in taking the photograph] as once the sun was fully out it almost became too harsh for what I wanted to achieve’ 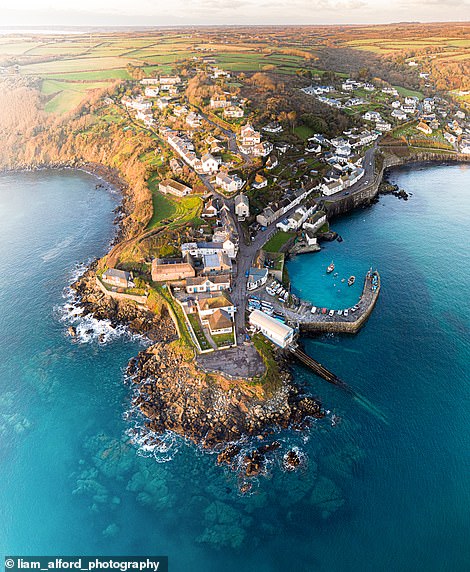 LEFT: Liam admits that this shot of Cornwall’s iconic St Michael’s Mount landmark took a little patience to capture – he had to spend some time waiting for the right light. He recalls: ‘This particular evening was super moody and there was the smallest of openings in the sky for the sun to squeeze through.’ RIGHT: This shot captures the village of Coverack on the Lizard Peninsula. Liam reveals: ‘For me, this is one of my favourite Cornish fishing villages and from above it’s even more impressive. Built on a tiny stretch of rocks, the village perches almost precariously. I can only imagine what it’s like when big storms hit’